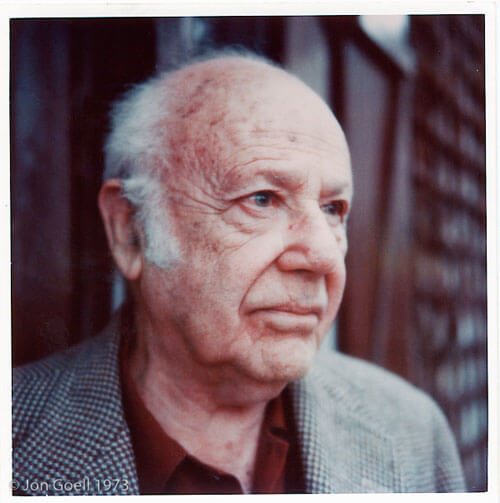 Country: United States | Born: 1890 - Died: 1976
Paul Strand was born in New York City. As a teenager, he was a student of renowned documentary photographer Lewis Hine at the Ethical Culture Fieldston School. A visit to Gallery 291 (owned by Alfred Stieglitz) proved to be a strong influence on Strand, who began to take photographs of his own. He experimented with abstraction but also used his camera as a means to promote social reform. Alfred Stieglitz praised these early efforts and featured Strand's work in his gallery and in his magazine Camera Work. In the early 1920s, Strand began to work in motion pictures as well as still photography. In June 1949, Strand left the United States to present a film in Czechoslovakia, an event which marked the beginning of his self-imposed exile overseas due to the prevailing climate of McCarthyism in America. He settled in Orgeval, France and in the ensuing years photographed extensively, and also produced six book "portraits" of places: Time in New England (1950), La France de Profil (1952), Un Paese (1955), Tir a'Mhurain / Outer Hebrides (1962), Living Egypt (1969) and Ghana: An African Portrait (1976). Strand died in 1976.
Source Robert Mann Gallery
Galleries:
Robert Mann Gallery
Weston Gallery
Howard Greenberg Gallery
Share:
Selected Books: 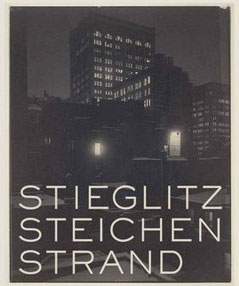 Stieglitz, Steichen, Strand
Author: Malcolm Daniel
Publisher: Metropolitan Museum of Art
Year: 2010 - Pages: 180
Alfred Stieglitz (1864–1946), Edward Steichen (1879–1973), and Paul Strand (1890–1976) are among the most famous photographers of the 20th century. This handsome volume showcases for the first time the Metropolitan Museum’s extraordinarily rich holdings of works by these diverse and groundbreaking masters. A passionate advocate for photography and modern art promoted through his “Little Galleries of the Photo-Secession” (also known as “291”) and his journal Camera Work, Stieglitz was also a photographer of supreme accomplishment. Featured works by Stieglitz include portraits, landscapes, city views, and cloud studies, along with photographs from his composite portrait of Georgia O’Keeffe (selected by O’Keeffe herself for the Museum). Steichen—perhaps best known as a fashion photographer, celebrity portraitist, and MoMA curator—was Stieglitz’s man in Paris, gallery collaborator, and most talented exemplar of Photo-Secessionist photography. His three large variant prints of The Flatiron and his moonlit photographs of Rodin’s Balzac are highlighted here. Marking a pivotal moment in the course of photography, the final double issue of Camera Work (1915–17) was devoted to the young Paul Strand, whose photographs from 1915 and 1916 treated three principal themes—movement in the city, abstractions, and street portraits—and pioneered a shift from the soft-focus Pictorialist aesthetic to the straight approach and graphic power of an emerging modernism. Represented are Strand’s rare large platinum prints—most of them unique exhibition prints of images popularly known only as Camera Work photogravures. The rarely exhibited photographs gathered in Stieglitz, Steichen, Strand are among the crown jewels of the Metropolitan’s collection. 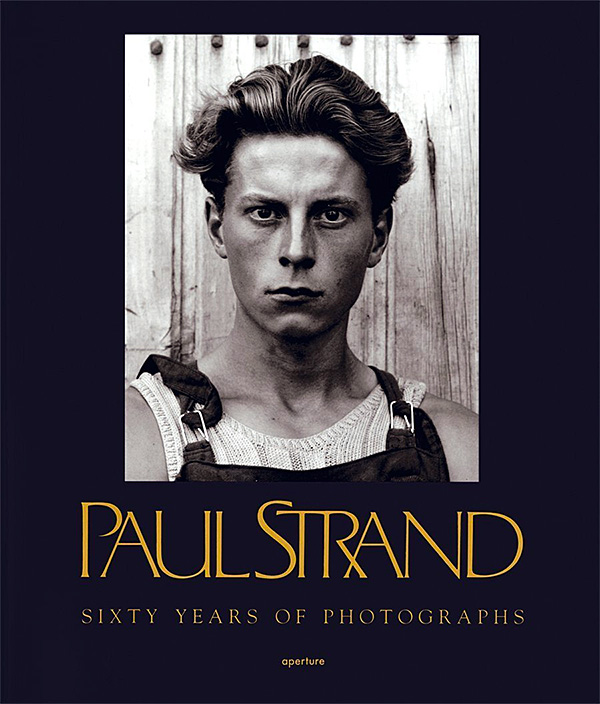 Paul Strand: Sixty Years of Photographs
Author: Paul Strand, Calvin Tomkins
Publisher: Aperture Foundation
Year: 2009 - Pages: 184
Paul Strand: Sixty Years of Photographs, a long-unavailable Aperture classic, is one of the most comprehensive surveys of the power and force of a major photographic figure of our time. Before his death in 1976 at age eighty-five, Strand combed his photographic prints and his many books with an eye to the completion of this volume. Seen here is the summation of a lifework, from the first abstract photographs to the series of plant photographs taken in the last years of his life. Also included is a rarely examined series of filmsUbrilliant, unprecedented documentaries that foreshadowed Italian neo-realism and the new cinema of the post-war years. The re-release of this volume, which features the famous biographical profile by Calvin Tomkins and excerpts from Strand's correspondence, interviews, and other documents, makes one of photography's major artists newly accessible.

Milton Rogovin
Nationality: United States
Born: 1909 - Died: 2011
Milton Rogovin was born in New York City in 1909. He graduated from Columbia University in 1931 with a degree in optometry and a deep concern for the rights of the worker. He moved to Buffalo, New York, in 1938, where he established his own optometric practice in 1939. In 1942, he married Anne Snetsky. That same year, he purchased his first camera, and was inducted into the U.S. Army, where he served in England as an optometrist until 1945. Upon his discharge, he (…)
All About Milton Rogovin

Alexander Gronsky
Nationality: Estonia
Born: 1980
Alexander Gronsky was born in 1980 in Tallinn, Estonia. He moved to Russia in 2006 and he became member of the Photographer.Ru agency in 2004. His works have been published in numerous international newspapers and magazines, such as The Sunday Times, Esquire, Le Monde 2, Vanity Fair, Spiegel, Bolshoy Gorod, Ojode Pez. He was awarded the Aperture Portfolio Prize in 2009, the Foam Paul Huf Award in 2010 and the World Press Photo 3rd place for Daily Life stories in 2012. (…)
All About Alexander Gronsky

Harry Fisch
Nationality: United States
After years of traveling, Harry Fisch has come to the conclusion that technique and vision are indispensable tools, but that empathy, curiosity, pleasure through personal relationships are the determinants which enable photography to transmit so much more than a post card.

A leader of photographic travel workshops he founded 10 years ago Nomad Photo Expeditions www.nomadphotoexpeditions.com . (…)
All About Harry Fisch

David Oliete Casanova
Nationality: Spain
Documentary photographer and filmmaker born in Tarragona (Catalonia, Spain) who lived in Cardiff and Barcelona. His latest works have been published on international media such as National Geographic Magazine, Red Bull TV, Daily Telegraph, The Times, The Sunday Times, Traveler Magazine of China, The Guardian, GEO Magazine and Daily Mail, among others. His projects have been also awarded at the International Photography Awards, the Travel Photographer of the Year and the (…)
All About David Oliete Casanova

Robert Moran
Nationality: United States
I am a freelance photographer living in a small town on the coast of Maine. My interest in photography began at the age of twelve when my parents bought me a Super 8 movie camera for Christmas. A few years later I bought my first 35mm camera. After studying art at the University of Maine, I started and ran several businesses over the course of twenty years. During that period I found the time to study photography and to pursue personal projects that resulted in several (…)
All About Robert Moran

Thomas Barbčy
Nationality: Switzerland
Thomas Barbey grew up in Geneva, Switzerland, across the street from the “Caran D'ache” factory, the largest manufacturer of art supplies. He started drawing seriously at the age of 13, using black “encre de Chine” and gouaches for color. His influences were Philippe Druillet, Roger Dean and H.R. Giger. After living in Geneva for 17 years and designing posters for musical bands, he decided to move to Italy, where he lived in Milan for 15 years making a living as a successful (…)
All About Thomas Barbčy

Carol Beckwith
Nationality: United States
Thirty years of work on the African continent have carried Carol Beckwith and Angela Fisher across 270,000 miles and through remote corners of 40 countries in exploration of more than 150 African cultures. In the process, this team of world-renowned photographers has produced fourteen widely acclaimed books and made four films about traditional Africa. They have been granted unprecedented access to African tribal rites and rituals and continue to be honored worldwide for (…)
All About Carol Beckwith

Rosa Basurto
Nationality: Spain
Born: 1972
Rosa Basurto is a self-taught photographer from Spain who, within a short frame of time, has been widely recognised for her work. Despite no formal training, Basurto demonstrates an impressive command of photographic skill, producing images that are poetic in style and imitating a dream-like world, within the reality of landscape. Though each image includes quite life-like subjects, such as trees and birds in flight, the spaces they occupy within Basurto’s photographs bring (…)
All About Rosa Basurto

Perscheid was born as Nikolaus Perscheid in Moselweiβ [de] near Koblenz, Germany, where he also went to school. At the age of 15, he began an apprenticeship as a photographer. Subsequently, Perscheid earned his living as an (…)
All About Nicola Perscheid