Deborah Turbeville was born in 1938, in Boston. Summers were spent in Ogunquit, Maine. 'Beautiful Place by the Sea' is the oceanside township's motto. 'Very bleak, very stark, very beautiful,' was Turbeville's description of it. Life was comfortable - she went to private school. Yet her mother described her as a 'shy and scary child'. Which is as it should be. The uneasy shuffle of ambiguity is the essence of Turbeville and her work - which itself shuffles between fashion magazine and art gallery, never fully at peace in either place. Like her near contemporaries, Helmut Newton and Guy Bourdin, she rethought and recast fashion photography in the 1970s. Perhaps even more than those two louche Europeans, though, she injected narrative and mystery into what is, after all, an unabashedly commercial process. Her pictures are as much riddles as they are images. Consciously damaged goods, they are blurry, grainy, tormented into painterly colours, scratched, marked, sellotaped - post-production work often done with her long-term assistant and collaborator Sharon Schuster. 'I destroy the image after I've made it,' said Turbeville. 'Obliterate it a little so you never have it completely there.' It's a quite un-American world, a view through the rear window, fascinated by the beaten, worn and forgotten. She has photographed her own house in Mexico as if she were a time-travelling visitor in her own intimate landscape, slightly drunk in exploration and contemplation of the rooms and their objects - tin retablos, wooden boxes, a painted carving of the Virgin Saint Maria Candelaria. She has photographed old Newport and the lost St Petersburg. One of her books was called 'Les Amoureuses du Temps Passe' - (female) lovers of times past. 'The idea of disintegration is really the core of my work.' When Jackie Onassis commissioned her to photograph the unseen Versailles, the late president's wife urged the photographer to 'evoke the feeling that there were ghosts and memories.' Turbeville began by researching the palace's 'mistresses and discarded mistresses', then photographed not just the palace's grand chambers and vistas but its store rooms and attics. She came to photography late. Arriving in New York at 19, with dreams of a stage career, she worked as a model and assistant to Claire McCardell - the fashion designer who brought wool jersey and denim to the catwalk. She joined Harper's Bazaar in 1963, working with its fashion editor, Marvin Israel, and his crew of photographers which included Diane Arbus, Richard Avedon and Hiro. She took her first pictures in Yugoslavia in 1966. They were blurry. She showed them to Avedon. He liked them, blurs and all. So he taught her technique. In 1972, she became a photographer. Like other adventurous photographers of the era, she worked for Nova magazine. She took some pictures for Vogue of girls in bikinis at a cement works. 'The most revolutionary pictures of the time,' said Conde Nast's editorial director Alexander Liberman. The work that made her name was the 'bathhouse' series she took for American Vogue in 1975 - fashion photographs of barely dressed women, wet and languid, almost kitsch. The oddest thing, though, is the sense that the women are prisoners - of what is not clear, of course. It's been said they look like they're in gas chambers. 'I go into a women's private world, where you never go,' Turbeville said. 'It's a moment frozen in time. I like to hear a clock ticking in my pictures.' If one of photography's most honourable impulses is to subvert - or flee from - the medium's inherent voyeurism, Turbeville collapses this paradox by succumbing to it. Victorian academic paintings presented unclothed women in bathing pools as if the painter were not there - the illusion of pornography. Turbeville's naked, wet women are under no such illusion. They know the photographer is there. They acknowledge her presence. They maybe even watch us, the viewer. The bathouse pictures were collected, with others, in her 1978 book 'Wallflower' - arrestingly and sympathetically designed by her mentor, Israel. In it are all the essentials of her work: a feeling that you are somewhere in the past; a languid, barely sexual sexuality; white, willowy women; distressed prints; a luminous quality; a sense of a narrative interrupted. Yet she's a jobbing photographer, too. She's worked for American Vogue and its British, French, Italian, and Russian counterparts. She's done ads for Ungaro, editorial photographic essays for Harper's Bazaar and portraits of Julia Roberts for the New York Times Magazine. She wears black, mostly. She has reddish hair. She has homes in Mexico, New York and Russia. She teaches in Russia. She's been married at least once. When she lived in Paris, at the turn of the 1980s, she'd rummage through the streets every evening, between 6 and 8 o'clock. 'I'm a voyeur,' she said. 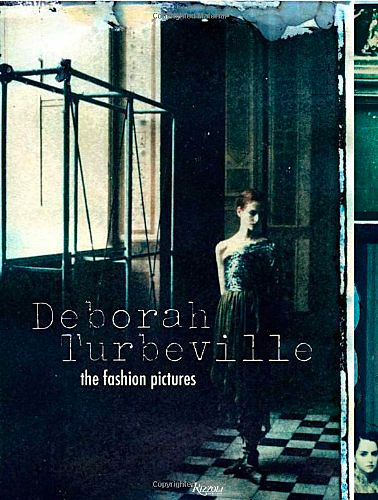 Deborah Turbeville: The Fashion Pictures
Author: Deborah Turbeville
Publisher: Rizzoli
Year: 2011 - Pages: 304
From internationally acclaimed photographer Deborah Turbeville comes the first book on her highly influential visionary avant-garde fashion photography. Celebrated for her poetic grace and cinematic vision, Deborah Turbeville has produced fashion tableaux that draw the viewer into her otherworldly environments. A romantic and modernist, Turbeville bridges the boundaries between commercial fashion and fine arts photography. In this remarkable presentation, Turbeville reveals her highly individualistic point of view of fashion photography and the stories behind her photographs. This first retrospective presentation of Turbeville's fashion photography was selected by the artist herself. In addition, she has designed the evocative layouts to create yet another masterwork. The presentation includes Turbeville's most famous photographs, among them the controversial Bathhouse series of 1975 for American Vogue with disturbingly isolated figures and her Woman in the Woods series of 1977 for Italian Vogue showing psychologically charged emotions, along with her numerous photography campaigns for labels like Sonia Rykiel, Valentino, Yamamonto, Ungaro, and Commes des Garçons, as well as commissions for Chanel and work that has never been seen before. Her most current project for Casa Vogue--Italian nobility dressed in special couture outfits--evokes Turbeville's vision of everlasting beauty.

Lu Yanpeng
Nationality: China
Born: 1984
From www.m97gallery.com
I LU YANPENG was born in 1984 in Fujian Province. He graduated from the Art Institute of Fujian University in 2005 and since then he has participated in numerous exhibitions both in China and internationally. Lu Yanpeng received the top award at the 2011 Pingyao International Photography Festival for Best Photographer for his work “(…)
All About Lu Yanpeng

In 1963, Mapplethorpe enrolled at Pratt Institute in nearby Brooklyn, where he studied drawing, painting, and sculpture. Influenced by artists such as Joseph Cornell and Marcel Duchamp, he also experimented with various materials in mixed-(…)
All About Robert Mapplethorpe

Souichi Furusho
Nationality: Japan
Born: 1977
I live in Kumamoto-Japan, and work as a graphic designer in the field of advertising media. I discovered iPhoneography on Facebook and Flickr a couple of years ago, about the same time I bought my iPhone. That was followed by a variety of delightful encounters with people online. I have since participated in exhibitions in "Spain, The Netherlands, and California" along with iPhonegraphers from various countries. Although I had no prior experience whatsoever as a photographer,(…)
All About Souichi Furusho

Guilhem Alandry
Nationality: France
Guilhem is a London based photographer and multimedia producer who has exhibited his work as an international artist around the world. He founded Documentography in 2000 and has worked in socially engaged issues for a number of charities, agencies, magazines and galleries. He is a pioneer of interactive photographic narratives and is highly accomplished in new media forms. He is a true multimedia artist, versatile and comfortable using photography, video, VR technology and (…)
All About Guilhem Alandry

Claudine De Fay
Nationality: France
I'm a french artist and poet who lives between Paris and Normandy. Here, you will find landscapes, dreamy illustrations and creative portraits. My work is a bridge between imaginary and reality, poetry and memory, and ask about the intimate of our human condition. I’m inspired by Nature, Literature and more particularly by Poetry. Recently, I worked on creations of illustrations from my photos and edit using iphone and ipad. Since 3 years, I expose regularly my work as with (…)
All About Claudine De Fay

Nando Morales
Nationality: Spain
Amateur photographer addict and seduced by nature, trying to one day be able to devote myself 100% and not have it as a hobby. Started in the world of photography, when I was very young and my sister gave me my first film camera. From that moment I do not remember having been without a camera in my hands until today. I feel good and happy especially doing landscapes and wildlife photography and enjoying the environment in which I am. Always that I can, travel around (…)
All About Nando Morales

Song Chao
Nationality: China
Born: 1979
Born in Shandong Province in 1979. Began his photography career in 2001. Currently lives and works in Beijing.
All About Song Chao

Teri Havens
Nationality: United States
Originally from Lubbock, Texas, Teri has been photographing fragments of American culture as a way of connecting with the world around her for the past twenty-five years. After studying photojournalism at the University of Texas and serving as an intern at the Magnum photo agency in New York, Teri developed her printmaking skills in darkrooms improvised in kitchens and motel rooms across the country.

In 2012, after years of being primarily a “daylight” photographer, (…)
All About Teri Havens

Jennifer Little
Nationality: United States
Born: 1977
Jennifer Little (b. 1977) lives in Oakland, California. Her current photographic work focuses on social and ecological concerns and documents intersections between the natural and the man made.

Jennifer received a B.F.A. in Photography from Washington University in St. Louis and an M.F.A. from the University of Texas at Austin. She is a tenured Associate Professor at University of the Pacific in Stockton, California, where she teaches courses covering Digital (…)
All About Jennifer Little