Share:
Country: United States | Born: 1929 - Died: 2006
Leonard Freed was a documentary photojournalist and longtime Magnum member. He was born to Jewish, working-class parents of Eastern European descent. Freed had wanted to be a painter, but began taking photographs in the Netherlands and discovered a new passion. He traveled in Europe and Africa before returning to the United States where he attended the New School and studied with Alexey Brodovitch, the art director of Harper's Bazaar. In 1958 he moved to Amsterdam to photograph its Jewish community. Through the 1960s he continued to work as a freelance photojournalist, traveling widely. He documented such events and subjects as the Civil Rights movement in America (1964–65), the Yom Kippur War in 1973, and the New York City police department (1972–79).

His career blossomed during the American civil rights movement, when he traveled the country with Martin Luther King, Jr. in his celebrated march across the US from Alabama to Washington. This journey gave him the opportunity to produce his 1968 book, Black in White America, which brought considerable attention. His work on New York City law enforcement also led to a book, Police Work which was published in 1980.

Early in Freed's career, Edward Steichen purchased three photographs from Freed for the collection of the Museum of Modern Art.[ In 1967, Cornell Capa selected Freed as one of five photographers to participate in his "Concerned Photography" exhibition. Freed joined Magnum Photos in 1972. Publications to which Freed contributed over the years included Der Spiegel, Die Zeit, Fortune, Libération, Life, Look, Paris-Match, Stern, and The Sunday Times Magazine of London. In later years, Freed continued shooting photographs in Italy, Turkey, Germany, Lebanon and the U.S. He also shot four films for Japanese, Dutch and Belgian television.


Born in Brooklyn, New York, to working-class Jewish parents of Eastern European descent, Leonard Freed first wanted to become a painter. However, he began taking photographs while in the Netherlands in 1953, and discovered that this was where his passion lay. In 1954, after trips through Europe and North Africa, he returned to the United States and studied in Alexei Brodovitch's 'design laboratory'. He moved to Amsterdam in 1958 and photographed the Jewish community there. He pursued this concern in numerous books and films, examining German society and his own Jewish roots; his book on the Jews in Germany was published in 1961, and Made in Germany, about post-war Germany, appeared in 1965. Working as a freelance photographer from 1961 onwards, Freed began to travel widely, photographing blacks in America (1964-65), events in Israel (1967-68), the Yom Kippur War in 1973, and the New York City police department (1972-79). He also shot four films for Japanese, Dutch and Belgian television.

Early in Freed's career, Edward Steichen, then Director of Photography at the Museum of Modern Art, bought three of his photographs for the museum. Steichen told Freed that he was one of the three best young photographers he had seen and urged him to remain an amateur, as the other two were now doing commercial photography and their work had become uninteresting. 'Preferably,' he advised, 'be a truck driver.' 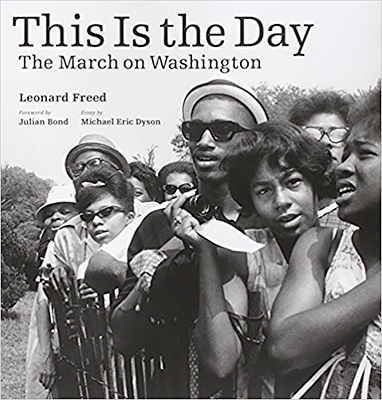 This Is the Day: The March on Washington
Author: Leonard Freed
Publisher: J. Paul Getty Museum
Year: 2013 - Pages: 128
This Is the Day: The March on Washington is a stirring photo-essay by photographer Leonard Freed documenting the March on Washington for Jobs and Freedom of August 28, 1963, the historic day on which Dr. Martin Luther King Jr. delivered his “I Have a Dream” speech at the base of the Lincoln Memorial. This book commemorates the fiftieth anniversary of the historic march that ultimately led to the passage of the Civil Rights Act of 1964. Never before published in book form, the seventy-five photographs in this volume were chosen from among the hundreds of images that Freed made in the nation’s capitol—before, during, and after the march. These images not only present us with stunning wide-angle views of hundreds of thousands of marchers overflowing the National Mall but also focus on small groups of people straining to see the speakers and on individual faces, each one filled with hope and yearning, epitomized by the beautiful young woman who throws her entire being into singing "We Shall Overcome.” In addition are eighteen pictures from the twentieth-anniversary march of August 1983, conveying a sense of celebration coupled with peaceful protest. Accompanying the photographs are a first-hand, backstage account of the preparations leading up to the march by social activist and civil rights leader Julian Bond; an essay on the importance of the march and Dr. King's involvement by sociology professor and author Michael Eric Dyson; and an informative discussion of Freed’s approach to the photographic project by scholar Paul Farber. 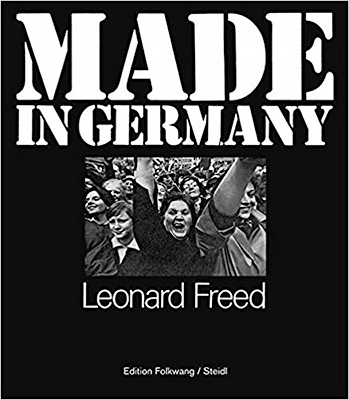 Made in Germany
Author: Leonard Freed
Publisher: Steidl
Year: 2013 - Pages: 224
The American photographer Leonard Freed travelled to Germany for the first time in 1954. He observed the people in their social surroundings, at work, at street festivals, in public parks, in the streets and against the industrial backdrop of the Ruhr Valley. The Germany he saw was deeply scarred by the effects of war and the Nazi regime, despite the country's reconstruction, industrial development and economic success. Freed published his extensive report Made in Germany for the first time with Grossman Publishers in New York in 1970. The present reprint accompanies the exhibition of the same name at Museum Folkwang in Essen and comes with the booklet Re-Made: Reading Leonard Freed, providing extra information about Freed's approach and his times. The booklet is edited by Paul M. Farber and contains hitherto unpublished images, documents and writing by Freed, spanning his 50 years of photographing Germany. 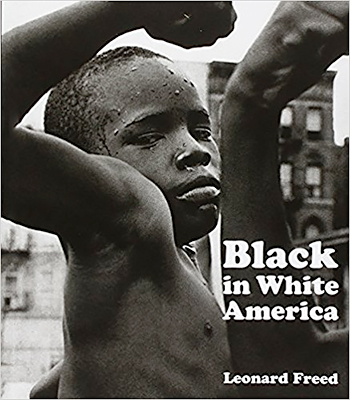 Black in White America
Author: Leonard Freed
Publisher: J. Paul Getty Museum
Year: 2010 - Pages: 208
Leonard Freed (1929-2006) was inspired to capture the African American experience while he was in Berlin in 1962 to photograph the building of the Berlin wall. He noticed a black soldier standing in front of the wall and was struck by the fact that this soldier was ready to defend America abroad, while at home African Americans were facing their own battle for civil rights. Traveling in New York, Washington, D.C., and throughout the South, Freed captured images that reflected the struggle for the end of racial segregation. First published in 1968, Black in White America shows many aspects of black life in 1960s America, from political marches and rallies to children playing and splashing in the spray of a fire hydrant, from signs for colored entrances to interactions with whites. One particularly poignant image shows Martin Luther King Jr. in an open convertible being greeted by an eager crowd of admirers. Freed's captions include observations, stories about the people he met, lyrics from spirituals, and an excerpt from the "I have a dream" speech.

As a news and reportage photographer, Oleksandr carries out short and long-term projects about political, cultural, and social life in Europe, (…)
All About Oleksandr Rupeta

Patrick Morarescu
Nationality: Germany
Statement:
Due to the natural dynamic and complexity of the individual, I have always been drawn to portraiture. I photograph persons to whom I feel an initial attraction and try to reflect this force in images. A power that you cannot describe in words or in rational concepts but it captures the attention and creates a strong curiosity, a sort of addiction not only to body shapes, eyes, skin tonalities, but to what is behind: the thoughts and the mental state of (…)
All About Patrick Morarescu

Hossein Fardinfard
Nationality: Iran
Born: 1985
Netherlands-based Iranian documentary photographer Hossein Fardinfard (born 1985) took an unconventional path to his profession. After majoring in cartography, geomorphology, and IT, ultimately he discovered his aptitude for visual storytelling at the age of 30.

Fardinfard came to see photography as a means for observing society more intimately, and for knowing himself more deeply in turn. He has thus come to specialize in photography that explores social (…)
All About Hossein Fardinfard

Reza
Nationality: Iran/France
Born: 1952
A philanthropist, idealist, humanist, Reza's career began with studies in architecture. He has gone on to become a renowned photojournalist who, for the last three decades, has worked all over the world, notably for National Geographic. His assignments have taken him to over a hundred countries as a witness to humanity's conflicts and catastrophes. His work is featured in the international media (National Geographic, Time Magazine, Stern, Newsweek, El País, Paris Match, Geo..(…)
All About Reza

Trevor Cole
Nationality: Ireland
To capture people and landscapes and the interactions between them in the light of a world in transition is to encapsulate an inimitable moment, which will never again materialise. My own 'take' as a geographer photographer!

Born in the City of Derry, but I have lived most of my life outside the bounds of Ireland; in England, Singapore, Togo, Italy, Ethiopia and Brazil. I returned to Ireland (Donegal) in 2012.

My photography, together with travel, have (…)
All About Trevor Cole

Kieran is an award-winning photographer, videographer and visual storyteller based in Boston. He has experience in photojournalism, documentary, editorial and commercial photography and is available for international, domestic and regional assignments.

Recent recognitions include a Webby for Best Use of Photography, first place in International News at NPPA Best of (…)
All About Kieran Kesner

Gustavo Lacerda
Nationality: Brazil
Born: 1970
Gustavo Lacerda is a brazilian artist, living in Sao Paulo. Born in Belo Horizonte, he grew up and studied journalism there. He become a photographer in the early nineties. In 2000 he moved to Sao Paulo and since then he has developed personal projects at the same time of his commissioned work. His work has been the winner of some awards and was published or exhibited in several countries like Brazil, China, Korea, Russian, Germany, Italy, France, Belgium, Slovenia, USA.
All About Gustavo Lacerda

Dan Winters
Nationality: United States
Born: 1962
Dan Winters (b. October 21, 1962) is an American photojournalist, illustrator, filmmaker and writer.
He was born in Ventura County, California on October 21, 1962. He first studied photography and the darkroom process starting in 1971 while a member of his local 4-H club. In 1979, while still a high school senior, he began working full time in the motion picture special effects industry in the area of miniature construction and design. He went on to study photography at (…)
All About Dan Winters

Hase was born in Döhlen bei Leipzig, Germany. She studied typography and commercial art from 1924 to 1929 at the School of Applied Arts, and later at the Städelschule, under, among other teachers, Paul Renner and Willi Baumeister.

Chris Moret
Nationality: Netherlands
I'm a Rotterdam based amateur-photographer. However, saying photography is 'just a hobby' would be a big understatement. Taking pictures is a thing I have to do. There is that ever present need to freeze the remarkable, beautiful, or odd moments that cross my everyday path.

I got a degree in photography in 1992, but never turned that into a professional career. Once a frustration that made me drift away from photography for 16 years. However later on it became a (…)
All About Chris Moret