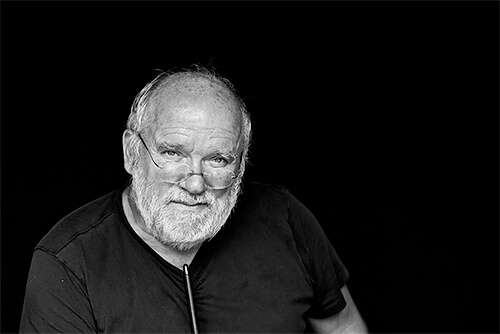 © Peter Lindbergh by Stefan Rappo 2015
Country: Germany | Born: 1944 - Died: 2019
Peter Lindbergh, born Peter Brodbeck, is a German photographer and filmmaker, born on November 23, 1944 in Leszno, Poland (the city was German between 1939 and 1945 and called Reichsgau Wartheland). Peter Lindbergh spent his childhood in Duisburg. After a basic school education he worked as a window dresser for the Karstadt and Horten department stores in Duisburg. At 18, he moved to Switzerland. Eight months later, he went from Lucerne to Berlin and took evening courses at the Academy of Arts. He hitchhiked to Arles in the footsteps of his idol, Vincent van Gogh. After several months in Arles, he continued through to Spain and Morocco, a journey that took him two years. Returning to Germany, he studied Free Painting at the College of Art in Krefeld (North Rhine-Westphalia). In 1969, while still a student, he exhibited his work for the first time at the Galerie Denise René - Hans Mayer. Concept Art marked his last period of interest in art. In 1971 his interest turned toward photography and for two years he worked as the assistant to the Düsseldorf-based photographer, Hans Lux.

When Lindbergh was put under contract to the American Harpers Bazaar by Liz Tilberis in 1992, she made her editor sign a seven-figure check. His first book, 10 Women by Peter Lindbergh, a black-and-white portfolio of ten top contemporary models, was published in 1996 and had sold more than 100,000 copies as of 2008. Twice he has shot the Pirelli calendar, in 1996 and 2002. The latter, which featured actresses instead of models for the first time, was shot on the back lot of Universal Studios, and was described by Germaine Greer as "Pirelli's most challenging calendar yet." He currently maintains residences in Paris, Manhattan, and Arles.

Brad Patocka
Nationality: United States
Born in Upstate NY, USA to a blue-collar upbringing, I was quickly drawn to the rugged environments of the outdoors.

This inevitably led to an unrelenting quest for exploration and travel, always driven by a curiosity of what the world is and what it can be.

Like many, I first became interested in the photography from Nat Geo magazines, looking at images of the vastly different cultures and habitats around the globe produced by the countless (…)
All About Brad Patocka

When I became acquainted with photography, I have started to experiment with all sorts of forms of photography. It was a big discovery to reveal the dynamics in the most mundane moments on the street, that have turned out (…)
All About Sandra Jonkers

Artur Nikodem
Nationality: Austria
Born: 1870 - Died: 1940
Artur Nikodem (1870-1940) was born in Trent, Austria. As a young man, Nikodem studied at the Academy of Fine Arts in Munich, Milan and Florence. He then served in the Austrian Navy before settling briefly in Paris, where he was strongly influenced by the works of Monet and Cezanne. Awestruck by the ability of pigment to rearrange and restructure life on canvas, Nikodem began his endeavors as a painter. His burgeoning artistic career was delayed by military service during (…)
All About Artur Nikodem

Don McCullin
Nationality: United Kingdom
Born: 1935
Donald (Don) McCullin, FRPS CBE is an internationally known British photojournalist, particularly recognized for his war photography and images of urban strife. His career, which began in 1959, has specialised in examining the underside of society, and his photographs have depicted the unemployed, downtrodden and the impoverished. McCullin's period of National Service in the RAF saw him posted to the Canal Zone during the 1956 Suez Crisis, where he worked as a photographer'(…)
All About Don McCullin

Beth Moon
Nationality: United States
Born: 1956
San Francisco Bay Area artist, Beth Moon, has gained international recognition for her large-scale, richly toned platinum prints. Since 1999, Moon’s work has appeared in more than sixty solo and group exhibitions in the United States, Italy, England, France, Israel, Brazil, Dubai, Singapore, and Canada. Her work is held in numerous public and private collections, including the Museum of Fine Arts, Houston, the Museum of Photographic Arts in San Diego, and the Fox (…)
All About Beth Moon

Álvarez Bravo was born in downtown Mexico City on February 4, 1902. He left school at the age of twelve in order to begin making a contribution to his family’s finances after his father's death. He worked at a textile factory for a time, and later at the (…)
All About Manuel Álvarez Bravo

George Brassaď
Nationality: Hungary/France
Born: 1899 - Died: 1984
George Brassaď (pseudonym of Gyula Halász) was a Hungarian photographer, sculptor, and filmmaker who rose to international fame in France in the 20th century. He was one of the numerous Hungarian artists who flourished in Paris beginning between the World Wars. In the early 21st century, the discovery of more than 200 letters and hundreds of drawings and other items from the period 1940–1984 has provided scholars with material for understanding his later life and career.<(…)
All About George Brassaď

Thomas Devaux
Nationality: France
Born: 1980
Thomas Devaux has authored several complex and ambitious series. In each of them one can find a subtle but strong game of jousting played out between his core values and the evolutions brought about by modern technology. The inflammatory value behind the photography is not so innate. It is more a direct effort meant to mirror a fragment of a future re-composition.
The works in the "ATTRITION" series were selected according to their composition and their figurative will. (…)
All About Thomas Devaux