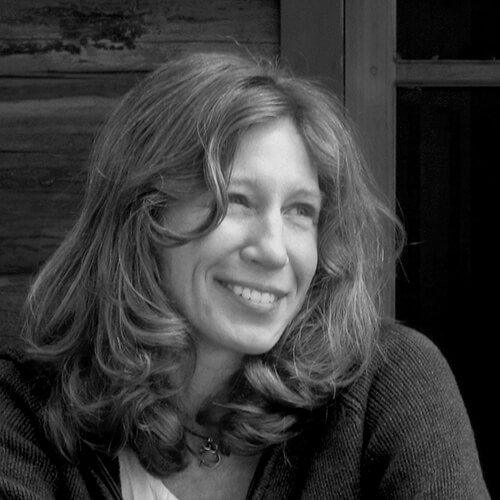 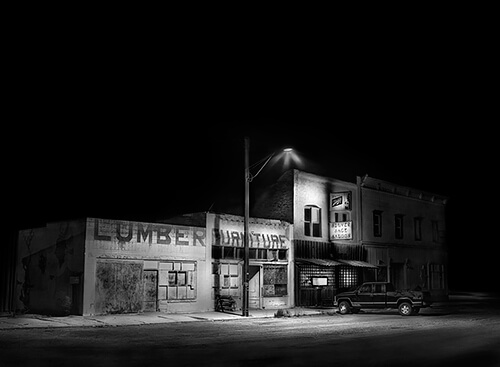 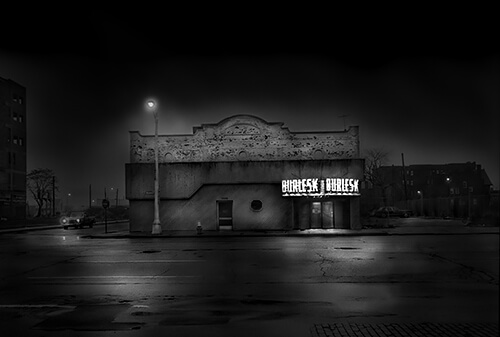 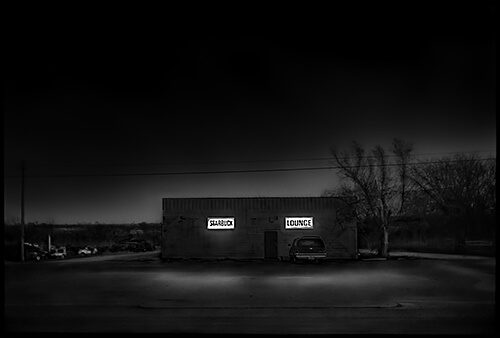 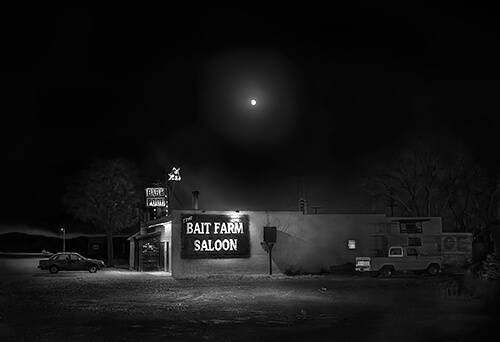 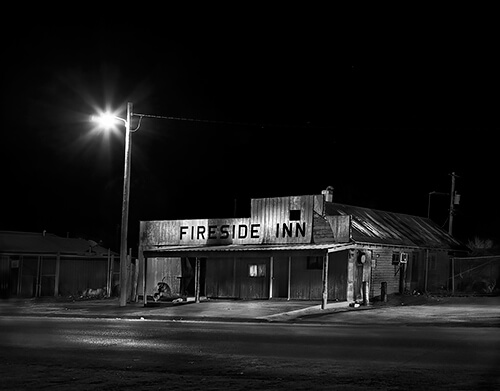 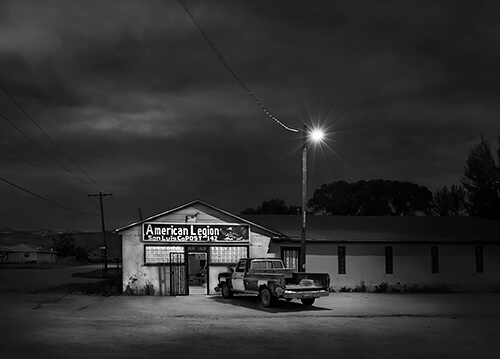 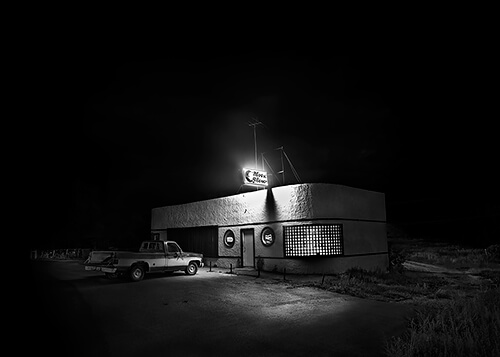 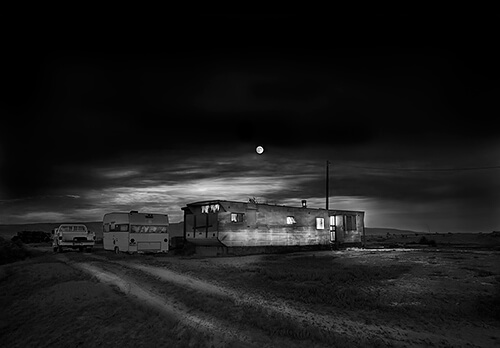 Jacks Place
PreviousNext
© Teri Havens
Country: United States
Originally from Lubbock, Texas, Teri has been photographing fragments of American culture as a way of connecting with the world around her for the past twenty-five years. After studying photojournalism at the University of Texas and serving as an intern at the Magnum photo agency in New York, Teri developed her printmaking skills in darkrooms improvised in kitchens and motel rooms across the country.

In 2012, after years of being primarily a “daylight” photographer, Teri started experimenting with night photography. Using moonlight or available streetlight she began a series of social landscapes that reveal a lonely, yet enduring portrait of a nearly forgotten America.

Teri currently lives in rural Colorado with her husband Mike. When not lost in the backcountry, or in her darkroom producing palladium prints, she can be found in her beloved ’88 Ford Van on the track of the perfect roadside bar. Her work has been exhibited internationally, and published in The Huffington Post, The London Sunday Times, The Sun Magazine, Photo District News and on the NPR website. Teri is immensely grateful for the funding she has received through the Puffin Foundation and Dave Bown Projects.
Website:
terihavens.com
Share:
Selected Work:
Teri Havens

Nick Brandt
Nationality: United Kingdom
Born: 1966
Nick Brandt is a photographer who photographs exclusively in Africa, one of his goals being to record a last testament to the wild animals and places there before they are destroyed by the hands of man. Born in 1966 and raised in London, England, Brandt studied Painting, and then Film at Saint Martin's School of Art. He moved to the United States in 1992 and directed many award-winning music videos for the likes of Michael Jackson (Earth Song, Stranger in Moscow, Cry), (…)
All About Nick Brandt

Yelena Zhavoronkova
Nationality: United States
Born: 1956
Yelena Zhavoronkova is a California based Fine Art Photographer and Graphic Designer. She received a Master's degree in Industrial Design from the Saint Petersburg Art and Industry Academy, USSR, and has worked as a graphic designer for over three decades.

Over the past decade, Yelena has been intensively studying and working in photography, which helps her to express her artistic vision. Yelena's projects are simultaneously very personal and universal in nature, (…)
All About Yelena Zhavoronkova

Simona Bonanno
Nationality: Italy
Born: 1974
Born in 1974, in Messina, Italy to a family involved in the arts. After obtaining the artistic High School degree in 1992 she studied in Paris, at the Atelier Peninghen, ESAG. She received a Bachelor of Arts, in 1999, at the School of Arts in Italy, where she started photographing with film.

Her photographs have been selected for several group exhibitions in Italy, USA, Canada, France, Australia, Argentina, Israel, Turkey and Denmark. In 2013 she had her first solo (…)
All About Simona Bonanno

Jared Ragland
Nationality: United States
Born: 1977
Jared Ragland is a fine art and documentary photographer and former White House photo editor. He currently teaches and coordinates exhibitions and community programs in the Department of Art and Art History at the University of Alabama at Birmingham and is at work on a long-term documentary on methamphetamine users living in northeast Alabama. He is the photo editor of National Geographic Books' "The President's Photographer: Fifty Years Inside the Oval Office," and has (…)
All About Jared Ragland

Andreas Franke
Nationality: Austria
Andreas Franke is in the business for more than twenty years. For Luerzer‘s Archive he is among the 200 Best Photographers. He worked for great brands like Ben&Jerry's, Coca-Cola, Ford, General Electric, Gillette, Heineken, Nike, Visa or Wrigley‘s. His still lifes and his surreal effects are famous. In his pictures every little detail is planned precisely. There is no space left for fortuity. Andreas Franke is a traveler. He travels through the world and between the worlds. (…)
All About Andreas Franke

Bryan Adams
Nationality: Canada
Born: 1959
Adams works as a photographer as well as musician, aside from being published in British Vogue, L'uomo Vogue, Harper's Bazaar, Esquire, Interview magazine and i-D, among others, he has also shot advertising campaigns for Guess Jeans, Sand, Converse, Montblanc, John Richmond, Fred Perry, and more recently for Escada.
He has won Lead Awards twice in Germany for his fashion work, most recently June 2012 and previously in 2006. Other photographic endeavours include founding (…)
All About Bryan Adams

Rosita Delfino
Nationality: Italy
I started getting interested in photography in 2009 and since then I have been emotionally struck by the picture's power of communication. Photography is a dimension where pictures enhance the words and become means of expression of our inner world, through the filter of our eyes they have the power of changing the reality. It is a never ending dialogue between appearing and being, a wonderful journey in the female dimension, where the body is no more bound to space and time (…)
All About Rosita Delfino

David Seymour (Chim)
Nationality: United States
Born: 1911 - Died: 1956
David Szymin was born in 1911 in Warsaw into a family of publishers that produced works in Yiddish and Hebrew. His family moved to Russia at the outbreak of the First World War, returning to Warsaw in 1919.

After studying printing in Leipzig and chemistry and physics at the Sorbonne in the 1930s, Szymin stayed on in Paris. David Rappaport, a family friend who owned the pioneering picture agency Rap, lent him a camera. One of Szymin's first stories, about night (…)
All About David Seymour (Chim)

Benita Suchodrev
Nationality: United States
Born: 1975
Benita Suchodrev was born in the former Soviet Union and immigrated to the United States where she received her Bachelor's degree in Liberal Arts with a focus on Art History from SUNY Purchase, New York, continuing to a Master of Arts in English Literature, graduating with high honors. It was in the university darkroom where Benita developed and produced her first black and white prints.

Mikhail Potapov
Nationality: Russia Federation
Born: 1983
Mikhail Potapov is an accomplished art photographer who is constantly searching to discover something new. Potapov Mikhail was born in Russia in 1983, the city of Rostov-on-don. By education the teacher, I work as the judo coach. I got interested in photography in 2014, it's a great hobby for me. I consider myself an artist rather than a photographer. I shoot in different styles and it is important for me to constantly search for new things. When I started to take pictures, (…)
All About Mikhail Potapov