Share:
Country: China | Born: 1929 - Died: 2004
Don Hong-Oai was born in Canton, China in 1929 as the youngest son to a business family and was raised and educated in Saigon, Vietnam. At age 13 he began an apprenticeship at a Chinese photo and portrait shop. In 1979 he immigrated to the United States and settled in Chinatown of San Francisco.

Don began making a living by selling his landscape photographs in front of Macy’s and began to receive recognition for his craftsmanship. His style was heavily influenced by the legendary photographer Long Chin-San and his technique of layering negatives. By taking three negatives, foreground, middle ground, and far ground, and selecting a subject from each negative, Don would form one composite image of a serene landscape. All the various scenes in an image existed in reality, but each uniquely handcrafted photograph in its entirety is a concoction of the artist's imagination. Each photograph was assembled only by the artist himself thus he never had an assistant nor a master printer like some photographers. His work has won scores of international awards and has been collected worldwide. Sadly, Don passed away in San Francisco in 2004.


Don was born in Canton, China in 1929 and spent most of his life in Vietnam. As a young boy in Saigon he apprenticed at a photography studio. When he was not at the studio, he traveled and took photographs of the landscape. He stayed in Vietnam through the war, but fled by boat to California in 1979. He lived in San Francisco’s Chinatown where he had a small darkroom to create his photographs. While living the US he returned to China every few years to make new negatives. Only in the last few years of his life was his work discovered by a wider public, and he was kept very busy making prints for collectors across the US and elsewhere. Don died in June 2004. The photographs of Don Hong-Oai are made in a unique style of photography, which can be considered Asian pictorialism. This method of adapting a Western art for Eastern purposes probably originated in the 1940s in Hong Kong. One of its best known practitioners was the great master Long Chin-San (who died in the 1990s at the age of 104) with whom Don Hong-Oai studied. With the delicate beauty and traditional motifs of Chinese painting (birds, boats, mountains, etc.) in mind, photographers of this school used more than one negative to create a beautiful picture, often using visual allegories. Realism was not a goal. Don Hong-Oai was one of the last photographers to work in this manner. He is also arguably the best. He has won hundreds of awards given by photography societies throughout Asia and by international juries of Kodak and Nikon. 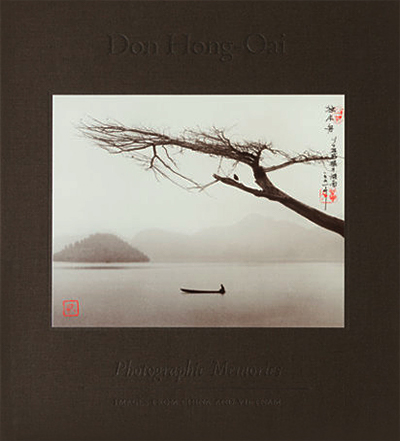 Don Hong-Oai: Photographic memories : images from China and Vietnam
Author: Don Hong-Oai
Publisher: Custom & Limited Editions
Year: 2000 - Pages: 130
BOX has Slight wear on corners and slight discoloration on one side. They book has a few pages in the back with a fingernail size slight indentation. The inscription can be covered with the third grey page. The point has a small white blemish that would be easy for a pro to fix.

Builder Levy
Nationality: United States
New Yorker Builder Levy has been photographing America and her inhabitants for the past 50 years. His social consciousness took him to significant areas of our country during tumultuous times. His commitment to aesthetically [or artistically] documenting the world around him earned him the prestigious Guggenheim Fellowship in 2008. Levy's work is in more than 50 public collections, including the Metropolitan Museum of Art, Brooklyn Museum, High Museum of Art, (…)
All About Builder Levy

Nicolas Thomas Moreno
Nationality: France
Born: 1986
Born in 1986 in Suresnes, I moved all over France during my youth as I followed my father's professional transfers. Middle School in Languedoc, part of High School in Jura and the rest in Besancon.

Back in Paris in 2010 after being accepted at the Icart School of Photography (in Levallois Perret), I obtained my diploma in 2013, finishing second with my series "Architectura".

Since then, I had several internships with architectural photographers and I (…)
All About Nicolas Thomas Moreno

Lu Yanpeng
Nationality: China
Born: 1984
Lu Yanpeng was born in 1984 in Fujian Province. He presently lives and works in Beijing. After graduating from the Art Institute of Fujian University in 2005, he has participated in numerous exhibitions both in China and internationally. Lu Yanpeng was nominated for the FOAM Paul Huf Award in Netherlands in 2011 and received the top award at the 2011 Pingyao International Photography Festival for the Best Photographer for his work "Open Air". He was the youngest artist to (…)
All About Lu Yanpeng

Nieves Mingueza
Nationality: Spain
Nieves Mingueza is a lens-based, mixed media artist working with experimental photography, collage and text. Born in Spain, based in London. The often-cinematic themes in her projects have in common her fascination with old books, film stills, vintage cameras, poetry and minimal drawings. Ultimately, Nieves' work is about the foggy relationship between fiction and reality. In addition, she is currently exploring about immigration, mental health and human conflicts.

Sasha Maslov
Nationality: Ukraine
Born: 1984
Sasha Maslov was born in Ukraine in 1984. Inspired and taught by his father, photographer Guennadi Maslov, and later his teacher and mentor, Oleg Shishkov, he developed into an aspiring young photographer. Later Sasha became known for his social documentary projects around Eastern Europe, especially in his native country. He started pursuing career as a portrait photographer in New York city, where he moved at the age of 24 in 2008. Since then he has been working for leading (…)
All About Sasha Maslov

Raquel Chicheri
Nationality: Spain
Born: 1973
Raquel Chicheri is a freelance photographer.
I am from Galicia, Northern Spain but because it was cold and wet I decided to move to Fuerteventura, an island off the coast of Africa which has a much better weather. I loved photography since I was a kid, my father is a great photographer and his work inspired me from the beginning. I studied " comercio internacional" (International commerce or trade) but I only worked one year in that field and then decided to study graphic (…)
All About Raquel Chicheri

Kerekes Istvan
Nationality: Hungary
Born: 1977
I was born in 1977 in Marosvásárhely. I live in Mosonmagyaróvár – western Hungary I am taking part regulary in national and international photo competitions and exhibitions since 2004 My pictures have been shown in more than 40 countries, on five continents, and I won over 400 prizes and awards, in national and international photo contests I take mainly social life-, portrait-, and nature photographs.
Source kerekesistvan.com
All About Kerekes Istvan