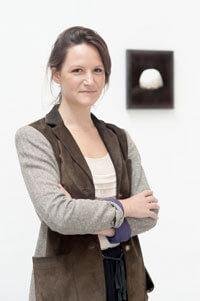 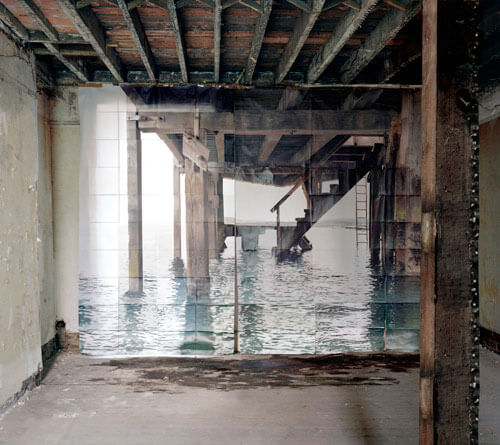 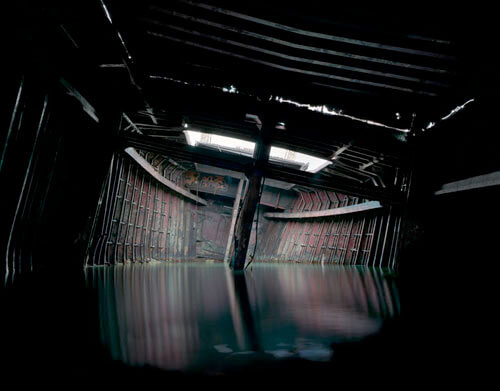 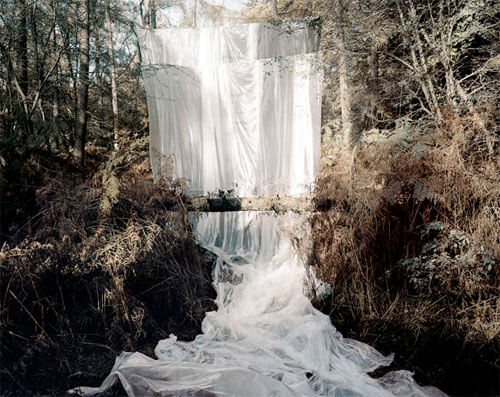 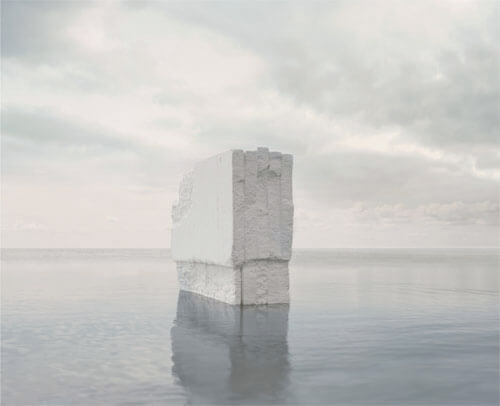 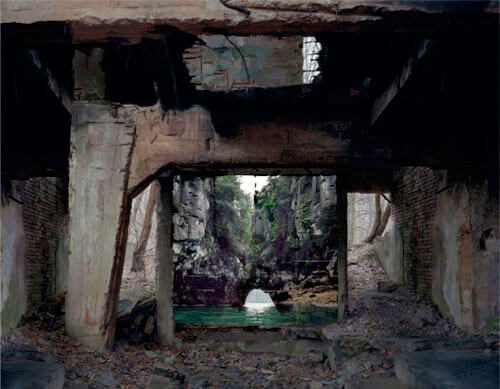 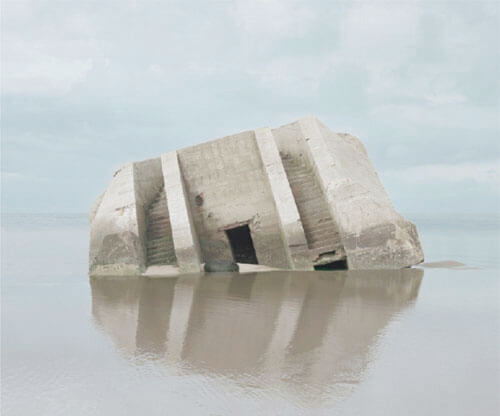 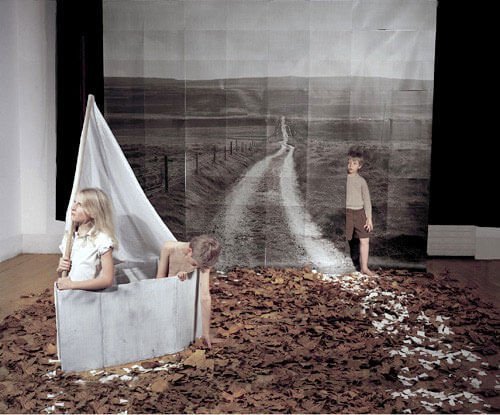 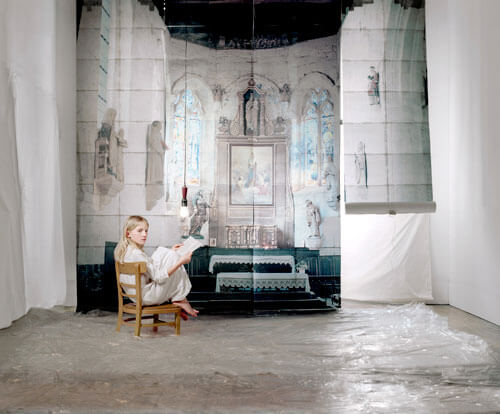 Noémie Goudal has long been drawn to the meeting point of nature and culture, or as she puts it, the organic as “invaded” by the man-made. Goudal also feels a strong attraction to the theatre, and combines the two leanings in the series Les Amants (the Lovers), in which Cascade and Promenade play a part. However, the two works address the issues in different ways: the one is a photograph of a theatrical installation, its school-play hokeyness meant to underline its absurdity; the other is a staging where a photograph plays the main role. On both stages, real nature is relegated to best-supporting actress.
Source Saatchi Gallery
Website:
www.noemiegoudal.com
Share:
Selected Work:
Noémie Goudal

Gautam Narang
Nationality: United Kingdom
Born: 1984
I found photography by mistake, when doing my GCSE, I was sitting in the study room, then heard a teacher describe the subjects they taught at the school. As he was going through the subjects, he mentioned photography. I thought to myself was this a subject? Photography! It's so easy, all you do is click (How, wrong I was, how very wrong) *sigh*. As a child I used to play around with cameras. I always looked through them as was interested In them. So I sat in the lesson and (…)
All About Gautam Narang

Elliott Wilcox
Nationality: United Kingdom
Elliott Wilcox is a London based, British photographer who recently graduated from the University of Westminster, MA Photographic Studies program. He has been the recipient of several awards including a Judges Award at the Nikon Discovery Awards and a New York Photo Award. Elliott recently won a prestigious Lucie Award for the Discovery of the Year at the International Photography Awards. Elliott has exhibited internationally and in the UK, his first major series 'Courts' (…)
All About Elliott Wilcox

Lucas Foglia
Nationality: United States
Born: 1983
Lucas Foglia grew up on a small family farm in New York and currently lives in San Francisco. His work focuses on the intersection of human belief systems and the natural world. He recently published his third book of photographs, Human Nature, with Nazraeli Press. Foglia exhibits internationally, and his prints are in notable collections including International Center of Photography, San Francisco Museum of Modern Art, and Victoria and Albert Museum. He photographs for (…)
All About Lucas Foglia

Reza
Nationality: Iran/France
Born: 1952
A philanthropist, idealist, humanist, Reza's career began with studies in architecture. He has gone on to become a renowned photojournalist who, for the last three decades, has worked all over the world, notably for National Geographic. His assignments have taken him to over a hundred countries as a witness to humanity's conflicts and catastrophes. His work is featured in the international media (National Geographic, Time Magazine, Stern, Newsweek, El País, Paris Match, Geo..(…)
All About Reza

Martin Usborne
Nationality: United Kingdom
Martin Usborne is primarily a portrait and fine art photographer who has had his work published in publications such as The British Journal of Photography, time.com, The Guardian and Das Magazin, as well as being shown in major galleries both in the UK and US. He has recently completed a two-year personal project entitled The Silence of Dogs in Cars. The images are to be published as a large, hand bound, beautifully printed photography book in October this year.
All About Martin Usborne

Hai Bo
Nationality: China
Born: 1962
Hai Bo (b. 1962, Changchun, China) graduated from the Printmaking Department of the Fine Art Institute of Jilin in 1984. His artistic ideals involve the restoration of the past through photography. Hai Bo’s work is less about what changes through time and more about what endures. His photography often depicts people shown in various stages of life as well as the passage of time.
All About Hai Bo

Christian Chaize
Nationality: France
Christian Chaize, a self-taught artist, lives and works in Lyon, France. In 1992, he was awarded the Prix European Panorama de Kodak for Young European Photographer in Arles, France. In addition to his artistic achievements, he enjoys a successful career as a commercial photographer.

In 2004, Chaize became intrigued by a small stretch of coastline in southern Portugal. Itching an artistic scratch, he began shooting what was then an entirely new subject matter for (…)
All About Christian Chaize

Albert Watson
Nationality: Scotland
Born: 1942
Albert Watson (born 1942) is a Scottish photographer well known for his fashion, celebrity and art photography, and whose work is featured in galleries and museums worldwide. He has shot over 200 covers of Vogue around the world and 40 covers of Rolling Stone magazine since the mid-1970s. Photo District News named Watson one of the 20 most influential photographers of all time, along with Richard Avedon and Irving Penn, among others. Watson has won numerous honors, including (…)
All About Albert Watson

Jianwei Yang
Nationality: Canada
Born: 1969
I was born in 1969, Beijing. Studied Computer Science at Beijing University of Technology and University of Tsukuba. I’m currently working for a software company in Vancouver. Photography is a hobby and I became a serious street photographer in late 2010. I love walking on the streets in downtown Vancouver and capture the interesting moments in those familiar places. Urban geometry, light and shadow, strong contrast and precise timing...those are the basic elements in my (…)
All About Jianwei Yang