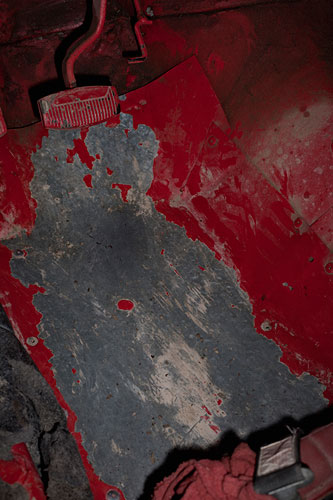 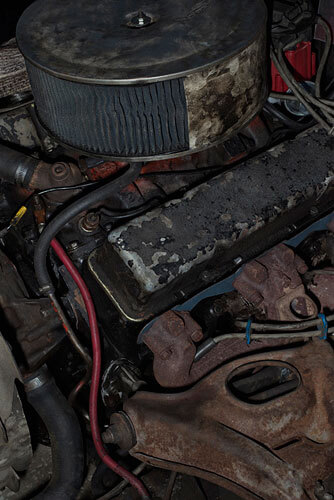 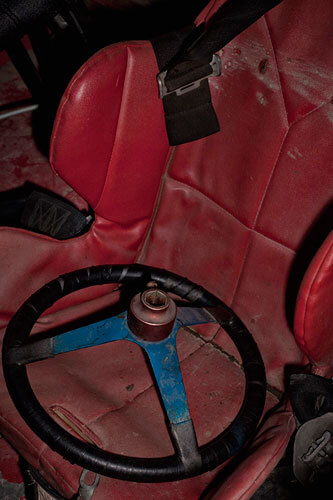 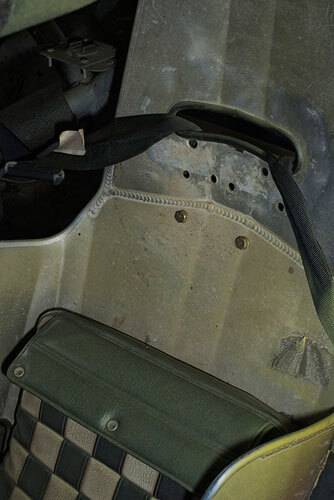 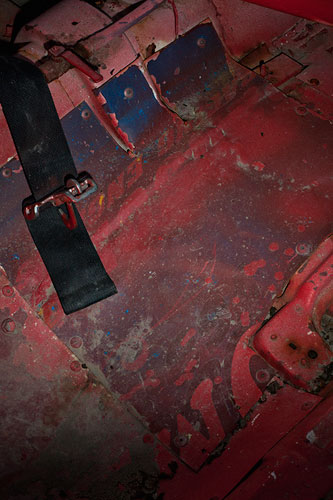 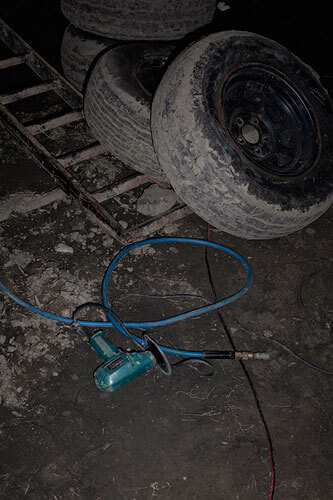 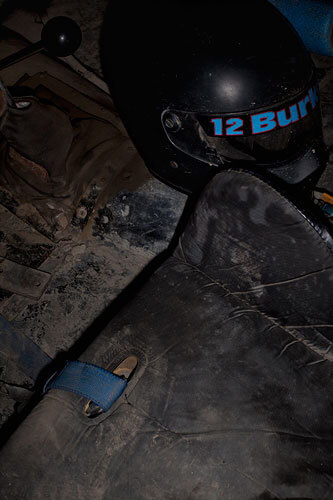 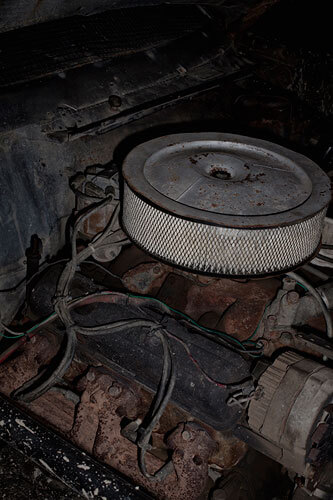 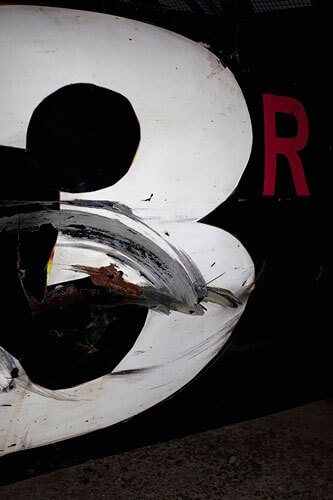 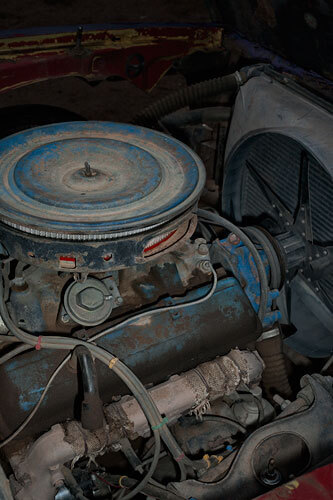 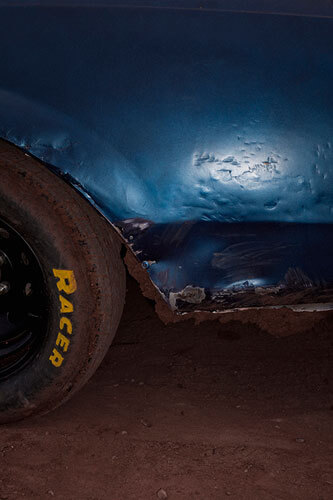 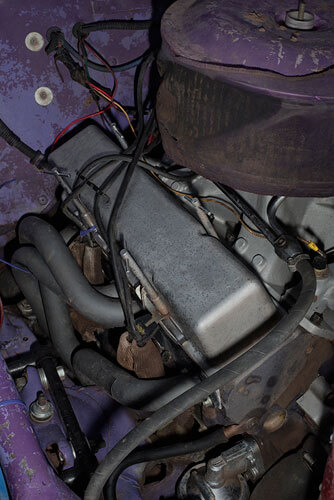 © Adam Bartos, Courtesy Gitterman Gallery
PreviousNext
© Adam Bartos
Country: United States | Born: 1953
Adam Bartos visited local speedways in rural New York, Florida and New Mexico where drivers race the super-stock class of car on quarter-mile dirt oval tracks. This elemental class of driver-owned racecar competes without corporate sponsorship, for minimal prize money, simply for the pure thrill and sport of weekend motor racing on tracks all over the U.S. The intrinsic aesthetic Bartos captures is that of a rather crude and utilitarian technology glamorized by the singularity of its purpose and accumulated patina, acquired at high speeds on dirt tracks.

It is said that stock car racing originated in the 1920s, during prohibition, when "moon runners" began boasting about the speeds of their nighttime trips, often on backcountry roads, illegally transporting liquor. Soon they began to race with each other for sport on weekends. (Famously, Robert Mitchum played one of these runners in the 1950’s cult classic, Thunder Road).

Adam Bartos’s work has been exhibited widely. His books include: International Territory (Verso, 1994), which looks at the aging modern architecture of the United Nations’ headquarters and, implicitly, the ideals which created it; Kosmos (Princeton Architectural Press, 2001), a then inconceivable look into the Russian space program; Boulevard (Steidldangin, 2005), a dialogue between Paris and Los Angeles; Yard Sale Photographs (Damiani Editore, 2009) and Darkroom (Steidldangin, 2012). His work is in the collections of the J. Paul Getty Museum, Los Angeles; the Museum of Fine Arts, Houston; the Museum of Modern Art, New York; the Whitney Museum of American Art, New York; the San Francisco Museum of Modern Art, and others. In 2013, he was shortlisted for the Prix Pictet, a global award in photography and sustainability, for his series Yard Sale Photographs.
Gallery:
Gitterman Gallery
Website:
www.adambartos.com
Share:
Selected Work:
Adam Bartos

Kimiko Yoshida
Nationality: Japan
Born: 1963
Kimiko Yoshida is a Japanese visual artist who was born in 1963 and lives in Europe since 1995.

Subtle, fictional, paradoxical, Kimiko Yoshida’s Bachelor Brides form an ensemble of quasi-monochromatic self-portraits, fragments of an intimate web, elaborating on a singular story: the feminine condition in Japan. Her images are large format, luminous squares, underlining her fantasy-bio epic. While still very young, Kimiko Yoshida was struck by the story of (…)
All About Kimiko Yoshida

Kamil Vojnar was born in the former Czechoslovakia in 1962. He studied at the School of Graphic Arts in Prague and began his career as a Graphic Designer. He left the country illegally (still Communist at the time) and moved to Vienna, and then eventually became a US citizen and finished his studies at the Art Institute of Philadelphia. He continued his career in Graphic Design which later led to illustration and imagery based on photography, working mostly for book and (…)

Soumya Sankar Bose
Nationality: India
Born: 1990
I am a documentary photographer based in India. I did my Post graduate diploma in photography from Pathshala South Asian Media Institute.
Born in 1990 Midnapore - Lives and works in Kolkata

Awards and Fellowships:
The Toto-Tasveer Emerging Photographer of the Year.
India foundation for the Arts grant for the Project "Let's Sing an Old Song".
Magnum Foundation's Photography and Social Justice Fellowship for the Project "Full Moon in a Dark night"
(…)
All About Soumya Sankar Bose

Laura El-Tantawy
Nationality: Egypt
Laura El-Tantawy is an Egyptian photographer living between Cairo and London. She is represented by VII Mentor. She was born in Worcestershire, England to Egyptian parents & grew up between Saudi Arabia & Egypt. In 2002, El-Tantawy started her career as a newspaper photographer with the Milwaukee Journal Sentinel & Sarasota Herald-Tribune (USA). In 2006, she became freelance so she could focus on pursuing personal projects. In 2008, she was nominated & accepted as one of 15 (…)
All About Laura El-Tantawy

Lauren Welles
Nationality: United States
Born: 1968
Lauren is a freelance photographer, and former attorney, based in New York City. Her street photography has received several awards and has been exhibited at various venues around the world, including: "The Fence" at Photoville, NYC; the Museum of the City of New York, NYC; Arsenal Gallery in Central Park, NYC; PhotoLeiden, The Netherlands; Gudberg Nerger Gallery, Hamburg, DE; and the Center For Fine Art Photography, HistoryMiami Museum, and Rayko Photo Center, in the US. (…)
All About Lauren Welles

Tim Flach
Nationality: United Kingdom
Born: 1958
Tim Flach is an animal photographer with an interest in the way humans shape animals and shape their meaning while exploring the role of imagery in fostering an emotional connection. Bringing to life the complexity of the animal kingdom, his work ranges widely across species, united by a distinctive stylisation reflecting an interest in how we better connect people to the natural world.

He has four major bodies of work concerning different subjects: Equus ((…)
All About Tim Flach

Thomas Wrede
Nationality: Germany
Born: 1963
Thomas Wrede was born in 1963 in Iserlohn (Germany). He studied Fine Art in Muenster and Berlin. From 1998 until 2005 he taught photography at the Kunstakademie Muenster. During the last few years numerous exhibitions presented his works in- and outside of Germany. Particularly, the solo exhibitions at the Museum Kunst der Westkueste, Alkersum (2010), the Kunsthalle Bielefeld (2010) and at the Wallraf-Richartz-Museum, Koeln (2007) and the following group exhibitions should (…)
All About Thomas Wrede

This dynamic husband-wife team have made an art of their unique strain of photography. Exuding an eerie sensuality combined with a narrative cinematic sensibility, the ambiguous nature of the characters and scenarios remind us of David Lynch and Hopper-esque landscapes. They couldn’t have landed in the photographic landscape at a more opportune moment. With the enormous interest in their work—success is (…)
All About Formento & Formento

Cathleen Naundorf
Nationality: France/Germany
Cathleen Naundorf is a French German photographer. In the late 1980s, she graduated from photography studies in Munich. She worked as a photo assistant in New York, Singapore and Paris in the following years, before she started traveling in 1993 to such destinations as Mongolia, Siberia, Gobi Desert and the Amazonas headwaters in Brazil. The results of these insightful pictures have been included in eight publications of renowned publishing houses. Inspired by her encounter (…)
All About Cathleen Naundorf

Kai Moerk
Nationality: Germany
Born: 1964
My nationality is German and I was born 1964. After graduating from the Adolf Lazi Academy near Stuttgart/Germany with a degree in media design and a job in a film studio, I tried something completely different: mountaineering, climbing and other outdoor activities. For a few years I lived completely isolated with my current wife in northern Italy. Without neighbours, TV, telephone, electricity and warm running water. The experiences and impressions in the peace and (…)
All About Kai Moerk