Share:
Country: France | Born: 1974
Born in 1974, Cédric Delsaux studied Literature and Cinema in Paris where he still lives and works. His first job after graduation was managing an antique bookshop in the 9th arrondissement of Paris. After feeding his interest for books, he decides to turn to his main passion, photography, and starts by exploring the advertising nebula as a copywriter.

In 2002, he leaves the comfort of the advertising agency to devote himself entirely to photography. Alongside his personal work he grew as an advertising photographer, signing campaigns for major agencies like DDB, Euro RSCG, Publicis, Ogilvy, BBDO, TBWA and many more.

In 2005 he receives the "Bourse du Talent", French Photography Award for the first part of the Dark Lens, based in the suburbs of Paris. Since, two other photographic series have been produced in Lille and Dubai. Spring 2011 will see the publication of a beautiful book with Lucasfilm’s seal of approval and in collaboration with Barral publications, French publisher renowned for monographs and contemporary art books.


Cédric Delsaux was born in 1974. Throughout his career he has explored the increasingly tenuous borders between fiction and reality. Initially best known for his advertising campaigns, he later became recognised for his long-term personal series.

Whether his focus is on industrial immoderation, delusions of grandeur, or uncertain dreams, with each production Cédric Delsaux strives to elaborate the methods of our madness through his unique concepts that combine false reality and true fiction.

His first series “Nous Resterons Sur Terre” [Here to Stay], was published in 2008 in France and 2009 in the USA by Monacelli Press (Random House). It presents a subjective tour of the symbolic sites of our (post-)modern world: places that are beautiful and ugly, banal and crazy all at once.

The second series “Dark Lens” was published by Éditions Xavier Barral in France in 2011, distributed by D.A.P. in the USA and translated into Japanese by X-Knowledge. George Lucas prefaced the book. Dark Lens introduces the characters from the Star Wars saga into the real world of the Parisian suburbs, Lille, or Dubai, revealing to what extent our perception of the city passes through the filter of fiction.

He then tackled “Echelle 1” [Life-size] in which he asked random passers-by to climb onto a white wooden pedestal, thus instantly transforming themselves into life-sized figurines.

In 2014 Zone de Repli followed the traces of the man from Gex. A true story of a man, who for over a decade, pretended to be something he wasn’t: a doctor and researcher with an international career. He went out every morning and wandered in the surrounding areas near where he lived waiting for nightfall. For him, this territory constituted a vast fall-back zone in which he was waiting, all alone, for the tragic end of his lies. The only way he could think of to liberate himself was to murder his whole family. Zone de Repli was published by Éditions Xavier Barral in 2014.

His latest series Back to the Stars will be exhibited at Paris Photo 2018 with East Wing. 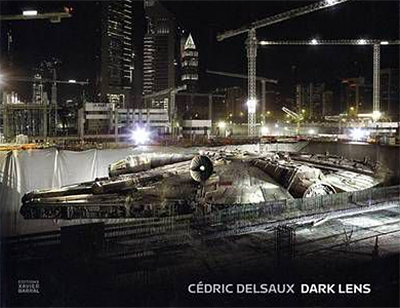 Cédric Delsaux: Dark Lens
Author: Cedric Delsaux, George Lucas
Publisher: Editions Xavier Barral
Year: 2011 - Pages: 118
Jabba the Hut lurks in the shadows of a decrepit, abandoned warehouse, his toady eyes glowing; Boba Fett looms up from the fluorescent glare of an indoor car park, poised to kill; Yoda peers out inquiringly from the window ledge of some otherwise untenanted institutional building; Han Solo's cryogenically frozen form on a slab stands, installed bizarrely in an anonymous concrete plaza. Of the many scenarios to which Star Wars fans have dispatched the films' protagonists over the years, none--not even Seth McFarlane's Family Guy homages--are as unlikely as Cédric Delsaux's. In Dark Lens, Delsaux transports Darth Vader and the whole gamut of Star Wars iconography to a post-apocalyptic, urban-suburban landscape of endless parking lots, highrises and wasteland interzones, vacant of ordinary human life. Delsaux's “mythology of banality” (as he describes it) produces images that are not just funny or preposterous, but also weirdly compelling; in their photographic plausibility they successfully incorporate Star Wars into an everyday reality that we can all recognize, but in ways that make both worlds seem strangely real and absurdly false. Delsaux's Dark Lens will captivate both film and photobook fans alike with its fantastically bizarre recasting of Star Wars on planet Earth after the apocalypse.

After his studies were completed, Peter made his (…)
All About Peter Ydeen

Lauren Welles
Nationality: United States
Born: 1968
Lauren is a freelance photographer, and former attorney, based in New York City. Her street photography has received several awards and has been exhibited at various venues around the world, including: "The Fence" at Photoville, NYC; the Museum of the City of New York, NYC; Arsenal Gallery in Central Park, NYC; PhotoLeiden, The Netherlands; Gudberg Nerger Gallery, Hamburg, DE; and the Center For Fine Art Photography, HistoryMiami Museum, and Rayko Photo Center, in the US. (…)
All About Lauren Welles

Frank Horvat
Nationality: Italy
Born: 1928
Frank Horvat is an internationally renowned fashion photographer, who has recently celebrated fifty years experience in the field. Throughout these years he has not only embraced fashion photography, but also been unafraid to experiment and adapt to new technologies, transcending the confines of photographic borders. His photography is diverse and considerably more complex than a cursory glance could reveal. He is perhaps best known for his spontaneity, trust and (…)
All About Frank Horvat

Mary Anne Mitchell
Nationality: United States
Mary Anne Mitchell is a fine art photographer working primarily with analog processes. Her most recent series Meet me In my Dreams is shot using wet plate collodion. The images depict situations, often mysterious, which evoke her southern roots. She recently was a finalist in the 8th Edition of the Julia Margaret Cameron Awards and has been invited to exhibit some of this series in the 4th Biennial of Photography to be held in Berlin. Her work has been exhibited in solo and (…)
All About Mary Anne Mitchell

Espen Rasmussen
Nationality: Norway
Born: 1976
Espen Rasmussen is based at Nesodden, close to Oslo, Norway. He works as a photo editor in VG Helg — the weekend magazine of the biggest daily Norwegian newspaper VG. At the same time he is constantly working on his own photo projects. Rasmussen focuses specially on humanitarian issues and the challenges related to climate change. He is represented by Panos Pictures. In 2008 he was listed by Photo District News on the prestigeous PDNs 30 — New and Emerging Photographers to (…)
All About Espen Rasmussen