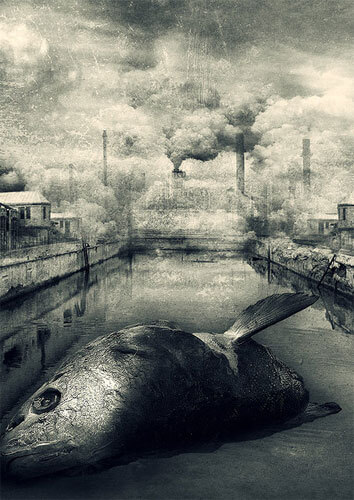 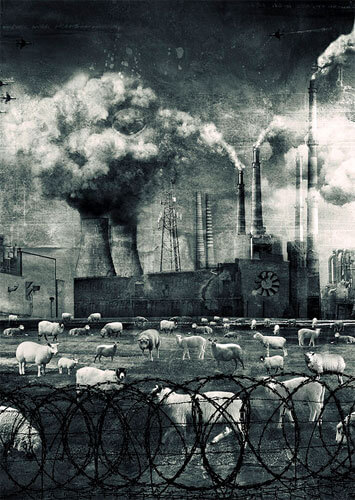 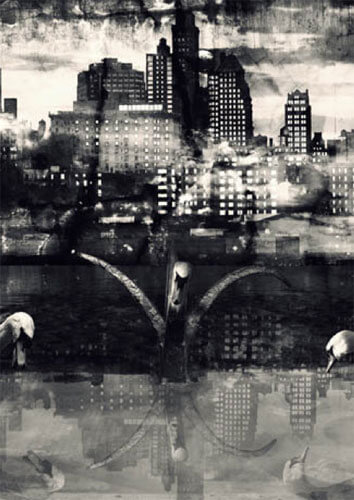 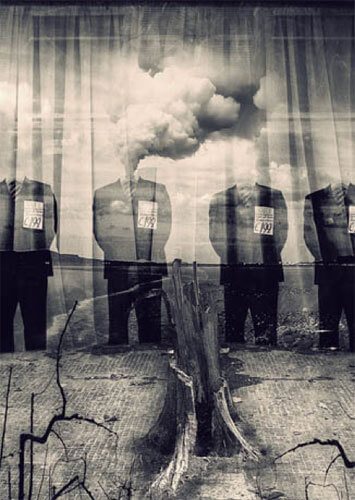 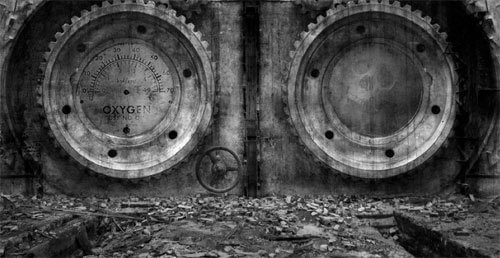 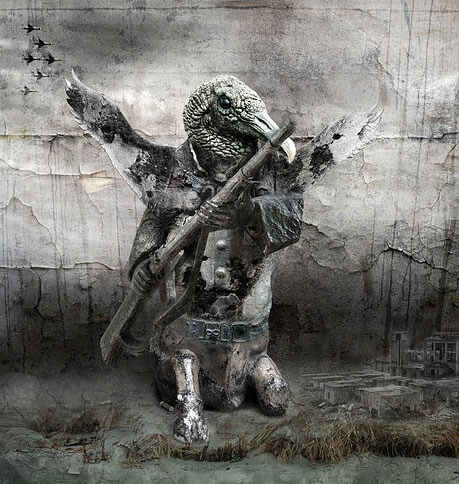 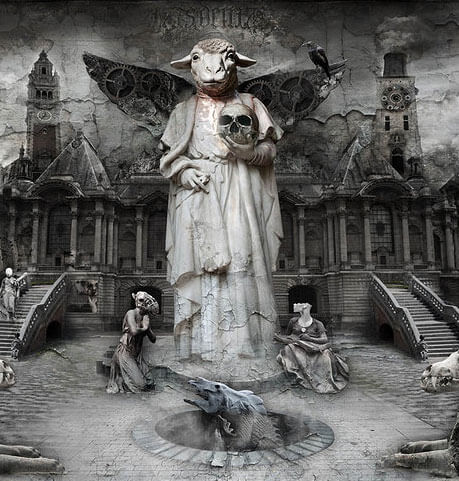 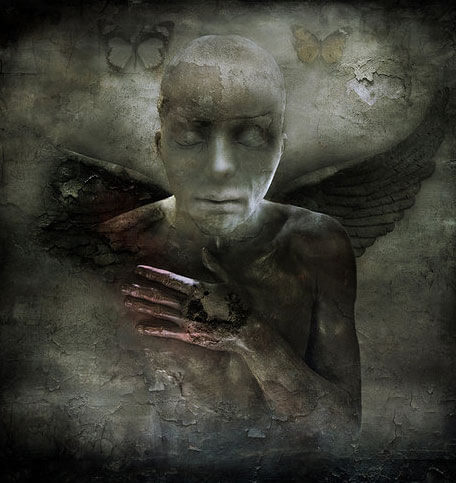 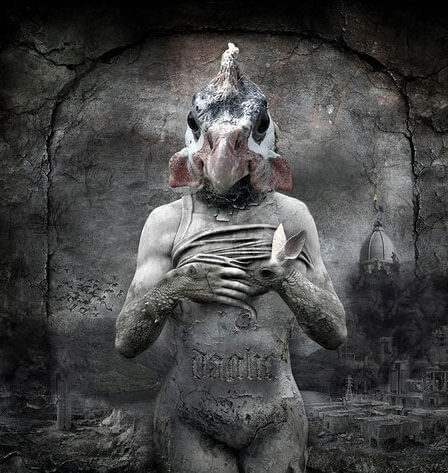 PreviousNext
© Marcin Owczarek
Country: Poland | Born: 1985
My art has always been focusing on condition of our globe and the condition of man. My antiutopian, critical photography is based on the anthropological research. I focus on exploring and interpreting the impact of: new technologies, bio-science, unconscious, fears, morals, social situations, behaviors, habits, rituals, biological changes, the use of animals, depression in urban envi...ronments, destruction of the soil, overpopulation, deforestation, universal famine and - over human life. As a result, I create the image of the 21 century and the image of our current society. In this way, by commenting behaviour of human individuals I want to indicate that: Man is imperfect. Man is a savage, greedy rebel of Nature, living between the insanity and lunacy, away from his true nature. Man live in the play cage because he was captured by Illusions of this world: welfare tyranny, desire of possessing material things, consumption, jealousy, hate...what all in all led him to the broken relationship with the globe and other human beings. As a result I stress the present process of dehumanization, mechanization and standardization of human race, false norms and illusional values that was given for the truth to the society by religion, governments,laws,propaganda, false mirror of the television...etc. In my opinion, nowadays it is essential to articulate this kind of behavior, because the way which the present world run, might guide the human species: firstly- into a total slavery, then to new nuclear era, and finally to the total extinction...There is number of potential scenarios, but one of them is definitely Total Extinction... I admire the way of dadaism as well as surrealism. My spirit flies with counterculture and the idea of transgression. I regard my critical collages as the prediction of human degradation, and as a consequence - 'Apocalypse'....... Many wise people said that before but I will repeat: we are responsible for this world and for other human beings, and in our hands is decision: Do we want to live in coexistence or do want to reproduce another monsters to this world who will fight against each other in another nuclear war... What are the crucial implications of this? - The world's Future. "You pays your money and you takes your choice".
Marcin Owczarek, Lier 2011
Website:
marcinowczarek.wix.com
Share:
Selected Work:
Marcin Owczarek

Beatrix Jourdan
Nationality: Hungary
Beatrix Jourdan (Bea Mészöly) was born in Budapest, attended The Hungarian University of Fine Arts, and is both a freelance graphic designer and photographer. Photography has been exhibited in solo and group shows in Luxembourg, Belgium/Brussels, London, Hungary, Italy, Kuala Lumpur, Senegal/Dakar Argentina and the USA. She is currently based in Dakar, Senegal.

"Being a professional graphic designer I worked with photos shot by others, making art catalogues (…)
All About Beatrix Jourdan

Mina Teslaru
Nationality: Romania
Born in Bucharest, Romania, Mina spent her childhood in theatre, amongst preparing actors, dusty props and costumes, and most summers by the Black sea, capturing the world with her plastic panoramic camera.

Fascinated by movies and cinematography, she frames the world in overexposed imagery that reflects the luminosity of her vision. Since her move to NYC, she fell irreversibly in love with Coney Island, a subject that has been the center of her work for the past 3 (…)
All About Mina Teslaru

K.K. DePaul
Nationality: United States
K.K. DePaul is an explorer of secrets, combining and recombining bits and pieces of memory to make sense of her family stories.

I have always been fascinated by multiple interpretations, double exposures, and the ambiguities that arise depending on which character is telling the story. My process begins with a collection of elements...images...writing. As I move the elements around, a visual narrative begins to take shape, signaling a new understanding of parallel (…)
All About K.K. DePaul

Martin Bogren
Nationality: Sweden
Born: 1967
Martin Bogren was born 1967 in Sweden and is now based in Malmo. His photographic practice has developed by a personal documentary tradition in the early 90’s – photographing bands and artists. His first book The Cardigans_- Been It was published in 96 after several years touring with the band.

Swedish born Martin Bogren first came to attention in 1996 with his book on the Swedish band, The Cardigans, who he photographed over several years while touring (…)
All About Martin Bogren

Carol Beckwith
Nationality: United States
Thirty years of work on the African continent have carried Carol Beckwith and Angela Fisher across 270,000 miles and through remote corners of 40 countries in exploration of more than 150 African cultures. In the process, this team of world-renowned photographers has produced fourteen widely acclaimed books and made four films about traditional Africa. They have been granted unprecedented access to African tribal rites and rituals and continue to be honored worldwide for (…)
All About Carol Beckwith

Aurore Valade
Nationality: France
Born: 1981
Aurore Valade is a French photographer born in 1981. She creates images that play with iconic register of scenography. In these elaborate stagings, we are often confronted with clichés, meaningful reflections of a social, economic or cultural situation in contemporary life.
All About Aurore Valade

Tamara Reynolds
Nationality: United States
Tamara graduated with a BFA degree and has been enjoying a successful career in commercial photography for the past 25 years.

She has been recognized commercially, garnering several awards such Communication Arts Award, International Photography Award, American Photography Award 29 and 30. Recently her pursuits for her personal project of the Southern vernacular, titled Southern Route, has been recognized by The Review Santa Fe 100, Photo Lucida 2012, 2013 Finalist (…)
All About Tamara Reynolds

Thomas Wilder
Nationality: United States
Born: 1996
Through his practice in digital photography and site specific installation, Thomas asks questions of perception, meaning-making, attention, the photographic image, and the particularity of space. Influenced most strongly by conceptual artists of the 70s and 80s, Thomas looks to make work that accompanies a broader philosophical conversation. Thomas recently graduated with a BA in Studio Art from Wheaton College, IL; he is now pursuing an MFA in photography at Rhode Island (…)
All About Thomas Wilder