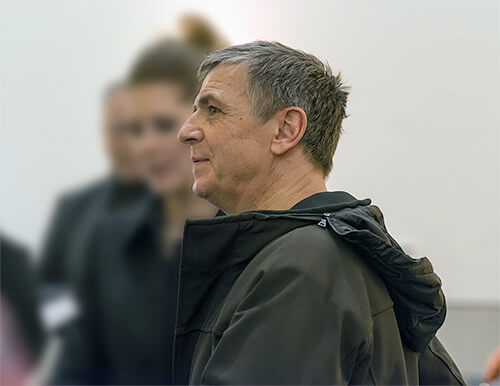 © Hpschaefer www.reserv-art.de
Country: Germany | Born: 1955
German photographer. Shortly after Gursky was born, his family relocated to Essen, and then to Düsseldorf, West Germany in 1957. Gursky’s parents ran a commercial photography studio, but Gursky had no plans to join the business. He attended the Folkwangschule in Essen (1978-80) with a concentration in visual communication and the goal of becoming a photojournalist, but was unsuccessful with finding work. Encouraged by fellow photographer Thomas Struth, Gursky entered the prestigious Kunstakademie, Düsseldorf in 1980 and in his second year began studying photography under Bernd and Hilla Becher. Although the Becher’s preferred black and white photography, Gursky only worked in color, and with the help of his friends set up a color darkroom in 1981. By integrating the “systematically objective and rigorously conceptual”* documentary style of the Bechers’ photography with his taste for color, Gursky began to explore the contemporary culture of the world. Gursky had his first exhibition in 1981 featuring his series Pförtnerbilder (1981-5), a collection of works depicting pairs of German security guards. After graduating from the Kunstakademie in 1987, Gursky focused on photographing urban landscapes, both interior and exterior, and began to increase the size of his large format prints. Gursky had his first solo gallery show in 1988, at the Galerie Johnen & Schöttle. A rise of interest in the international art market for photography paired with the growing popularity of the Becher’s circle brought Gursky much commercial success. Gursky began the infamous May Day series (early 1990’s) in reaction to the biggest economic slump of recent history. A combination of the collapsing stock market with the growth of a dynamic drug-addicted rave scene inspired this photographic compilation. During this time, Gursky traveled to a number of international cities such as Tokyo, Los Angeles, Stockholm, Cairo and Hong Kong in order to photograph the masses – busy stock exchanges, manufacturing plants, industrial-looking apartment buildings, crowded arenas and swarming clubs. Gursky was one of the first contemporary photographers to use new digital photo editing techniques on his large format photographs. In 1999, Gursky created 99 Cent, the first in a series of photographs of discount stores, which “was quickly recognized as one of his most important works and placed in major museums around the world.”* Gursky’s retrospective at the Museum of Modern Art, New York in 2001, which included the work May Day IV, confirmed him as one of the greatest artistic visionaries of his generation.
Source Sotheby’s, London
Galleries:
Matthew Marks Gallery
The Aaron Gallery
Share:
Selected Books: 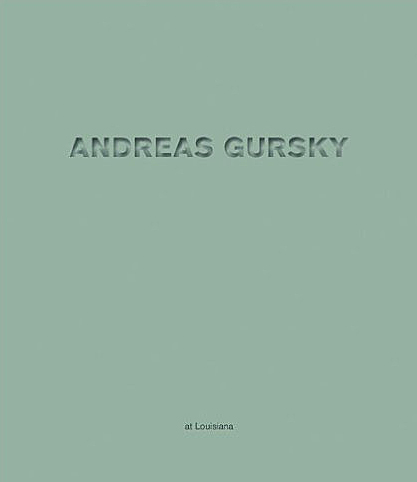 Andreas Gursky
Author: Frederik Stjernfelt, Poul Erik Třjner, Andreas Gursky
Publisher: Hatje Cantz
Year: 2012 - Pages: 140
Andreas Gursky (born 1955) is one of the most celebrated living photographers. His images of contemporary culture's excesses and sublimities rival the greatest history paintings for size and narrative richness; more than any of his contemporaries, Gursky has amply fulfilled what Samuel Beckett once declared the task of the artist to be: "to find a form to accommodate the mess." His epic photographs enumerate with relentless acuity the proliferation of goods and commodities in our era-perhaps mostly famously in his 99-cent series of photographs of the endless aisles of American 99-cent stores. In the 1990s, Gursky began to use digital technology to intensify this acuity, compelling every inch of the visual data in his photographs to an almost unbearable pitch of equivalence and detail. This volume offers a new overview of Gursky's career, featuring both classic series and his most recent bodies of work. Included here in full color are such iconic images as the 99-cent stores; the Formula 1 racetracks of Bahrain; the Tokyo and Chicago stock exchanges; the subterranean locker rooms of German miners; as well as his newest photographs, such as the Ocean series (2010) and his shots of a fashion show by designers Viktor and Rolf (2011). 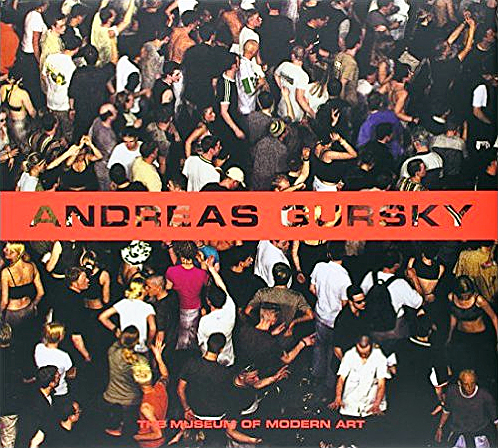 Andreas Gursky
Author: Peter Galassi, Glenn D. Lowry, Andreas Gursky
Publisher: The Museum of Modern Art, New York
Year: 2002 - Pages: 196
The big, bold, seductive, and surprising color photographs of German photographer Andreas Gursky set forth a stunning image of our contemporary world of high-tech industry, international markets, big-time sports, fast-paced tourism, and slick commerce. Tracking the zeitgeist from his native Germany to such far-flung places as Hong Kong, Brasilia, Cairo, New York, Shanghai, Stockholm, Tokyo, Paris, Singapore, and Los Angeles, Gursky has earned acclaim at the leading edge of contemporary art with a polished signature style that draws upon a great diversity of ideas, precedents, and techniques. Created in collaboration with the artist, this oversize book surveys the fullness of his work to date with gorgeous colorplates, generous two-page details, and a wealth of supporting illustrations. The first in-depth study in English of Gursky's art, this book was published in conjunction with a major retrospective at The Museum of Modern Art, New York.

Now based in eastern England, the award-winning photographer has continued to expand his creative style across a range of subjects, with his images regularly appearing in exhibitions and international publications, and is a Fellow of the British (…)
All About Paul Coghlin

Hossein Fardinfard
Nationality: Iran
Born: 1985
Netherlands-based Iranian documentary photographer Hossein Fardinfard (born 1985) took an unconventional path to his profession. After majoring in cartography, geomorphology, and IT, ultimately he discovered his aptitude for visual storytelling at the age of 30.

Fardinfard came to see photography as a means for observing society more intimately, and for knowing himself more deeply in turn. He has thus come to specialize in photography that explores social (…)
All About Hossein Fardinfard

Eric Kim
Nationality: United States
Born: 1988
Eric Kim is an international street photographer currently based in Los Angeles. Through his blog and workshops, he teaches others the beauty of street photography, how to find their own style and vision, as well as how to overcome their fear of shooting strangers.

In the past he has done collaborations with Leica, Magnum, as well as Invisible Photographer Asia. He is currently an instructor at UC Riverside Extension, teaching a university-level street (…)
All About Eric Kim

Jacques Henri Lartigue
Nationality: France
Born: 1894 - Died: 1986
Jacques Henri Lartigue is 69 years old in 1963 when he first presents a selection of his many photographs taken throughout his life in New York’s MoMa. That same year there is a photo spread of his work in the famous Life Magazine issue which commemorates the death of John Fitzgerald Kennedy, and which is publicized worldwide. To his great surprise, Lartigue becomes, overnight, one of the renowned photographers of the twentieth century.

Jacques learns about (…)
All About Jacques Henri Lartigue

Branda Bancel
Nationality: United States
Brenda Bancel is the president of the Take 5 Foundation and owner of Brenda Bancel Photography LLC. She spent ten years in the advertising industry working with clients such as Apple and IBM before realizing that she wanted to focus on nonprofit work and using her own creative talent. She is a recent graduate of the New England School of Photography, where she graduated with honors in Documentary. She hopes to use photography to bring awareness to important social (…)
All About Branda Bancel

Cathleen Naundorf
Nationality: France/Germany
Cathleen Naundorf is a French German photographer. In the late 1980s, she graduated from photography studies in Munich. She worked as a photo assistant in New York, Singapore and Paris in the following years, before she started traveling in 1993 to such destinations as Mongolia, Siberia, Gobi Desert and the Amazonas headwaters in Brazil. The results of these insightful pictures have been included in eight publications of renowned publishing houses. Inspired by her encounter (…)
All About Cathleen Naundorf

Rosita Delfino
Nationality: Italy
I started getting interested in photography in 2009 and since then I have been emotionally struck by the picture's power of communication. Photography is a dimension where pictures enhance the words and become means of expression of our inner world, through the filter of our eyes they have the power of changing the reality. It is a never ending dialogue between appearing and being, a wonderful journey in the female dimension, where the body is no more bound to space and time (…)
All About Rosita Delfino

Yang Yongliang
Nationality: China
Born: 1980
Born in 1980 in Shanghai, Yang Yongliang graduated from China Academy of Art in 1999, majored in visual communication. He currently works and lives in Shanghai. He started his experiments with contemporary art in 2005, and his practice involved varied media including photography, painting, video and installation. Yang exploits a connection between traditional art and the contemporary, implementing ancient oriental aesthetics and literati beliefs with modern language and (…)
All About Yang Yongliang

Jeremy Cowart
Nationality: United States
At his core, Jeremy is an artist. Starting out as a painter first, Jeremy fell in love with the creative process. He then went on to study graphic design in college and founded his own graphic design company, Pixelgrazer, in 2001. Jeremy really only began taking pictures to bring texture into his design work. But before he knew it, he realized that photography was his true passion. So in April of 2005, Jeremy switched over to it full time and he has never looked back. In a (…)
All About Jeremy Cowart