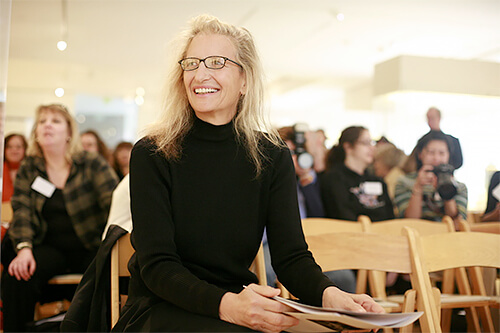 © Robert Scoble from Half Moon Bay, USA 2008
Country: United States | Born: 1949
Annie Leibovitz was born on October 2, 1949, in Waterbury, Connecticut. While studying painting at the San Francisco Art Institute, she took night classes in photography, and in 1970, she began doing work for Rolling Stone magazine. She became Rolling Stone’s chief photographer in 1973. By the time she left the magazine, 10 years later, she had shot 142 covers. In 1983, she joined the staff at Vanity Fair, and in 1998, she also began working for Vogue. In addition to her magazine editorial work, Leibovitz has created influential advertising campaigns for American Express and the Gap and has contributed frequently to the Got Milk? campaign. She has worked with many arts organizations, including American Ballet Theatre, the Brooklyn Academy of Music, and the Mark Morris Dance Group, and with Mikhail Baryshnikov. Her books include Annie Leibovitz: Photographs (1983), Photographs: Annie Leibovitz 1970–1990 (1991), Olympic Portraits (1996), Women (1999), American Music (2003), A Photographer’s Life: 1990–2005 (2006), and Annie Leibovitz at Work (2008). Exhibitions of her images have appeared at museums and galleries all over the world, including the National Portrait Gallery and the Corcoran Gallery, in Washington, D.C.; the International Center of Photography, in New York; the Brooklyn Museum; the Stedelijk Museum in Amsterdam; the Centre National de la Photographie, in Paris; and the National Portrait Gallery in London. Leibovitz has been designated a Living Legend by the Library of Congress and is the recipient of many other honors, including the Barnard College Medal of Distinction and the Infinity Award in Applied Photography from the International Center of Photography. She was decorated a Commandeur in the Ordre des Arts et des Lettres by the French government. She lives in New York with her three children, Sarah, Susan, and Samuelle.
Source Vanity Fair
Agency:
Contact Press Images
Galleries:
Edwynn Houk Gallery
Fahey/Klein Gallery
Alan Brown Gallery
Share:
Selected Books: 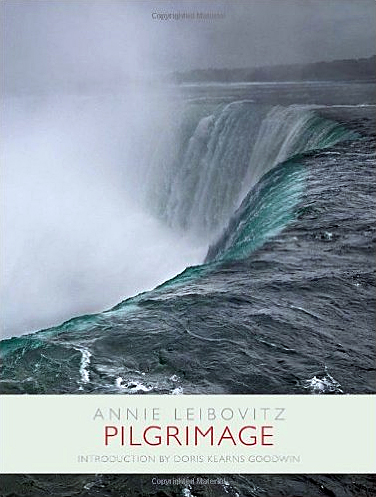 Annie Leibovitz: Pilgrimage
Author: Annie Leibovitz
Publisher: Random House
Year: 2011 - Pages: 246
Pilgrimage took Annie Leibovitz to places that she could explore with no agenda. She wasn’t on assignment. She chose the subjects simply because they meant something to her. The first place was Emily Dickinson’s house in Amherst, Massachusetts, which Leibovitz visited with a small digital camera. A few months later, she went with her three young children to Niagara Falls. “That’s when I started making lists,” she says. She added the houses of Virginia Woolf and Charles Darwin in the English countryside and Sigmund Freud’s final home, in London, but most of the places on the lists were American. The work became more ambitious as Leibovitz discovered that she wanted to photograph objects as well as rooms and landscapes. She began to use more sophisticated cameras and a tripod and to travel with an assistant, but the project remained personal. The final list of subjects is perhaps a bit eccentric. Georgia O’Keeffe and Eleanor Roosevelt but also Elvis Presley and Annie Oakley, among others. Figurative imagery gives way to the abstractions of Old Faithful and Robert Smithson’s Spiral Jetty. Pilgrimage was a restorative project for Leibovitz, and the arc of the narrative is her own. “From the beginning, when I was watching my children stand mesmerized over Niagara Falls, it was an exercise in renewal,” she says. “It taught me to see again.” 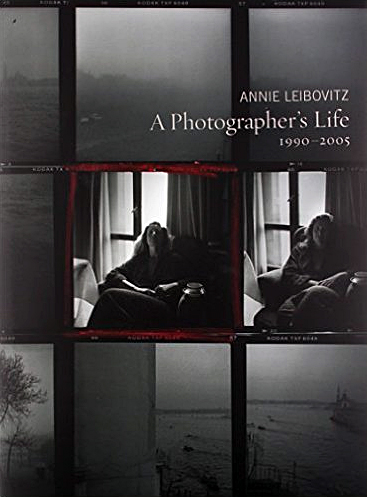 A Photographer's Life: 1990-2005
Author: Annie Leibovitz
Publisher: Ballantine Books Inc.
Year: 2010 - Pages: 472
“I don’t have two lives,” Annie Leibovitz writes in the Introduction to this collection of her work from 1990—2005. “This is one life, and the personal pictures and the assignment work are all part of it.” Portraits of well-known figures–Johnny Cash, Nicole Kidman, Mikhail Baryshnikov, Keith Richards, Michael Jordan, Joan Didion, R2-D2, Patti Smith, Nelson Mandela, Jack Nicholson, William Burroughs, George W. Bush with members of his Cabinet–appear alongside pictures of Leibovitz’s family and friends, reportage from the siege of Sarajevo in the early Nineties, and landscapes made even more indelible through Leibovitz’s discerning eye. The images form a narrative rich in contrasts and continuities: The photographer has a long relationship that ends with illness and death. She chronicles the celebrations and heartbreaks of her large and robust family. She has children of her own. All the while she is working, and the public work resonates with the themes of her life. 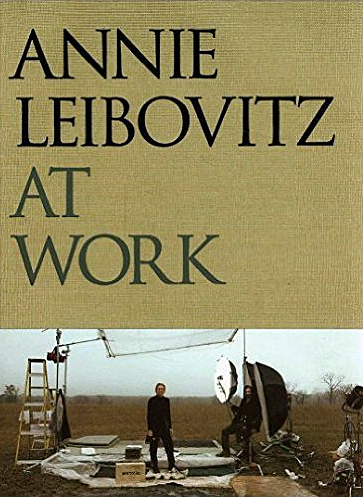 Annie Leibovitz at Work
Author: Annie Leibovitz
Publisher: Jonathan Cape ltd
Year: 2009 - Pages: 240
The celebrated photographer Annie Leibovitz, author of the New York Times bestselling book A Photographer's Life, provides the stories, and technical description, of how some of her most famous images came to be. Starting in 1974, with her coverage of Nixon's resignation, and culminating with her controversial portraits of Queen Elizabeth II early in 2007, Leibovitz explains what professional photographers do and how they do it. The photographer in this instance is the most highly paid and prolific person in the business. Approximately 90 images are discussed in detail -- the circumstances under which they were taken, with specific technical information (what camera, what settings, what lighting, where the images appeared). The Rolling Stones' tour in 1975, the famous nude session with John Lennon and Yoko Ono hours before Lennon was killed, the American Express and Gap campaigns, Whoopi Goldberg in a bathtub of milk, Demi Moore pregnant and naked on the cover of Vanity Fair, and coverage of the couture collections in Paris with Puff Daddy and Kate Moss are among the subjects of this original and informative work. The photos and stories are arranged chronologically, moving from film to digital. 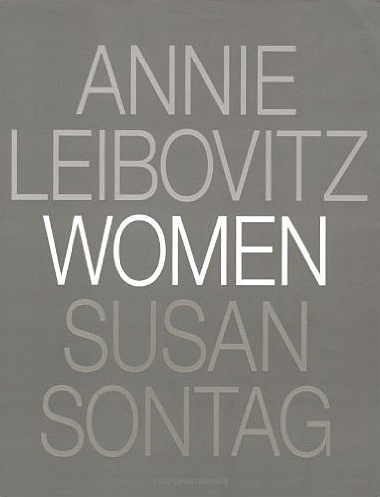 Annie Leibovitz: Women
Author: Susan Sontag, Annie Leibovitz
Publisher: Random House
Year: 1999 - Pages: 248
The photographs by Annie Leibovitz in Women, taken especially for the book, encompass a broad spectrum of subjects: a rap artist, an astronaut, two Supreme Court justices, farmers, coal miners, movie stars, showgirls, rodeo riders, socialites, reporters, dancers, a maid, a general, a surgeon, the First Lady of the United States, the secretary of state, a senator, rock stars, prostitutes, teachers, singers, athletes, poets, writers, painters, musicians, theater directors, political activists, performance artists, and businesswomen. "Each of these pictures must stand on its own," Susan Sontag writes in the essay that accompanies the portraits. "But the ensemble says, So this what women are now -- as different, as varied, as heroic, as forlorn, as conventional, as unconventional as this."

Lukas Holas
Nationality: Czech Republic
I am a small-town photographer and a graphic designer from the Czech Republic. I have occasionally been taking photos of everything that comes along - people, animals, macro and landscape ... for about 6 years. My dream is taking pictures of wild and exotic animals in their natural environment. So far, however, workload, a tight family budget and most of all being an active father of three children do not allow me to fulfill it.

I can only combine business with (…)
All About Lukas Holas

After studying cinema and photography at Westminster University (Polytechnic of Central London), Vanessa shares her time between photography and teaching. She then fully devotes herself to photography and lives for about 10 years in the Balkans and Turkey.

She joins Agence VU in 2005,and the Gallery VU in 2009. Laureate of numerous prizes, including the World Press Photo (Amsterdam) (…)
All About Vanessa Winship

Lee grew up in Ottawa, Illinois and went to the Culver Military Academy in Culver, Indiana for high school. He earned a degree in chemical engineering from Lehigh (…)
All About Russell Lee

Martin Parr
Nationality: United Kingdom
Born: 1952
Martin Parr is one of the best-known documentary photographers of his generation. With over 100 books of his own published, and another 30 edited by Parr, his photographic legacy is already established.

Parr also acts as a curator and editor. He has curated two photography festivals, Arles in 2004 and Brighton Biennial in 2010. More recently Parr curated the Barbican exhibition, Strange and Familiar.

Michael Kenna
Nationality: United Kingdom
Born: 1953
Michael Kenna was born in Widnes, England in 1953. As one of 6 children born to a working class Irish-Catholic family, he initially aspired to enter the priesthood but his passion for the arts led him to The Banbury School of Art where he studied painting and then photography. Later he attended The London College of Printing and began working as a photographer and artist. He moved to San Francisco in 1977 where he was astounded by the number of galleries the city (…)
All About Michael Kenna

Mustafa Dedeoglu
Nationality: Turkey
Born: 1978
He was born at Uskudar - Istanbul, he started to live in Istanbul after graduated from Industrial engineering. He has been interested in taking photograps for 5 years. The main purpose sharing his works is to awake different senses on watchers . He contunies to live the same density as his first photos. He avoids conscientiously to abuse the facts as human feelings on his human photos. He enjoys taking different shots like giving photos of the subject clearly and sometimes (…)
All About Mustafa Dedeoglu

Bob Krist
Nationality: United States
Bob Krist is a freelance photographer who worked regularly on assignment for magazines such as National Geographic Traveler, Smithsonian, and Islands. These assignments have taken him to all seven continents and have won awards in the Pictures of the Year, Communication Arts, and World Press Photo competitions.

Bob is a Sony (…)
All About Bob Krist

Idan Hojman
Nationality: Israel
Born: 1980
Idan Hojman was born In Israel in 1980. He started making photography at the age of 21 while traveling in Asia. Idan uses a Rolleiflex analogical camera of medium format, mainly shooting in Black & White. He currently lives in Barcelona, Spain.

"For me photography is a form of meditation, a simple observation of what is happening around us, a way to connect with the present moment from instant to (…)
All About Idan Hojman

Born in the West Midlands in 1981, Jon Tonks studied product design before becoming a staff photographer for a local newspaper. He moved to London and undertook a Master's degre in Photojournalism & Documentary Photography at London College of Communication. and it was during his studies that he undertook a trip to Ascension Island, which would be the starting point for the Empire project.

Hase was born in Döhlen bei Leipzig, Germany. She studied typography and commercial art from 1924 to 1929 at the School of Applied Arts, and later at the Städelschule, under, among other teachers, Paul Renner and Willi Baumeister.