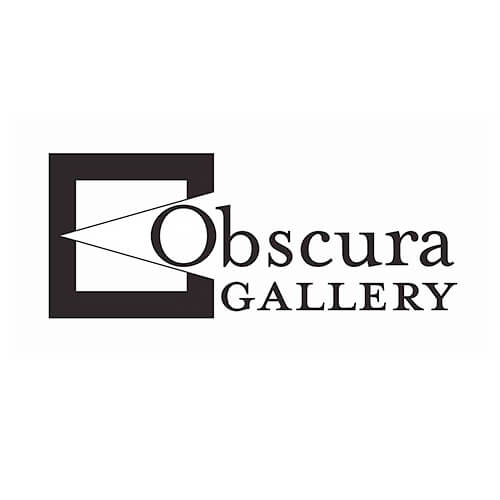 We are thrilled to share an exhibition of vintage photographs by Ernest Knee, a well-known photographer and cultural figure who lived in Santa Fe in the 1930's and 1940's. Knee is best known for his images of northern New Mexico and other southwestern cultural landscapes, Native American dances, and many other profound Southwest locations which reveal a remarkable visual record of the Southwest between 1930-40, comprised into two books: Santa Fe, N.M. (1942, Hastings House) and Ernest Knee in New Mexico (2005, Museum of New Mexico Press). Also included in the exhibition will be a selection of photographs from Mexico of which were published in his book, Mexico - Laredo to Guadalajara (1951, Hastings House). 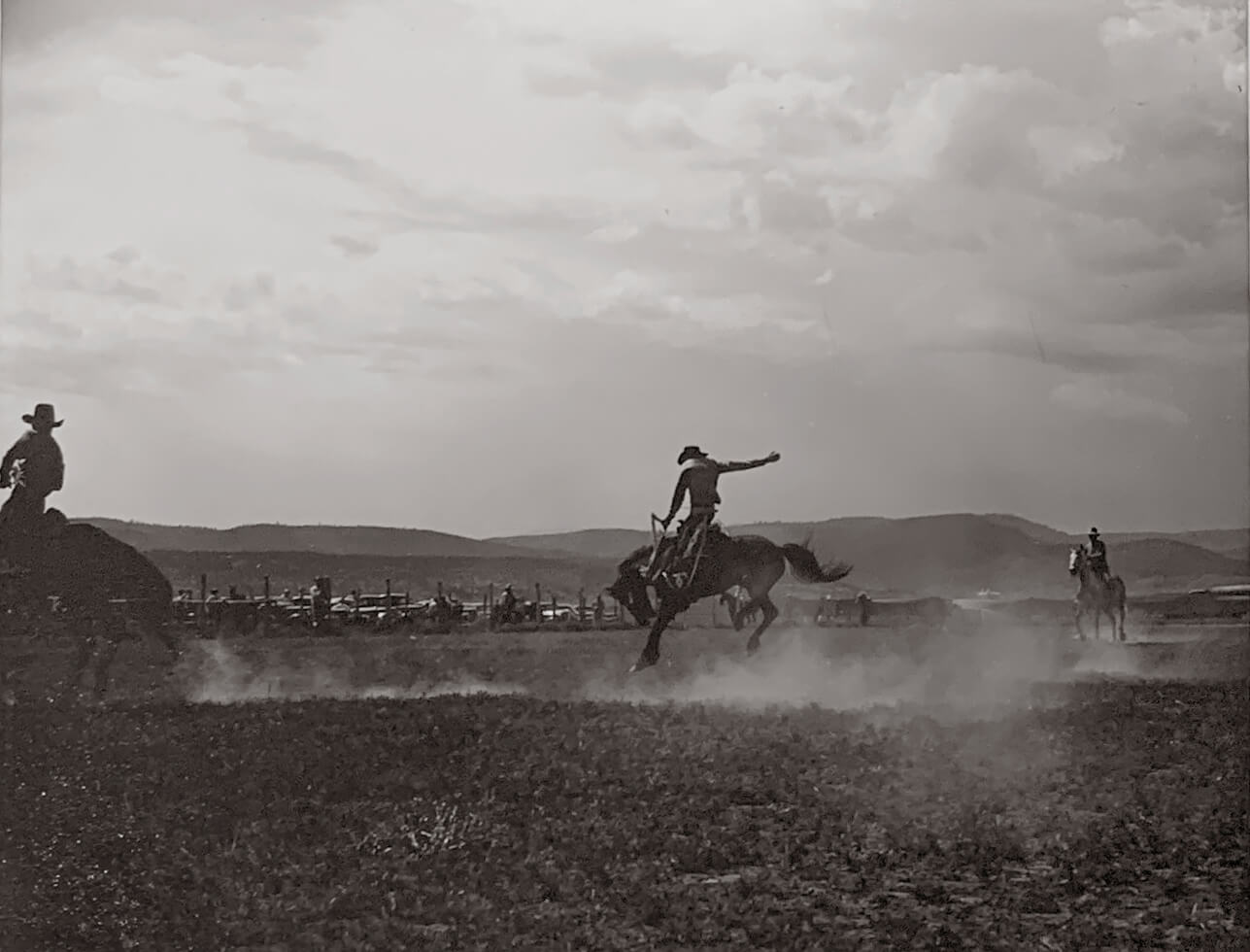 Ernest Knee was born in 1907 in Montreal, Canada. Ernest descended from a long line of boat builders, fishermen, and sea captains and wound up serving in the Canadian marines at 19, also the same time he got his first Eastman folding camera. Ernie had contracted rheumatic fever at age 11 and while he did recover, he felt the long-term effects of the disease throughout his life. A few years later he contracted tuberculosis and after this time he and his mother moved to Tucson so he could recover and gain back strength. Once healed, his mother moved back to Canada and it was at this time, around 1930, that Ernie met his first love and eventual wife, Virginia Shnaufer, who was an artist and nurtured his photography. That following year they moved to Santa Fe, New Mexico, a place in which held a vision for him of something unaffected and pure, where one could live a simpler life.

When I first came to the southwest in 1930 I had rheumatic fever had been in a sanatorium in Montreal for over a year and the doctors told my parents that I probably only had one year to live. My parents told me that I could do whatever I wanted too. I wanted to see the great southwestern United States that I had seen pictures of and read stories about. You must understand, living with this in mind made me see everything as singularly beautiful. Beautiful and transitory. There's no guarantee that any one of us is going to live another hour. Everyone should live in this state of mind, you know; you sure wouldn't stay angry for long! I had a passion to take photographs of the life and scenery around me while it still existe,d while I still existed. - from the Ernest Knee interview by Andrew Smith, 1977 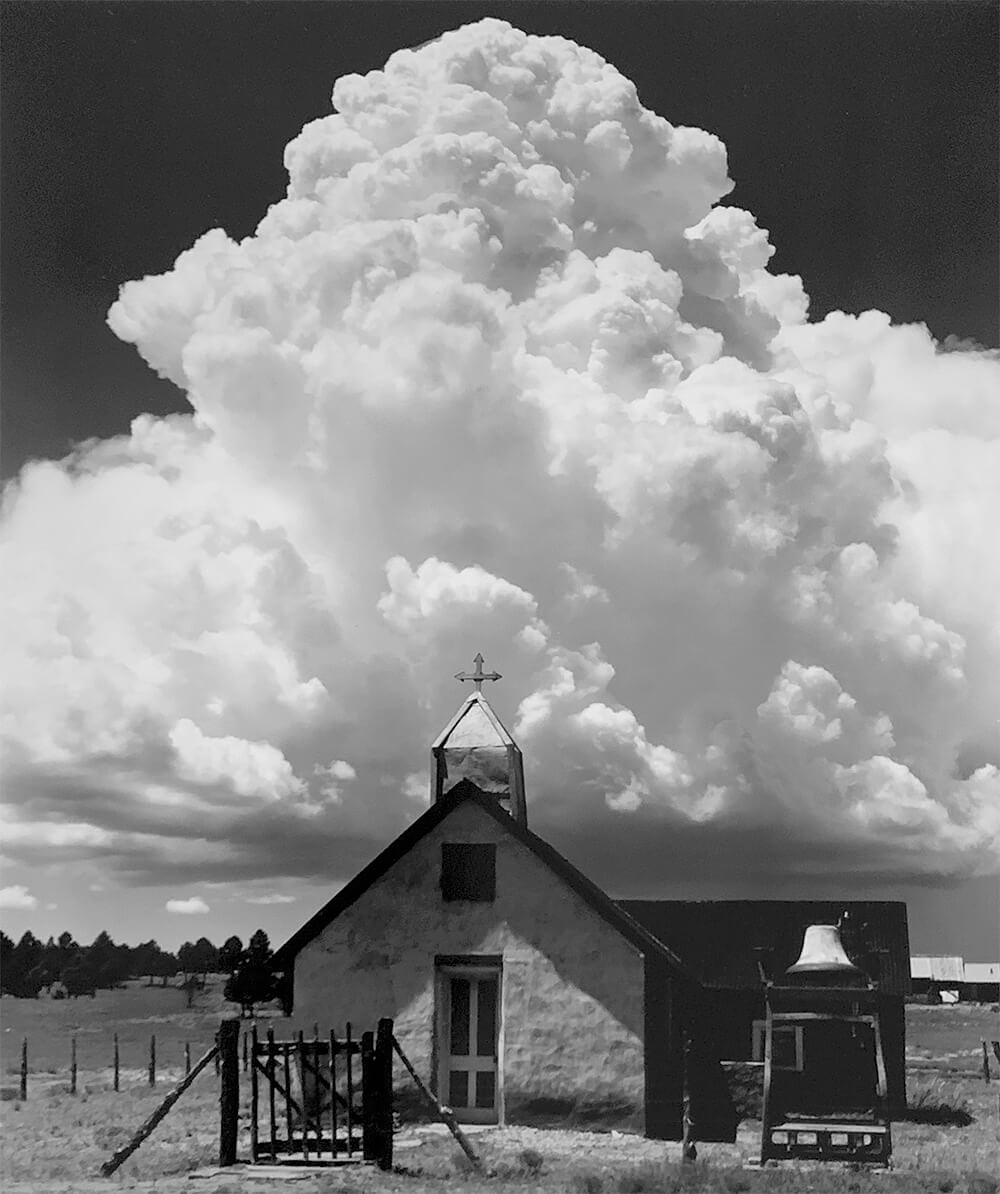 In 1916, Taos became a central hub for artists, where Mabel Dodge Luhan and her husband from Taos Pueblo, Tony Luhan had created an incredible residency of sorts for artists from all disciplines all over the country to visit and create. They hosted writers, artists and musicians such as Mary Austin, Willa Cather, DH Lawrence, George O'Keeffe, Leopold Stokowsky, and photographers including Edward Weston, Paul Strand, and Ansel Adams. Oftentimes Ernie was aided in his quest for pictures by Tony Luhan, who had friends everywhere and often drove Mabel's guests to one pueblo or another as guide and interpreter and he photographed the traditional dances, costumes, and people of the Indian Pueblos. His photos of the Devil Dancers at Zia Pueblo were the first record of their dance and were published in Life magazine in 1937.

Good-humored and hospitable, the Knees had many visitors stay with them in their house on Camino Del Monte Sol, among them Edward Weston whom Ernie first met in 1932 through Willard Nash. Weston became a great friend and would use Ernie's darkroom when he was in town. "Ford gave him a car when he worked for them," Ernie said. "We would drive all over the countryside, stop, get out of the car at the same time, and always stand back to back, shooting in opposite directions." 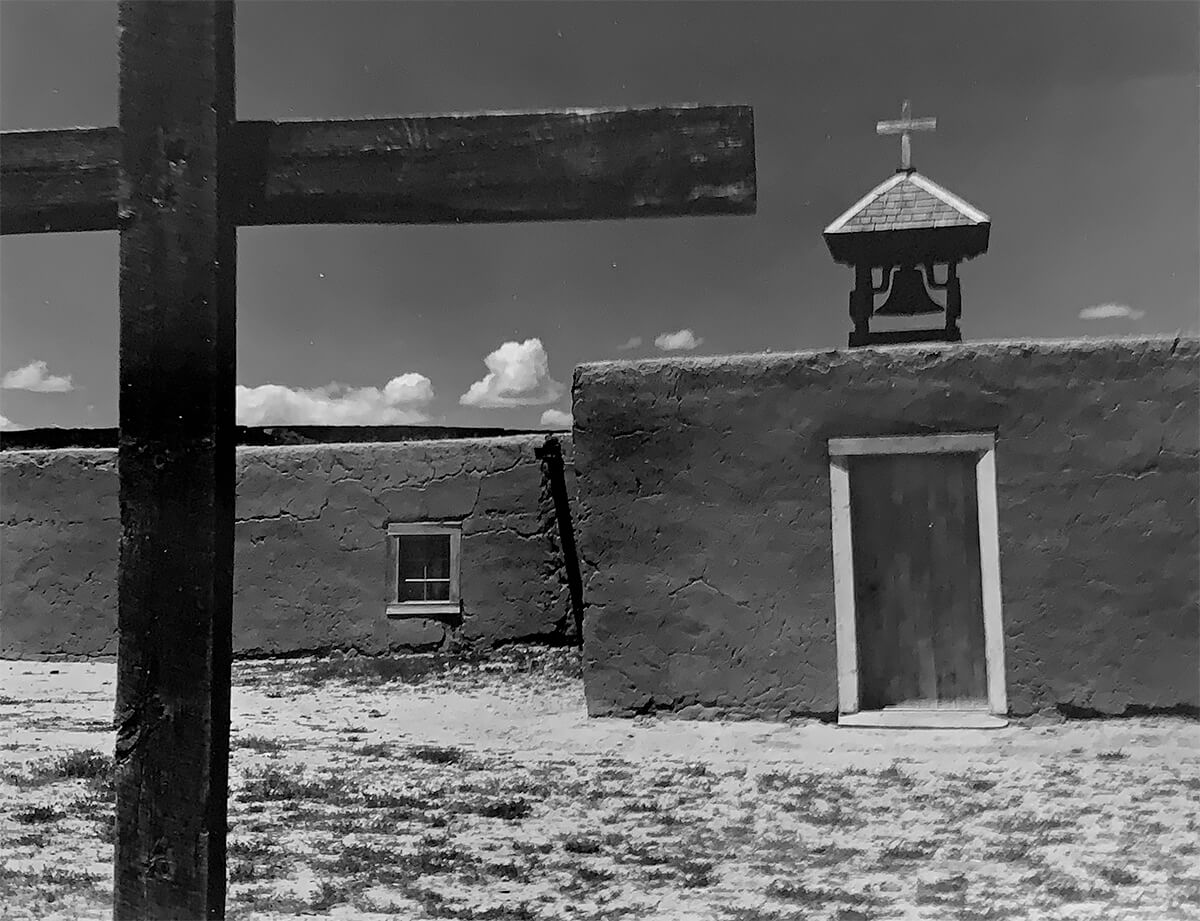 Perhaps intrigued and encouraged by Paul Strand and Edward Weston who had gone to Mexico before him, Ernie decided to set off and see some of that great country for himself in 1941. He focused on a route that led from Laredo to Guadalajara, taking in the sights and old settlements of Monterrey and Villagran, then veered southwest through the mountains to the Valley of Mexico, and finally went west through Morelia and Chapala. He noted with pleasure the relaxed pace of life enjoyed by the Mexicans and their attunement with nature, the pyramids of Teotihuacan, and the helpfulness of the people he met, but he frequently had to convince them that he "was not one of those Americanos [who] must get to and from places in a dreadful hurry." These images, nearly 100, were published in the book, Mexico: Laredo to Guadalajara, (Hastings, New York, 1951).

Like many of his Anglo contemporaries, Knee was smitten with Santa Fe's distinctive architecture, crafts traditions, and landscape. Knee was part of the Santa Fe artist community that included Gustave Baumann, and Will Shuster and he was friends with many of the artists who visited the area regularly (John Sloan, Edward Weston, Ansel Adams, etc.). Ernie was a great afficionado ofthe Santa Fe fiestas throughout the 1930's, watching Shuster build Zozobra and photographing the process several times. He enjoyed taking pictures and films of the parades, musicians, friends and visitors alike, dressed up in their fiesta finery. Within a few years, his documentary films were also shown by Pathe News in movie theaters and included his photographs made on the Navajo reservationfor the documentary film called Navajoland. His three short documentaries are called; Indian Rhythm (Taos Pueblo dances), Navajo Fair at Shiprock, and Santa Fe Area Celebrations, all of which he donated to the State of New Mexico Photographic Archives. 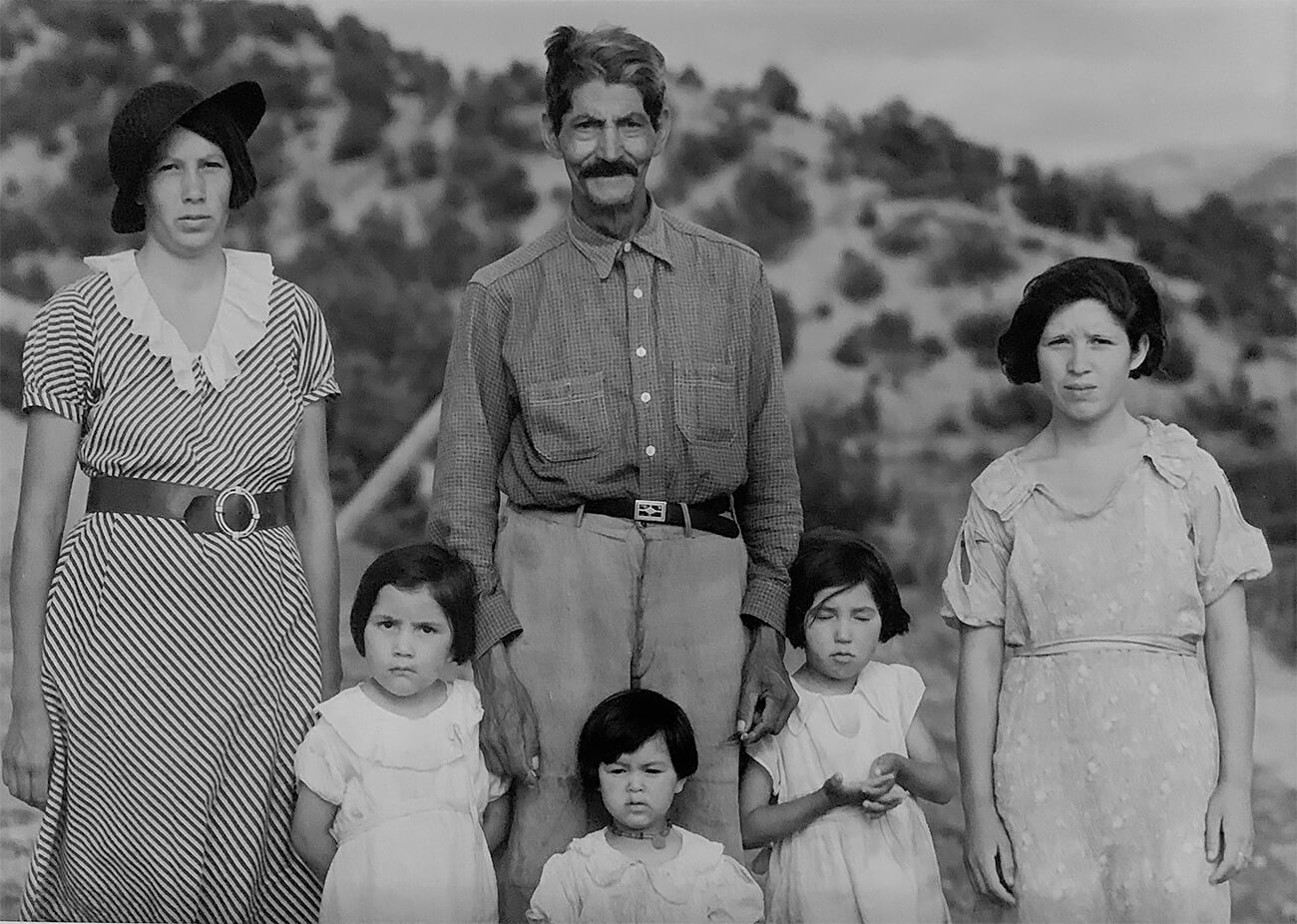 His photographic output was prodigious, with photos in local shows; a touring United States WPA exhibition; many printed in books and magazines, and a couple of his images winning awards in advertising circles. A few exhibitions were financed by the State Department and traveled around South America during 1944-45. In subsequent years, his freelance status with Pathe News kept Ernie going when other financial sources were in short supply. With literally hundreds of photos taken in and around Santa Fe in the previous decade, he gathered the many faces of his adopted hometown, brooding landscapes, area churches, and small town streets, and set them in a small pictorial book entitled Santa Fe, published in 1942.

When the war came on, Ernie moved to California and worked for Howard Hughes, creating his photography department, remarrying, and creating a family. It was in 1949 when he moved back to Santa Fe after traveling to Venezuela that he realized the market for photography had come to a standstill. He wound up investing in his wood-working skills and the next twenty years created a wooden door company, Spanish Pueblo Doors, in downtown Santa Fe from 1950-1970 until he sold the business and returned to his passion for photography. By this time, he was almost unknown in the art world. Undeterred, he set up a darkroom and began printing and exhibiting the photographs of his earlier years. Soon he was having shows all over the country with major photographers, including Laura Gilpin (Masters of New Mexico) at the Colorado Photographic Arts Center. His first love had always been photography, and in interviews during this period he was fond of saying his life had never been better. When Ernie died at age 75, twenty-two major museums had exhibited and/or acquired collections of his work including the George Eastman House, Rochester, NY; Museum of Modern Art, NY; Center for Creative Photography, Tucson, AZ; Santa Barbara Museum of Art, CA; Los Angeles County Museum of Art, CA; Princeton University of Art, Princeton, NJ; New Orleans Museum of Art, LA; University of New Mexico, NM; New Mexico Museum of Art, Santa Fe, NM; Chicago Art Institute: among others.

More information about the exhbition