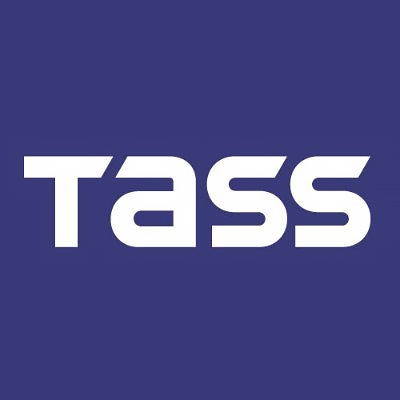 Photojournalists Diego Ibarra Sánchez, Josh Edelson, Tao Liang and Ilya Pitalev chosen as the winners of Russian Foreign Minister Sergey Lavrov's special prize. The names of the winners of the international professional photo contest News Photo Awards. Overcoming COVID, organized by TASS Russian News Agency, have been announced. The ceremony unveiling the winners of the best photographic works took place in the TASS press room, on March 11, 2021, the one-year anniversary of the announcement of the coronavirus pandemic by the World Health Organization.

Brais Lorenzo Couto, a press photographer from Spain's EFE News Agency, whose work Birthday has been chosen as the contest's Grand Prize winner, will receive the top monetary award of $10,000. 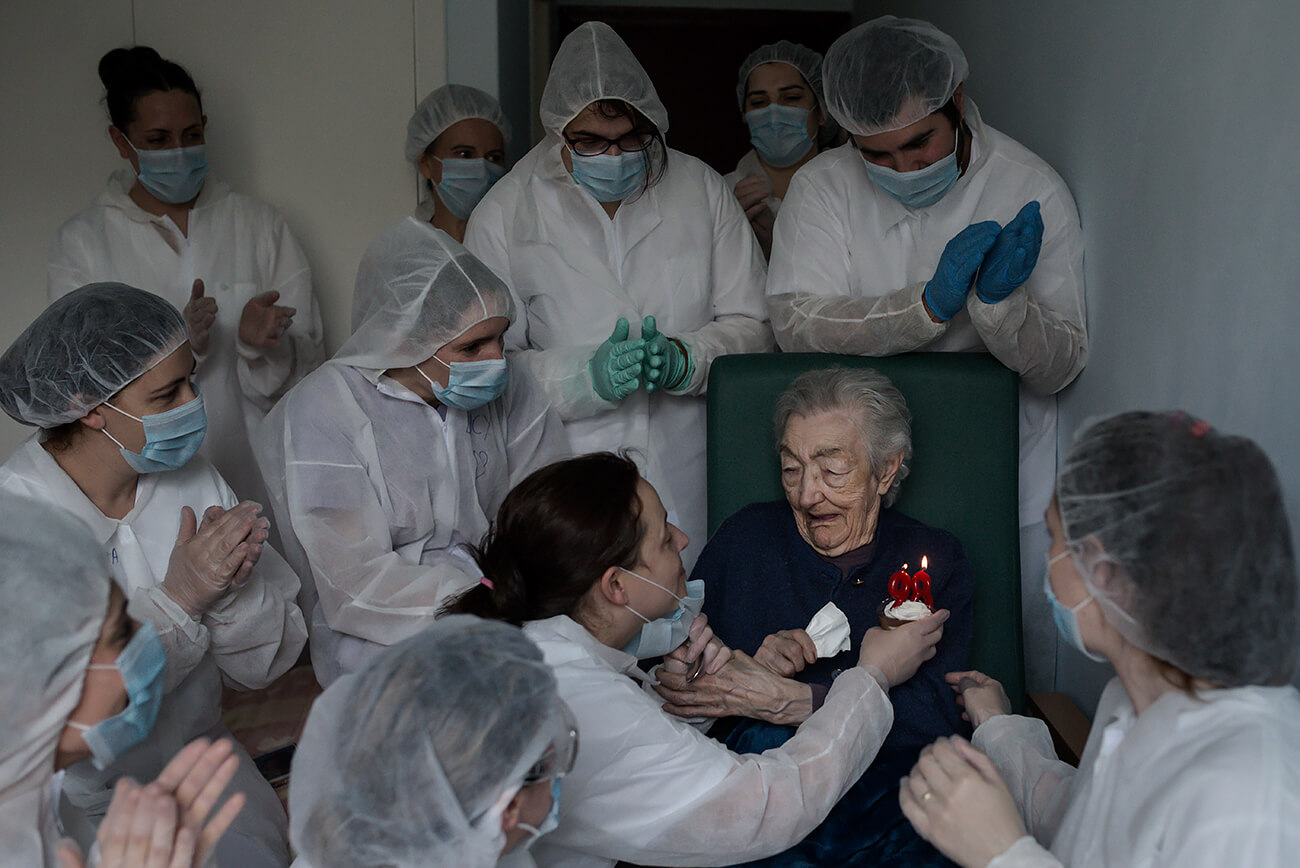 Ilya Pitalev, a photojournalist from the Rossiya Segodnya news agency (Sputnik), whose image The Sacrament won the Single Photo category. 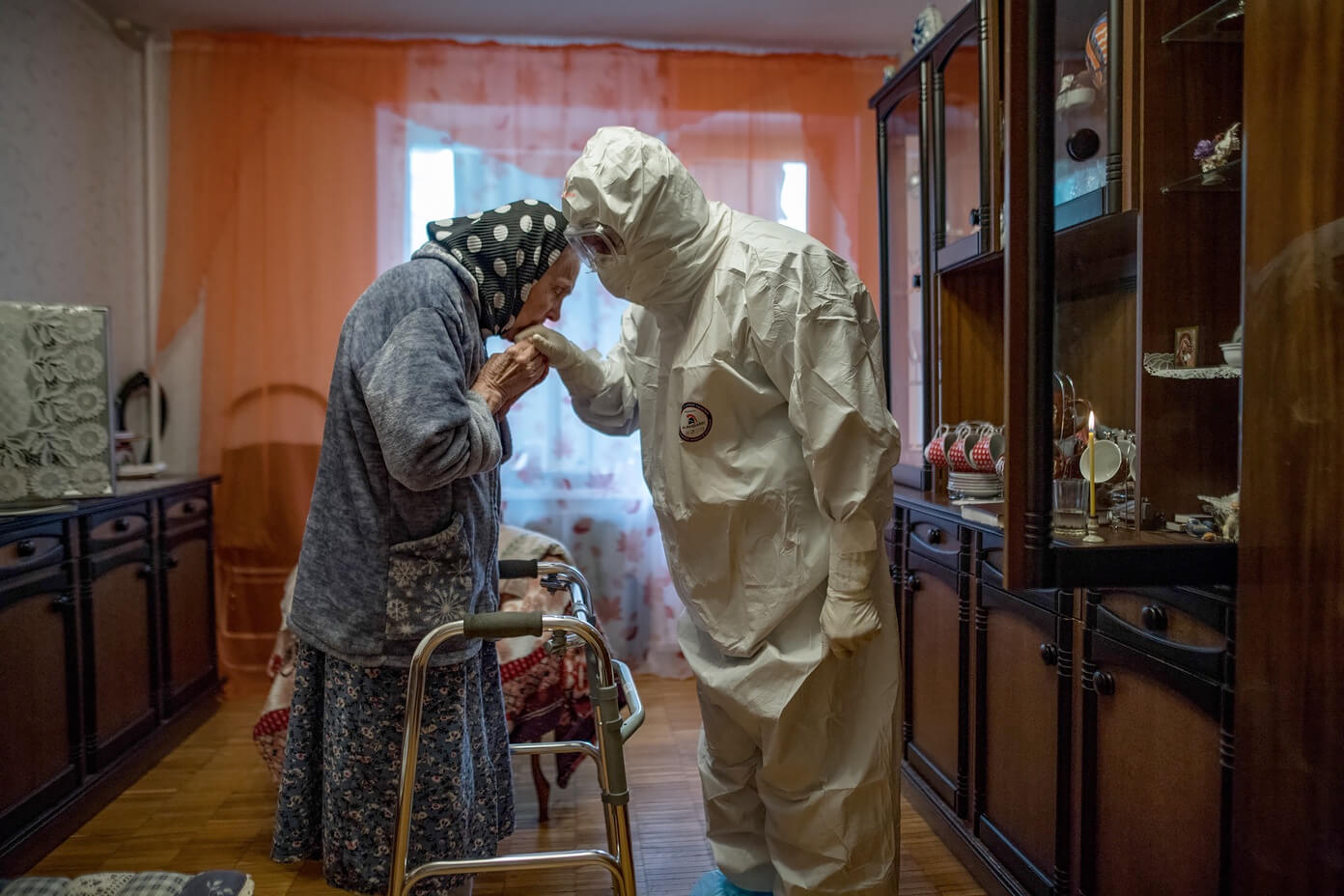 Adam Gray, a reporter from Britain's South West News Service (SWNS) has been chosen as the winner in the Photo Series category. The jury selected his series of pictures entitled In the Epicenter of COVID-19 as the best. 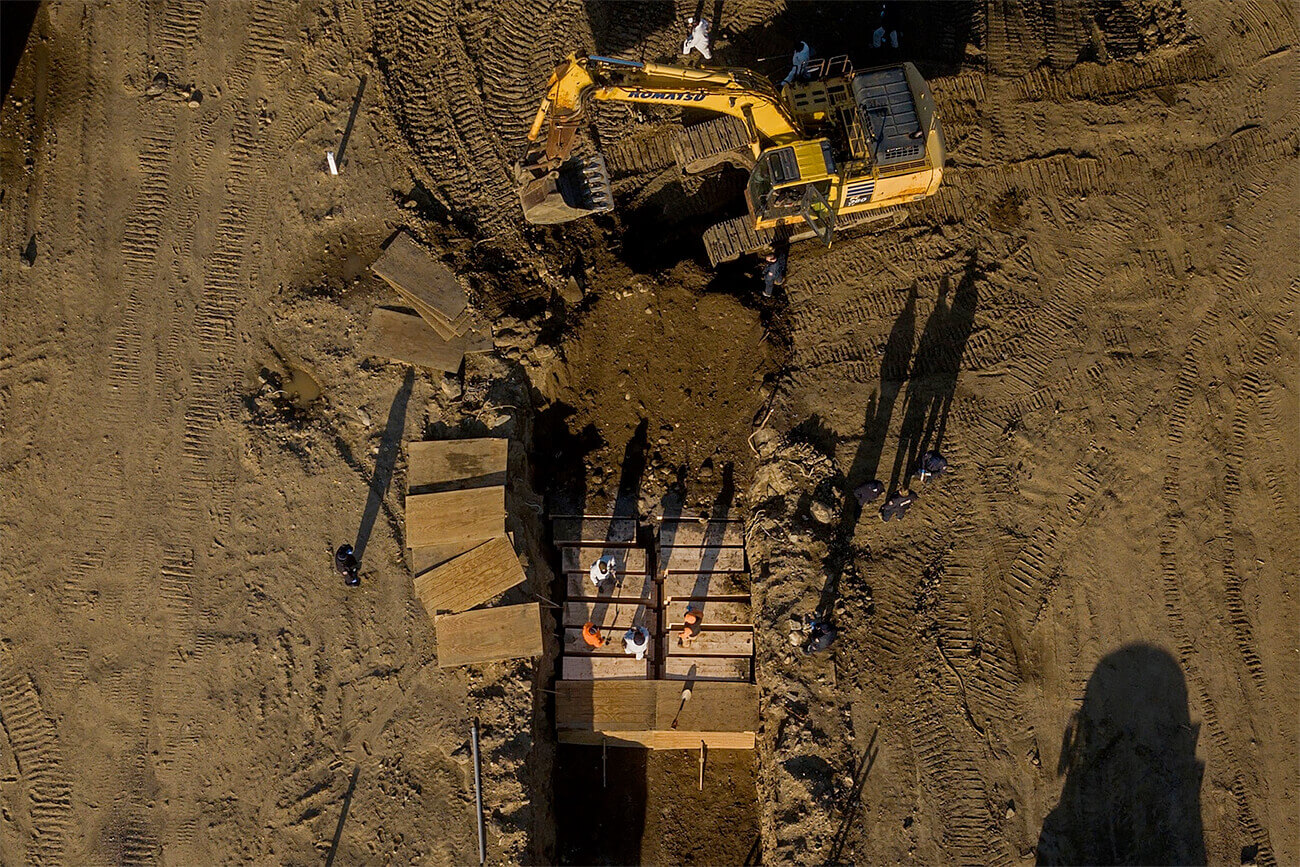 In the Epicenter of COVID-19 ©Adam Gray

The winners of these two categories received $3,000 each.

- Diego Ibarra Sánchez, a freelancer from Lebanon, for his work The Phoenician Collapse: COVID and CRISIS in LEBANON; 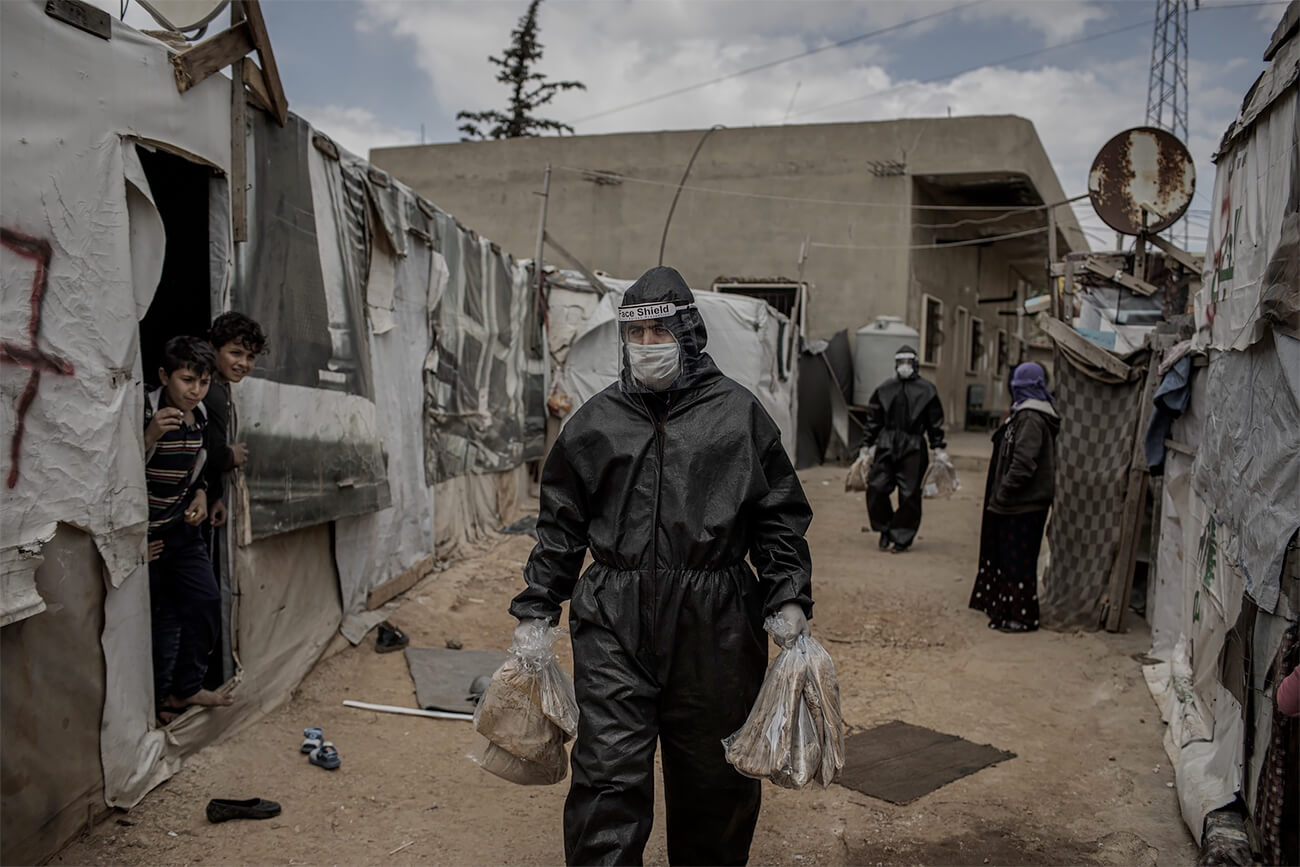 - Josh Edelson, a freelancer from the US, for his work Stay in the Circles; 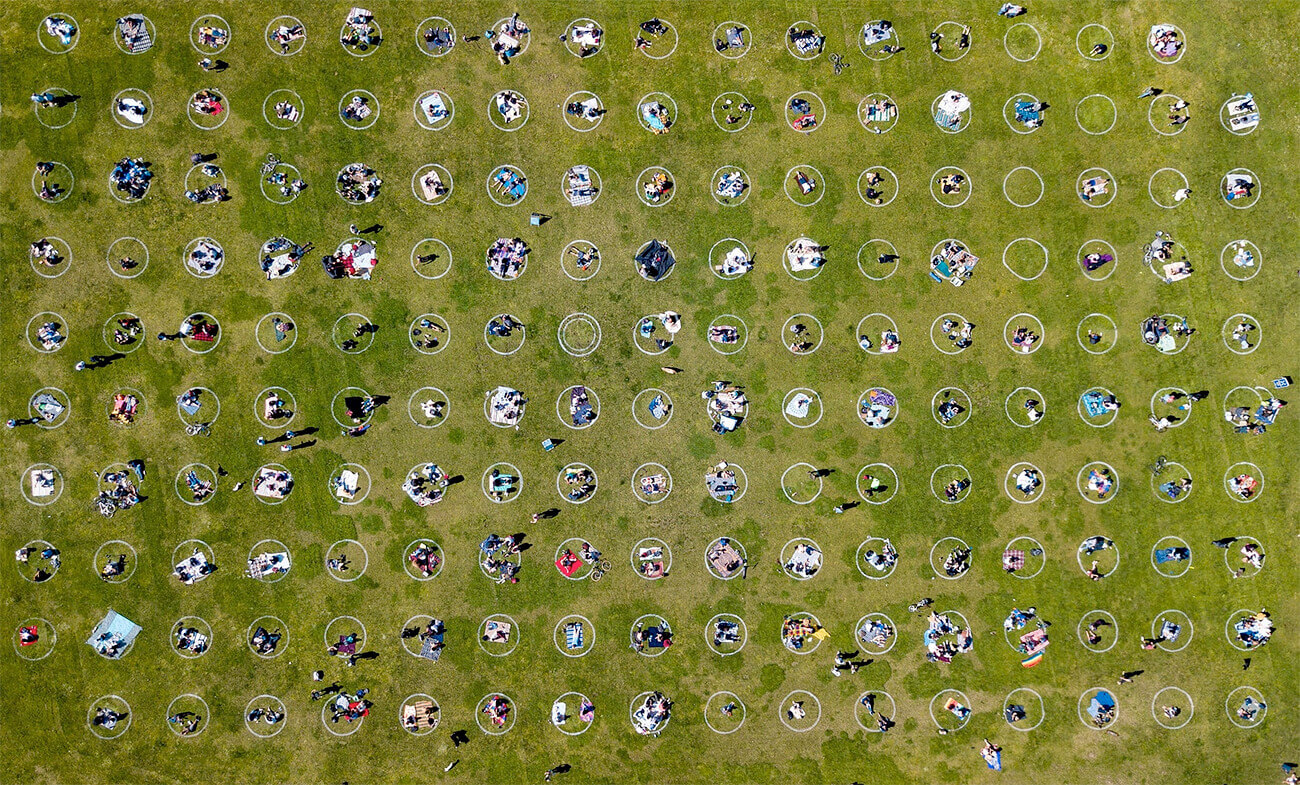 Stay in the Circles © Josh Edelson

- Ilya Pitalev, a photojournalist from the Rossiya Segodnya news agency (Sputnik) and his series of images dubbed The Confrontation; 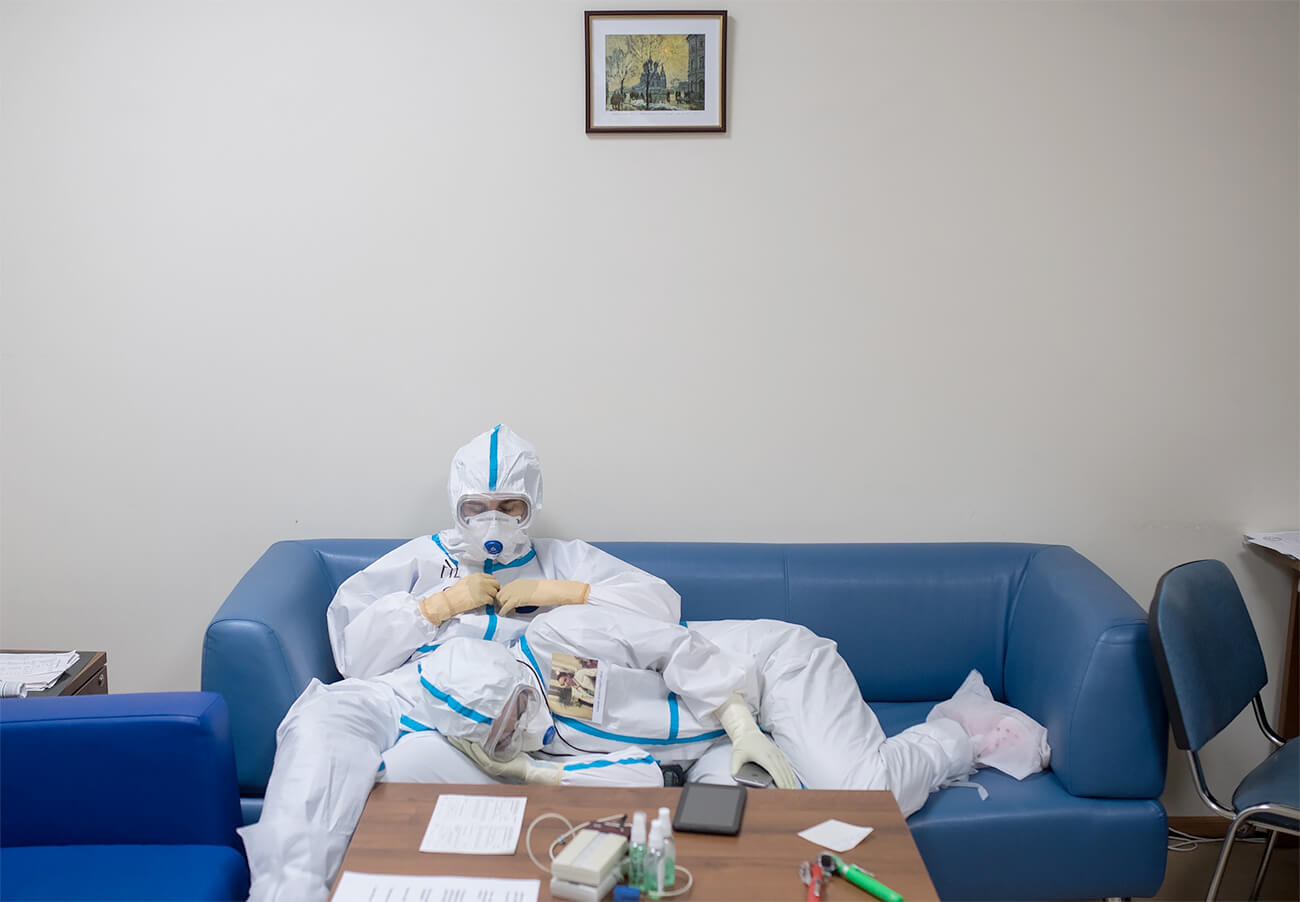 - Tao Liang, a photojournalist from Xinhua News Agency (China), for his work Kiss. 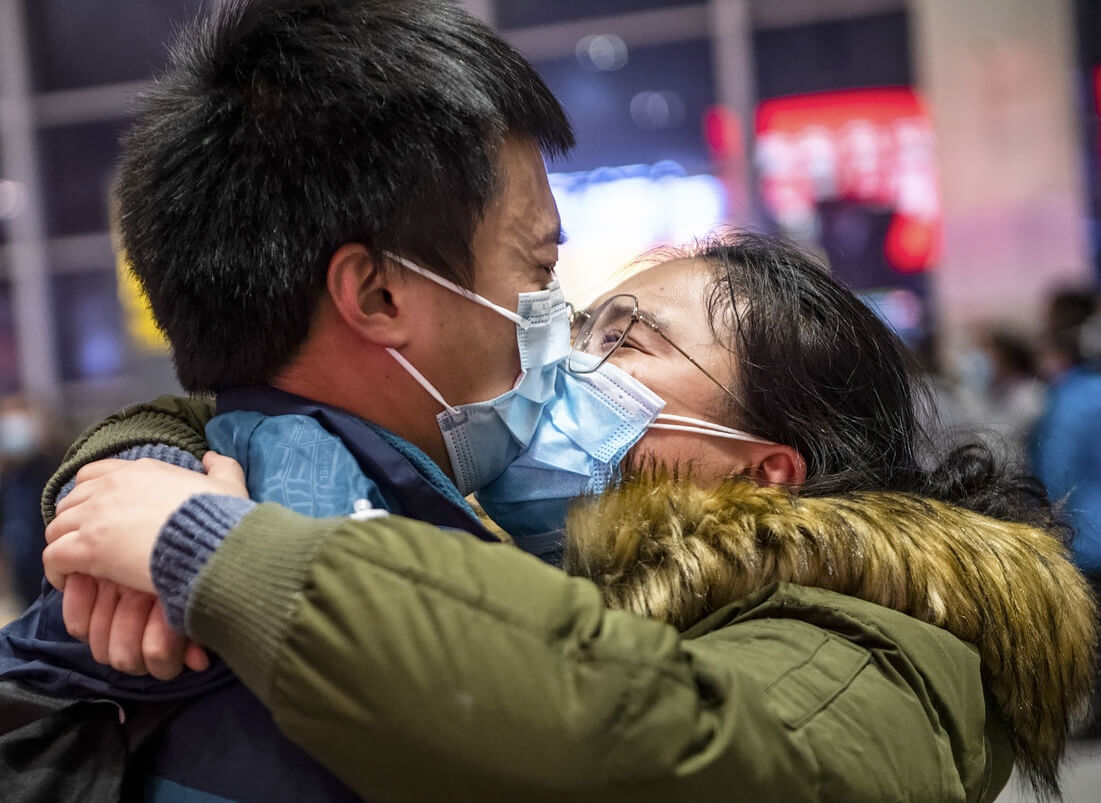 Among those who attended the ceremony that unveiled the News Photo Awards. Overcoming COVID contest's winners were: Dmitry Peskov, Deputy Chief of Staff of the Presidential Administration of Russia - Press Secretary for the President of Russia; Sergei Mikhailov, TASS Director General; Margarita Simonyan, Editor-in-Chief of the Rossiya Segodnya news agency (Sputnik) and the RT TV news network; Kirill Dmitriev, CEO of the Russian Direct Investment Fund (RDIF); Alexey Zaytsev, Deputy Director of the Information and Press Department of the Ministry of Foreign Affairs of the Russian Federation; Grigory Dukor, Head of the Photo and Video Department at TASS, along with the jury panel members representing the world's leading media outlets like the Associated Press, Reuters, AFP, Kyodo News, ANSA, PA Media, NOOR and others.

"I'm in a cloud right now and never forget this moment! I would like to thank all my colleagues and thank them for the opportunity to submit these works to the contest. And surely I would like to extend my gratitude to this wonderful lady who I had a chance to take a photo of during her birthday celebration", said the Grand Prize winner Brais Lorenzo Couto commenting the victory.

"This photo was taken last May during the quarantine period. I was looking for a topic to conduct a photo shoot on COVID and came across the information about a specially created division of priests who visit their congregants at home. I manage to contact one of them and this photo was taken precisely during a visit to the parishioner by father Ioann, the rector of the church at Botkin hospital. Thank you very much to the organizers! Such a solid jury panel means a lot to a photographer when his work is chosen as a winner - it motivates one to advance onward," Best Single Photo category winner Ilya Pitalev pointed out.

"I'm very proud of this award and would like to thank my colleagues who captured and documented the events related to pandemic depicting the work of all services. I think that with the advent of vaccines, the situation will change for the better," said Adam Gray, the Photo Series category winner.

"Press photographers along with doctors, were among the first to be at the forefront of the fight against the pandemic. And it was through their eyes that people around the world watched how this struggle unfolded and continues to unfold on the streets of deserted cities, in the "red zones" of hospitals, in laboratories where the vaccines are being produced. The work of photojournalists during the pandemic is a real professional feat. I am sure that 2020 will remain in mankind's memory for many decades to come thanks to the images that were presented at the News Photo Awards. Overcoming COVID contest as well. This contest turned out to be laudable, and we thought it will be a great idea to make it annual. We will think about the formats and themes and will announce them shortly," said TASS Director General Sergei Mikhailov.

Grigory Dukor, chairman of the contest's jury, head of the Photo and Video Department at TASS, in turn thanked the members of the international jury of the photo competition for their professional approach to the work. "I am glad that I was fortunate enough to work with a team of professionals representing the world's leading media - Associated Press, Reuters, AFP, Xinhua, Yonhap, Kyodo News, Anadolou, ANSA, PA Media, and NOOR," he said. According to him, "in many of the works, the authors sought to highlight hope, unity, and solidarity among people during these difficult times of the pandemic. The objective of documentary photojournalism is to present the story as it is, without any photoshopping or embellishments."

"For me, the criteria for selecting the best photos are actually very simple: outpouring emotion and excellent photographic language," said Lan Hongguang, a jury panel member, senior reporter and vice director of the Photo News Department at Xinhua News Agency. "I have seen these characteristics in many entries. However, when judging the contest's photos, there are two points which I think are particularly important, that is whether an image conveys positive values and whether it can provide precious spiritual value for the struggle between mankind and the disease. In the face of this great calamity, we share a common destiny. And as far as I'm concerned, those images that can give people hope and strength are more important than those that highlight human despair and demonstrate our common vulnerability. Photos should remain the best memory of our common struggle that's my most important standard."

"The Russian Direct Investment Fund welcomes TASS News Agency's initiative to organize the ‘News Photo Awards. Overcoming COVID' contest", said Kirill Dmitriev, CEO of the Russian Direct Investment Fund (RDIF) - the partner of the TASS contest. "A picture, as they say, is worth a thousand words when it comes to capturing the dramatic moments of humanity's battle against the pandemic. I am convinced that every photo presented at the contest will go down in history. Today, with the help of mass vaccinations, including Russia's Sputnik V vaccine which has proven to be one of the most effective in the world and based on a platform with decades of success, this battle is entering the final stages. This is why we have offered the winners of the contest as well as our followers across social media to take pictures of mass Sputnik V vaccinations around the world. We hope that these photographs will symbolize the final victory in the fight against the pandemic."

The global photo contest for professional press photographers, News Photo Awards. Overcoming COVID, kicked off on October 5, 2020. It was devoted to overcoming the coronavirus pandemic and focused on lauding the significance of the work of photojournalists who demonstrated outstanding heroism during the COVID-19 outbreak. About 4,000 photos were sent to the contest by press photographers from 84 countries. China, India, Malaysia, Iran, Russia, Italy, Turkey, and the US occupied the leading positions in terms of the number of submitted applications.

The News Photo Awards. Overcoming COVID photo contest is sponsored by the Russian Direct Investment Fund, the sovereign wealth fund of Russia, which has been assigned by the Russian President to finance the production of the Sputnik V vaccine and oversee its global marketing.

About TASS
Founded in 1904, TASS is the largest Russian news agency and one of the biggest news agencies worldwide.
TASS subscribers, including Russian and foreign media, federal and regional government bodies, have access to a wide range of 60 news feeds and topic-oriented services both in Russian and English.
TASS publishes about 1,500 news items and more than 500 photographs and videos from correspondents in Russia and across the world daily, forming a complete and objective picture of events. Sixty-three offices in 60 countries, regional centers and correspondent offices in Russia ensure the agency's operation, enabling TASS to quickly receive information from any corner of the globe.
TASS Photo Bank has the largest collection of news snapshots among CIS news services, containing more than 28 million images, works by TASS correspondents, partners and the agency's archive materials since the beginning of the 20th century.
The TASS information database stores more than 10 million documents.
Users of mobile devices have access to two applications - TASS Now and TASS Calendar.
Special projects and infographics of TASS have been repeatedly received national and international professional awards.
Regional information centers of the agency are located in Moscow, St. Petersburg, Novosibirsk, and Yekaterinburg. TASS annually holds more than 1,000 events in various formats at its own venues and within the framework of major forums in Russia and abroad.
TASS is a member of global and regional media organizations, it maintains partnerships with more than 60 news agencies around the world.
Almost 2,000 employees worldwide ensure the agency's operation in real time.