The itinerary of a hijacked photograph 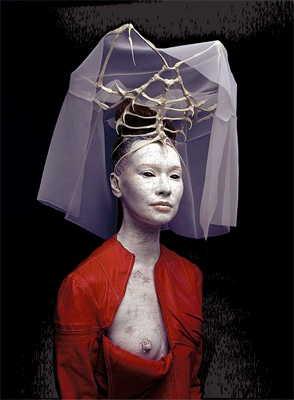 There was once a photograph which toured the world.

Under the process of globalization, this photograph was not only changed but was also given a different author, establishing an emblematic case for the defense of artistic rights (badly respected in our internet age).

This story begins with the Musée des Arts Décoratifs (Decorative Arts Museum), attendant to the Louvre Museum, in Paris, and with the exhibition staged by this Museum: Dans la ligne de mire (On sight septembre 2013 / march 2014); it continues with counterfeiting on an American web-site.

In 1998, photographer Benjamin de Diesbach creates three portraits, a man, a woman and a child, inspired by Flemish painting from the 15 century. Patrick Veillet lends an accessory visible in each of the portraits, Sébastien Meunier creates the clothes.

In September 2013, Benjamin de Diesbach gets a message from Patrick Veillet informing him of an exhibition staged by the Musée des Arts Décoratifs, in which his work and that of other jewelry and accessory designers will be shown.

Benjamin de Diesbach discovers also that his three portraits have been changed, their pupils having been blackened over.

The catalog of the exhibition (price: 39 euros) show two of the portraits, full page, with the name of Patrick Veillet as the photographer. The photo credits, given at the end of the catalog, indicate that P. Veillet is the photographer who created the three portraits.

From May to September 2013 Benjamin de Diesbach was never contacted by the Musée des Arts Décoratifs, by the exhibition's curator, Frederic Bodet, nor by the person responsible for the catalog.

Various organs of the media reported on the exhibition. For example the French daily, Les Echos, on whose web-site one can find (section: Lifestyle) a reproduction of one of Benjamin's portraits, attributed to Patrick Veillet.

One week after the exhibition's opening, Benjamin de Diesbach discovers by chance an American web-site Society6, which sells on-line products knocked out from art works. He observes that one of his 3 portraits (the ones shown at the Arts Décoratifs exhibition)can be seen on portable phone shells, tee-shirts, cushions ... etc. Big numbers cover his work. The products are signed: Patrick Veillet.

Research enables also Benjamin de Diesbach to discover another web-site, Lookinart. With 500.000 visits per month this web site enables artists to promote their work (which is the case for example by the well-known photographer Laurent Seroussi). Under the section Patrick Veillet, one finds Benjamin de Diesbach's three portraits, with the caption: Photographer and Designer Patrick Veillet.

One must insist on the fact that misappropriation of works of art can lead to the charge of counterfeiting. Photographers must be wary when diffusing their products
Stay up-to-date  with call for entries, deadlines and other news about exhibitions, galleries, publications, & special events.
Advertisement