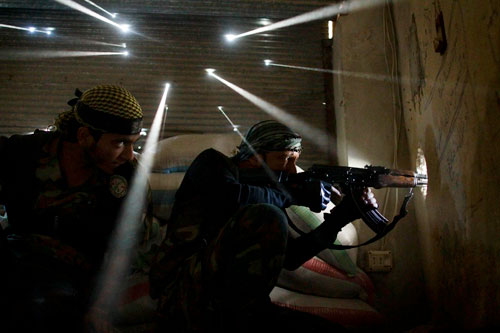 The 2013 Pulitzer Prize in the Feature Photography category was awarded to Javier Manzano, a free-lance photographer, for his extraordinary picture, distributed by Agence France-Presse, of two Syrian rebel soldiers tensely guarding their position as beams of light stream through bullet holes in a nearby metal wall.

Javier Manzano is a photojournalist and filmmaker based in Istanbul, Turkey. Born in Mexico, Manzano left for the United States at the age of eighteen. To a large extent, his work has focused on the many cross-border issues that bind these two nations together - as estranged neighbors, vital partners and at times feeble associates. His career started in the newspaper industry as a photo- and videojournalist, and later expanded into television and electronic media. The Rocky Mountain News, Manzano's last employer, closed its doors in February of 2009. Since then, Javier has worked as a freelance photographer covering the wars in Mexico, Afghanistan and Syria.

All about Javier Manzano