All About Photo Presents 'Felicific Calculus: Technology as a Social Marker of Class, Race, & Economics in Rochester, NY' by Eric Kunsman 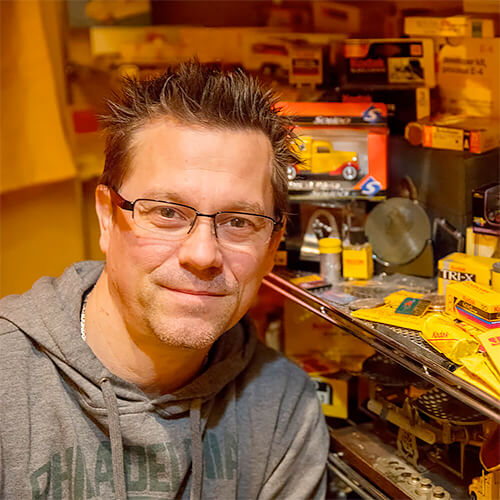 In the later 18th century, as the U.S. and French Revolutions captured the attention of Europe, reformer and Utilitarian philosopher Jeremy Bentham (1748–1832) proposed an algorithm to help determine the moral rightness of an action by balancing the probable pleasures and pains that it would produce.

Bentham recognized that neither individuals nor society could strictly follow the calculation he described, but he believed it could serve as a model of an ideal calculation – that the closer the decision-making involved in determining a policy or choice adhered to the calculation, the closer the resulting choice would be to an exact determination. In the 1940s, social reformers revisited Bentham's algorithm, naming it the Felicific Calculus.

Payphones?
In 2017, when I decided to relocate my studio to a different part of Rochester, NY, colleagues immediately questioned my choice of locations, making comments along the lines of: “...that area's a war zone.” My experience with my new neighborhood had been consistently positive, so I wondered what gave them the impression that this neighborhood was especially dangerous.

People seemed to focus on how the neighborhood looked when they tried to describe what gave them the impression that the location was particularly dangerous. Several visual cues were mentioned: abandoned buildings, garbage, people loitering. But one factor mentioned by a number of people caught me by surprise. They were disturbed by the number of payphones that still remained in this neighborhood, inferring that only criminals use payphones these days.

It turns out there were an unusually high number of payphones in the new neighborhood. Curious, I began photographing and testing them. The vast majority of these public payphones were working. And I soon learned that far from being used by criminals, these phones were providing a lifeline for some of the poorest residents in the area.

The reactions of my colleagues drove me to start educating myself. I wanted to know what led these individuals to form these perceived ideas of a location they never visited. I photographed payphones and began mapping their locations, then overlaid them with census maps showing economic status, ethnicity, age and sex, and the city's crime map. What became immediately apparent was the direct correlation between poverty level and the location of the payphones. Areas with the most payphones coincided with Rochester neighborhoods where the average family incomes are lower than $20,000 annually. A December, 2013 article in Rochester's Democrat & Chronicle investigated the decline of the city's payphones and reported how they serve as a lifeline for many individuals in these poorer communities. The 3,055 payphones in the Rochester area are being used on average once every four days. And although the crime maps show small pockets of crime in the poorest neighborhoods, there was no direct correlation between location of payphones and incidents of crime.

I learned that the working payphones in the Greater Rochester communities reflected an unusually altruistic felicific calculus on the part of Frontier Communications, the local telecommunications provider. Instead of focusing on profits the company chose to leave and maintain the payphones in the areas where they are most heavily needed. This choice by Frontier is not the typical profit-driven decision usually seen in corporate America (with an average payphone use of once every four days, there's clearly no profit center for the corporation) but it is one of community service.

Bigger Picture
Change in technology has accelerated rapidly in recent years, and in many areas, it has outpaced the ability of policy makers to make those advances equally available to socially and economically vulnerable citizens. There also appear to be unconscious biases that come into play, judgements that are formed about people who aren't able to access contemporary technologies in their daily lives, and who continue to depend on technologies and systems that just a decade or so ago were accepted as “normal.” Those unacknowledged biases, those judgements that are made without basis in fact, can unfortunately lead to ignorant assumptions that incorrectly mislabel a neighborhood or community; or may even lead to dangerous situations when employed by policy makers.

I've found that payphones are a case in point. In Detroit, Michigan, for example, politicians decided to have all public payphones removed without studying or surveying their actual use. They simply assumed the criminal connection. This decision was based on a further assumption that everyone today must own a mobile phone. Decision-makers lacking facts or any real understanding of issues facing citizens from a different economic class just acted on a misperception.

Through Felicific Calculus I hope to challenge negative perceptions of these social markers that lead people to conflate poverty with crime. I hope the juxtaposition of the images and the mapping overlays may engage viewers in examining their own gut perceptions of social markers, like payphones and payphone use, and to explore the gaps between their prejudgments and the reality of how those phones actually serve individuals who may be less privileged. Though they are relics to most of us, payphones remain important for residents trapped in lower economic circumstances. 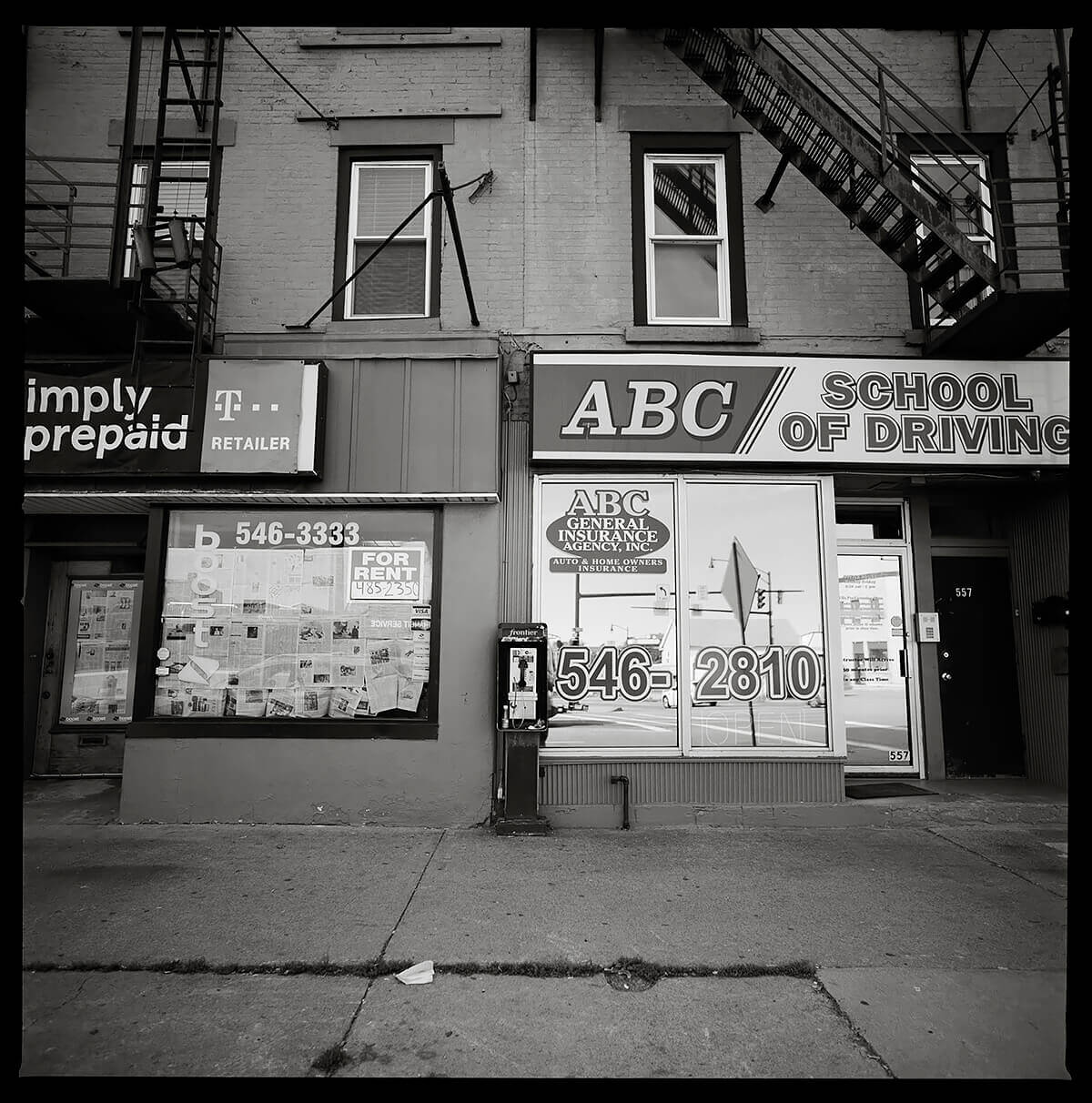 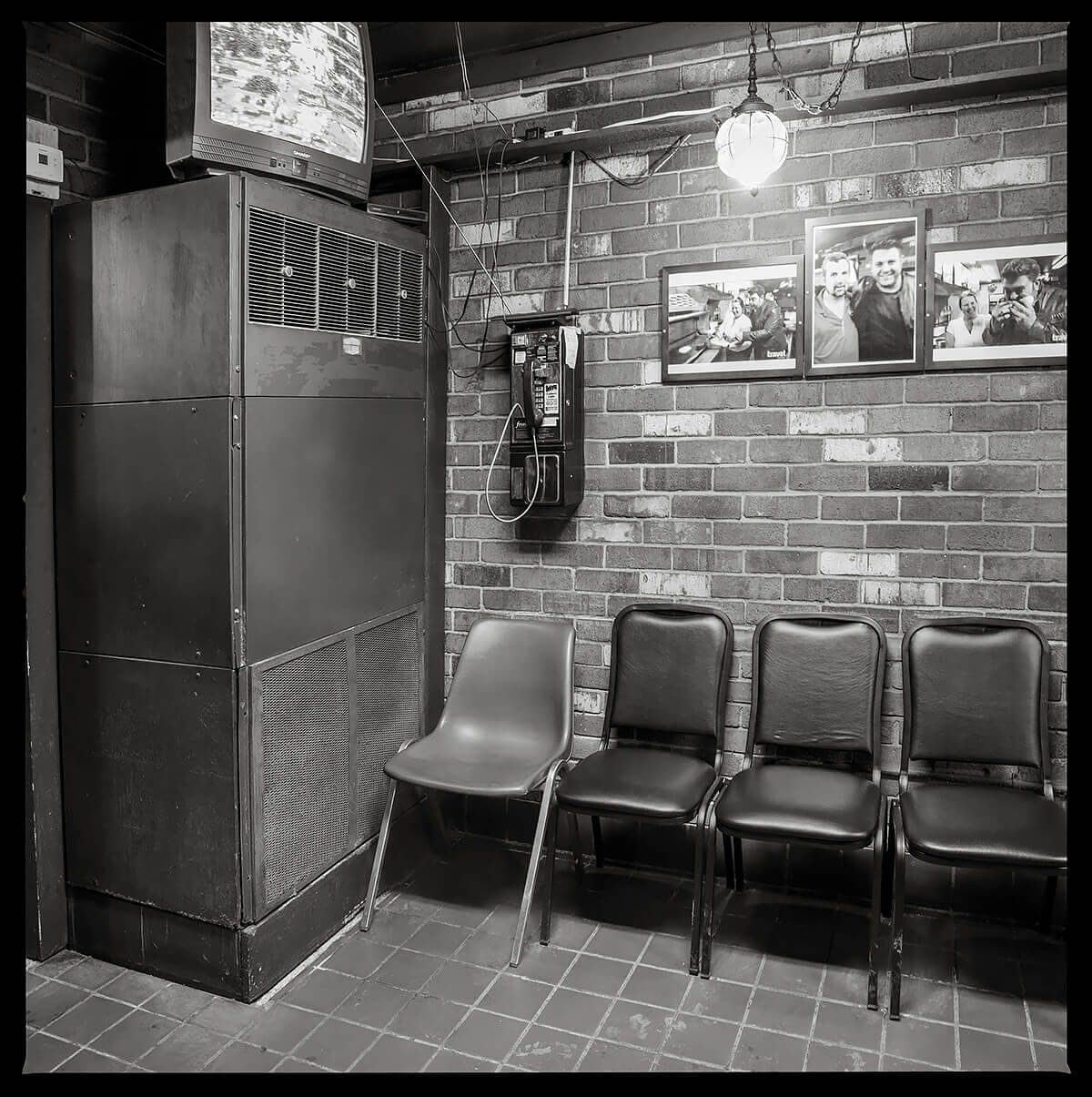 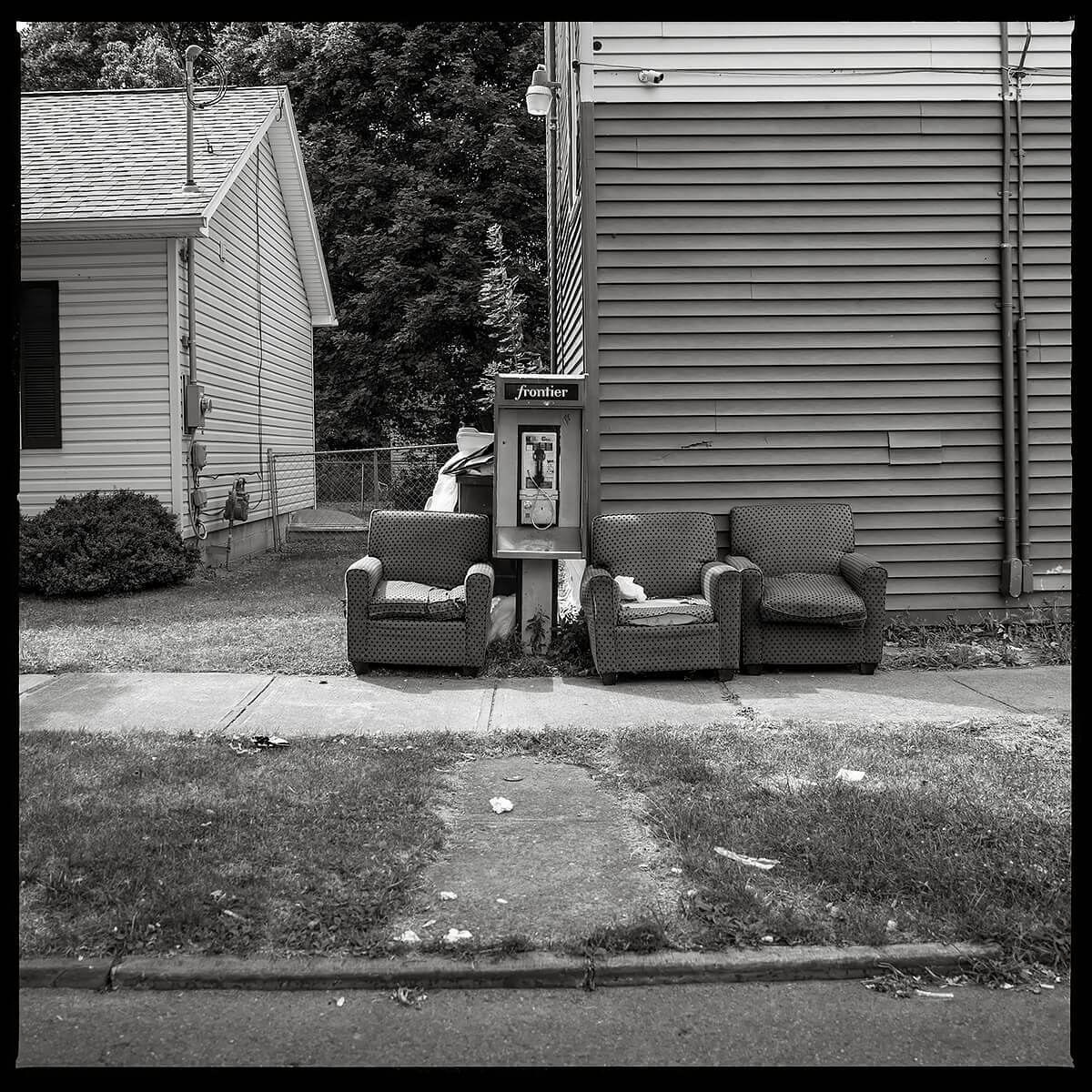 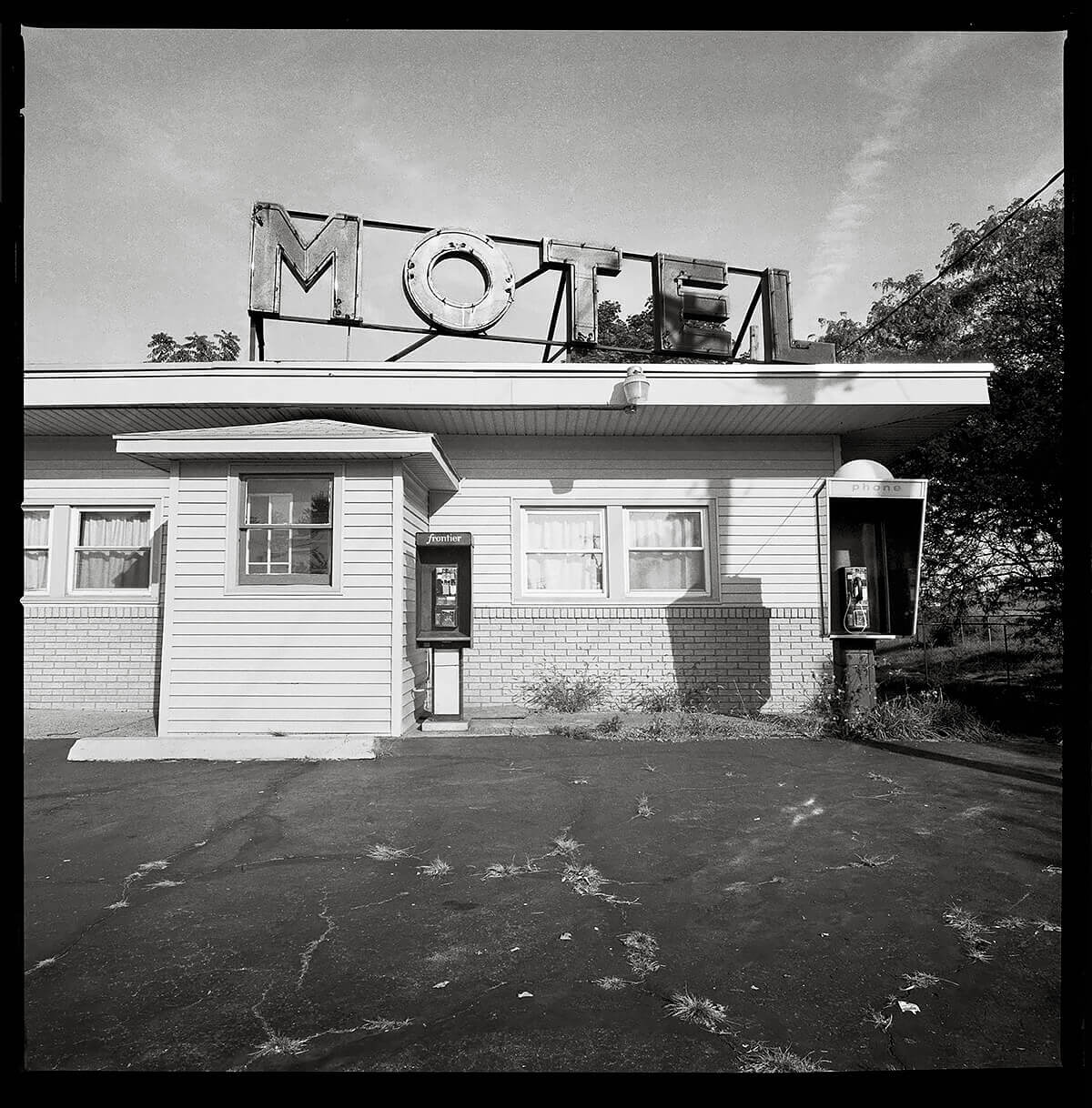 Eric Kunsman
Eric T. Kunsman (b. 1975) was born and raised in Bethlehem, Pennsylvania. While in high school, he was heavily influenced by the death of the steel industry and its place in American history. The exposure to the work of Walker Evans during this time hooked Eric onto photography. Eric had the privilege to study under Lou Draper, who became Eric's most formative mentor. He credits Lou with influencing his approach as an educator, photographer, and contributing human being.

Eric holds his MFA in Book Arts/Printmaking from The University of the Arts in Philadelphia and holds an MS in Electronic Publishing/Graphic Arts Media, BS in Biomedical Photography, BFA in Fine Art photography, all from the Rochester Institute of Technology in Rochester, New York.

Currently, he is a photographer and book artist based out of Rochester, New York. Eric works at the Rochester Institute of Technology (RIT) as an Assistant Professor in the Visual Communications Studies Department at the National Technical Institute for the Deaf and is an adjunct professor for the School of Photographic Arts & Sciences.

In addition to lectures, he provides workshops on topics including his artistic practice, digital printing, and digital workflow processes. He also provides industry seminars for the highly regarded Printing Applications Lab at RIT. His photographs and books are exhibited internationally and are in several collections. He currently owns Booksmart Studio, which is a fine art digital printing studio specializing in numerous techniques and services for photographers and book artists on a collaborative basis.

Eric's work has been exhibited in over 40 solo exhibitions at such venues as CEPA Gallery, Nicolaysen Art Museum, Rhode Island Center for Photography, Hoyt Institute of Fine Art, Los Angeles Center for Digital Art, and numerous university galleries. His work has also been a part of over 200 group exhibitions over the past five years, including exhibitions at the Center for Photography, A. Smith Gallery, SPIVA, San Luis Obispo Museum of Art, Spartanburg Museum of Art, Atlanta Photography Group, Site: Brooklyn, Colorado Photographic Arts Center, Philadelphia Photo Arts Center, and many more.

There's no ''given,'' formula for what demands Eric's focus as a photographer. Eric is as drawn to the landscapes and neglected towns of the American southwest as he is to the tensions of struggling rustbelt cities in the U.S. northeast. Eric is attracted to objects left behind, especially those that hint at a unique human narrative, a story waiting to be told. Eric's current work explores one of those relics: working payphones hidden in plain sight throughout the neighborhood near his studio in Rochester, NY. Associates suggested they signified a high crime area. This project's shown Eric something very different. 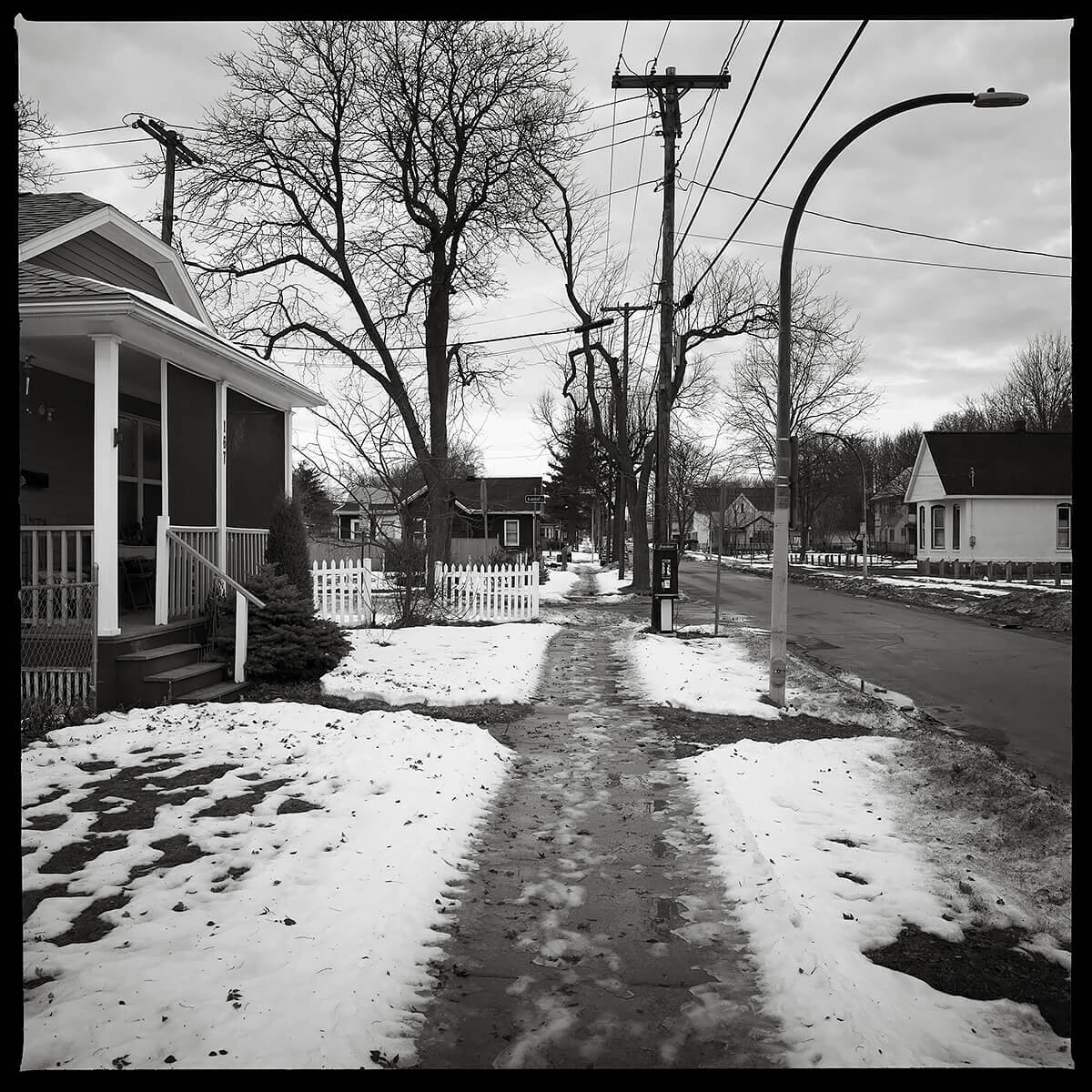 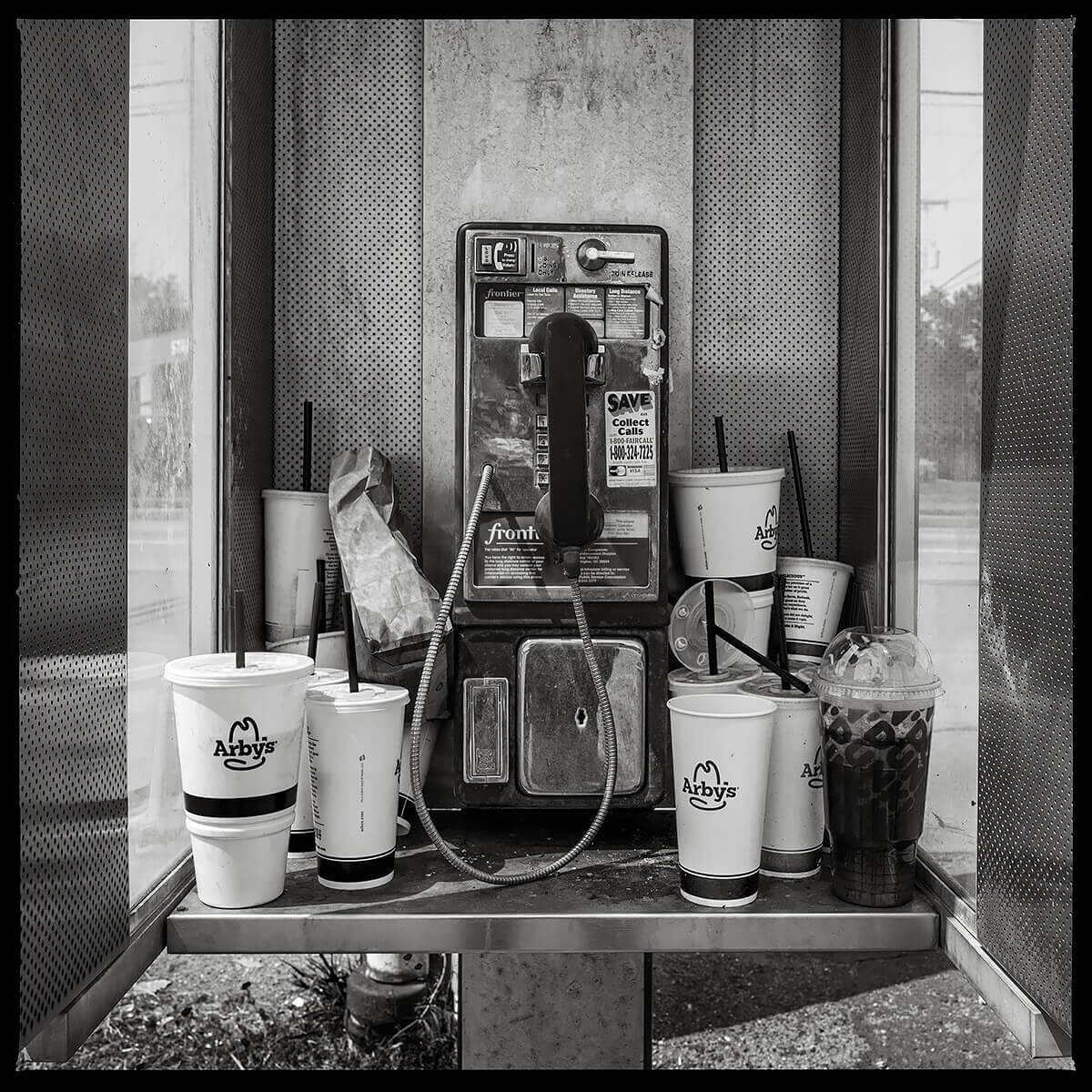 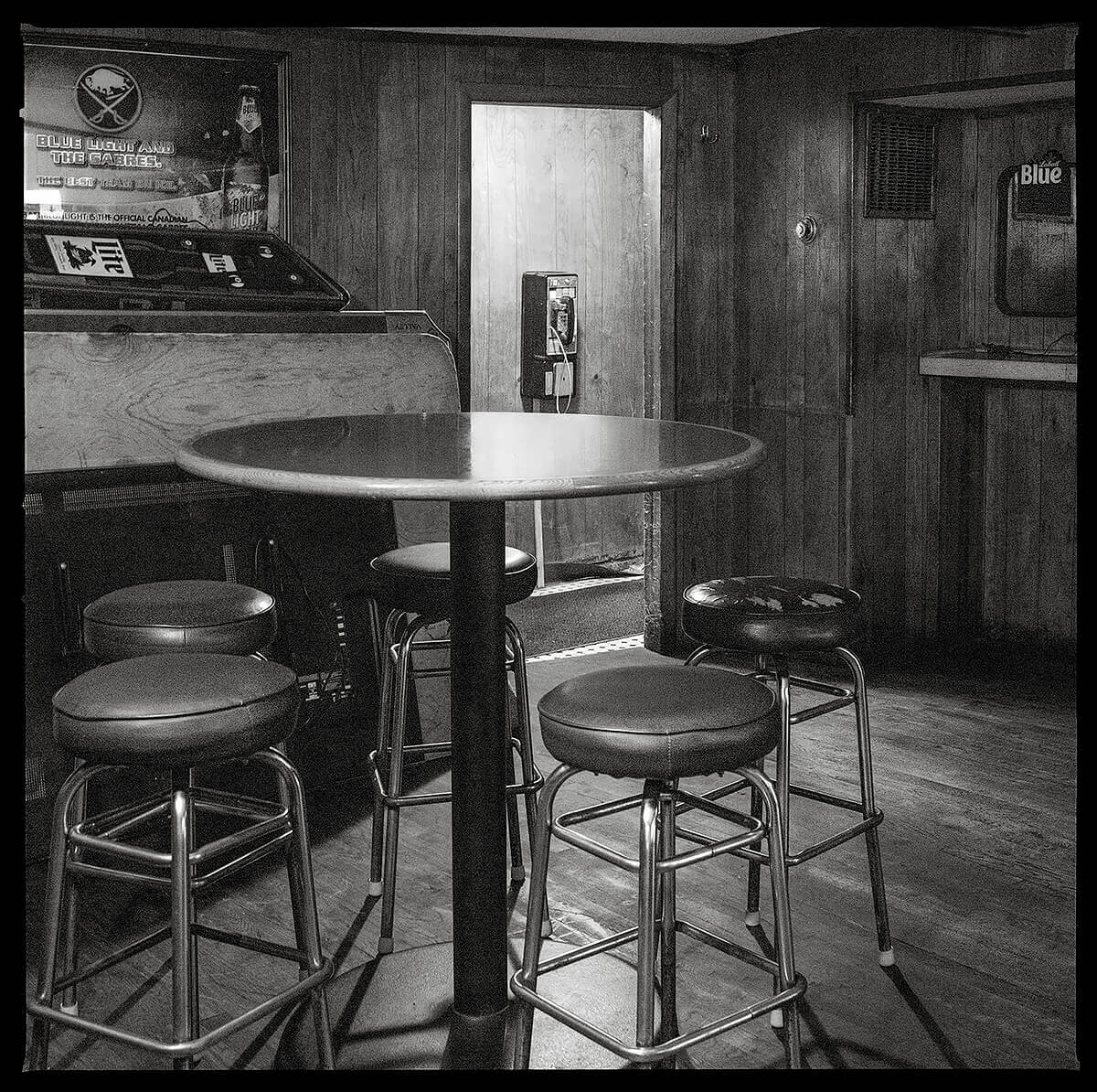