Supreme? Or Sinister? The perfect in photography and its subjects. 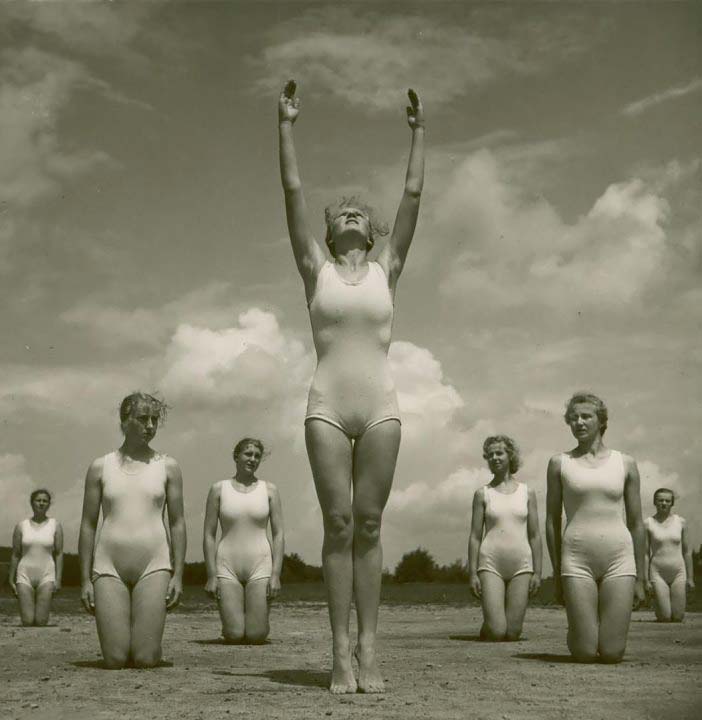 It is not hard to admire the idealising designs of Rudolf Koppitz, born 3 January in 1884, but something sinister lurks in his less well known relationship with his wife Anna and the work they did together. What does this history reveal about our current obsession with the digital tools that help us perfect our pictures; are we photographers or painters?

His most famous is Movement Study in which a willowy, naked Russian ballerina bends impossibly at full-stretch in front of a black background conformed to her silhouette by the languid embrace of a trio that moves to a sapphic metre, like that of Swinburne's poem of that name;

So the goddess fled from her place, with awful
Sound of feet and thunder of wings around her;
While behind a clamour of singing women
Severed the twilight.

...which though written 28 years before, might be a description of the photograph and its 'sound of feet', a cinematic reiteration that reels forward its motion. Koppitz, then a committed pictorialist reproduced it in this orientation, and sometimes flipped to read left-to-right, in virtuoso gum bichromate, bromoil and silver gelatin prints. 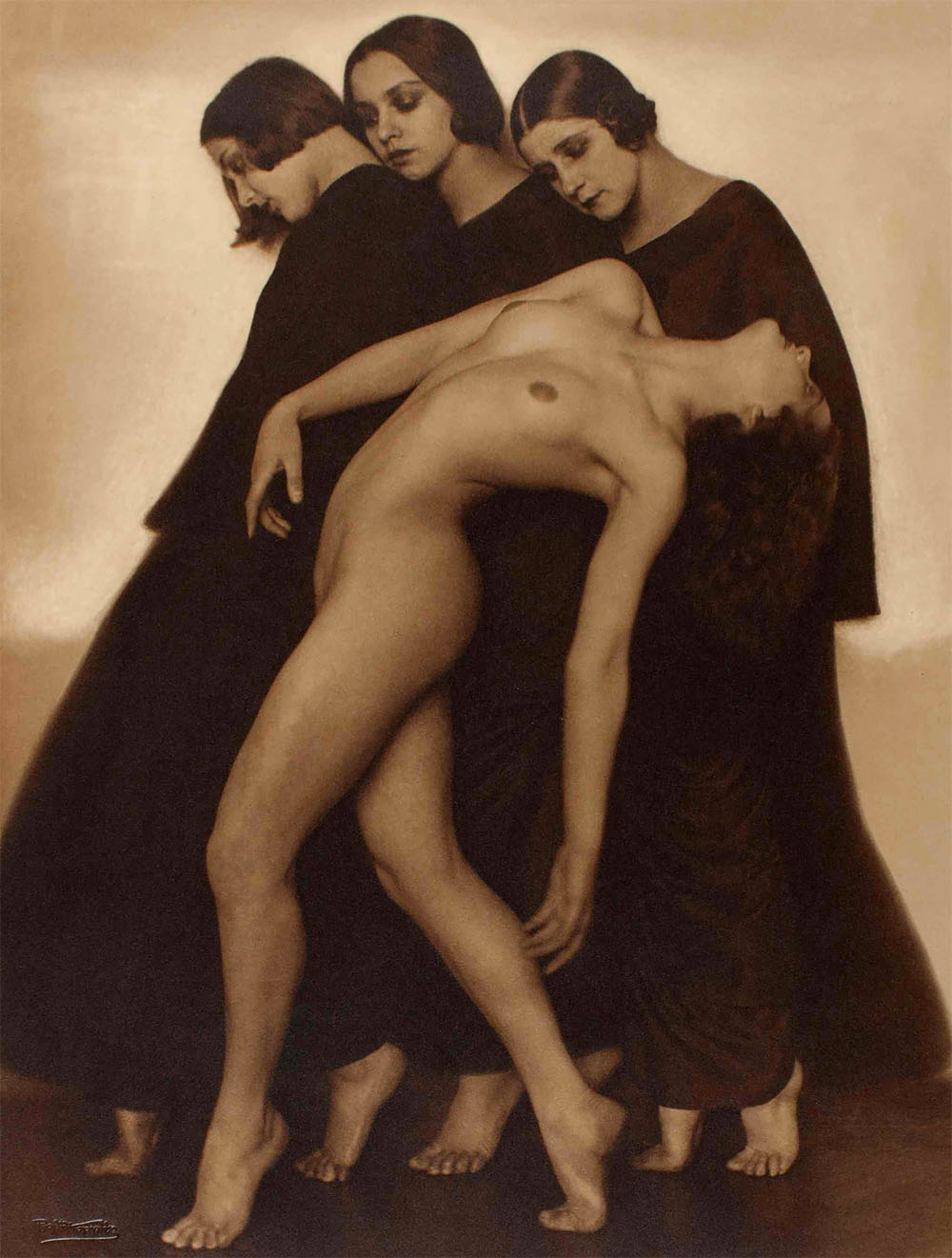 It also carries forward the aesthetics of the Vienna Secession, the Austrian Art Nouveau though, in its bold graphic forms, pyramidal composition and shallow relief geometry, can be read the proto-Art Deco of the Wiener Werkst tte or of Gustav Klimt. In fact the image is conservative if regarded in the context of Neue Sachlichkeit anti-expressionist objectivity then predominant in photography of Central Europe.

Koppitz was born in the hamlet Schreiberseifen in Poland, which after he had been an aerial photographer for Austria during WW1, became part of the far eastern part of the newly created Czechoslovakia. He moved to Vienna. 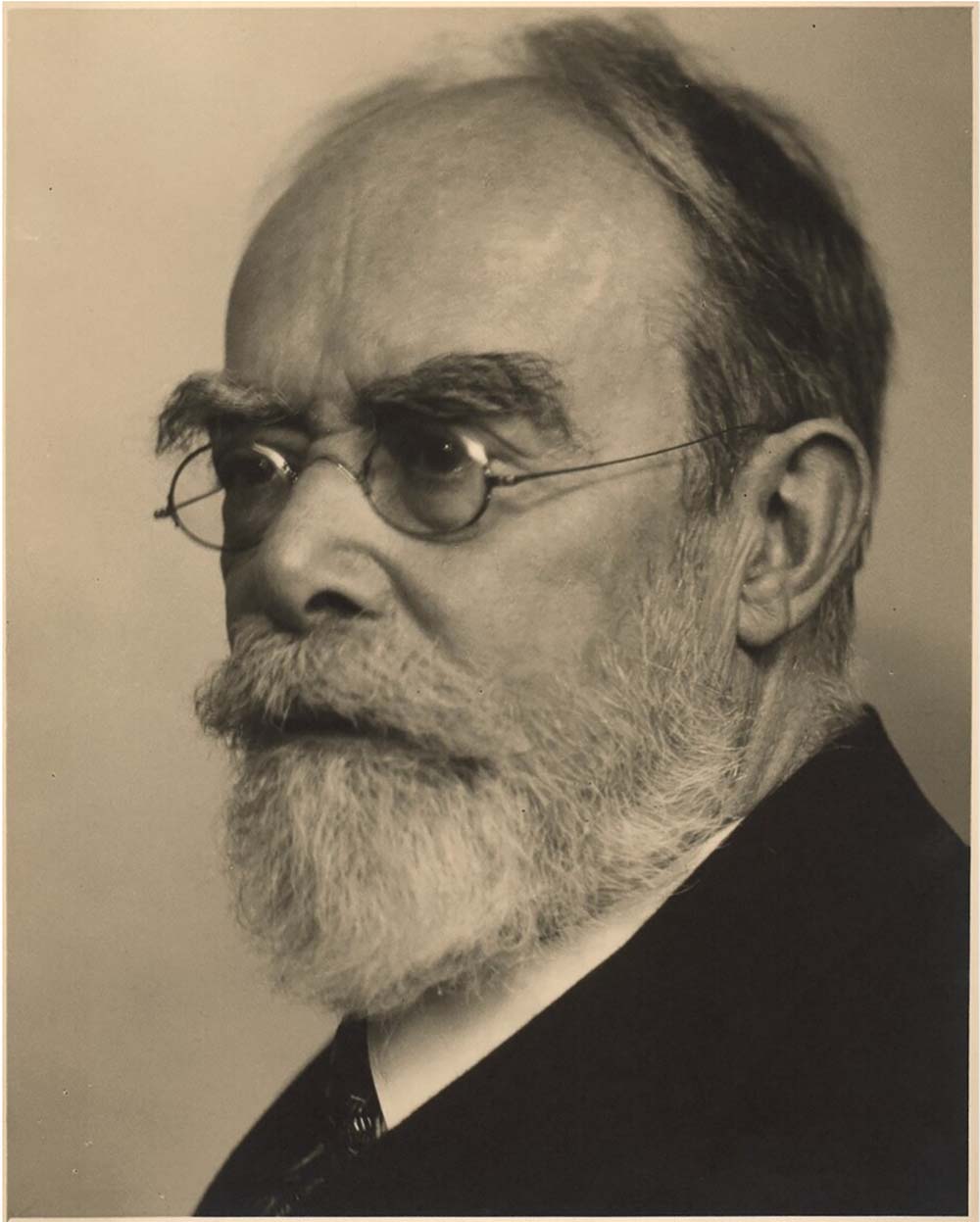 The retouching of Koppitz' prints was carried out by his wife Anna (1895 - 1989), also a photographer, whom he met when both had been assistants at the Graphische Lehr und Versuchsanstalt in Vienna, founded by specialist in photographic chemistry Josef Maria Eder (1855-1944) whose portrait Koppitz made, as Nadar had done in 1887. Koppitz in 1919 became professor there for 20 years and in addition gave private courses in the small studio next to his apartment. In 1923, a year before he made his famous Bewegungsstudie, he and Anna married and had one daughter, Lisalotte. 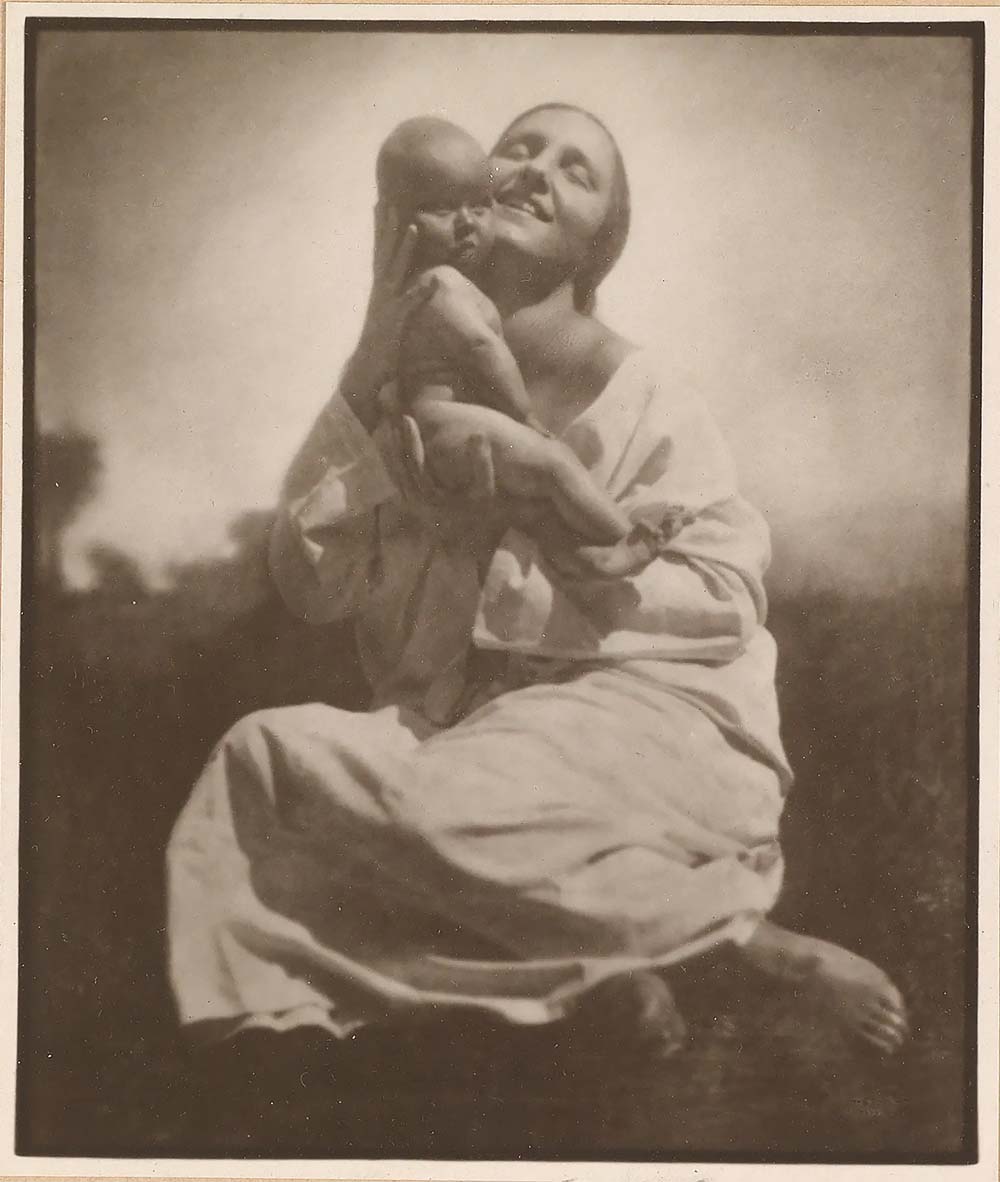 The ecstatic, idealising madonna and child is a classic of Kunstphotographie (as Pictorialism was called in Austria) as Julia Secklehner asserts. That apotheosis is evidently the motivation for Bewegungsstudie too, and in the nature-worship of Koppitz' self-portrait nude In the Arms of Nature, most likely a collaborative effort by the couple, which Secklehner identifies as part of the Köperkult ('cult of the body') and the naturist heimat sentiment in its alpine setting which it shares with another low-angle 'self-portrait,' with his cameras, and the heroic Mountaineer of about 1930. 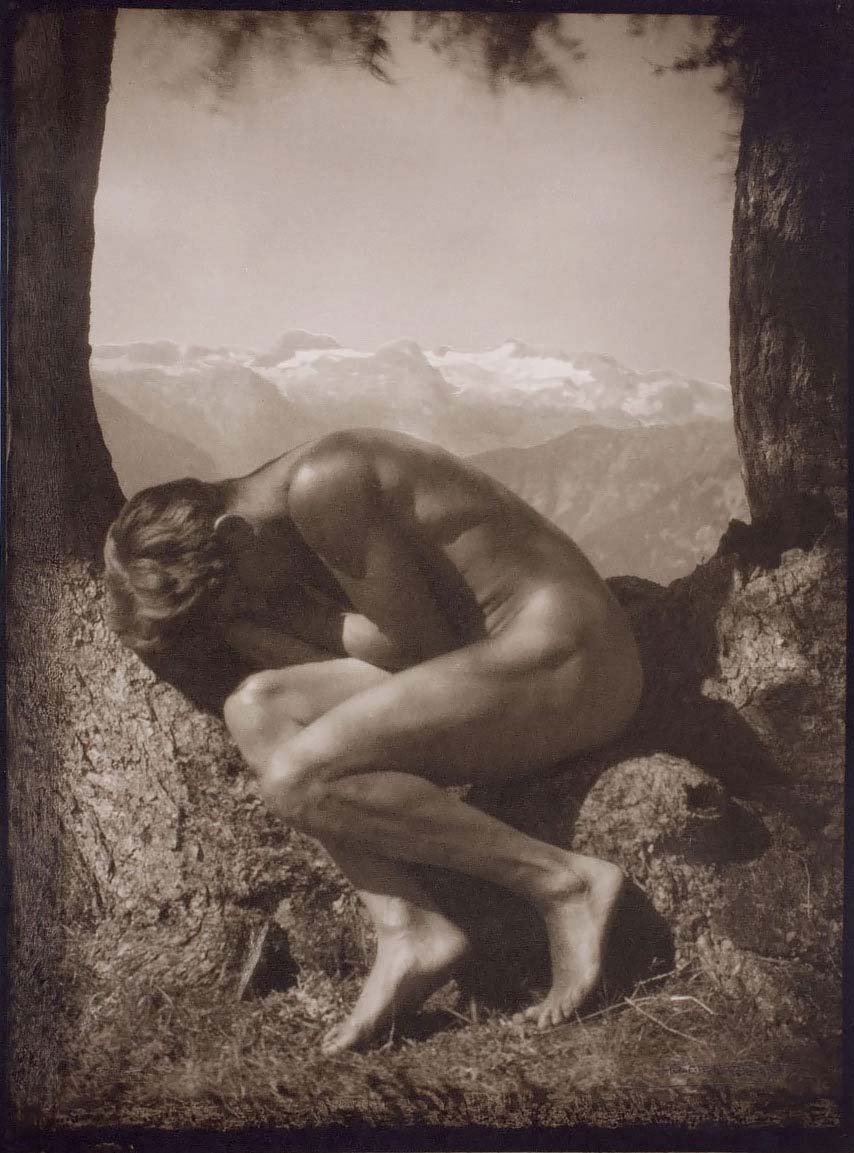 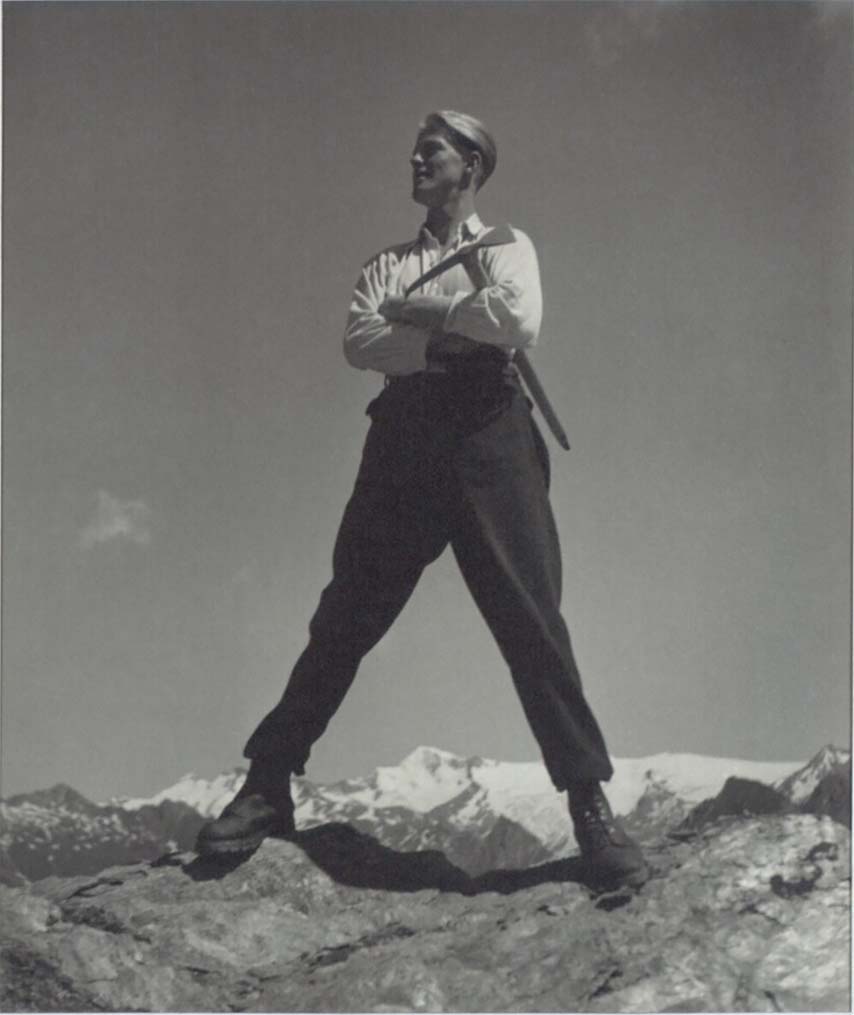 Mountaineer is amongst a large series of Völkisch imagery to which the couple devoted themselves in the 1930s; ethnographic records of the peasant archetype, eulogised as the archaic essence of Germanic peoples, at first mystical and quasi-theosophical, but progressively more chauvinist and nationalistic under the Austrian chancellor dictatorship initiated by Engelbert Dollfuss in 1933. 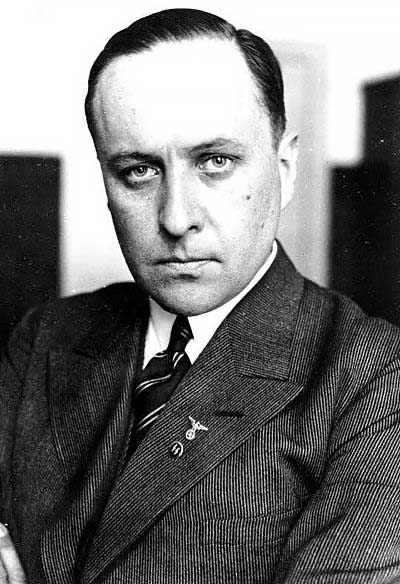 Rudolf died in 1936, when Adolf Hitler remilitarised western German lands near the Rhine River and the eastern border of France, a provocation that defied the terms of the Versailles Treaty, which had prohibited Germany from keeping troops in that territory. His death may have saved his considerable reputation as a highly regarded art photographer; whether he favoured Hitler has not been discovered. However völkisch ideologies, those embedded in his imagery, were instrumental to Nazism.

Anna's sympathies however were compromised when she agreed, in writing that has been preserved, to make Nazi propaganda. Nazi Minister of Agriculture R. Walther Darré, believing Rudolf to be still alive, wrote to couple's studio to commission him, since the symbolically charged peasant pictures had been noticed by the Nazis. Anna replied, and so began the major commission of her life. 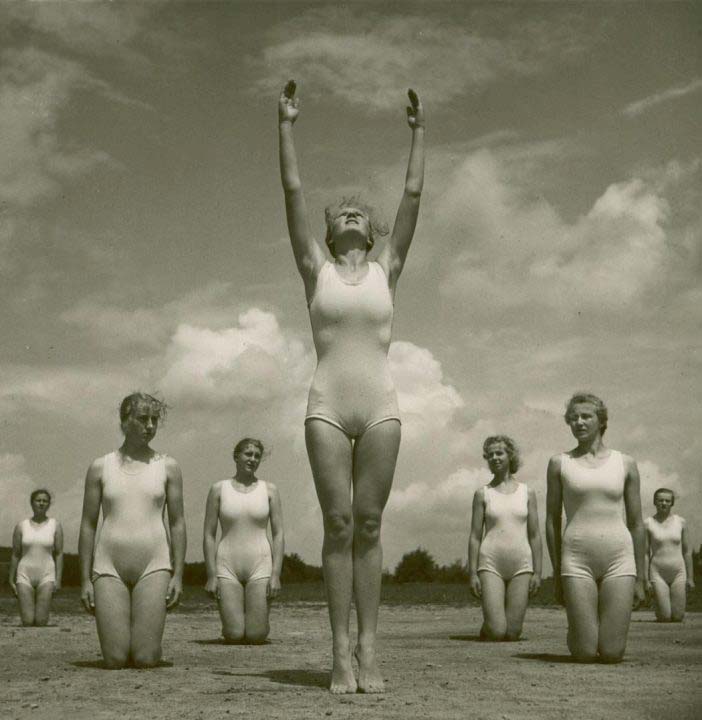 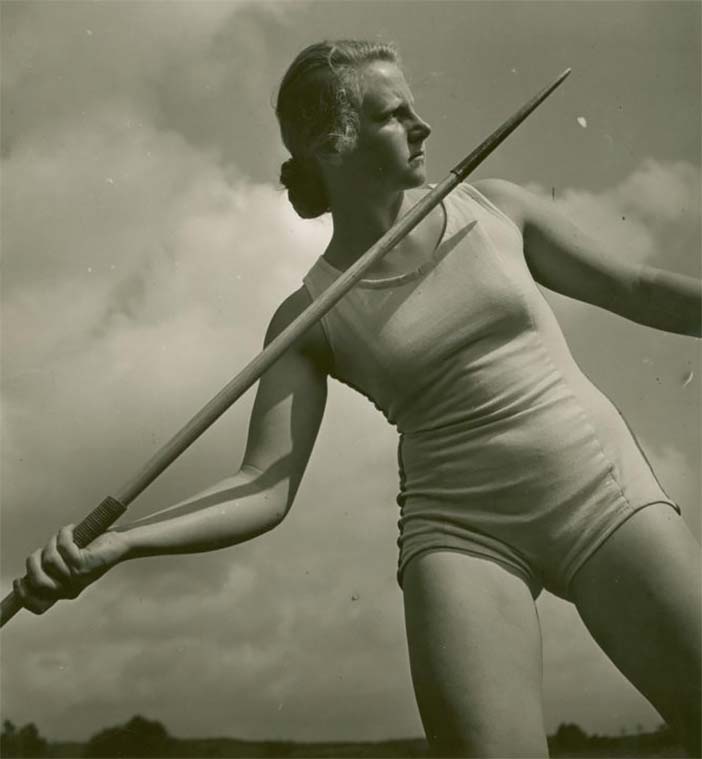 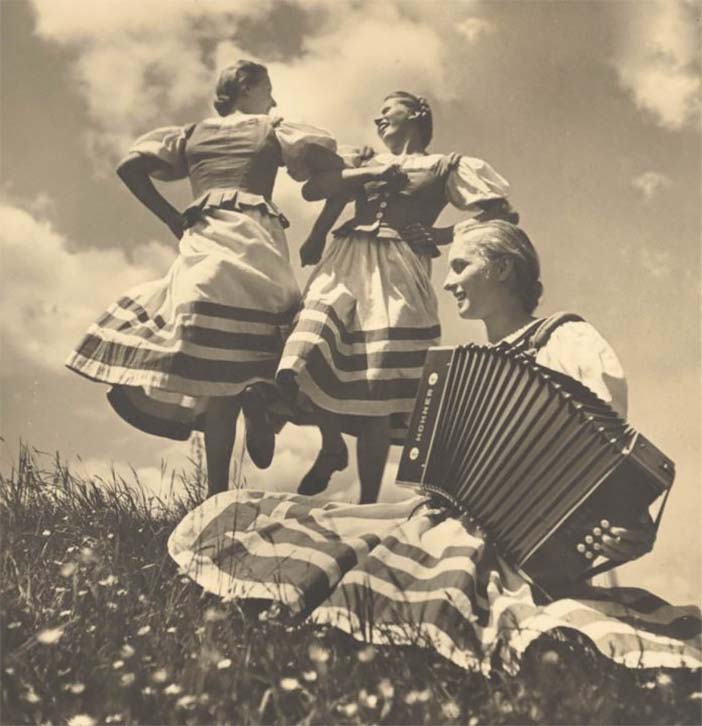 At the the Nazi farming school in Burg Neuhaus, the "Reich School of the Reichsn hrstand for Physical Exercises" Darré promoted Nordic racial purity through eugenics and the "New nobility of blood and soil."

She was to illustrate the experiment, and in 1939, alongside German sports photographer Hanns Spudich, she made heroic pictures of the young, "racially pure" bodies of the young farmers from the Bauernschaft peasantry, varnishing and homogenising their appearance, showing them sometimes in iconic traditional costumes, but usually pure white leotards and dissociated from agricultural labour, and made attractive and athletic according to Darr 's specifications.

Often using only the sky shot through a yellow or orange filter as a background, she followed the successful Koppitz formula to show them performing peasant dances, playing ball games, competing in archery, spear throwing, and in coordinated exercises developed for Neuhaus by Nazi gymnastics ideologist Rudolf Bode. The photos appeared in his gymnastics book, in displays and in Odal, the organ of Nazi propaganda, thereby avoiding any inglorious association with discredited 'art'.

Anna Koppitz would have accepted the brief, had Darré not fallen out of favour with Himmler and been forced to resign "for health reasons", and in 1940, she wrote: "I was happy to promise your minister to work on the blood issue. Whether portrait or nude photography comes down to the same thing for me; it is only difficult to find the right people." As nothing in the archive supplied by her daughter's husband showed Anna to be a subscribed member of the National Socialists, the last sentence leaves one to wonder whether she found Darr 's ideas dubious, but his offers of work simply too hard to refuse three years after the death of her husband; they were certainly an opportunity to profit from the aesthetic that she and Rudolf had developed well before the rise of the Nazis. 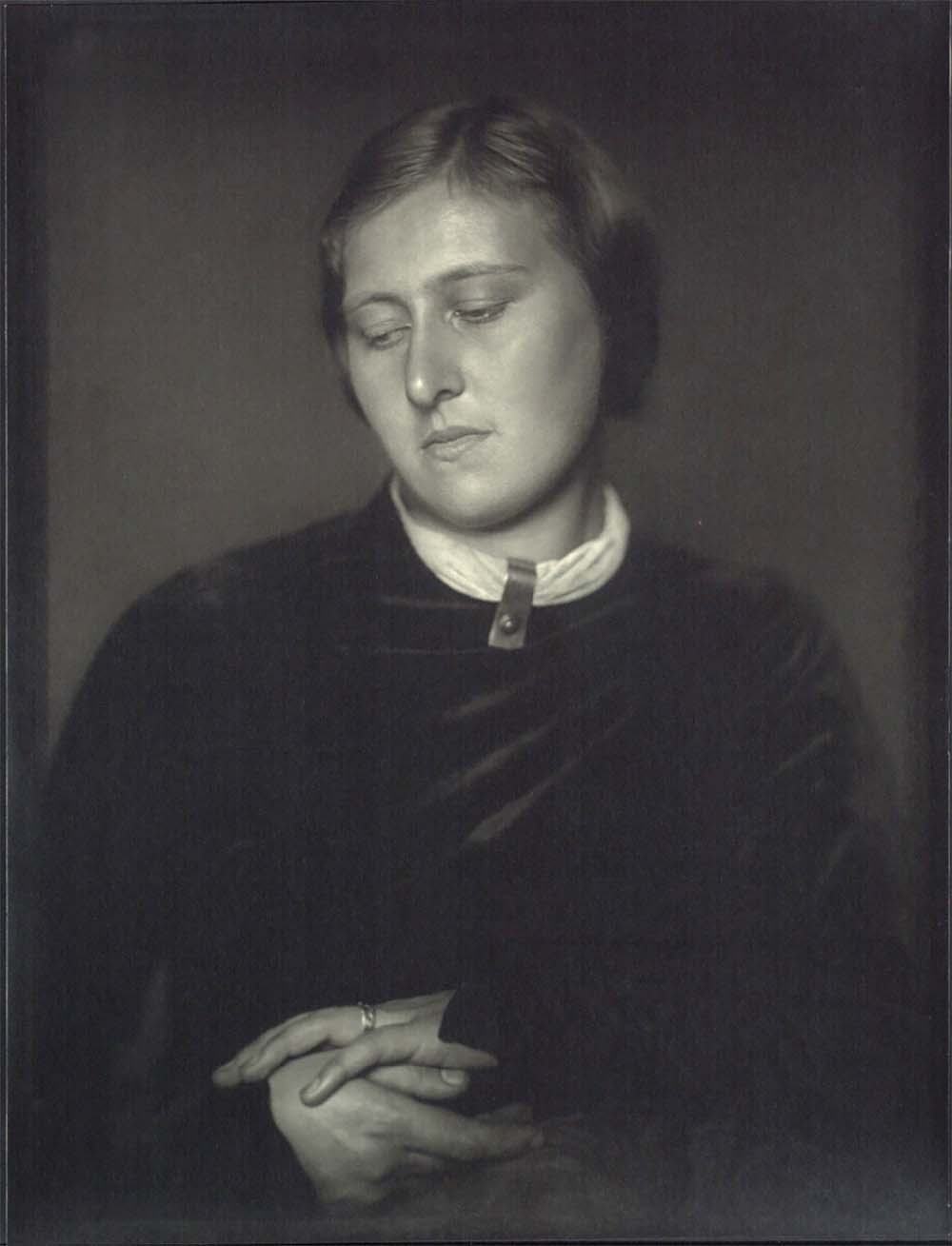 Magdalena Vuković, editor of Serving racial politics : Anna Koppitz’s photographs for Reich Minister R. Walther Darr  (publ. Photoinstitut Bonartes) however, has no such doubt; texts by Elke Fuchs, Gesine Gerhard and Vuković reveal that Anna had willingly pursued political commissions after the Anschluss, and confirm that hers was the propaganda that projected utopian notions of a Nordic Race and German supremacy that justified their destruction of 'inferior' peoples.

Even now, you will find neo-nazi and white suprematist sites that celebrate her work as equal to that of Leni Rheifenstahl, though there you will find no original thought, merely a parroting, and outright plagiarism of Nazi propaganda.

Anna Koppitz lived to the age of 94, and while she was alive her daughter (1925-2011) was also a photographer. Liselotte's works, included with her parents' in a show Photographs 1910-1960 at Galerie Johannes Faber, Vienna, in September 2013, were those from the 1950s and 1960s, modernist, some applied to commercial purpose, distant from politics and oblique in representing the figure, but with the same idealising impulse.

The aesthetic effects of photography from the first had been praised, not for perfection but for verisimilitude, as did Elizabeth Eastlake nearly twenty years after its invention;
"If we look round a photographic exhibition we are met by results which are indeed honourable to the perseverance, knowledge, and in some cases to the taste of man...portraits of the most elaborate detail, and of every size not excepting that of life itself...[landscapes in] large pictures with minute foregrounds, regular planes of distance, and perfectly clear skies. The small attempts at architecture have swelled into monumental representations of a magnitude, truth, and beauty which no art can surpass — animals, flowers, pictures, engravings, all come within the grasp of the photographer; and last, and finest, and most interesting of all, the sky with its shifting clouds, and the sea with its heaving waves, are overtaken in their course by a power more rapid than themselves."

Digital imaging has brought to photographers the capacity to 'improve' images that rival even the famed high resolution of the daguerreotypists' plates. Certainly the latter made every effort, through lighting, pose, props, and even hand-colouring to flatter their human subjects, but even beyond the cosmetic 'enhancement' of celebrities, today we witness a shift by some 'art' photographers toward a discomfiting perfectionism. 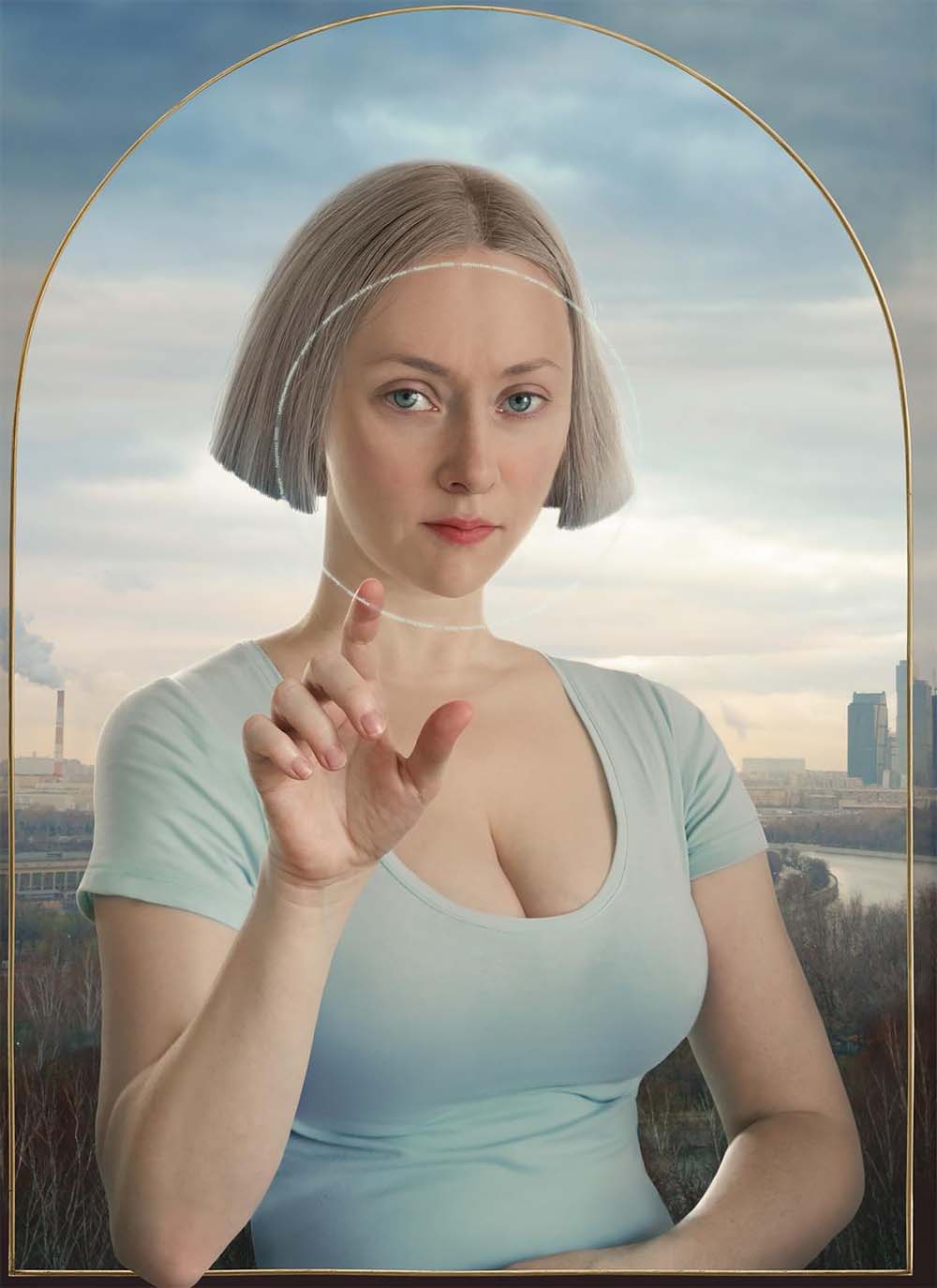 Katerina Belkina's chilly and immaculate imagery would be the envy of most aspiring 'digital artists' and with its appearance in the most recent edition of Art Market, is evidently desirable amongst collectors, but she emphasises that her art is "digital painting based on photography;"
"First, I shoot, combine several frames into one in photoshop, and then start the painting on the top in additional layers, as if I was painting with real brushes and oil paint. But I paint it in the program. I work a lot to create and add many details that are not existing in the original photos, so here, my skills in drawing get the full meaning. This long drawing process usually takes over one month for each artwork."

In titling her series Revival, from which the image above is drawn, Belkina proposes it as a "Neo-Renaissance," the antithesis to which she asserts is "pop culture — the culture of the masses." Her fastidiously produced imagery contains reference to the real world 'texture' of smoke stacks, polluted skies and high-rise buildings. We understand and accept them as a transparent fiction in an era in which story , for good or ill, has become all-pervasive.

However as we move beyond the realm of truth and reality into Mark Zuckerberg's "Meta-reality" do we need to beware of "photo-suprematism"? James McArdle

James McArdle
Artist and recovering academic enlightened by the metaphoric potential of focal effects and the differences between human and camera vision.
Stay up-to-date  with call for entries, deadlines and other news about exhibitions, galleries, publications, & special events.
Advertisement