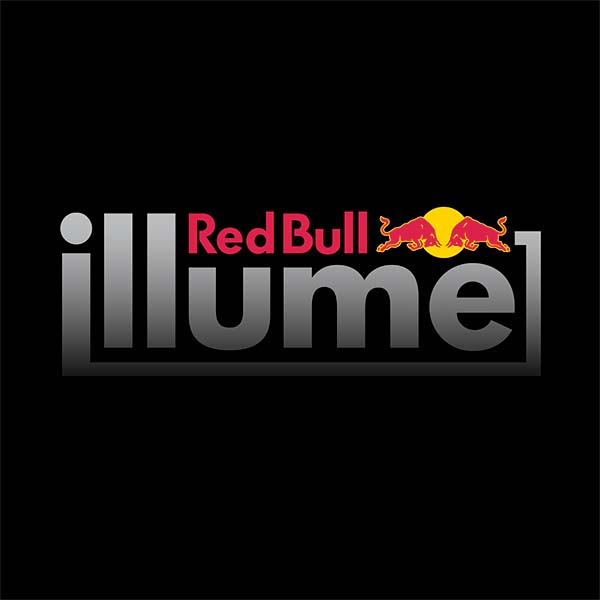 Red Bull Illume is the world's greatest adventure and action sports imagery contest which has been going on for over a decade. It showcases the most creative and captivating images on the planet, while illuminating the passion, lifestyle and culture behind the photographers that shoot them.

In 2006, Red Bull Illume was founded by Ulrich Grill, a passionate photographer and former Red Bull athlete. At the time, he was running training workshops for photographers, and he realized there weren't any photo contests dedicated to adventure and action sports. The idea for the Red Bull Illume Image Quest was born – a contest to celebrate not just the images, but the people behind the lens who go to such extraordinary lengths to capture the shot.

Since then, Red Bull Illume has established itself as one of the biggest photography contests around the world. Each year an international judging panel of 50 photo editors and photo experts select around 50 finalist images. The winners of Red Bull Illume Image Quest 2021 just have been announced and were awarded with beautiful trophies and incredible prize packages from our partners!

The finalist images then tour the world as part of the unique Red Bull Illume exhibition. In addition, the winning images will also be printed in the limitededition Red Bull Illume Photobook, to give credit to the photographers and honor their hard work.

The Image Quest 2021 is the sixth edition bringing together the amazing work of photographers and content creators from around the world. Submissions for the contest ran from March 1 to August 1, 2021, and were entered on redbullillume.com and Instagram.

A judging panel of 53 photo editors and experts selected the 56 finalists, 11 category winners and 1 overall winner. This year, the total value of prizes for the winners exceeded €200,000. However, the real prize is priceless – which is all of the prestige and exposure associated with being an official Red Bull Illume Winner!

From November 29, the Red Bull Illume Finalists and the 11 Category Winners were announced daily, building up to the unveiling of the Red Bull Illume Overall Winner on December 4, 2021. Twice a day for five days, the finalists and winners of two categories were announced live on social media and on redbullillume.com, bringing the experience to fans all over the world for the first time.

Will Saunders was unveiled as the overall winner on Saturday, December 4, 2021, during the opening of the exhibition in Aspen Snowmass, CO, USA. 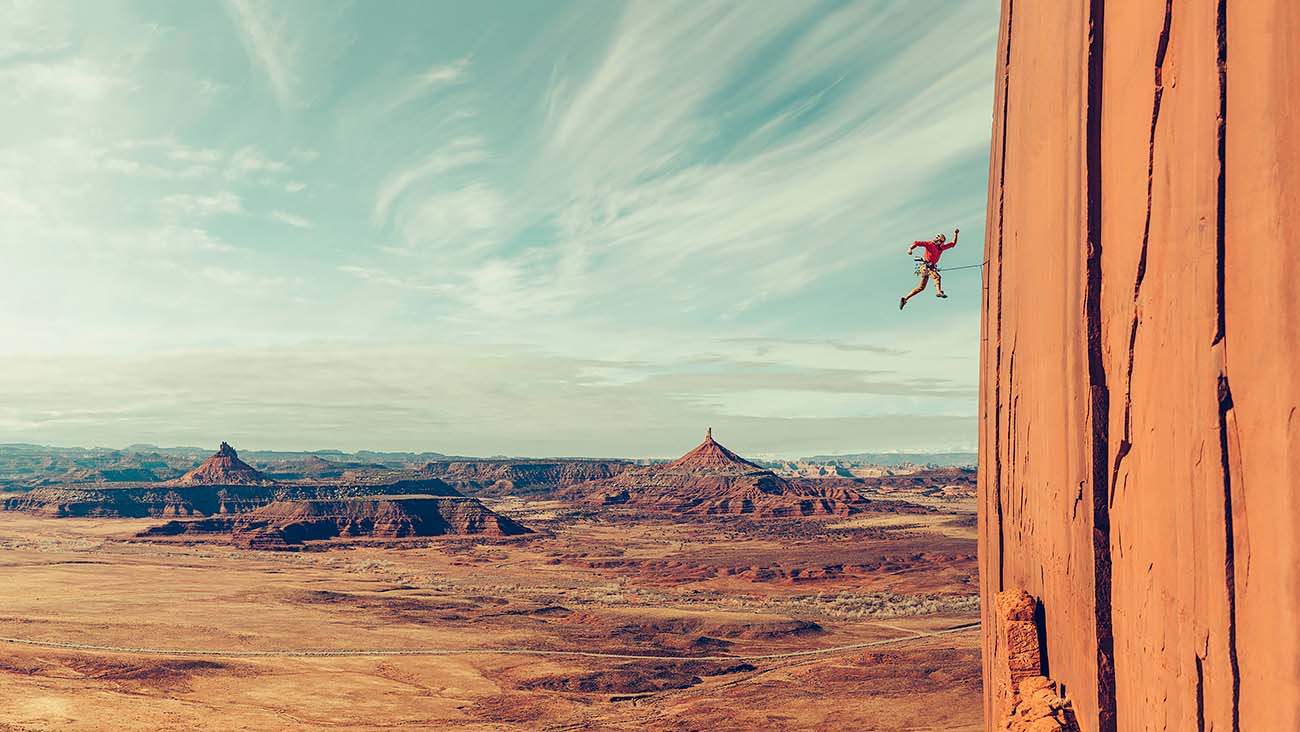 Chase after those conceptual thoughts because that is where unexpected moments come to life.
Whenever I go out to make some images, I do my best to come back with something that I haven't done before. I've shot whippers many a time, but this time I wanted to try something a little different. A group of us rallied out to my favorite place in the desert to get some climbing in and make some imagery along the way. I asked Jake to really shape his body into more of a powerful movement rather than the classic falling position. With grace and style, Jake pulled this shape out of the air, allowing me to capture an image that is unique compared to most of the literal climbing imagery we see. His body reminded me of a superhero, which is fitting to me because most of my friends in this action sports world are my heroes. The ticket here was to just push the conceptual idea enough while also grounding the image in reality.

Will Saunders
I grew up in a small town of 2,000 people where half the crowd were hippies and the other half were cowboys in the heart of Oregon. We all got along and I kinda rode the line down the middle. I always hung out with both sides, constantly in awe of my friends and what they do in their daily lives. It wasn't until I was 19, when a professor convinced me to pick up a camera for the first time. I fell completely in love with the art of making an image, I was truly obsessed. Making images of my friends who were badass kayakers, bikers and climbers. Working closely with mentors and constantly learning, I started to build my own style and understanding of the industry. Today I live in Utah still chasing this obsession of making images that impress my mind. I’m lucky to be surrounded by an incredible team and a talented group of good humans that push me every day.
Will Saunders' Website 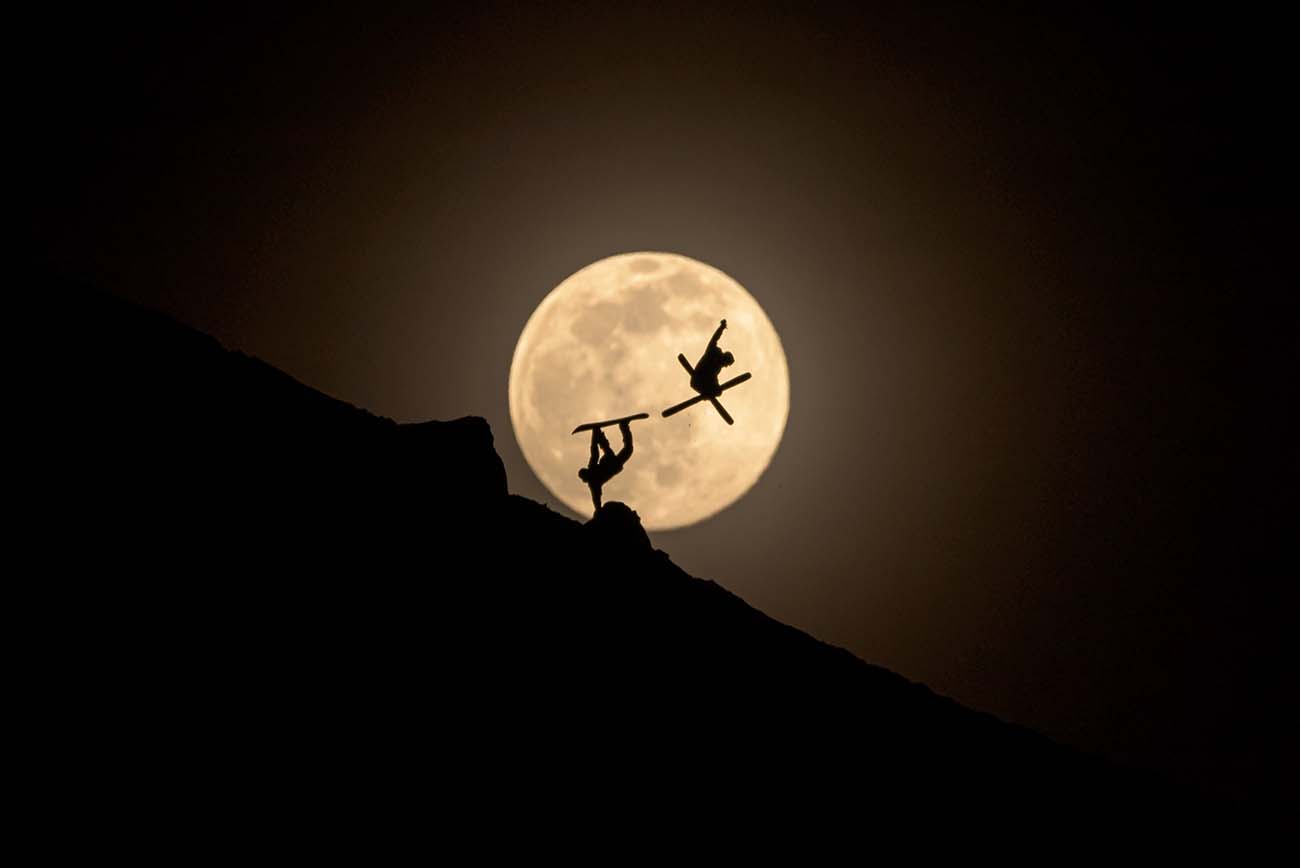 We worked hard for a week, just planning and preparing the terrain for this shot. What's particularly difficult to achieve in a shot like this one is to place the two kickers in the right place a couple of days before. Even more tough is that it needs to be taken at 3,000m high with the heavy gear you need to take the shot. Once you have the scenery ready, you just have to wait for the moment and pray for a bluebird sky that day, along with being confident in the riders to synchronize the jump and the handplant. That's the real challenge. On the day, we went for an epic sunset session, testing the kickers and training for the moon shot. Then, when the moon was rising I went to my place 300m away, communicating via walkie-talkies. What's really amazing is that we took the shot on the second try – the photo is the result of great teamwork.
Yhabril's Website 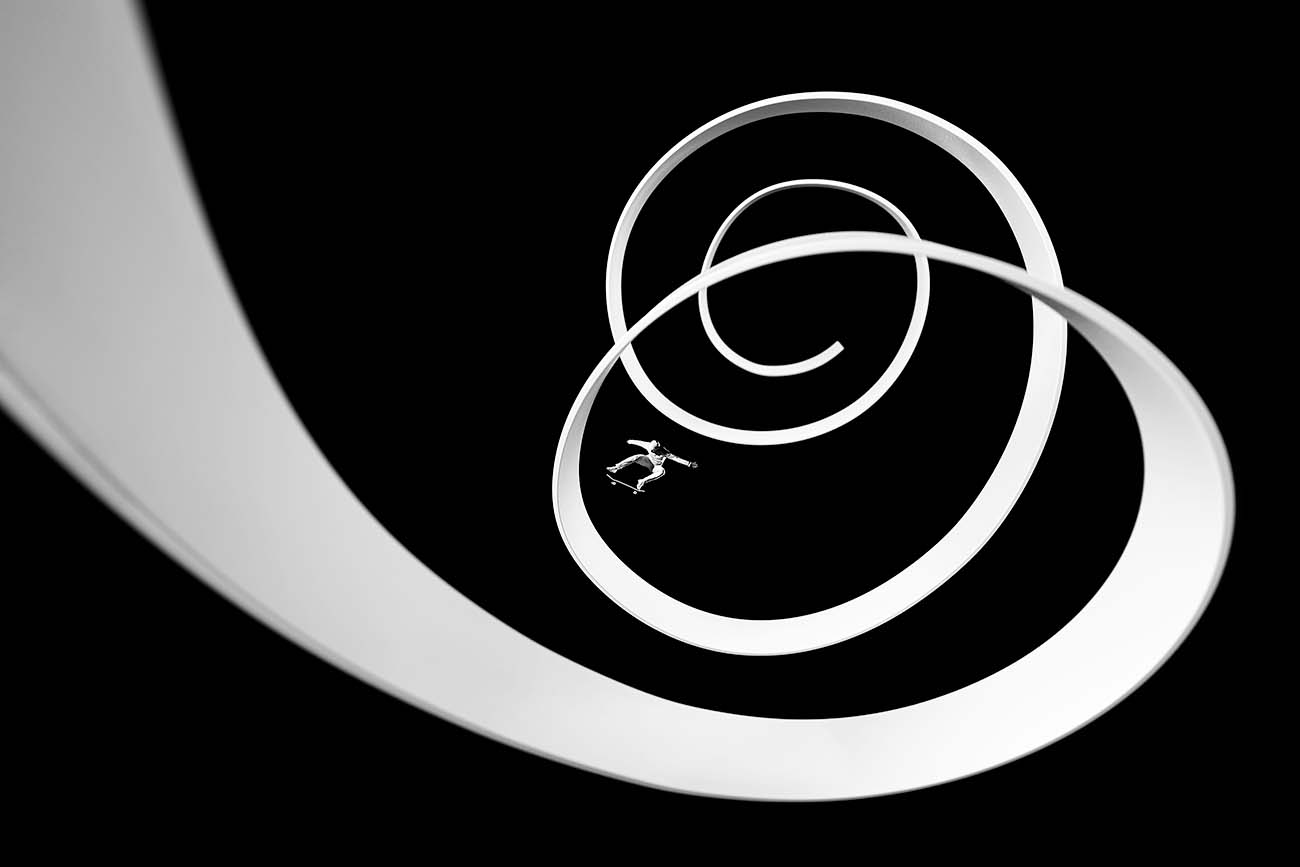 The idea of capturing this shot snuck into my mind as a side effect from a campaign I produced based on an optical illusion called ‘forced perspective’. It sounds like a pretty sophisticated technique, but it’s basically exactly what thousands of tourists do when holding the leaning Tower of Pisa, hoping to get a unique photo of their holiday in Italy. It’s very similar for most adventure and action sports photographers. It doesn’t really matter if we’re on vacation, on a shoot, or just going on a random walk through the city – our imagination recreates interesting pieces of architecture into an action sports playground. With a tool like forced perspective, I felt like I could push it a little further, bending reality and bringing the athlete into an absolutely surreal environment.
Jan Kasl's Website 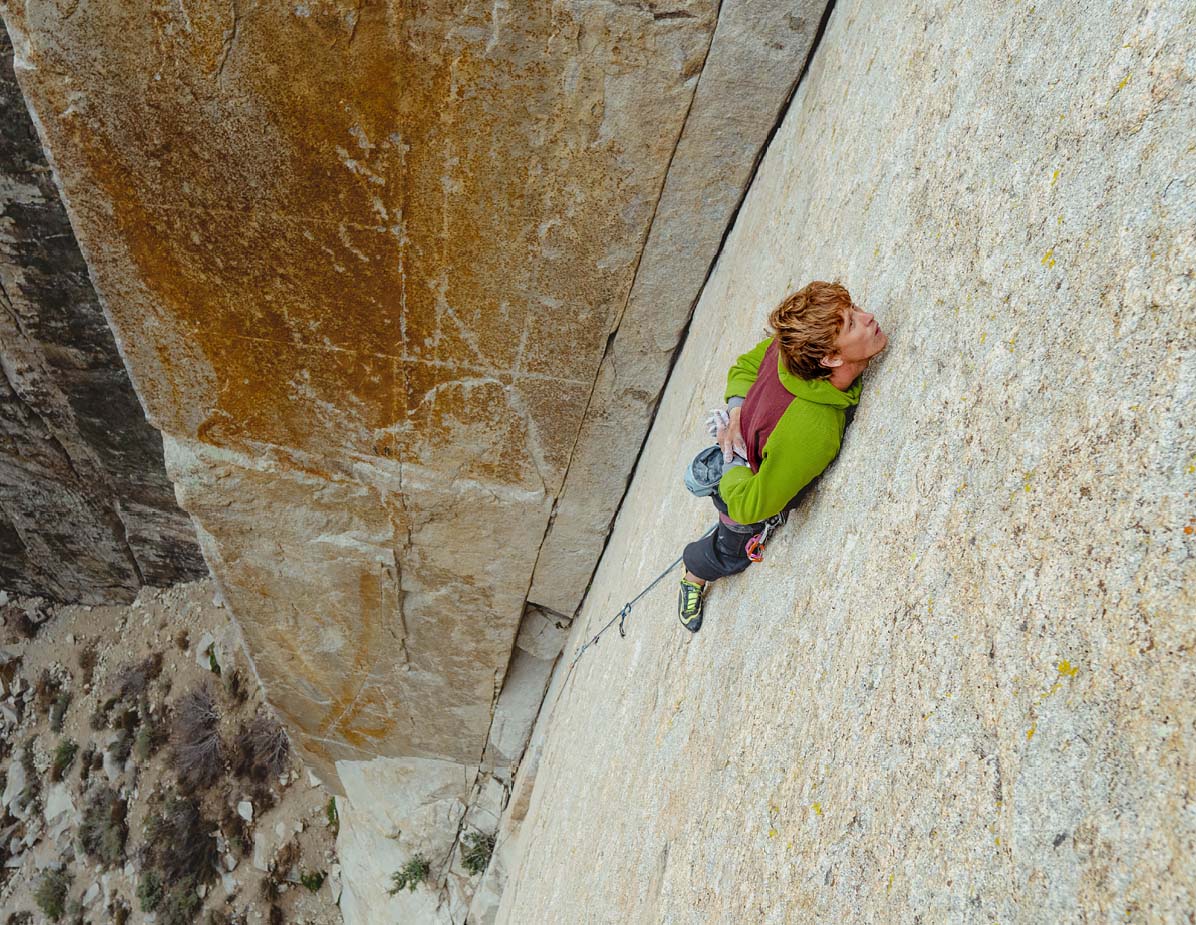 My friends and I spent the winter of 2021 living communally in an assortment of vans and cars amidst the Buttermilk’s monstrous granite boulders in Bishop, California. Our days looked like this: wake up, drink coffee, go climb. With our bouldering season coming to a close, as the snow melted and thoughts of long Yosemite climbs loomed, Jack grew eager to test his fitness on ‘Queen of Heartbreaks’ in Pine Creek Canyon. Before tying into the sharp end Jack was clearly nervous. From the ground, the route’s 39 meters were daunting and blank. The holds remained obscured to me even as I ascended the fixed line to find the best position to shoot from. The sky darkened and the winds picked up as Jack stepped onto the climb for his onsight attempt. Questing up the blank face, Jack found a cheeky no hands rest. Doubt cleared from his face as I snapped the shot. Even as it started raining upwards, Jack cruised to the chains.
Victoria Kohner-Flamagan's Website 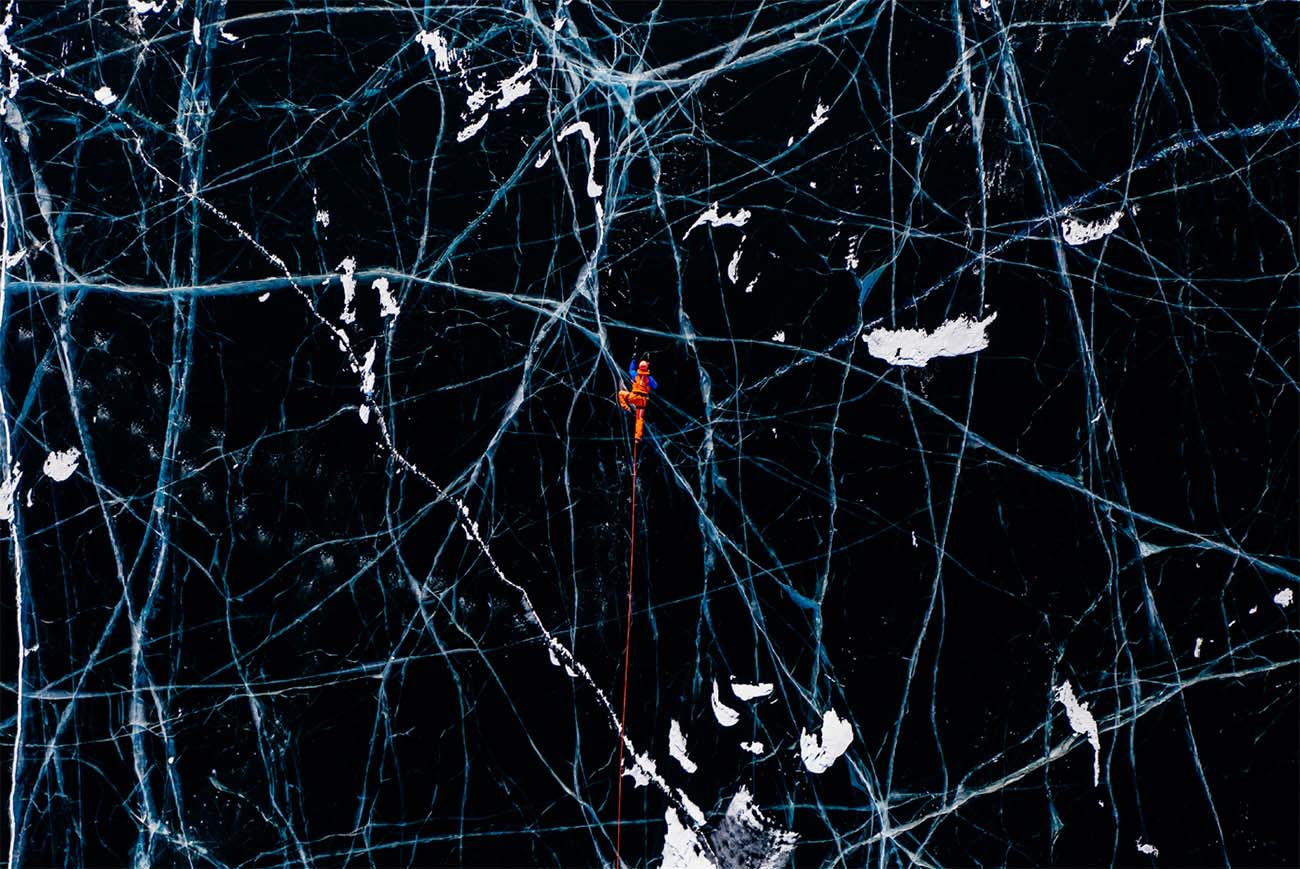 In February 2020 we traveled to Siberia with Mammut Pro Team athlete Dani Arnold for a challenging expedition above the deepest lake on earth, Lake Baikal. Siberian winters present difficult and fascinating conditions. The successful expedition involved moving from the lake’s expanse of ice, to the vertical ice wall, and opening ten new climbing routes. We found favorable conditions, challenging Dani in his favorite ice climbing area.
At this time of year, conditions are extreme, with temperatures as low as -35° Celsius; for this reason, virtually no athlete has attempted ice climbing above the deepest lake in the world. The challenge proved tough from the beginning; cold temperatures, poorly documented climbing areas, and an unknown language made the search for climbing areas very demanding, requiring a lot of energy from our team, mentally and physically. Since we could only move around the frozen lake on a hovercraft, just the search for the perfect shot proved to be a unique adventure, with technical breakdowns at nightfall, exhaustion of fuel and heating. The first steps on the ice of the lake were impressive – to see clearly through the thick ice of the deepest lake in the world was an extraordinary and absolutely unforgettable experience.
Thomas Monsorno's Website