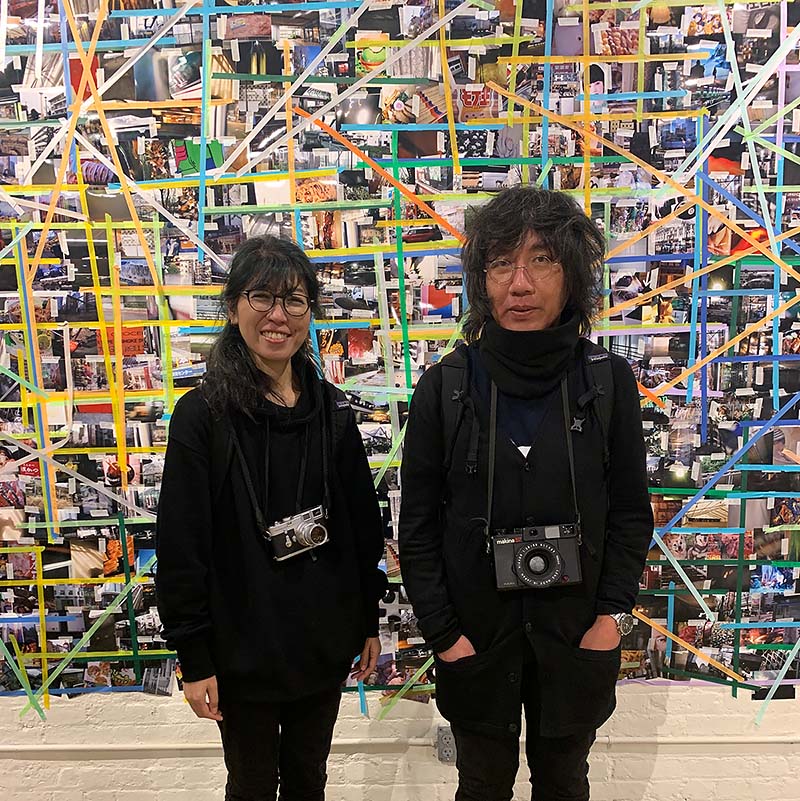 dieFirma is pleased to announce the relaunch of their Cooper Square location with site-specific installations by celebrated Japanese photographers Osamu Kanemura and Hiroko Komatsu for their New York City debut. Their immersive installations, one on each floor of dieFirma, are extraordinarily sensorial. The viewers are not only invited to look at, but really to interact physically with an amazing array of prints, books, and photographic objects. Bold and rich, aesthetically as well as politically, their work is a reaction and an antidote to our isolating digitized world.

In his largest installation to date, Kanemura's Looper Syndicate displays 20,000 color prints applied in a sprawling, immersive wall collage, alongside a video projection. Famous for his carefully framed black and white Tokyo cityscapes, Kanemura found it liberating to spontaneously shoot the city's colorful signs and shapes with a compact digital camera. Simultaneously, Komatsu's Sincerity Department Loyal Division presents an entirely new environment for her award-winning installation made of precariously arranged black and white silver gelatin prints densely covering the wall and floor, long rolls of uncut photographic paper draping from the ceiling, and 8mm film screened in a CRT monitor. Visitors are invited to step on layers of photographs that line the floor, reminiscent of construction sites filled with overlooked and discarded debris. Both exhibitions display a series of Artists' Books created specifically for dieFirma. 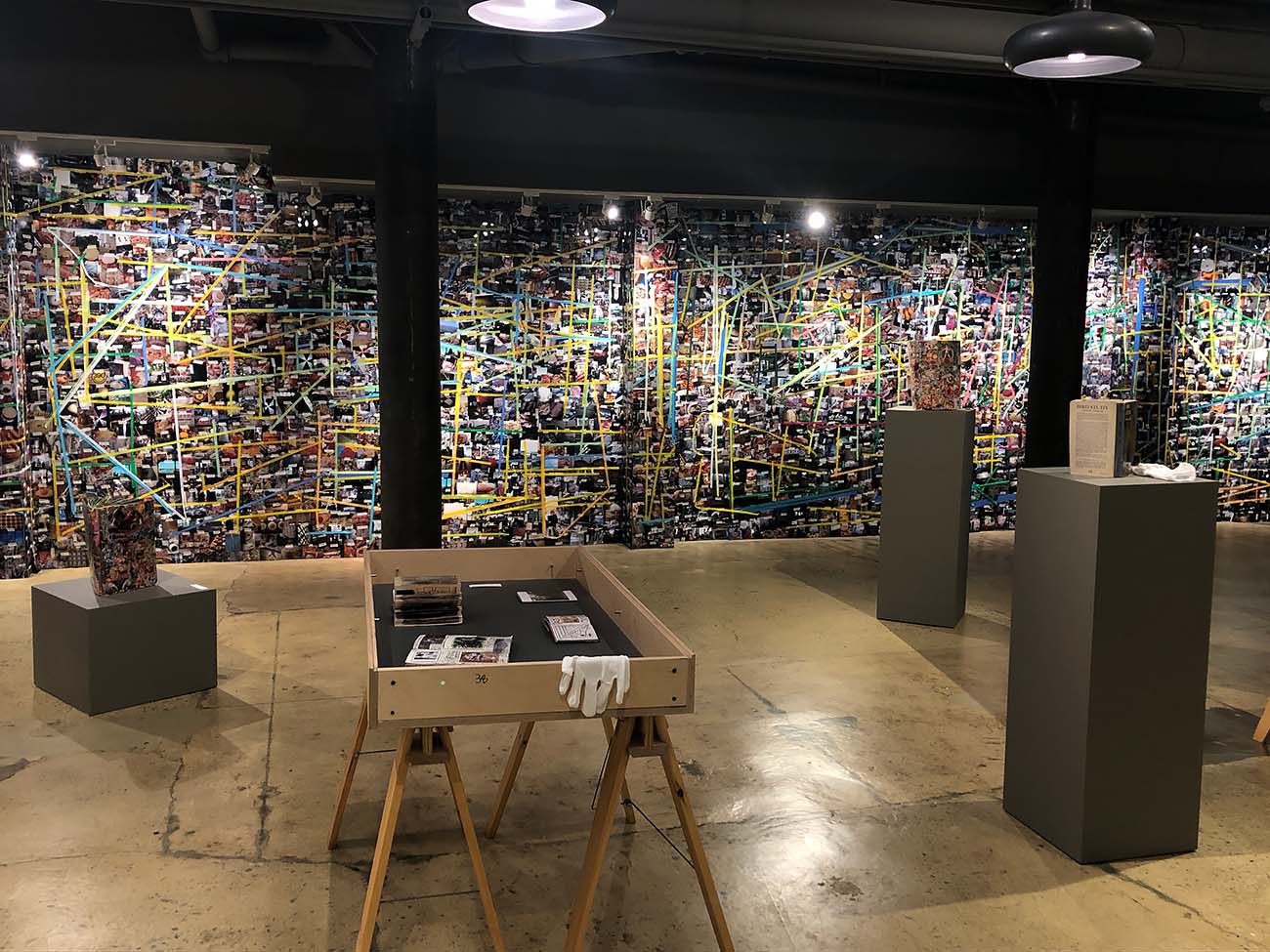 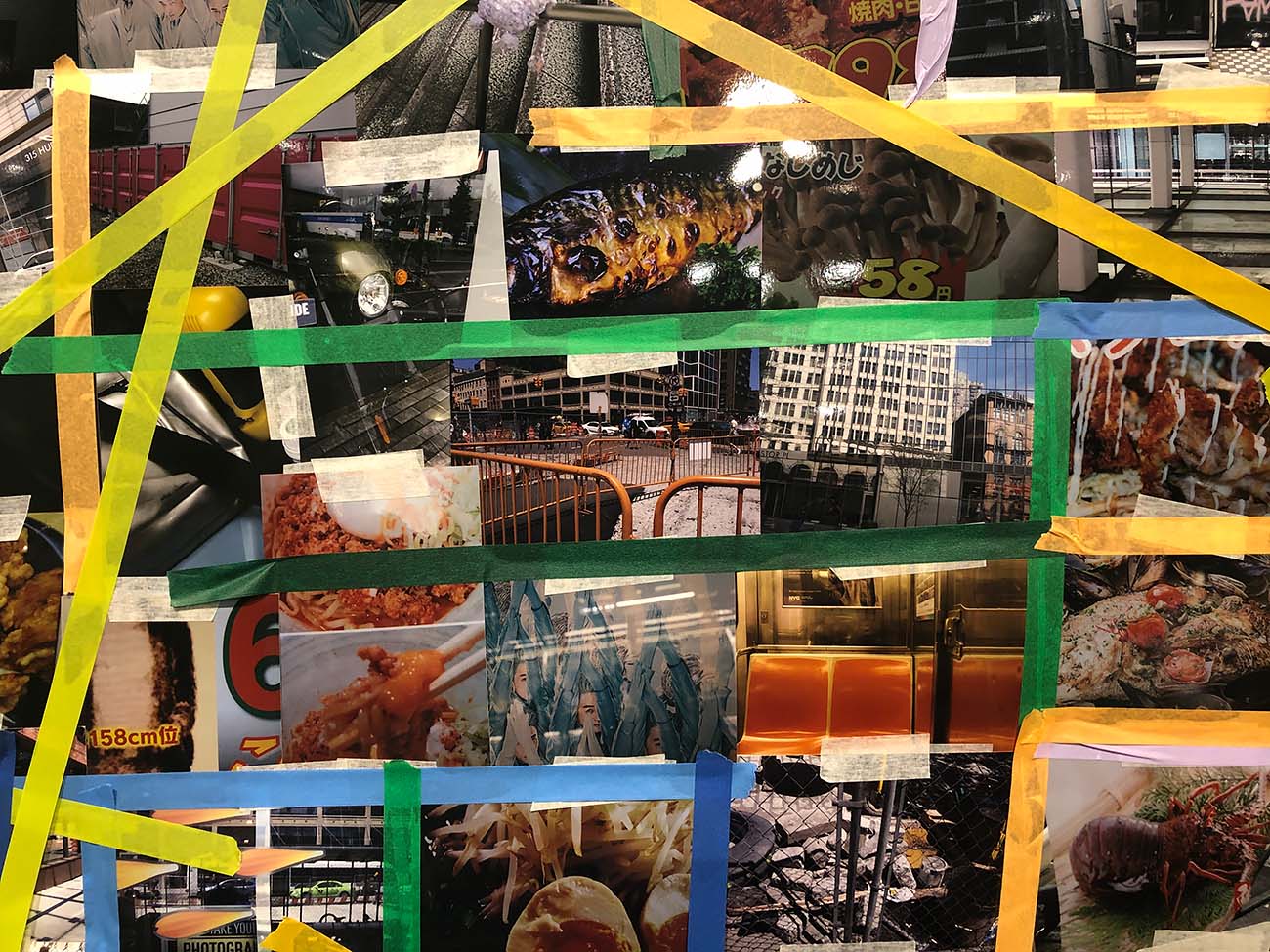 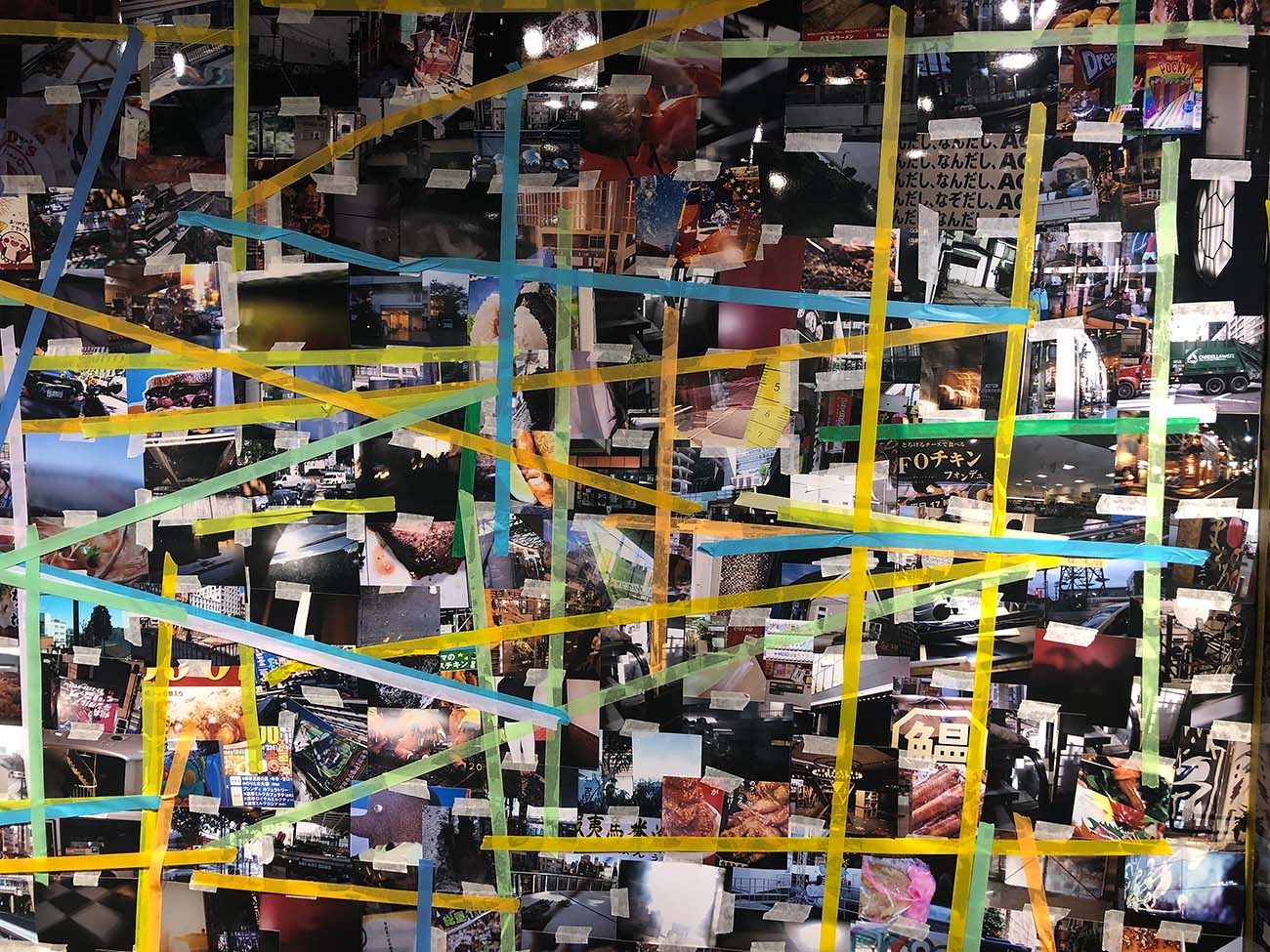 "Both artists' works are counterpoints to the proliferation of digital work and are deeply rooted in the physicality of their mediums, pushing the boundaries of photography to the extreme," shares dieFirma Founding Director Andrea Stern. "With this exhibition we continue our dedication and commitment to the tactile and physical experience of art , and we find the work of Osamu Kanemura and Hiroko Komatsu to be an antidote to the relentless screen experience we have all recently endured. " In Looper Syndicate, a claustrophobic feeling emerges from Kanemura's landscapes without a horizon line and the notable absence of negative space. The installation displays Kanemura's idea of photographic "extra-technique" in an era when standard photography techniques have become accessible to all and photographs ubiquitous, questioning the importance of human subjectivity in the process of capturing an image as an expression of individuality.

"A friend of mine saw one of my collages and said, 'my eyes are almost vomiting' when I look at your book. Kanemura says of his collection of Artist Books completed for the exhibition. I always thought that photography was in itself, a substance. People think that photographs are images, but photographs are integrated within a few millimeters of thin paper. The images don't just exist; they exist upon the surface of the paper. When the material, physical aspects of photographs disappear, it is deeply unsatisfying."

Since 2018, Kanemura has been making collages and Artists' Books by dismantling and rebuilding other people's photographs, texts, and printed matters: propagating from the overflowing repository of materials that surrounds our daily lives—an endless loop of remixing images. By doing so, Kanemura touches upon the concepts of non-editing. Instead, art collectors are invited to make their own selection by choosing a fraction of the installation, sold in a custom 30x40" frame. 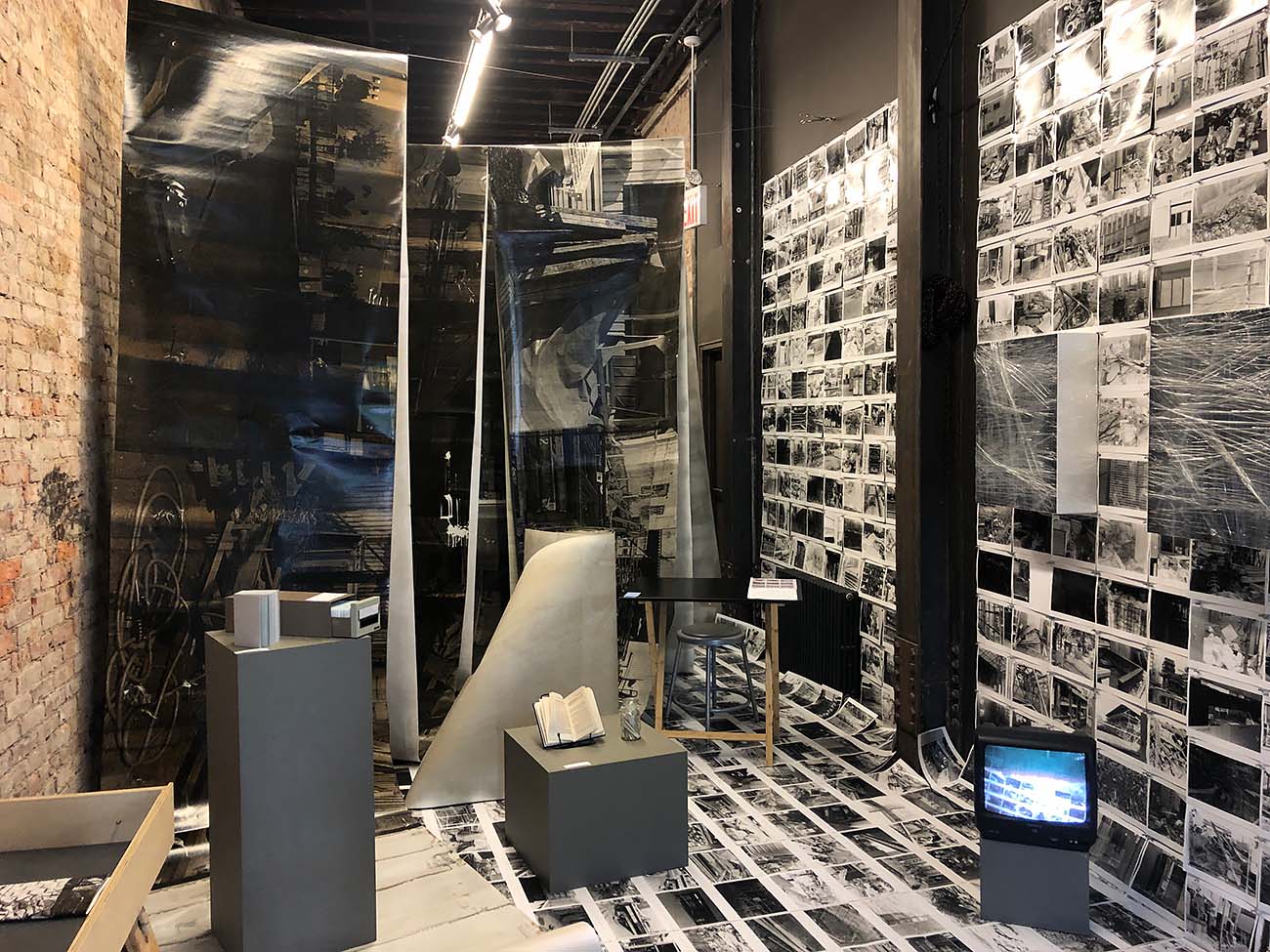 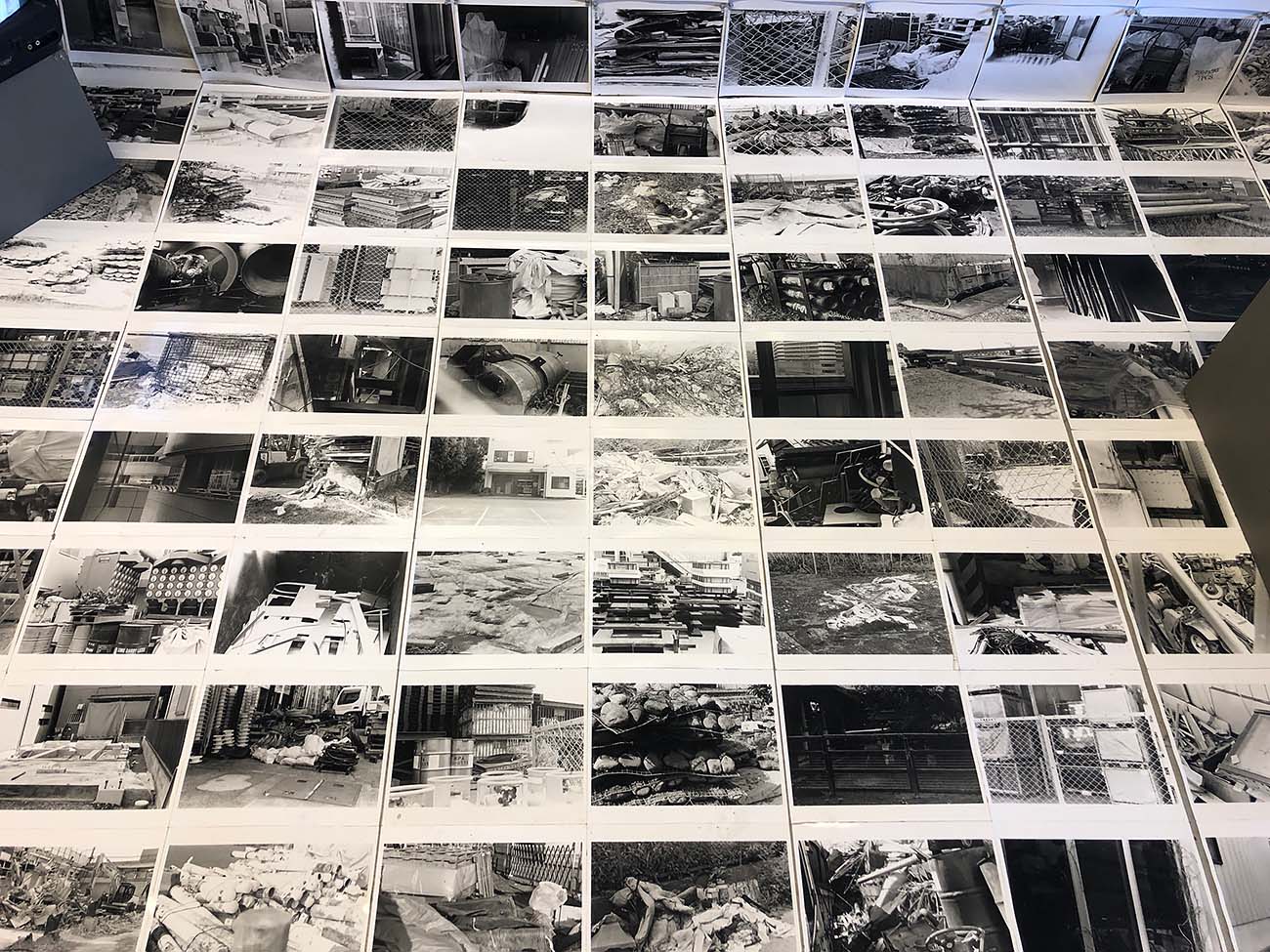 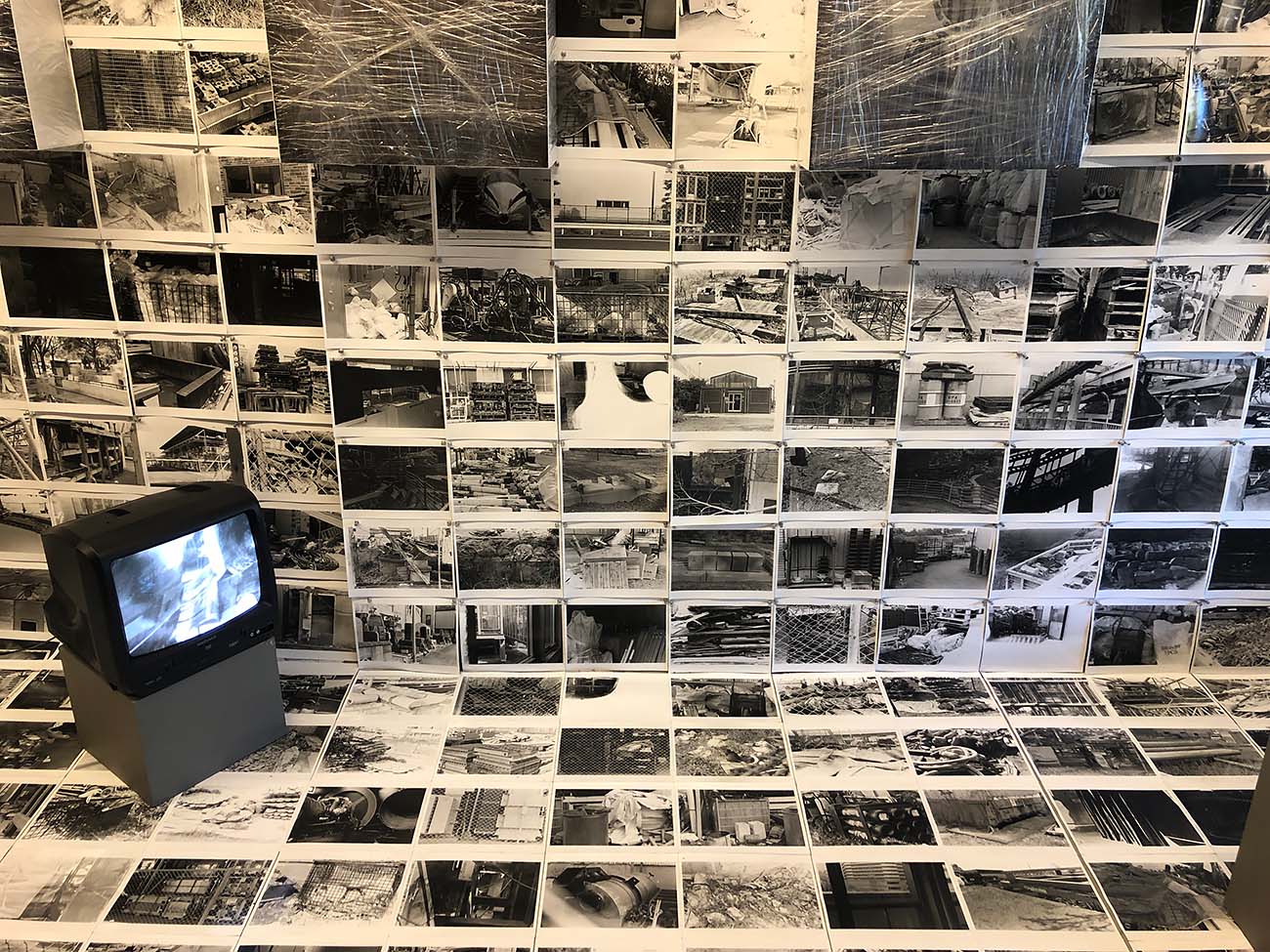 Occupying the ground floor of dieFirma's gallery is Hiroko Komatsu's Sincerity Department Loyal Division, which also pushes the boundaries of photographic prints in today's increasing dematerialization of images. The subjects of her photographs are construction or waste materials: pipes, tubes, ropes, poles, plates, various different-shaped tools and supplies. Instead of exhibiting each photo as a single piece, Komatsu creates a crowded space, using the accumulation of repetitive images of these construction sites so that no single photo is distinguishable from the whole. As in her hand-made books, "the prints in the room have their own rules and patterns that speak to each other. They are parts, but I don't know what the whole would be, yet it feels like the parts themselves have their own realm between construction and destruction," Komatsu says.

Hiroko Komatsu (b. 1969) is a photographer born in Kanagawa, based in Tokyo. Komatsu's award-winning large-scale gallery installations and hand-made photobooks explore the vital materiality of photographic images in the context of the increasing dematerialization of images. Her works have been featured in many exhibitions, including The 43rd Ihei Kimura award winner's exhibition in 2018, Nikon Plaza Osaka, and Nikon / THE GALLERY Shinjuku, Tokyo, the 2019 'DECODE / Events & Materials, The Work of Art in the Age of Post-Industrial Society,' The Museum of Modern Art, Saitama. Her work is in the public collections of MAST (Bologna, Italy) and Tate Modern (London, UK). She received the 43rd Ihei Kimura Award for her installation in 2018.