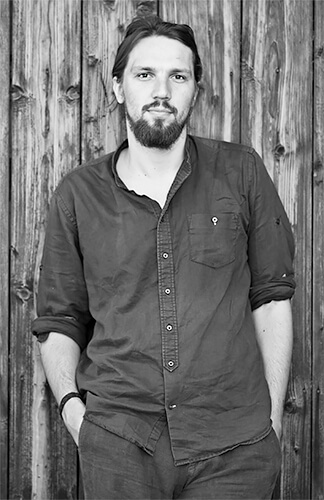 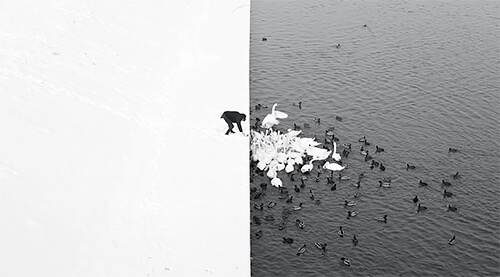 PreviousNext
© Marcin Ryczek
Country: Poland | Born: 1982
Marcin Ryczek was born 1982 in Lublin (Poland). He lives and works in Cracow. His photography refers mainly to symbols and geometry. "Minimum form, maximum content" is the essential principle that characterizes his photos.

His photographs have been presented at exhibitions in USA, Denmark, Holland, Italy, Austria, South Korea, England, Romania, France, Poland, Germany, Japan, China, India … His photos have been published in the press and other media around the world, among others: The Guardian, Der Spiegel, Yedioth Ahronoth, La Repubblica, Politiken, Athens Voice, The Daily Telegraph, National Geographic...

One of the most influential American website The Huffington Post has recognized his photo as one of the 5 best photos in the world in 2013. This photo "A man feeding swans in the snow" was admitted to the prestigious collection of the Bibliotheque Nationale de France and the Silesian Museum in Poland.
Website:
www.marcinryczek.com
Share:
Selected Work:
Marcin Ryczek

Eric Kim
Nationality: United States
Born: 1988
Eric Kim is an international street photographer currently based in Los Angeles. Through his blog and workshops, he teaches others the beauty of street photography, how to find their own style and vision, as well as how to overcome their fear of shooting strangers.

In the past he has done collaborations with Leica, Magnum, as well as Invisible Photographer Asia. He is currently an instructor at UC Riverside Extension, teaching a university-level street (…)
All About Eric Kim

Prokudin-Gorsky was born in the ancestral estate of Funikova Gora, in what is now Kirzhachsky District, Vladimir Oblast. His parents were of the Russian nobility, and the family had a long military history. They moved to Saint Petersburg, (…)
All About Sergey Prokudin-Gorsky

Joanne Teasdale
Nationality: Canada
Born: 1958
Joanne Teasdale, an exhibiting abstract painter in her twenties, later returned to art, translating her life experiences into meticulous photorealist paintings, then photography. Teasdale, whose artwork explores the human experience and where light plays an important role in the rendering of the images, was naturally drawn to the capabilities of glass. In recent years she began studying the medium intensively under the tutelage of established artists, adding kiln formed (…)
All About Joanne Teasdale

Alexa Moon
Nationality: Russia Federation
My name is Alexa Moon. I am a fine art photographer with Russian roots. Now I am living and creating in the small city Neumuesnter in North Germany. My photography journey began at the age of 19. That was the time when my family passed away and I realized in that moment that life is too short to do things that you don't love. So I quit my university in Russia where I was studying political science before which I didn't enjoy and came to Europe to follow this new philosophy (…)
All About Alexa Moon

Alexey Titarenko
Nationality: Russia/United States
Born: 1962
Alexey Titarenko is a Russian American artist. He began taking photographs at the beginning of the 1970s, and in 1978 became a member of the well-known Leningrad photographic club Zerkalo, where he had his first solo exhibition (1978). Titarenko graduated from the Department of Cinematic and Photographic Art at Leningrad's Institute of Culture in 1983.

Since this was creative activity that had no connection with the official Soviet propaganda, the opportunity (…)
All About Alexey Titarenko

Oliver Curtis
Nationality: United Kingdom
Born: 1963
Brought up in the Cotswolds, Curtis began his photographic education studying photography at the renowned course at Filton Technical College in Bristol. He went on to study film and television at the London College of Printing and has been balancing work in stills and moving image ever since. Curtis continues to produce stills portraiture for major broadcasters as well as generating his own projects for exhibition and publication. He sites as key influences William Eggleston,(…)
All About Oliver Curtis

Laurence Demaison
Nationality: France
Born: 1965
Having practiced various means of artistic expression (painting, drawing, sculpture) since childhood, and completing formal training in architecture in 1988, Laurence began her self-taught journey into photography in 1990. Particularly interested in the female portrait and nude, and finding it difficult to adequately convey her mental images into words and direction, she gave up on the use of models and began to use herself exclusively as the subject of her photographs.(…)
All About Laurence Demaison