Share:
Country: Italy | Born: 1980
Fabio Bucciarelli is an award-winning photographer and journalist known for his documentation of conflicts and humanitarian consequences of war. Fabio spent the last years covering the major world changing events in Africa, Middle East and Europe. He reported from Libya - from the beginning of the civil war until the death of Gaddafi - from Syria - during the bloodiest battle of Aleppo - from Rojava and Iraq and from the African forgotten countries including South Sudan and Mali. Fabio feels the urgency to tell the stories of people who are rendered powerless and provide unbiased information focused on human rights.

In 2013 his coverage of the Syrian war was recognized with the Robert Capa Gold Medal awarded by the Overseas Press Club of America. Fabio has also been prized by World Press Photo, Prix Bayeux-Calvados, Pictures of The Year International, Best of Photojournalism, Days Japan International, Sony International Photography Award, Master Report Award and Ponchielli Prize between other awards and citations. 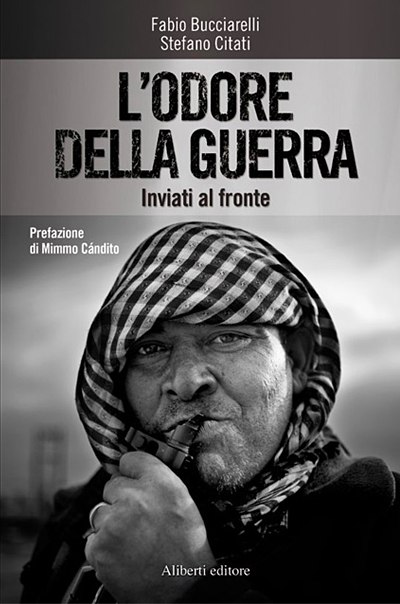 L'odore della guerra. Inviati al fronte
Author: Fabio Bucciarelli, Stefano Citati
Publisher: Aliberti
Year: 2012
What do you feel when you are on the front line, surrounded by guerrillas and exposed to fire? The senses are alert, peaks of adrenaline and moments of quiet (before the storm) are followed in a swing of thrilling emotions. When you are on the front line, where fighters fight for something that has become more important than their own lives, you only know that you are risking everything because of the importance of being there and of communicating to the world what is happening. In a day at the front, in the war, bonds are formed, friendships, coincidences: but the rhythm of the days often burns everything that has been built. Because there, at the front, you are exposed to the fate of the moment, in the grasp of events that none of those around you can control. At the mercy of history.

Chris Killip
Nationality: United Kingdom
Born: 1946
Born in Douglas, Isle of Man in 1946, he left school at age sixteen and joined the only four star hotel on the Isle of Man as a trainee hotel manager. In June 1964 he decided to pursue photography full time and became a beach photographer in order to earn enough money to leave the Isle of Man. In October 1964 he was hired as the third assistant to the leading London advertising photographer Adrian Flowers. He then worked as a freelance assistant for various photographers in (…)
All About Chris Killip

Deborah Turbeville was born in 1938, in Boston. Summers were spent in Ogunquit, Maine. 'Beautiful Place by the Sea' is the oceanside township's motto. 'Very bleak, very stark, very beautiful,' was Turbeville's description of it. Life was comfortable - she went to private school. Yet her mother described her as a 'shy and scary child'. Which is as it should be. The uneasy shuffle of ambiguity is the essence of Turbeville and her work - which itself shuffles between fashion (…)

All About Deborah Turbeville

Herbert List
Nationality: Germany
Born: 1903 - Died: 1975
Herbert List was a classically educated artist who combined a love of photography with a fascination for surrealism and classicism. Born into a prosperous Hamburg merchant family, List began an apprenticeship at a Heidelberg coffee dealer in 1921 while studying literature and art history at Heidelberg University. During travels for the coffee business between 1924-28, the young List began to take photographs, almost without any pretensions to art. In 1930, though, his (…)
All About Herbert List

Marcin Owczarek
Nationality: Poland
Born: 1985
My art has always been focusing on condition of our globe and the condition of man. My antiutopian, critical photography is based on the anthropological research. I focus on exploring and interpreting the impact of: new technologies, bio-science, unconscious, fears, morals, social situations, behaviors, habits, rituals, biological changes, the use of animals, depression in urban envi...ronments, destruction of the soil, overpopulation, deforestation, universal famine and - (…)
All About Marcin Owczarek

Joe Vitone
Nationality: United States/Italy
Born: 1954
Joe Vitone is a documentary fine art photographer and educator living in Austin, Texas. His work consists of large format portraiture and landscape in the United States as well as panoramic and other views examining cultures abroad. He is Professor of Photocommunications at St. Edward's University in Austin, Texas where he has lived with his family since 1991. He teaches traditional as well as digital photography and electronic media. He has received a National Endowment for (…)
All About Joe Vitone

Lucien Clergue
Nationality: France
Born: 1934 - Died: 2014
Lucien Clergue was born in Arles. From the age of 7, he learned to play the violin. Several years later, his teacher revealed to him that he had nothing more to teach him. From a family of shopkeepers, he could not pursue further studies in a conservatory. In 1949, he learned the rudiments of photography. Four years later, at a corrida in Arles, he showed his photographs to Pablo Picasso who, though subdued, demanded to see others. Within a year and a half, young (…)
All About Lucien Clergue

Wiktoria Wojciechowska
Nationality: Poland
Born: 1991
Wiktoria Wojciechowska b. 1991 in Lublin, in the green East of Poland. Graduated in faculty of Media Art on Academy of Fine Arts in Warsaw. In her works she uses narration based on borderline of documentary and creation.

When she was 3 mother gave her scissors to make paper cuttings. At the age of 4 she decided to become a prima ballerina but at the same time she was sculpting little animals in plasticine - now her father thinks it was the beginning of the artistic (…)
All About Wiktoria Wojciechowska

Alireza Memariani
Nationality: Iran
Born: 1984
Graduate of Industrial Design from Art College 2009. He is a contemporary Iranian photographer and documentary living and working in Tehran. His work is influenced by the poverty that exists in Iranian societies. Much of his work came from these people's real lives. Cinema extras, miners, fish dryers and ... The core of Alireza's work is real. Originally a documentary photographer, it was several years before he started stage photography. He has been living and working (…)
All About Alireza Memariani

Maren Elize Klemp
Nationality: Norway
"I grew up in a small town outside of Oslo, and started photography when I was a teenager. My father bought me my first camera when I was seventeen, and I immediately knew that I wanted to become a photographer. Writing was one of my passions in this period of my life, but I also was searching for a way to express myself visually. I had no talent for either painting and drawing, so photography naturally became the right medium for me.

Unfortunately I dropped out (…)
All About Maren Elize Klemp