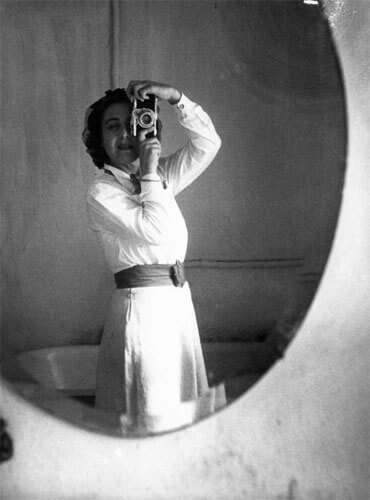 © Self Portrait 1941-1945
Country: France | Born: 1899 - Died: 1997
Anita Caracotchian was born in Ermont in Seine-et-Oise to a wealthy Armenian family. She spent her childhood being educated at home by different tutors and travelling with her family, gradually developing a passion for books and the sea. After moving to Paris, she concentrated on writing poems and the art of book binding. Her work got the attention of celebrities and she won different awards and prizes for her creativity in London, Paris, New York and Brussels.

In 1927, she married a diplomat, Marcel Conti, and started traveling around the world, exploring the seas, documenting and reporting what she saw and experimented. Spending time on the fishing boats for days and even months on certain occasions gave her a deeper understanding of the problematic faced by the fishermen. In between the two world war, she developed the technique of fishing maps apart from the already used navigational charts. For two years, from one vessel to another, she observed the French fishermen along the coast and Saharan Africa discovering fish species unknown in France. She published many scientific reports on the negative effects of industrial fishing and the different problems related to fishing practices.

From 1943 and approximately for 10 years, she studied in the Mauritian islands, Senegal, Guinea and Ivory Coast, the nature of the seabed, different fish species and their nutritional values in regards of protein deficiency for the local populations. Gradually, she developed better preservation techniques, fishing methods and installed artificial dens for further studies. She even founded an experimental fishery for sharks. She became more and more conscientious of the misuse of natural resources by the fishing industry and the major waste that could be prevented.

In 1971 she published L’Ocean, Les Betes et L’Homme, to denounce the disaster that men create and its effects on the oceans. Through many conferences and forums and for the rest of her life, she advocated for the betterment of the marine world.


Born in 1899, Anita Conti was recruited in 1935 by French Fisheries Authorities to conduct scientific experiments at sea and to assess fish resources. In 1941 she embarked on a trawler bound for Western Africa and spent the next ten years exploring the mangrove swamps between Senegal and the Ivory Coast, observing and assessing the techniques of traditional fishermen, meeting with local elders, establishing new fisheries... The hair-raising account of her attempts at catching the "Giants of the warm seas", such as sawfish and sharks, bears witness to her intrepid nature. Yet one can also feel her strong desire to contribute to a worthwhile cause. Exploring the swamps is not seen as an unilateral exploitation of African resources by Europeans : it is a genuine attempt at sharing knowledge.


Born just before the 20th century started, Anita Conti represents a piece from the past. During her teenage years, she developed a passion for books and sea and started photography in 1914. Indeed, for almost a hundred years, she has been gathering more than 40,000 photographies.

Anita was what we can call today an engaged pioneer. Recruited by French Fisheries Authorities to conduct scientific experiments at sea and to assess fish resources, she was the first french female oceanographer.

In 1939, she's been the first woman to embark in the service of the National French Navy, and, thus, became the first woman to work on a military ship in wartime. In charge of developing a new technique for fishing maps, she embarked on a trawler bound for western Africa in 1941. During 10 years, she explored the West African coasts, from the Mauritian islands to Senegal and from Guinea to Ivory Coast. She insured a resupply program for the population and the French army. Her goal was to save population from hunger and find nutritional solutions in regards of their protein deficiency.

During a decade, she travelled the world, explored the seas, documented and scientifically reported the negative effects of industrial fishing. "To be able to exploit the sea, you must enter into the sea" she used to say. Her African experience helped her to denounce the impacts of plundering the oceans and the major waste of marine resources. "Seas are under threat" she claimed. She tried to find fishing methods like fish farming to avoid overfishing.

Keiichi Tahara
Nationality: Japan
Born: 1951 - Died: 2017
Tahara was born in Kyoto. He learned photographic techniques at an early age from his grandfather, a professional photographer.

In 1972, he travelled Europe with Red Buddha Theatre as a lighting and visual technician. While in France, he encountered a sharp, harsh and piercing light that he had never experienced in Japan. Since then, he remained in Paris for next 30 years and started his career as a photographer.

His first series of work "Ville ((…)
All About Keiichi Tahara

Viviane Sassen
Nationality: Netherlands
Born: 1972
Viviane Sassen was born in 1972 in Amsterdam, and lives and works there. She first studied fashion design followed by photography at Hogeschool voor Kunsten Utrecht and fine art at Ateliers Arnhem. Sassen grew up in East Africa and has been taking photographs on the continent since her first return visit in 2002. Selected solo exhibitions have taken place at Forma in Milan (2009) and Foam in Amsterdam (2008). Sassen was one of six artists selected for the annual New (…)
All About Viviane Sassen

Ernie Luppi
Nationality: United States
Born: 1954
San Francisco native Ernie Luppi became involved with photography in 1973 when he started using his mother's Instamatic 126 camera that he and his brothers had given to her as a Christmas gift the previous year. During this time, Ernie was attending the City College of San Francisco and decided to switch his major to photography. The CCSF Photography Department offered one of the finest programs in the area and it helped Ernie unearth the creativity within him. To this day, (…)
All About Ernie Luppi

Josef Sudek
Nationality: Czech Republic
Born: 1896 - Died: 1976
Josef Sudek was a Czech photographer, best known for his photographs of Prague. Sudek was originally a bookbinder. During The First World War he was drafted into the Austro-Hungarian Army in 1915 and served on the Italian Front until he was wounded in the right arm in 1916. Although he had no experience with photography and was one-handed due to his amputation, he was given a camera. After the war he studied photography for two years in Prague under Jaromir Funke. His Army (…)
All About Josef Sudek

Mauricio Alejo
Nationality: Mexico
Born: 1969
Mauricio Alejo was born in Mexico City in 1969. He earned his Master of Art from New York University in 2002, as a Fulbright Grant recipient. In 2007, he was a resident artist at NUS Centre for the Arts in Singapore. He has received multiple awards and grants, including the New York Foundation for the Arts grant in 2008. His work is part of important collections such as Daros Latinoamérica Collection in Zürich . His work has been reviewed in important journals, (…)
All About Mauricio Alejo

Aneta Ivanova
Nationality: Bulgary
My name is Aneta Ivanova and I am 21-years old photographer born in Varna, Bulgaria. I started doing photography when I was 13 and have never stopped since then. I began by shooting experimental self-portraiture in my home, then discovered Fine art and fashion photography. I’m open for all kinds of projects and collaborations. (Source: anetaivanova.com)
All About Aneta Ivanova