Share:
Country: United States
Elisabeth Sunday has been photographing indigenous people across the African continent for the last 26 years. Using a flexible mirror she created for the purpose (and hand carries unaccompanied to some of the most remote and dangerous spots on earth), Sunday has created her own analog process that prefigured Photoshop that she calls "Mirror Photography". Her method of photographing her subjects emphasizes and enhances their grace, elongating the body and the folds of their garments, creating an impressionistic effect one might be used to seeing in painting but which is unexpected in a medium from which we often expect a more literal representation. The effect is closer to that of dance, in which the body has reshaped itself and learned to move in a way that proclaims and exaggerates all its best qualities, while momentarily silencing its flaws, and in which movement itself has an aesthetic, rather than merely practical, purpose. Typically Sunday captures an elongated vertical reflection, rushing and bleeding like a single expressive brush stroke. Although Sunday herself is never visible in the frame, she is as much actor as she is director within the drama of these photographs, as she strives to represent not so much the personal characteristics of her subjects, but an essential gesture that connects a given incarnation with the long history of the soul. In her Anima and Animus series, Sunday mediates on eternal masculine and feminine energies, using warlike Koro men and nomadic Tuareg women as subjects. The Anima women are hidden under flowing garments, slanting to left or right or reaching upward like dark flames against the steady white curve of a dune. The Animus figures rise like tough young trees or spears, rooted somewhere beneath the picture plane. Grace and violence here seem cast together in a solid block, As with so many of Elisabeth Sunday's figures, these seem composed of stone or bone more than living flesh. Elisabeth Sunday has shown in galleries and Museums the world over including the Cleveland Museum of Art, Centre cultural Calouste Gulbenkian, Paris, France, the African American Museum, Los Angeles; International Photography Biennial, Brecsia, Italy, UC Berkeley Art Museum; Salle d' Exposition, Arles, France, Le Maison de la Photographie, Aosta, Italy, Exploratorium Museum, San Francisco, CA Smithsonian Anakostia Museum, Center for African American History and Culture, Washington D.C. The Museum of Fine Arts, Houston, and The Los Angeles County Museum of Art. Her work is included in major collections: The Corcoran Art Gallery, The University Art Museum at Berkeley, The Cantor Art Center at Stanford University, The Los Angeles Museum of Art, The Museum of Fine Art-Houston, Le Bibliothčque Nationale de Paris, France, The San Francisco Museum of Art, and The Eastman Kodak Collection. Her private collectors include Graham Nash, Quincy Jones, Gloria Steinem, Linda Grey, Bill Cosby, Bonnie Raitt and Alice Walker.
Source Frank Pictures Gallery
Galleries:
Cordon Potts Gallery
Throckmorton Fine Art
Website:
elisabethsundayafrica.blogspot.com
Share:
Selected Book: 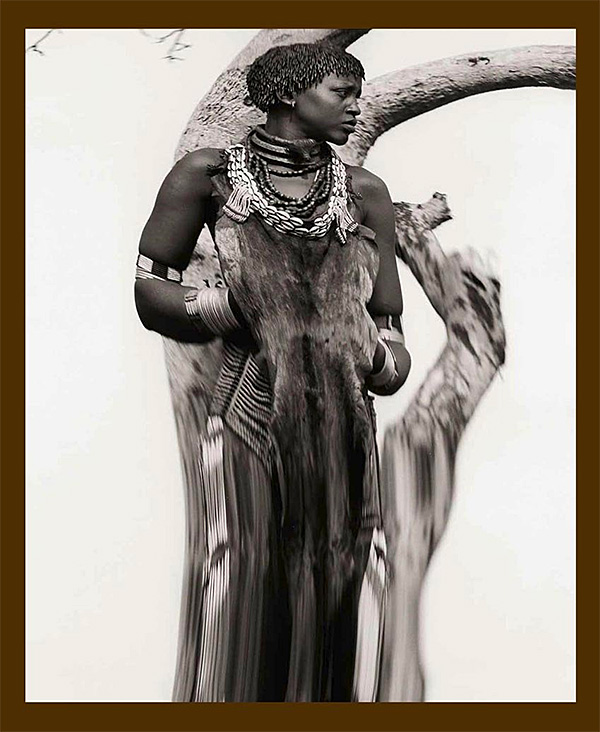 Grace
Author: Elisabeth Sunday
Publisher: Nazraeli Press
Year: 2012 - Pages: 60
For 26 years, Elisabeth Sunday has found her muse in Africa: a place of origins, devastating beauty, great troubles and unyielding expressions of life. She has traveled alone and lived among various original peoples who amidst a changing world, have clung tenaciously to traditional ways of life. From the hunter-gatherers dwelling in the primeval forests of the Congo Basin, to the nomadic tribes inhabiting the vast stretches of the Sahara Desert, Sunday's photographs reveal an interplay of invisible forces that connect her subjects with the world of nature. Utilizing a flexible mirror of her own design, Sunday photographs reflections that blend and dissolve the boundaries between her figures and their environment. Sunday's images express an intimacy with a corresponding strength derived from that relationship. She writes: "Mirror photography is much more than photographing a reflection, it produces a visual alchemy that combines the physical world with that of the great mystery . . . and captures some element that remains hidden in straight photography." Elisabeth Sunday's work has been widely exhibited and collected throughout the United States and abroad. "Grace", the artist's first monograph, opens with an eloquent and enlightening essay by Deborah Willis. The book is printed in an oversized (14 x 17 inch) format on uncoated art paper and bound in Japanese cloth. This first printing is limited to 1,000 copies.

Tariq Zaidi
Nationality: United Kingdom
In Jan 2014, Tariq Zaidi gave up a senior corporate position, to pursue his passion of capturing the dignity, purity and soul of people, within their environment. His work focuses on documenting social issues, inequality, endangered communities and traditions from around the world.

In Feb 2018, Tariq was awarded one of the top Premier Awards in POY75 (Pictures of the Year International Competition) - "(…)
All About Tariq Zaidi

Sally Mann
Nationality: United States
Born: 1951
Sally Mann was born in Lexington, Virginia in 1951. She has always remained close to her roots. She has photographed in the American South since the 1970s, producing series on portraiture, architecture, landscape and still life. She is perhaps best known for her intimate portraits of her family, her young children and her husband, and for her evocative and resonant landscape work in the American South. Her work has attracted controversy at times, but it has always been (…)
All About Sally Mann

Reisinger Zsuzsanna is a young Hungarian self-taught photographer who lives in Budapest.

Artist Statement:
"What drives me in my photographic work as in life, is the transience, the fragility of life itself. I try to capture this in images, frozen moments in time, taken now or in the past, but all becoming history at the very moment of capture. This vision, or rather this feeling, I try to convey to the viewer mainly through my (…)

All About Reisinger Zsuzsanna

Chen Jiagang
Nationality: China
Born: 1962
Born in 1962 in Chong Qing, Chen Jiagang began his career as a celebrated architect and real estate developer before making the transition to photography. In 1999, he was named one of twelve "Outstanding Young Architects" by the United Nations. Jiagang is the founder of the Sichuan Upriver Museum, the first private museum in China and the author of Third Front (Timezone 8 Limited, 2007). He currently lives and works in Beijing.

Mette Lampcov
Nationality: Denmark
Born: 1968
Mette Lampcov is a freelance documentary photographer from Denmark, based in Los Angeles. She studied fine art in London, England and after moving to the United States 13 years ago.
Her personal work includes projects about gender based violence and undocumented migrant workers in California. She is currently concentrating on a long term project "Water to Dust" documenting how climate change is affecting people and the environment around them in California.

Eugčne Atget
Nationality: France
Born: 1857 - Died: 1927
Jean-Eugčne-Auguste Atget was born 12 February 1857 in Libourne. His father, carriage builder Jean-Eugčne Atget, died in 1862, and his mother, Clara-Adeline Atget née Hourlier died shortly after. He was brought up by his maternal grandparents in Bordeaux and after finishing secondary education joined the merchant navy.

Atget moved to Paris in 1878. He failed the entrance exam for acting class but was admitted when he had a second try. Because he was drafted (…)
All About Eugčne Atget

Liliroze
Nationality: Switzerland/France
Born: 1972
Liliroze was born in Geneva in 1972. Her passion for photography began when she was young whilst discovering the images of her father. Only after having obtained a degree in econometry did she decide to consecrate her life to the art. She moved to Paris and became a diplomee of the ENS Louis Lumičre school in 1997. She assisted famous photographers at the beginning. Liliroze nourished her work in her travels, with the colors, shadows and people that happened into view or (…)
All About Liliroze

Ofir Barak
Nationality: Israel
My name is Ofir Barak, I'm a photographer based here in Jerusalem.

I can honestly say that I have been an artistic person all my life. I started out as a painter and was very passionate about it from a very early age. In 2013 I was lacking the motivation to create I was frustrated and I decided to put it aside and look for a new path to express myself through art.

I needed to travel somewhere and clear my mind and look for answers. In order to move (…)
All About Ofir Barak

Nieves Mingueza
Nationality: Spain
Nieves Mingueza is a lens-based, mixed media artist working with experimental photography, collage and text. Born in Spain, based in London. The often-cinematic themes in her projects have in common her fascination with old books, film stills, vintage cameras, poetry and minimal drawings. Ultimately, Nieves' work is about the foggy relationship between fiction and reality. In addition, she is currently exploring about immigration, mental health and human conflicts.