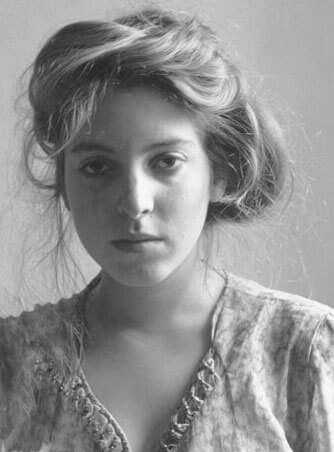 © self-portrait circa 1977
Country: United States | Born: 1958 - Died: 1981
Francesca Woodman was an American photographer best known for her black and white pictures featuring herself and female models. Many of her photographs show young women who are nude, blurred (due to movement and long exposure times), merging with their surroundings, or whose faces are obscured. Woodman attended public school in Boulder, Colorado, between 1963 and 1971 except for second grade, which she attended in Italy. She began high school in 1972 at the private Massachusetts boarding school Abbot Academy, where she began to develop her photographic skills and became interested in the art form. Abbot Academy merged with Phillips Academy in 1973; Woodman graduated from the public Boulder High School in 1975. Through 1975, she spent summers with her family in Italy. She spent her time in Italy in the Florentine countryside, where she lived on an old farm with her parents. Beginning in 1975, Woodman attended the Rhode Island School of Design (RISD) in Providence, Rhode Island. She studied in Rome between 1977 and 1978 in a RISD honors program. As she spoke fluent Italian, she was able to befriend Italian intellectuals and artists. She went back to Rhode Island in late 1978 to graduate from RISD. Woodman moved to New York City in 1979. After spending the summer of 1979 in Stanwood, Seattle whilst visiting her boyfriend at Pilchuck Glass School, she returned to New York "to make a career in photography." She sent portfolios of her work to fashion photographers, but "her solicitations did not lead anywhere. In the summer of 1980 she was an artist-in-residence at the MacDowell Colony in Peterborough, New Hampshire. In late 1980 Woodman became depressed due to the failure of her work to attract attention and to a broken relationship. She survived a suicide attempt, after which she lived with her parents in Manhattan. On January 19, 1981, she committed suicide by jumping out a loft window in New York. An acquaintance wrote, "things had been bad, there had been therapy, things had gotten better, guard had been let down." Her father has suggested that Woodman's suicide was related to an unsuccessful application for funding from the National Endowment for the Arts.
Source Wikipedia
Gallery:
Marian Goodman Gallery
Share:
Selected Book: 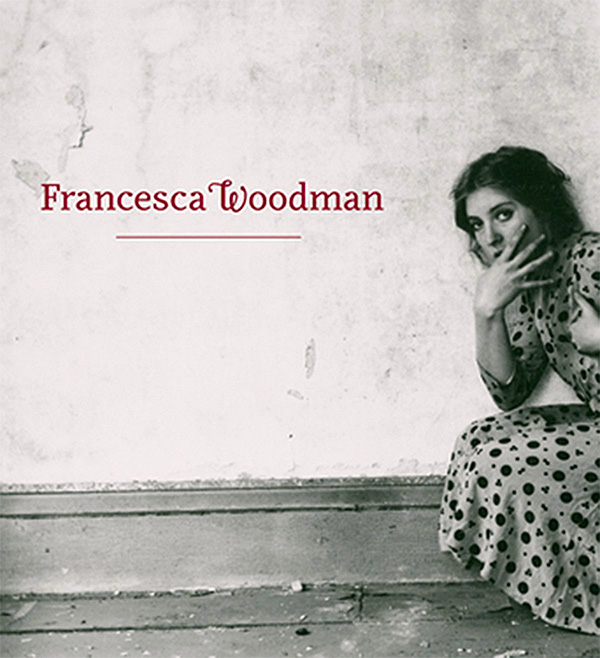 Woodman: Francesca Woodman
Author: Francesca Woodman
Publisher: D.A.P. San Francisco Museum of Modern Art
Year: 2011 - Pages: 224
Artists who arrive fully formed at a young age always dazzle, and Francesca Woodman was one of the most gifted and dazzling artist prodigies in recent history. In 1972, the 13-year-old Woodman made a black-and-white photograph of herself sitting at the far end of a sofa in her home in Boulder, Colorado. Her face is obscured by her hair, light radiates from an unseen source behind her out at the viewer through her right hand. This photograph typifies much of what would characterize Woodman's work to come: a semi-obscured female form merging with or flailing against a somewhat bare and often dilapidated interior. In an oeuvre of around 800 photographs made in just nine years, Woodman performed her own body against the textures of wallpaper, door frame, baths and couches, radically extending the Surrealist photography of Man Ray, Hans Bellmer and Claude Cahun and creating a mood and language all her own. In the 30 years since her untimely death, Woodman has gained a following among successive generations of artists and photographers, a testament to her work's undeniable immediacy and enduring appeal Amid a renewed intensification of interest in Francesca Woodman, this volume is published for a major touring exhibition of her photographs and films at the San Francisco Museum of Modern Art and the Guggenheim. Containing many previously unpublished photographs, it is the definitive Francesca Woodman monograph.

Gabriel Isak
Nationality: Sweden
Born: 1990
Gabriel Isak was born in 1990 in Huskvarna, Sweden. In 2016, he received his Bachelor of Fine Arts Degree in Photography at Academy of Art University in San Francisco, California. Isak has exhibited his work at solo exhibitions at The Cannery Gallery, San Francisco, California and his works have been included in various important exhibitions including "Acclimatize" at Museum of Modern Art, Stockholm, Sweden and "Culture Pop" at M Contemporary, Sydney, Australia. Isak lives (…)
All About Gabriel Isak

Antonio Aragón Renuncio
Nationality: Spain
Born: 1971
I have always loved photography... and tell stories. Browse faces, roads, lights... and shadows. I have no idea what that can last a lifetime -boredom prevails in too many hearts- that can happen within it. But what I know for sure, is the wonderful and perfect division of a second in magical fractions of light and color. And that in my world, in my mind it would be more accurate, it´s an argument more than enough to even let life steal. One "one hundred twenty-fifth of a (…)
All About Antonio Aragón Renuncio

Stefano Galli
Nationality: Italy
Born: 1981
Stefano Galli is an Italian photographer born in 1981.
After graduating at the University of Turin, with a BA in cinema, he moved to Copenhagen, Denmark, where he worked with director Lars Von Trier.

During these years he attended Fatamorgana, The Danish School of Art & Documentary Photography.

Fascinated with traveling and the discovery of new environments, Galli is currently working on a new series that belong to a trilogy started with 'Cars' and (…)
All About Stefano Galli

Alvaro Ybarra Zavala
Nationality: Spain
Born: 1979
Alvaro Ybarra Zavala, is based in Spain. He took up a career in photography while at university, aged 19, focussing on issues of social conflict. He has now exclusively joined the Reportage by Getty Images roster, having previously worked with Agence Vu (December 2005 - March 2009), and as a freelance photographer before that. His key bodies of work to date have included conflict coverage in Chechnya, Iraq, Afghanistan, Lebanon, Colombia, Democratic Republic of the Congo, (…)
All About Alvaro Ybarra Zavala

Margaret Watkins
Nationality: Canada
Born: 1884 - Died: 1969
Margaret Watkins (1884-1969) was born in Canada. Best known for art and advertising photography executed in New York in the 1920s, Watkins was active in the Clarence White school of photography and a participant in the shift from pictorialism to modernism. Her working life spanned a Victorian upbringing in Hamilton, Ontario, and the witnessing of the first Soviet Five-Year Plan. Watkins' modernism, which involved experimentation and a radical focus on form, transgressed (…)
All About Margaret Watkins

Fabian Muir
Nationality: Australia
Fabian Muir is an award-winning Australian photographer based in Sydney. The principal motivation behind his projects and practice is visual storytelling with a focus on humanist issues.

He is an Eddie Adams alumnus (USA) and represented by Michael Reid in Sydney and Berlin.

He speaks fluent German, French and Spanish, while his Russian sputters with the determination of a Lada on a rather steep incline.

His images have featured in major solo (…)
All About Fabian Muir

He joined Agence VU in 1996 and the following year received the Mosaďque Scholarship, the Kodak Young Photo-Reporter (…)
All About Rip Hopkins

Nicolas Thomas Moreno
Nationality: France
Born: 1986
Born in 1986 in Suresnes, I moved all over France during my youth as I followed my father's professional transfers. Middle School in Languedoc, part of High School in Jura and the rest in Besancon.

Back in Paris in 2010 after being accepted at the Icart School of Photography (in Levallois Perret), I obtained my diploma in 2013, finishing second with my series "Architectura".

Since then, I had several internships with architectural photographers and I (…)
All About Nicolas Thomas Moreno