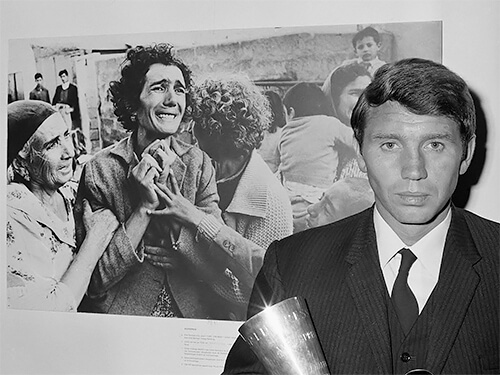 © Jac. de Nijs / Anefo, World Press Photo 1964
Country: United Kingdom | Born: 1935
Donald (Don) McCullin, FRPS CBE is an internationally known British photojournalist, particularly recognized for his war photography and images of urban strife. His career, which began in 1959, has specialised in examining the underside of society, and his photographs have depicted the unemployed, downtrodden and the impoverished. McCullin's period of National Service in the RAF saw him posted to the Canal Zone during the 1956 Suez Crisis, where he worked as a photographer's assistant. He failed to pass the written theory paper necessary to become a photographer in the RAF, and so spent his service in the darkroom. In 1959, a photograph he took of a local London gang was published in The Observer. Between 1966 and 1984, he worked as an overseas correspondent for the Sunday Times Magazine, recording ecological and man-made catastrophes such as war-zones, amongst them Biafra, in 1968 and victims of the African AIDS epidemic. His hard-hitting coverage of the Vietnam War and the Northern Ireland conflict is particularly highly regarded. He also took the photographs of Maryon Park in London which were used in Michelangelo Antonioni's film Blowup. In 1968, his Nikon camera stopped a bullet intended for him. In 1982 the British Government refused to grant McCullin a press pass to cover the Falklands War. At the time he believed it was because the Thatcher government felt his images might be too disturbing politically. However, it recently emerged that he was a victim of bureaucracy: he had been turned away simply because the Royal Navy had used up its quota of press passes. He is the author of a number of books, including The Palestinians (with Jonathan Dimbleby, 1980), Beirut: A City in Crisis (1983), and Don McCullin in Africa (2005). His book, Shaped by War (2010), was published to accompany a major retrospective exhibition at the Imperial War Museum North, Salford, England in 2010 and then at the Victoria Art Gallery, Bath and the Imperial War Museum, London. His most recent publication is Southern Frontiers: A Journey Across the Roman Empire, a poetic and contemplative study of selected Roman and pre-Roman ruins in North Africa and the Middle East. In later years, McCullin has turned to landscape and still-life works and taking commissioned portraits.
Source Wikipedia
Agency:
Contact Press Images
Gallery:
Fahey/Klein Gallery
Share:
Selected Video:
Selected Books: 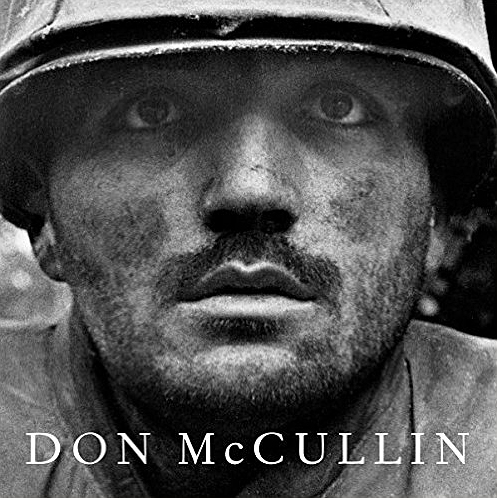 Don McCullin
Author: Mark Holborn, Harold Evans, Susan Sontag, Don McCullin
Publisher: Aperture
Year: 2015 - Pages: 352
First published in 2001, this retrospective survey offers both an examination of Don McCullin's photographic career as well as a record of half a century of international conflict. Coinciding with the photographer's eightieth birthday, this expanded edition of Don McCullin serves as fitting homage to a photographer who dedicated his life to the front line in order to deliver compassionate visual testament to human suffering. With texts by Mark Holborn, Harold Evans and Susan Sontag, and photographs taken by McCullin in England, Cyprus, Vietnam, the Congo, Biafra, Northern Ireland, Cambodia, Bangladesh and Beirut, this is an essential volume on one of the legendary photographers of the 20th century. "I have long admired Don McCullin's heroic journey through some of the most appalling zones of suffering in the last third of the 20th century," Sontag wrote in her essay. "We now have a vast repository of images that make it harder to preserve such moral defectiveness. Let the atrocious images haunt us Seeing reality in the form of an image cannot be more than an invitation to pay attention, to reflect, to learn, to examine the rationalizations for mass suffering offered by established powers."

British photographer Don McCullin (born 1935) began his professional photographic career in 1959, and dedicated himself to photographing war, conflict, disease and poverty around the world, turning in his later years to landscape and still-life photography in his native England. 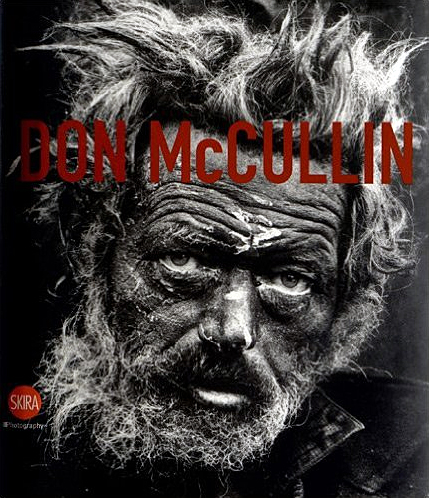 Don McCullin: The Impossible Peace
Author: Don McCullin, Sandro Parmiggiani
Publisher: Skira
Year: 2012 - Pages: 272
An exhibition catalog that features an impressive retrospective, covering the last fifty years in chronological order. Don McCullin (born 1935, London) is one of the most important photographers of our time. For more than fifty years, his uncompromising black-and-white photographs have shaped our awareness and understanding of modern conflict and its consequences. His images tell the remarkable story of his life and work, including his most famous assignments in Berlin, Vietnam, Cambodia, Biafra, Bangladesh, and the Middle East. The Winner of the Warsaw Gold Medal and the World Press Photographer Award, he was awarded the ICP Cornell Capa Award in 2006. Key periods in McCullin’s life, including his early experiences of evacuation and the Blitz, his commissions from Berlin in 1961 and Cyprus in 1964, and his most famous work for the Sunday Times are here explored alongside more recent projects with Christian Aid, his photographs of last tribes in the Omo River Valley, South Kenya, and Irian Jaya, New Guinea, and, in the last few years, those of still-life and English landscapes at his home in Somerset. A photographic journey across the ruins and landscapes of the boundaries of the Roman Empire completes the volume. 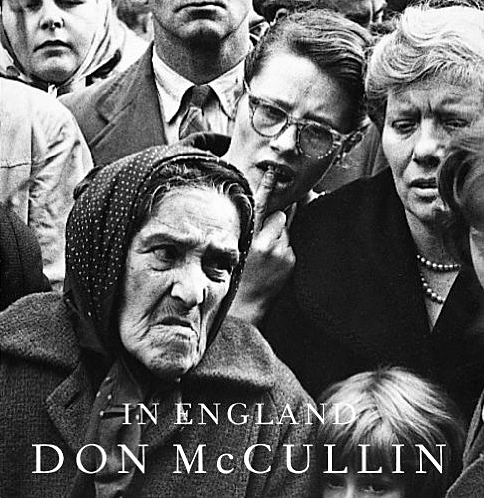 Don McCullin: In England
Author: Don McCullin
Publisher: Random House UK
Year: 2008 - Pages: 252
Don McCullin’s view of England is rooted in two worlds—his wartime childhood, and his youth in 1950s Finsbury Park. His first published photograph was a picture of a gang from his neighborhood, which appeared in a newspaper after a local murder. McCullin always balanced his anger at the unacceptable face of the nation with tenderness or compassion, and in this collection, he envisions his home country with its perpetual social gulf between the affluent and the desperate in mind. He continues in the same black and white tradition as he did between foreign assignments for the Sunday Times in the 1960s and 1970s, when his view of a deprived Britain seemed as dark as the conflict zones from which he had just escaped. This book marks his return to the cities and landscape he knew as a young photographer, adding wry humor to his famed lyricism. At a time when we might believe the world has changed beyond our imagination, McCullin shows us a view of England where the line between the wealthy and the impoverished is as defined as ever, the nation as a whole as absurd as it is tragic. 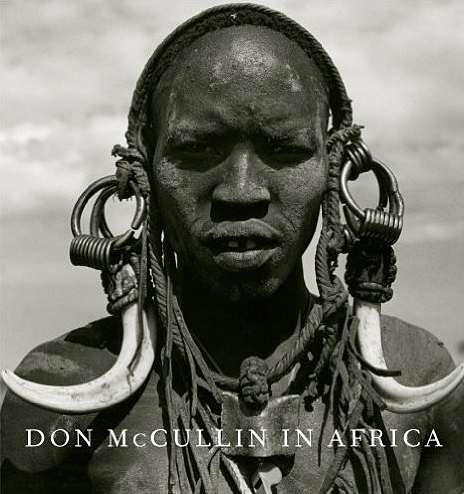 Don McCullin in Africa
Author: Don McCullin
Publisher: Random House
Year: 2005 - Pages: 176
Don McCullin is one of the great photojournalists of our times. In recent years, his travels have taken him to some of the world’s remotest regions, and his skill and empathy have gained him access to tribes on the edge of civilization. Over the last two years, he has traveled from Addis Ababa in Ethiopia to the valley of the Omo River leading to the border with Sudan. There he entered the tribal lands of the Suma, the Gheleb, the Bume, the Erbore, the Bene, the Bodi, the Karo, the Hamar, and the Mursi. Beyond dignity, there is a heroic aspect to his subjects; we, the viewers, can be amazed by their strength and beauty, and all the more so because McCullin’s compassionate artistry enables us to understand their vulnerability.

Mo Kwang
Nationality: Korea
Born: 1979
Kwang Mo was formally trained in photography at the Kaywon School of Art and Design in Korea. He was awarded the 13th Young Photographer’s Prize during the Daegu Photo Biennale and a place in the SeMA (Selected Emerging Artists) Support Program from Seoul Art Museum in 2010. In 2010, Mo was also nominated for the Prix Pictet award in France. In his sepia-tinted photographs selected for “New Photography in Korea II”, Kwang Mo blurs the line that separates fantasy and reality. (…)
All About Mo Kwang

Steve McCurry
Nationality: United States
Born: 1950
Steve McCurry has been a one of the most iconic voices in contemporary photography for more than 30 years, with scores of magazine and book covers, over a dozen books, and countless exhibitions around the world to his name. Born in a suburb of Philadelphia, Pennsylvania; McCurry studied film at Pennsylvania State University, before going on to work for a local newspaper. After several years of freelance work, McCurry made his first of what would become many trips to (…)
All About Steve McCurry

Richard Le Manz
Nationality: Spain
Born: 1971
For this engineer and self-taught photographer born in Spain in 1971, photography is equally essential both, to communicate the beauty and to reflect on the complex socio-environmental issues, which threaten our planet.

He started in photography making landscape photography, but depicting nature is not enough. Pictures of great landscapes may not be the best way to move consciences and change our values and morals. His photography becomes what some journalist (…)
All About Richard Le Manz

Tim Franco
Nationality: France/Poland
Tim Franco is French-Polish freelance photographer based in Shanghai. Since he first came to China in 2005, Tim Franco got fascinated by the fast social and urban transformation that chinese cities where going through. He has spent some time documenting those growth through urban photography but also by studying social changes, such at the underground art world and the social problems related to the evolutions of the cities. Among his projects is a comprehensive (…)
All About Tim Franco

Klavdij Sluban
Nationality: France
Born: 1963
Winner of the European Publishers Award for Photography 2009, of the Leica Prize (2004) and of the Niépce Prize (2000), main French prize in photography, Klavdij Sluban is a French photographer of Slovenian origin born in Paris in 1963. He develops a rigorous and coherent body of work, nourished by literature, never inspired by immediate and sensational current affairs, making him one of the most interesting photographers of his generation. The Balkans, the Black Sea, the (…)
All About Klavdij Sluban

Svetlin Yosifov
Nationality: Bulgary
I was born in Bulgaria, and I had the privilege of living in this beautiful country all my life. My employment is in a private sports club, focused on extreme sports, which involves a lot of travelling and keeps my life dynamic and interesting. Apart from this, I love travelling abroad and do this once a year for a period of two months. I always associate these trips with diving in the unknown, meeting new people and experiencing something new. My adventurous spirit is my (…)
All About Svetlin Yosifov

Gautam Narang
Nationality: United Kingdom
Born: 1984
I found photography by mistake, when doing my GCSE, I was sitting in the study room, then heard a teacher describe the subjects they taught at the school. As he was going through the subjects, he mentioned photography. I thought to myself was this a subject? Photography! It's so easy, all you do is click (How, wrong I was, how very wrong) *sigh*. As a child I used to play around with cameras. I always looked through them as was interested In them. So I sat in the lesson and (…)
All About Gautam Narang

John Engstead
Nationality: United States
Born: 1909 - Died: 1983
John Engstead (22 September 1909 in California - 15 April 1983 in West Hollywood, California) was an American photographer. Engstead began his career in 1926, when he was hired as an office boy by Paramount Pictures' head of studio publicity, Harold Harley. In 1927, Engstead pleased his boss by arranging a photo session for actress Clara Bow with photographer Otto Dyer using an outdoor setting which was unusual at that time. Engstead's creative direction of photographs (…)
All About John Engstead