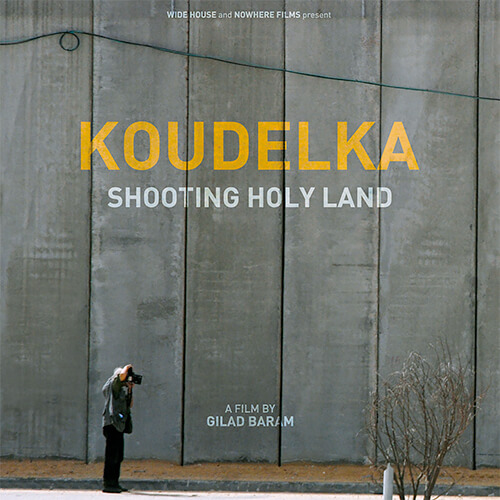 A unique edition of the award-winning documentary, Koudelka Shooting Holy Land on acclaimed Czech photographer, Josef Koudelka (Magnum Photos), will be released on Blu-Ray and DVD and offered for online rent. Including over 60 minutes of never-before-seen additional material - rare interviews with Koudelka in his Paris studio, edit-room-floor scenes released for the first time, and a Q&A with Koudelka and director Baram filmed in front of a live audience.

ABOUT THE DISC EDITION: DVD & BLU-RAY

In October 2015, the feature-length documentary, Koudelka Shooting Holy Land premiered and, for the first time ever, shed light on the mystery of Josef Koudelka. The film offered an intimate look into the creative process of Koudelka that excited and fascinated photographers and photography enthusiasts around the world.

Now, following four years of non-stop touring in more than 50 countries, showing in major film and photography festivals, in museums, galleries and cultural centres, the film will finally become available to the public on disc and online.

Josef Koudelka long ago entered the pantheon of photography with an astounding body-of-work including the series Invasion '68, Gypsies, Exiles and Chaos, which has been a source of inspiration for generations of photographers worldwide.

Yet very little was known about the 81 year old Czech photographer and his creative process. The legendary Magnum Photos member has for decades kept out of the public eye and has led a secluded lifestyle, dedicating himself to photography in the most absolute way possible. Koudelka Shooting Holy Land - The Disc Edition presents the most comprehensive visual documentation of Josef Koudelka to date.

I grew up behind the wall. For me it was the prison, I was in the cage. So, of course I didn't like the Wall, but in the same time it is pretty spectacular this Wall.
- Josef Koudelka (from Koudelka Shooting Holy Land)

KOUDELKA SHOOTING HOLY LAND is a unique and intimate look into the creative process of Josef Koudelka, one of photography's greatest living masters. Israeli-born filmmaker, Gilad Baram, follows Koudelka on his photographic journey through Israel and Palestine as he searches for the elusive moment in which a photograph emerges.

Czech Photographer Josef Koudelka grew up behind the Iron Curtain and always wanted to know what was on the other side. In 2008, 40 years after capturing the iconic images of the Soviet invasion of Prague, the legendary Magnum Photos photographer arrives in Israel and Palestine.* On first seeing the nine-meter-high wall built by Israel in the West Bank, Koudelka is deeply shaken and embarks on a four-year project in the region which will confront him once again with the harsh reality of violence and conflict.

Filmmaker Gilad Baram, at the time a young photography student, was assigned to Koudelka as an assistant. Soon after they set out on their journey through the Holy Land, Baram began documenting the master photographer. In each enigmatic and visually spectacular location — soon to become a new Koudelka photo—Baram's camera reveals Koudelka's method of working, his perception of the places he is documenting, and the people he encounters.

A fascinating dialogue emerges between Baram's cinematography and Koudelka's still photography as Baram places the photographer in his own breathtaking compositions. Their austere images of a landscape carved up by concrete walls and barbed wire reveal the tragic absurdity of the infamous conflict.

* Koudelka first arrived in Israel and Palestine as one of twelve internationally acclaimed photographers invited to participate in This Place, a photographic group project initiated by Frédéric Brenner. Following his participation in the project, Koudelka created the book Wall - Israeli and Palestinian Landscape 2008-2012 (2013, Aperture Foundation, Éditions Xavier Barral).

** The Disc Edition was realised thanks to hundreds of backers from over thirty countries who supported a successful Crowdfunding campaign on Kickstarter.

Koudelka belongs to an endangered species of photographer: the mythic nomad figure forever on the lookout for the next unique image. For more than 50 years he has dedicated his life to photography, waking up to his frames in the mornings and falling asleep with them at night. At the same time, it is these unforgettable images that compose the unique mosaic of his character.

The first time I saw Josef Koudelka in action I was hypnotized. When the 72 year old photographer lifted the viewfinder to his eye, he was transformed; his entire being was now centered on the meeting point of eye and camera. From that moment I knew I had to try and understand the obsessive gaze-driven force at work behind each click of the button.

Koudelka Shooting Holy Land emerged out of the rare encounter between a keen young photographer and a world-renowned master of photography. Over five years I realized that in order to portray this unique artist and his singular creative process I would have to carefully learn and eventually adopt his way of seeing. With each visit he made to my native country I studied his movements, the places and situations that captured his attention, the patience and dedication needed to crystallize the single moment. Gradually I learned how to draw the frame around Koudelka. That is, I learned how to look.

All About Josef Koudelka

Josef Koudelka (b. 1938, Moravia, Czech Republic) received a degree in engineering from the Technical University of Prague in 1961. While working as an aeronautical engineer in Prague and Bratislava in the early 1960s, he obtained a Rolleiflex camera and began photographing stage productions for theater magazines. Koudelka later left the theater to pursue the documentation of Gypsy life and culture in Romania, Slovakia, and Western Europe, turning to photography full-time in 1967.

In 1968, just two days after his return from Romania, Koudelka photographed the Soviet invasion of Prague and the Czechs' non-violent resistance. With the assistance of art historian and museum director Anna Farova, his negatives were smuggled out of Prague and published by Magnum Photos in New York under the initials P.P. (Prague Photographer) to avoid reprisals against Koudelka's family. Koudelka was anonymously awarded the Overseas Press Club's Robert Capa Gold Medal for these photographs in 1969, but did not publicly acknowledge authorship of them until 1985, following the death of his father.

Koudelka left Czechoslovakia in 1970 and sought political asylum in England, where he would live for more than a decade. He joined Magnum Photos Agency in 1971, continuing to travel in Europe and photograph its landscape. Koudelka became a French citizen in 1987 and returned to Czechoslovakia in 1991 - following an absence of over two decades - to produce Black Triangle, a project documenting the devastation caused by French coal mining in the foothills of the Ore Mountains.

Koudelka is the recipient of numerous awards, including two grants from the Arts Council of Great Britain (1973, 1976), the Prix Nadar, France (1978), the United States National Endowment for the Arts Photography Grant (1980), the Erna and Victor Hasselblad Foundation Photography Prize, Sweden (1992), and the Cornell Capa Infinity Award (2004).

Koudelka lives and works in Paris and Prague.

All about Gilad Baram

Gilad Baram is a photographer and documentary filmmaker, born in Israel and based in Berlin. Baram's work has won scholarships and awards and has been exhibited in numerous museums, galleries and festivals worldwide. Koudelka Shooting Holy Land is Baram's directorial debut. His second film, The Disappeared (2018, with Adam Kaplan), premiered at Berlinale - the Berlin International Film Festival, was nominated for awards at CPH:DOX, Copenhagen; BAFICI, Buenos-Aires; Docaviv, Tel-Aviv; Lima Independiente, Lima, and recently featured First Look Film Festival at MoMI, NYC; Videonale17, Bonn and FoR'19 at ICA, London.