Gordon Parks: The Flàvio Story at the Getty 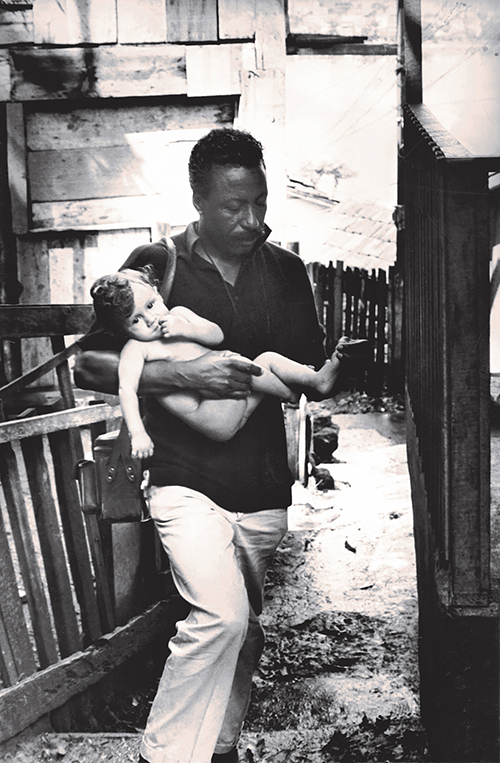 The J. Paul Getty Museum announces an exhibition of photographs by celebrated artist Gordon Parks (American, 1912-2006). On view July 9-November 10, 2019 at the J. Paul Getty Museum, Getty Center, Gordon Parks: The Flávio Story explores one of the most important photo essays Parks produced for Life magazine and traces how its publication prompted an extraordinary sequence of events over several decades. The exhibition is co-organized by the Getty and the Ryerson Image Centre in Toronto, Canada in partnership with Instituto Moreira Salles, Brazil, and The Gordon Parks Foundation, New York.

Gordon Parks' photographs chronicling social justice, civil rights, and the African-American experience in the United States are both a vital historical document and a compelling body of artistic work, says Timothy Potts, director of the J. Paul Getty Museum. And, of all his varied projects, Parks considered the photographs of Flávio among his most important achievements. The great impact that it had, and still has today, can only be appreciated by presenting these photographs in their full socio-political context, which is what this exhibition does for the first time.

An accomplished filmmaker, composer, writer and poet, Parks is best remembered for his prolific career as a photographer. He became the first African-American photographer on staff at Life magazine, where he covered subjects ranging from fashion to social injustice. In 1961 the magazine sent him to Brazil with a specific assignment: to document poverty in Rio de Janeiro for a special series on Latin America. Told to photograph the hardworking father of a large, impoverished household, Parks all but disregarded these instructions and turned his attention instead to one resident in particular—an industrious, severely asthmatic twelve-year-old boy named Flávio da Silva who lived in Catacumba, one of Rio's working class neighborhoods known as favelas. 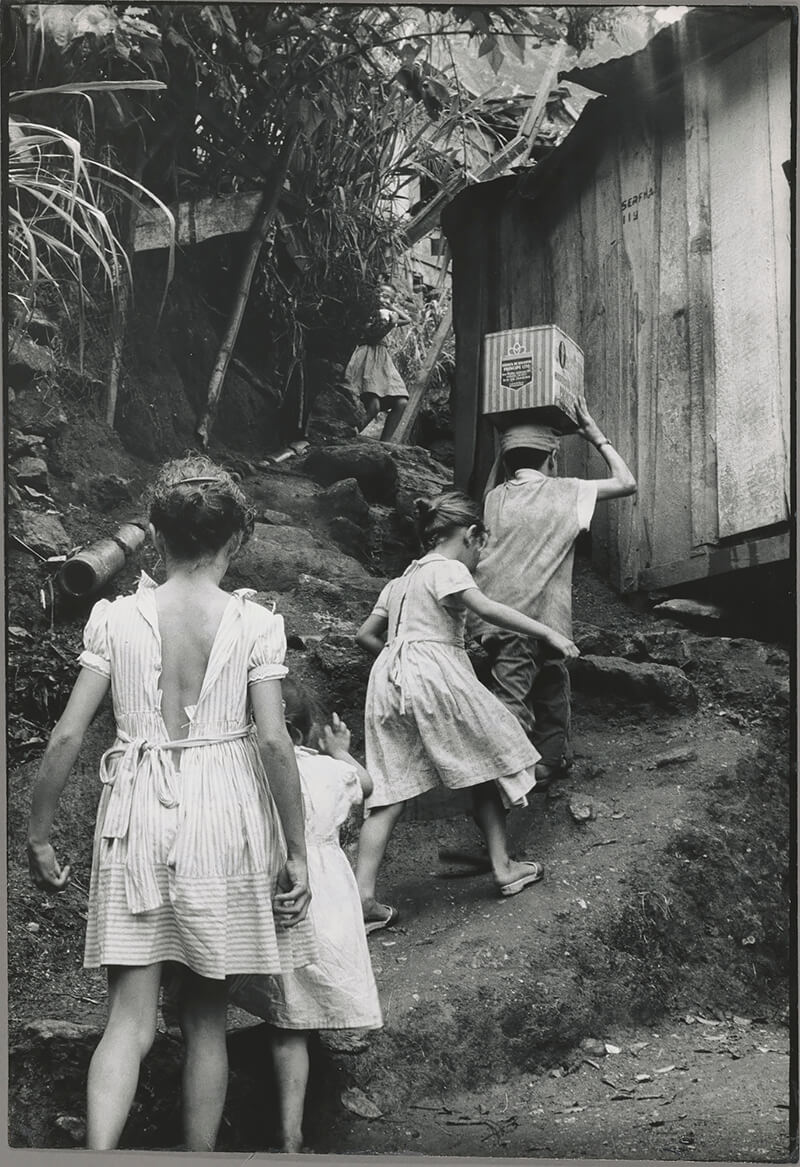 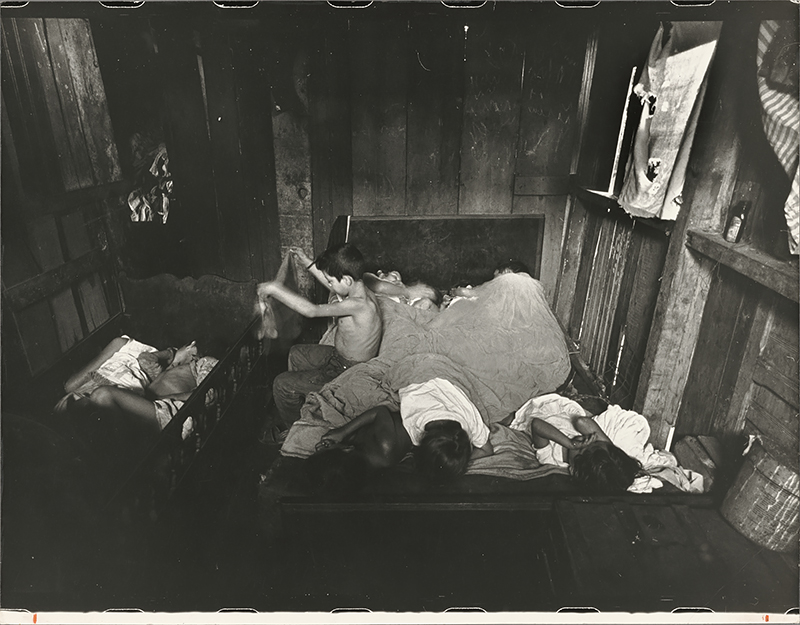 Over the course of several weeks Parks photographed Flávio as he performed household chores and entertained his seven brothers and sisters—daily activities that were often interrupted by debilitating asthma attacks. Having himself grown up in abject poverty in Kansas, Parks felt deep sympathy for his subject and forged an emotional bond with him. Ultimately Parks advocated for a comprehensive photo essay dedicated to Flávio's story in the pages of Life; editors responded by publishing a twelve-page piece, titled Freedom's Fearful Foe: Poverty, in June 1961. The exhibition will include images from this spread, as well as outtakes from the assignment.

Within days of its publication in the magazine, Flávio's story emerged as a blockbuster. Moved by Parks' heartbreaking coverage, Life's readers wrote thousands of letters and spontaneously donated money to support the da Silva family and the revitalization of the favela. Upon seeing the images, the president of the Children's Asthma Research Institute and Hospital (CARIH) in Denver, Colorado offered to treat Flávio as a patient, free of charge. In July 1961, Life sent Parks back to Rio as part of the magazine's follow-up efforts. After helping to move the da Silva family from Catacumba, Parks accompanied Flávio from Rio to the United States. For the next two years Flávio lived and received treatment at CARIH but spent most weekends with a Portugeuse-speaking host family who introduced him to various aspects of American culture.

Anticipating a compelling story about Flávio's medical progress and experience in the U.S., Life assigned a local photographer, Hikaru Carl Iwasaki, to document the boy's arrival in Denver, admission to the hospital, and acclimation at school. A selection of these images will be on view in the exhibition, including some that Life never published, alongside snapshots made by Flávio's host father in Denver, José Gonçalves. In spite of his wish to remain in the United States, Flávio was sent back to Brazil in 1963. Now 70 years old, he has never returned to the United States. 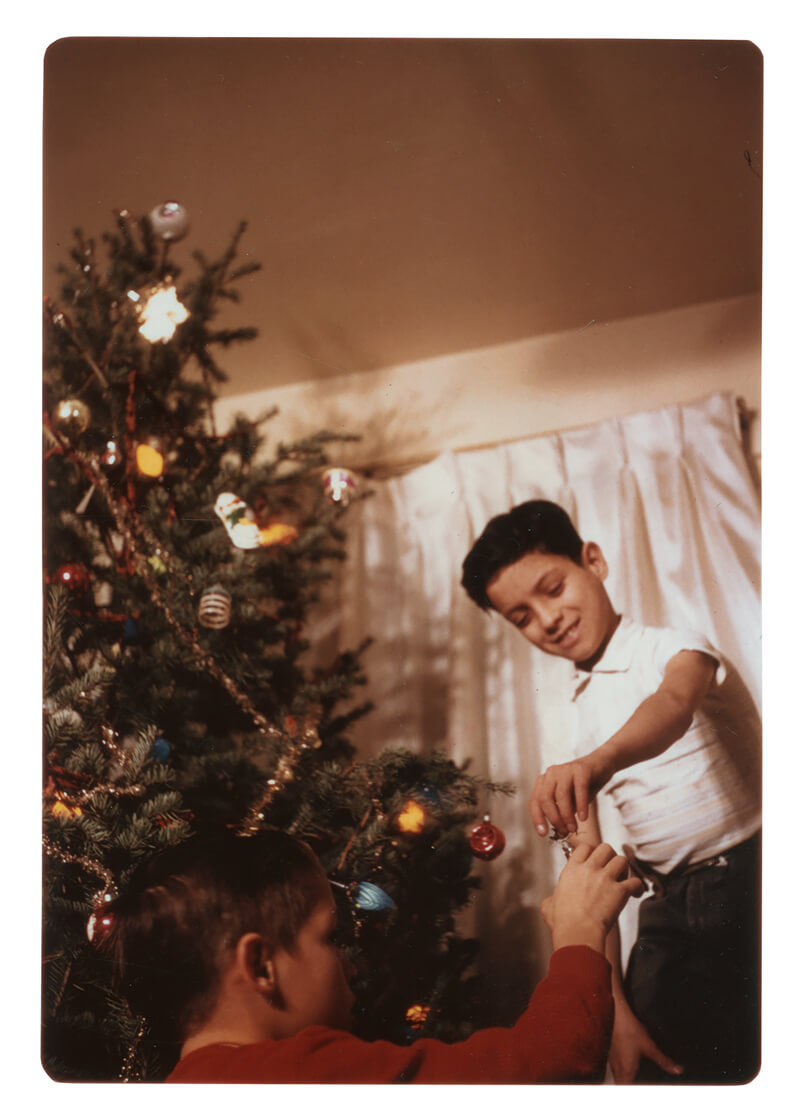 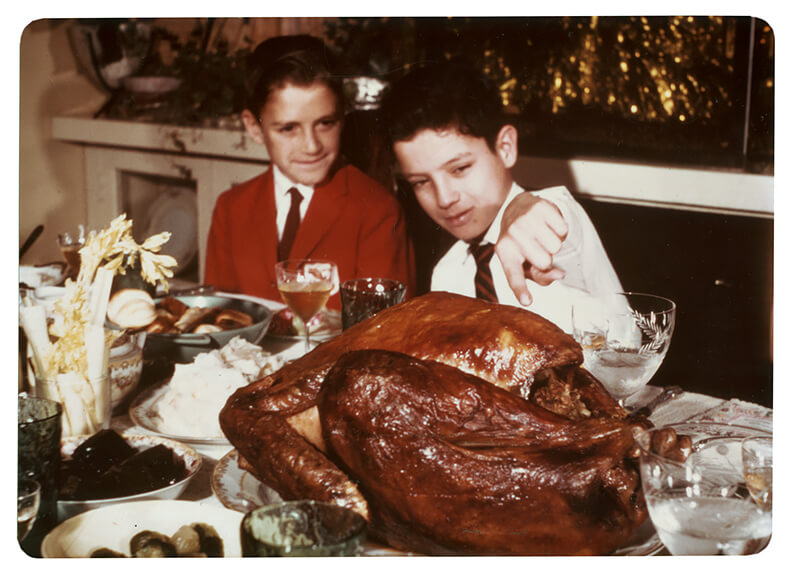 Thanksgiving at the Gonçalves home–Flávio da Silva's very first turkey dinner © José Gonçalves/The Gordon Parks Foundation When published in 1961, Freedom's Fearful Foe: Poverty was also met with criticism, particularly within the Brazilian press. Outraged and determined to retaliate against Life's negative portrayal of the Catacumba favela and its residents, the Brazilian magazine O Cruzeiro sent staff photographer Henri Ballot to report on poverty in New York, where Life was headquartered. While exploring the Lower East Side in Manhattan, Ballot documented an immigrant family from Puerto Rico—Felix and Esther Gonzalez and their children—who lived in a derelict one-bedroom apartment. Arguing that poverty was equally endemic in the United States, O Cruzeiro published Ballot's photographs in October 1961 in the photo essay Nôvo recorde americano: Miséria (New American Record: Misery). Photographs from this story, as well as from an investigative exposé on Parks' reportage also published in O Cruzeiro in 1961, will be on view in the exhibition. 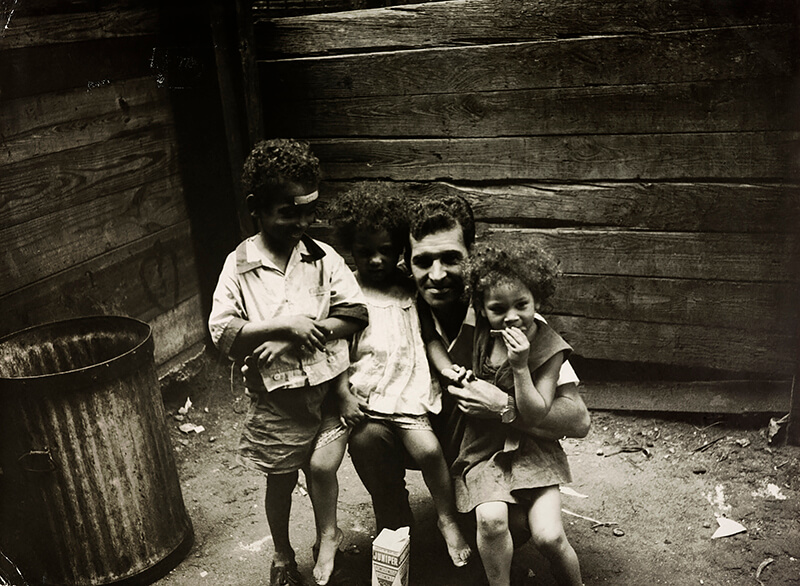 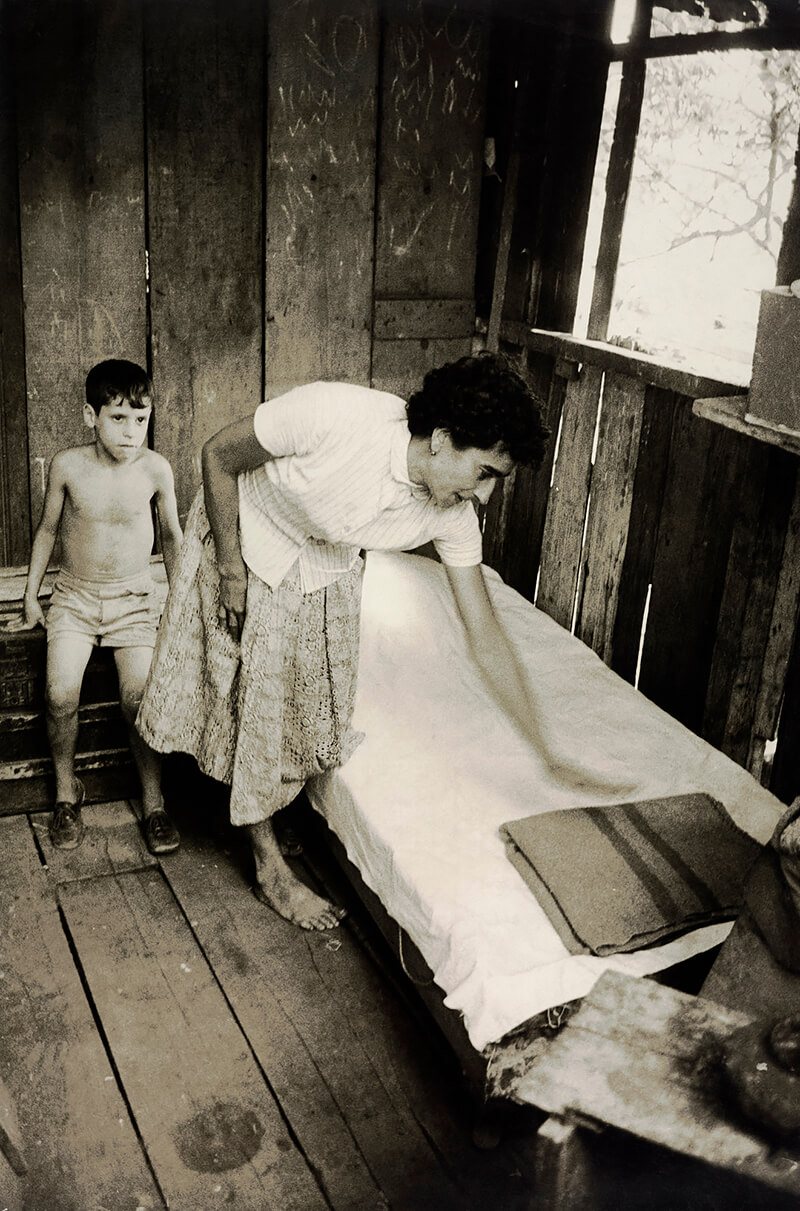 Aracy, a neighbor of the da Silva family, pointing out where the photographs for Gordon Parks’ report were taken, Catacumba Hill, Rio de Janeiro, Brazil, 1961 © Henri Ballot/Instituto Moreira Salles collection Over the years Parks periodically returned to Flávio as a subject. In 1976 he published Flávio, which recounted and updated the story through words and pictures. In the book's introduction, Parks provided insight into his own conflicted engagement with certain photographic assignments that focused on people like the da Silva family, acknowledging that he was perhaps playing God by digging deeper and deeper into the privacy of these lives, hoping . . . to reshape their destinies into something much better. Following this admission, Parks returned to Brazil only once in the 1990s; it marked the last time Parks and Flávio saw each other prior to Parks' death in 2006.

Parks regarded poverty as 'the most savage of all human afflictions,' in no small part because he was born into destitution, says Amanda Maddox, co-curator of the exhibition and an associate curator at the Getty Museum. As a photographer he consciously wielded his camera as a weapon—his chosen term—in an attempt to combat economic and racial inequality. Viewed in this context, his documentation of Flávio da Silva—for Life and beyond—reveals the complexity of his empathetic approach and the inherent difficulties of representing someone else's personal story—a story that resonated with many people over many years—in any form.

In addition to more than 100 photographs, the exhibition will also include original issues of Life that featured Flávio's story, previously unseen ephemera related to Flávio's time in Denver, and private memos, correspondence, and records held by Life and Parks. 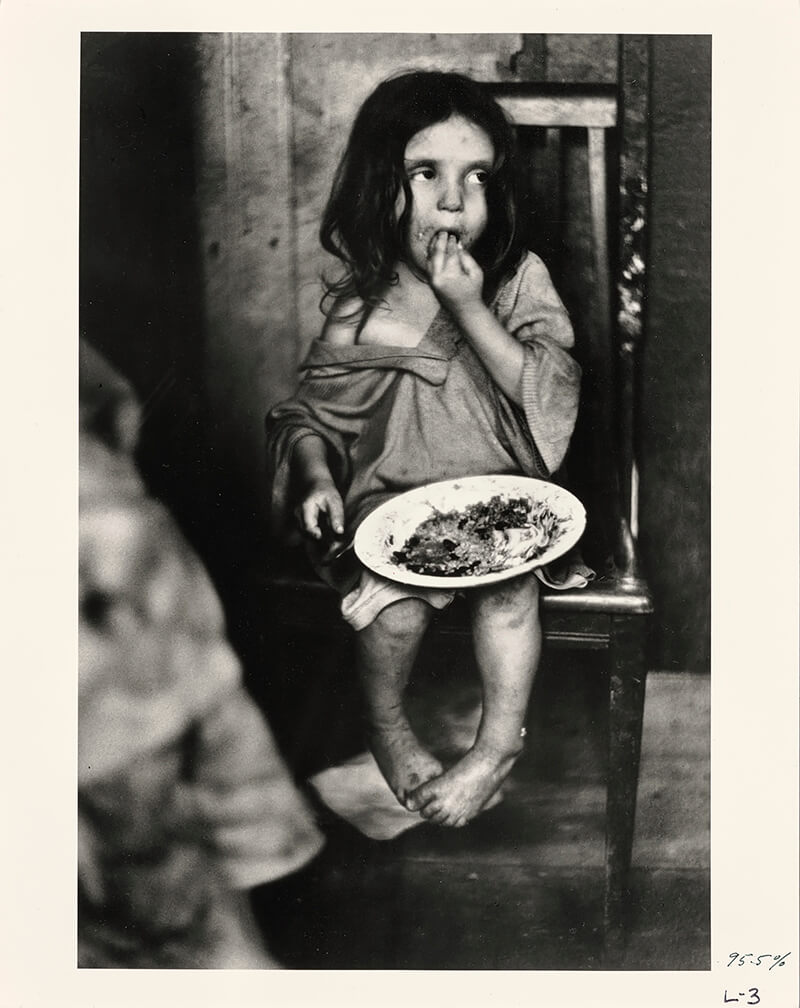 Gordon Parks was born into poverty and segregation in Fort Scott, Kansas, in 1912. After working as a pianist and railcar porter, among other odd jobs, Parks bought a camera at a pawnshop and embarked on a career as a photographer. Employed briefly by the Farm Security Administration, Parks was eventually hired as the first African-American staff photographer at Life. Throughout his storied tenure at the magazine, which began in 1948, Parks contributed numerous photo essays on such topics as racial discrimination or social and political injustice that managed to affect large and diverse audiences yet remained tied to his personal history. Evolving into a modern-day Renaissance man, Parks found success as a film director, author, and composer of music. The first African-American director to helm a major motion picture in Hollywood, he helped launch the blaxploitation genre with the hit movie Shaft (1971). Parks wrote numerous memoirs, novels, and books of poetry, and received many awards, including the U.S. National Medal of Arts, and more than 50 honorary degrees. He died in 2006.