A Brief History of Photography 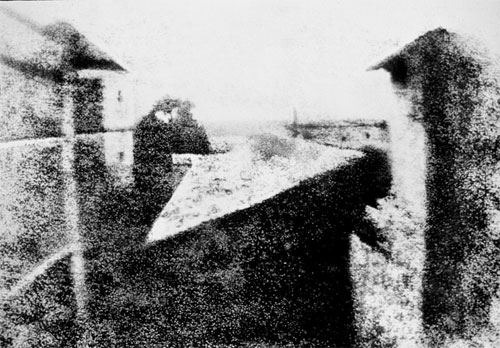 Lets take a step back in time and list the most important dates in the history of photography.

A long time ago: It all began with the Camera Obscura (which is Latin for the Dark Room). It is believed that Aristote (384-322 BC), the Arabian scholar Hassan ibn Hassan (965-1038) and Leonardo Da Vinci (1452-1519) already knew its principles. Camera Obscura is essentially a dark, closed space (room or box) with a hole on one side of it. The light passes through the hole and strikes a surface inside, where it is reproduced, upside-down, but with color and perspective preserved. It helped painters during the Renaissance to draw lines over the projected images on canvas.

1816: We know from a letter to his sister in law that Joseph Nicéphore Niépce (French inventor 1765-1833) succeeded in making negative images but that they disappeared quickly with exposure to light.

1826: Is the date of the earliest surviving photograph from nature using a camera obscura by Joseph Nicéphore Niépce. (Photo above)

1839: Louis Daguerre develops the process he calls Daguerréotype after himself. Using the camera obscura, he made the plate inside the camera light sensitive by fumes from iodine crystals. Because Niépce was at the beginning of the research, Daguerre and Niépce's son both received money for their invention by the French government.
- John Herschel makes the first glass negative.
- W. H. Fox Talbot makes the Calotype process public

1888: George Eastman (American innovator 1854-1932) sells the Kodak n°1 box camera, the first easy-to-use camera. It is introduced with the slogan You press the button, we do the rest.

1975: Steven Sasson (engineer at Eastman Kodak) invents and builts the first electronic camera using a charge-coupled device image sensor (digital camera). It is a prototype with 100x100 pixels in black and white.
Stay up-to-date  with call for entries, deadlines and other news about exhibitions, galleries, publications, & special events.
Advertisement