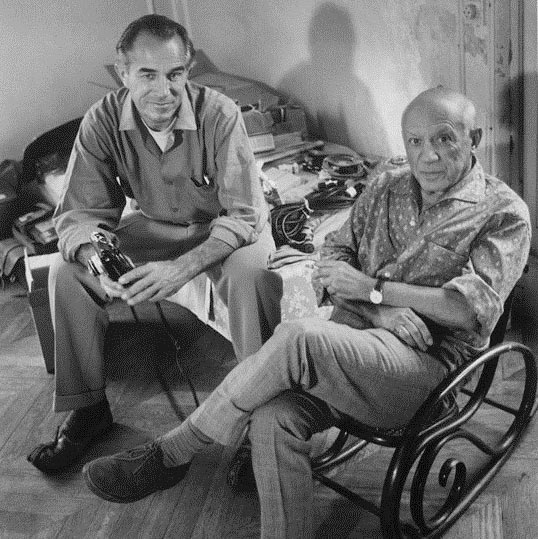 Pablo Picasso was the most photographed artist of his time, especially during the second half of his life when his reputation had become plane- tary. Some will see complicity, others connivance. Great photographers such as Man Ray, Brassaï, Lee Miller, Willy Ronis, Robert Doisneau, Robert Capa and Henri Cartier-Bresson made numerous portraits of the artist, not to mention Dora Maar, his companion, whose prints attest to the genesis of Guernica. As of the 1950s, Picasso had established a real working relationship with certain pho- tographers that he himself had selected: André Villers for his cut-outs and photographic collages; and Gjon Mili with whom he experimented with creations in the dark using a flashlight to draw ha- los of light in space. The last years of his life are immortalized by René Burri, Edward Quinn and, especially, David Douglas Duncan. 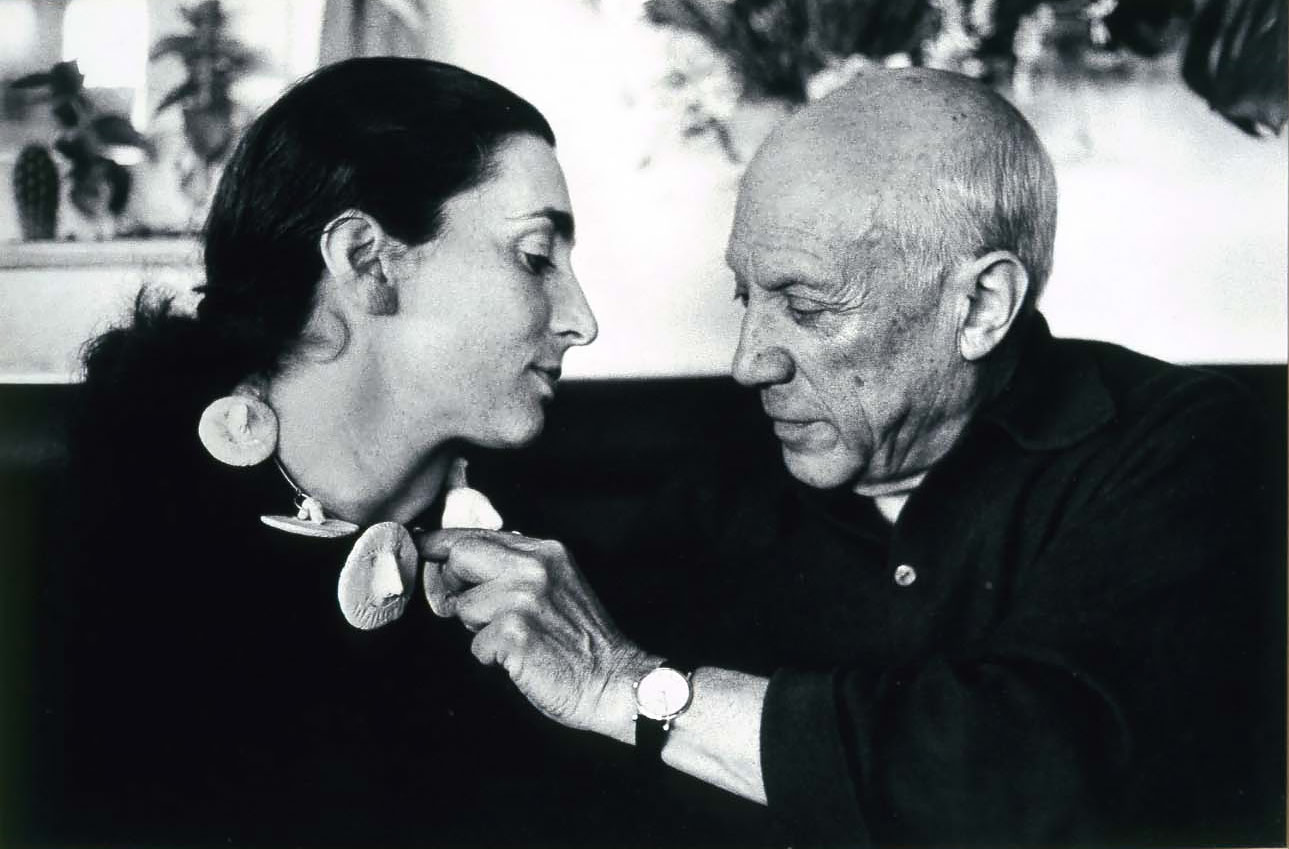 David Douglas Duncan used neither cinematic techniques nor spectacular staging - he just took photographs of Picasso among friends and during moments of creative intimacy. He explained it like this: "I wasn't an artist or an art historian... I was just a guy he liked, a guy with a camera. No more. We were just two men. It's very important to emphasize that I was not an art pro- fessional, and that was what he expected of me."

A former war reporter, David Douglas Duncan ne- vertheless knew how to be discreet: "When I was at Picasso's house, I spoke very, very little.” He in fact used a custom-built Leica M3D camera with ex- tremely quiet shutters so they wouldn't disturb the Maestro at work, and each image was taken in the prevailing light conditions. Between them, they communicated with few words. Duncan didn't speak French and Picasso spoke no English. Their common language was a rudimentary Spanish.

Picasso, with his inquisitive mind, was impressed by Duncan's intrepidity. He had great respect for the American's courage and was impressed by his extensive travels. But no matter where he went the world over, Duncan always returned to visit his friend. The insatiable Picasso, a cultural superstar on the world stage, rarely went out since his notoriety forced him to avoid the limelight. For Picasso, Duncan was more than a photojournalist. In his capacity as a globetrotter, he provided him with many services. In his letters and during his visits, Duncan kept the painter up to date on the latest international events. 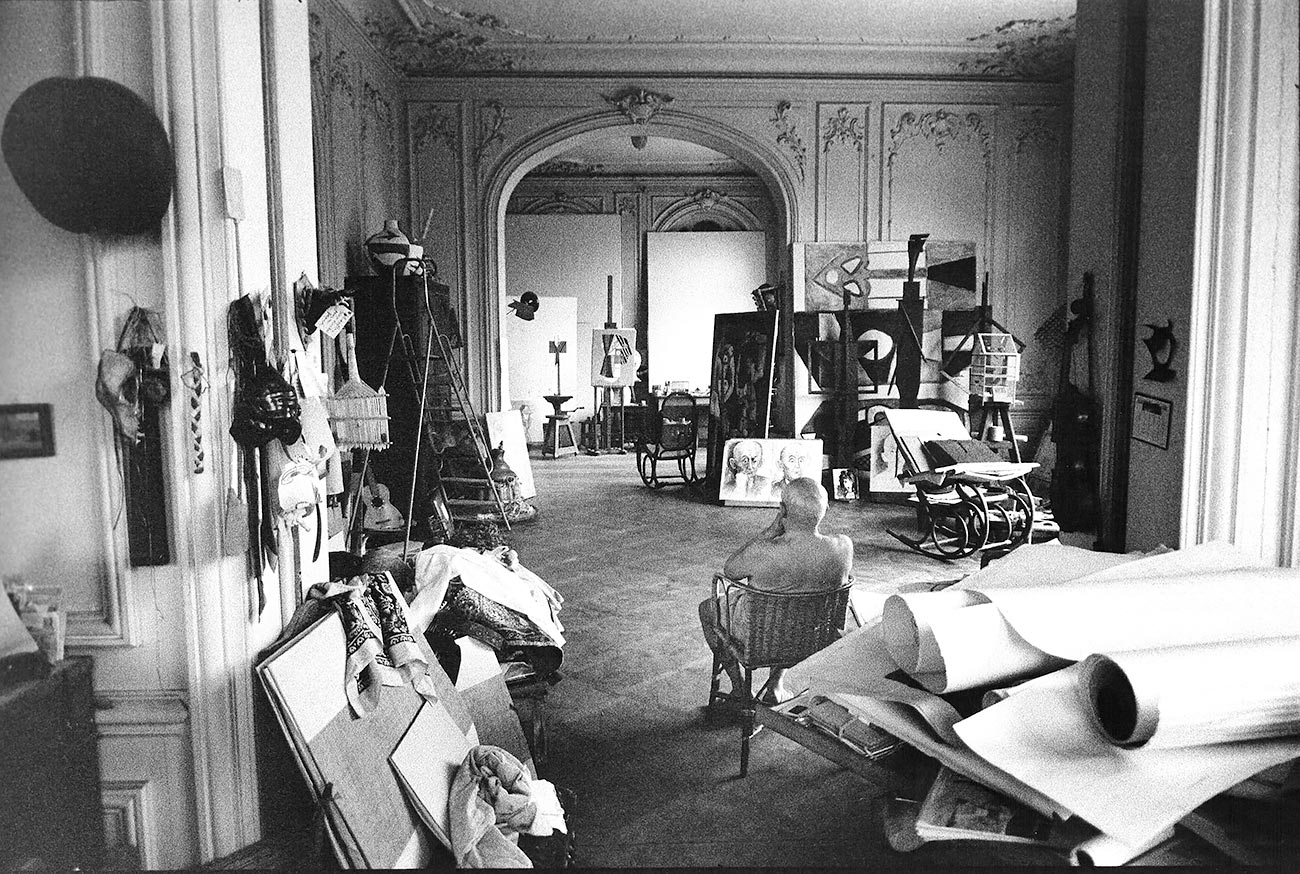 No one knows why Picasso called Duncan "Ismael", that is to say, "God has heard me". We can perhaps assume that the photographer was a real gift from heaven, capable of preserving his memory for posterity, that of an artist concerned with his legacy. "In my opinion, to search means nothing in painting. To find is the thing." confessed Picasso in 1923 to The Arts. "And what if Duncan had found and pierced the mystery of Picasso?" declares Tatyana Franck, director of Photo Elysée.

"After Alice Pauli's donation of three photographs by Henri Cartier-Bresson and Martine Franck re- presenting Alberto Giacometti, Balthus, and Ar - pad Szenes and Maria Helena Vieira da Silva, this donation is exceptional in more ways than one for Photo Elysée," emphasizes Tatyana Franck. "It allows us to enrich our collections with the photographic work of the author of the book This is War!, which was a milestone in the 1950s, to endow them with a remarkable acquisition showing the entire creative process of the greatest artist of the 20th century, and to strengthen our ties with the other institutions of Plateforme 10, in particular, the MCBA.

Born in Kansas City (USA) in 1916 and died in 2018, David Douglas Duncan obtained a degree in zoo - logy and Spanish at the University of Miami. During World War II, he was sent as a photojournalist to cover the war in the South Pacific, and worked for many magazines, including National Geographic, which commissioned him to do exclusive reports. After the war, he continued his career as a photo - journalist and worked with the prestigious maga - zine, Life, for which he immortalized the most im - portant historical events of his time. In 1971, he was the first photographer to have a solo exhibition at the Whitney Museum of American Art in New York.