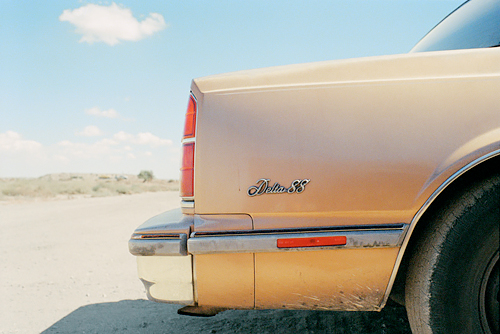 Stefano Galli is an Italian photographer born in 1981. After graduating at the University of Turin, with a BA in cinema, he moved to Copenhagen, Denmark, where he worked with director Lars Von Trier. We asked him a few questions about his life and work.

All About Photo: How do you approach your work from the beginning?

Stefano Galli: Often my projects comes out from unplanned photographs or random photos that I take daily ... For example Cars started from a shot I took of a huge dent on the side of a vehicle.... that photo spoked to me so much that I decided to make a project out of it and became a massive body of work... Something similar happened in 80 Skies . When I printed the ' Giant marlboro pack ' picture, I instantly notice how that little white line-trail coming for the airplane had struck me. I rapidly realize that I should have make a series about airplanes , airplanes in the skies... Once the initial idea is found everything else come by consequence, very smooth and even if I'm a very meticulous person, where lines, compositions, geometry and colors is well thought during the shoots ... the flows really comes out naturally... so I would say that my initial approach is pretty much driven by my unconscious or at least is not planned or staged neither is anticipated by hours of research, locations scouting or stuff like that ... Is very spontaneous almost as if I'm following my instinct... I walk a lot and I look out for things, details, signs... that eventually will lead me into my projects... I would say that sometimes, when I take photographs, I often fell a short while beforehand that the photo is going to happen. You arrive some place and stop and you're kind of exited even before you've located the actual motif. You can sense a place even before you're there, that particular light, an atmosphere. That's a little bit what my landscapes photos are about, I knew that a pictures was coming in that particular place in that particular moment, but I didn't plan it I just felt it right there in that very moment.

What would be a common thread or theme that runs through your work?

Solitude ! Solitude and taking photographs are connected in a important way. If you aren't alone, you can never acquire this way of seeing, this complete immersion in what you see, no longer needing to interpret, just looking. There's a distinct kind of satisfaction that you get from looking and traveling alone, and it's connected whit this relation of solitude to photography. If you are not alone you take different photos. I rarely feel the urge to take pictures if I'm not on my own. On the many trips I had during the making of cars it was sheer pleasure... I just got up in the morning and drove off into the blue and just kept driving all day. For long distance I didn't even have music to listen to. There was nothing I needed but to look and take photographs. I'm also very interested in photographing things that I know they will or are disappearing, from old vintage american cars to contrails of airplanes, for the first it might take decades while for the second one just a few seconds, but they will both eventually disappear.

What was the first piece of work you saw that influenced you as a photographer, and your work? And why?

I don't recall any particular piece or work that lead me to do what I'm doing now. Cinema definitely played a big role in my photographic development .. I studied film at the University and I've worked as a cinematographer... so movies and their photography have always fascinated me and I guess there is also where my influence comes from. I find that music and art as well as some trends have influence and shaped me. I believe that one of the reason why I've been wanting to move to the US is because I grew up highly influenced by 'American television' and I'm now trying to solve this, 'American / dream / vision' puzzle's of what America really is to me, through out the photographic media.