The Light At The End Of History by Abbey Hepner 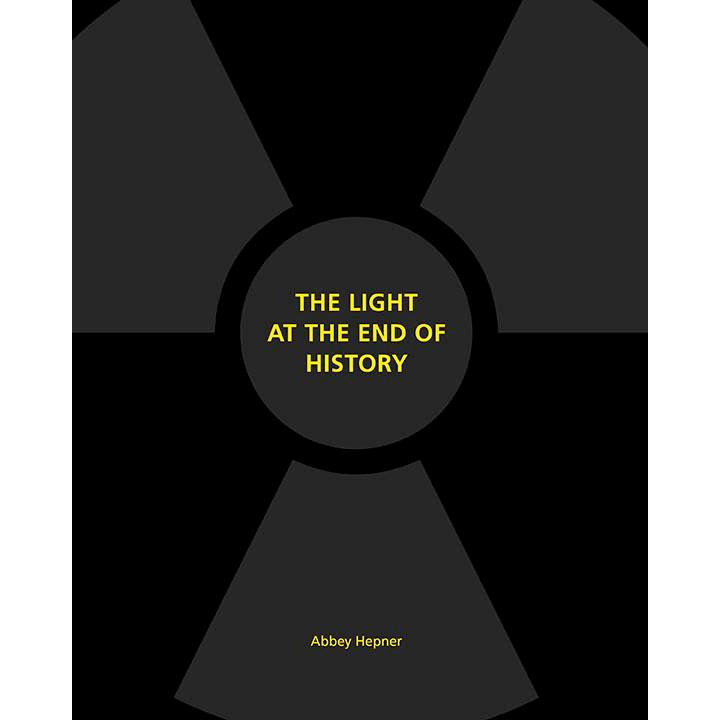 Hepner grew up between the Nevada Test Site and the Idaho National Laboratory, where the United States engaged in extensive nuclear testing and reactor experimentation. Fast forward to 2013, and she was living in Japan helping with disaster relief following the tsunami when earthquakes caused the Fukushima Daiichi nuclear disaster. She is a conceptual artist with a deft ability to pivot her messaging style and visual aesthetic to communicate directly or subvertly, analytically or emotionally. The result is a complex, multi-faceted book project examining the tangled history of nuclear energy, the atomic bomb, and radioactive waste.

As Kirsten Pai Buick writes in her accompanying essay, "The nuclear industry is inextricably bound to politics—local, national, and global. And in Hepner's quest to understand its details, its totality, and its interconnectedness she has traveled to places as a spectator where, as a perceivable outsider (whether through gender, race, or nationality), she was often in danger of becoming the spectacle. Brilliantly, she learned to shift the attention to a spectacle of her making and regain her agency as spectator." 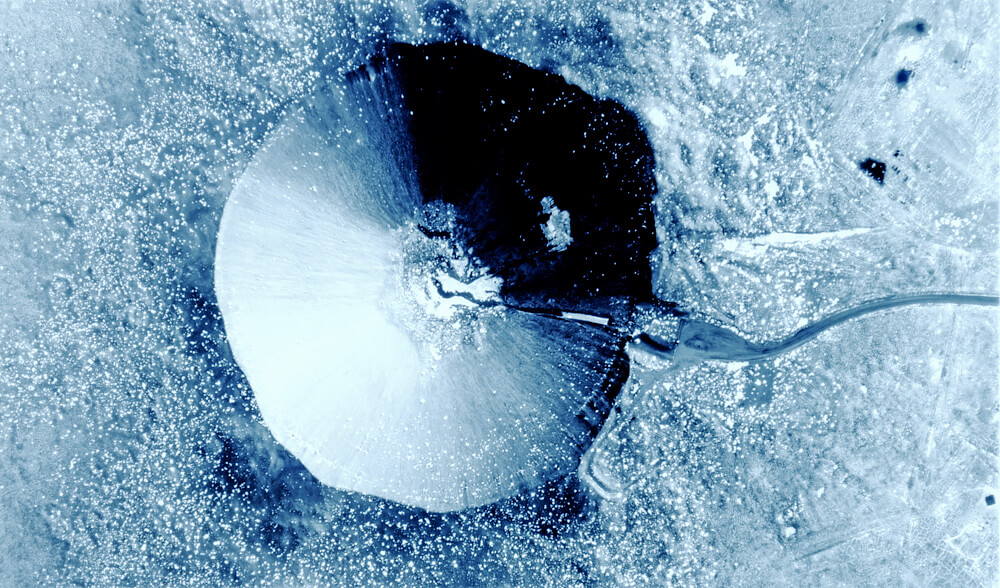 Told in seven parts, the photographs reveal an astounding range of aesthetic and technique in each section, exhibiting Hepner's conceptual as well as technical abilities to use form to directly enforce or unveil an angle of content. The images in the first section were made photographing Google Earth satellite images of bomb craters at the Nevada Test site. She writes, "The X-ray film captures an inverse of the image, filling the absent cavity with visible light. It creates an illusion of matter where the matter was removed, reflecting radiation's introduction into the atmosphere. My appropriation of these images is an act of counter-surveillance and provides commentary on image consumption and the inaccessibility of these places and their history." 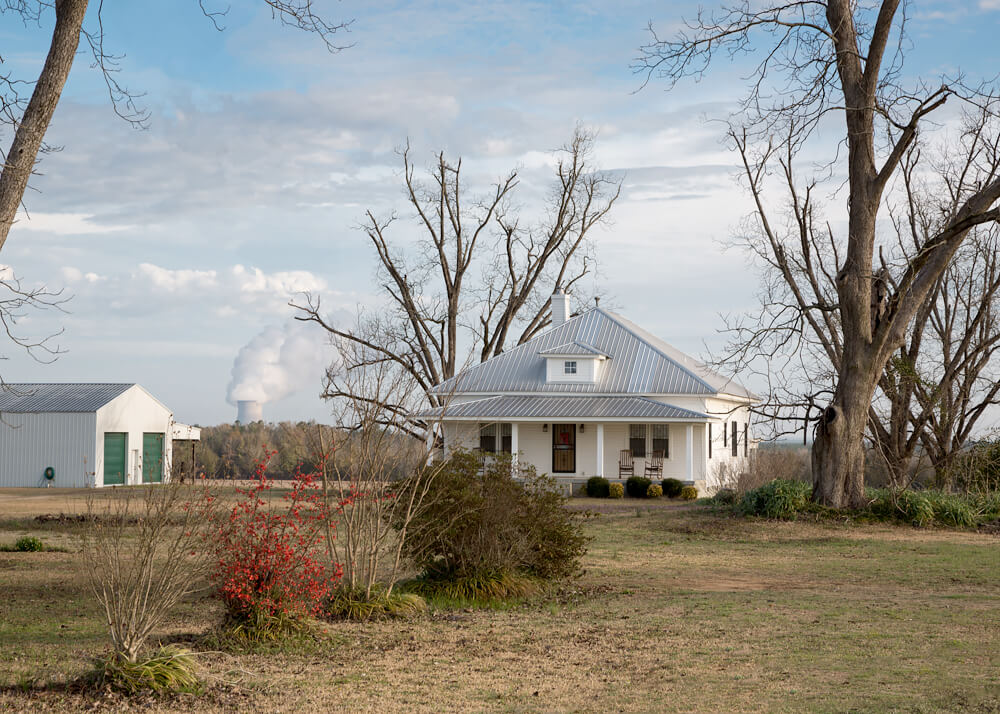 Changing her photographic technique or method between sections, she masterfully and effectively communicates direct and indirect content. Pastoral, sweeping, formal landscapes are lush and beautifully presented as archival pigment prints and video stills in section 6, "Scars on Landscape." In other sections she presents maps of sites and radioactive waste transport lines, or aerial images of uranium disposal cells.

In section 5 entitled "Transuranic," Hepner presents a series of uranotypes. Of the process she writes that, "[Uranotypes are] an obsolete nineteenth-century photographic process that uses uranium instead of silver to form the image; uranium is an element used to make nuclear bombs and is the basic fuel for nuclear power reactors. The series documents nuclear facilities from an outsider's perspective. The red and yellow hue of the uranotypes is likened to the color of the sky after the bomb was dropped on Hiroshima, and the material presence negates the unassuming and banal nature of these sites, reminding us of the reality ever present in the images and in the places we inhabit."

Part three, "Uravan" takes a look at a county in Colorado that was home to active uranium and vanadium mining, causing such soil and groundwater contamination that in 1986 the Environmental Protection Agency burned and buried the town, creating a 680-acre Superfund site. She writes, "I created three-dimensional, laser-engraved pigment prints by photographing the exact locations as those in historical images of buildings that existed before the town was destroyed. Formed by the laser burning into layers of paper at various depths, the historic structures appear against bleak and empty contemporary landscapes."

At times the images are dense and thick in composition. When they need to be, they're simple and direct, such as the image of a packet of potassium iodide pills perched up against a ledge at Plant Vogtle, the commercial nuclear reactor site in Waynesboro, Georgia. In the event of a radiation emergency, these pills made of a stable form of iodide can help block radioactive iodide from absorption by the thyroid gland. 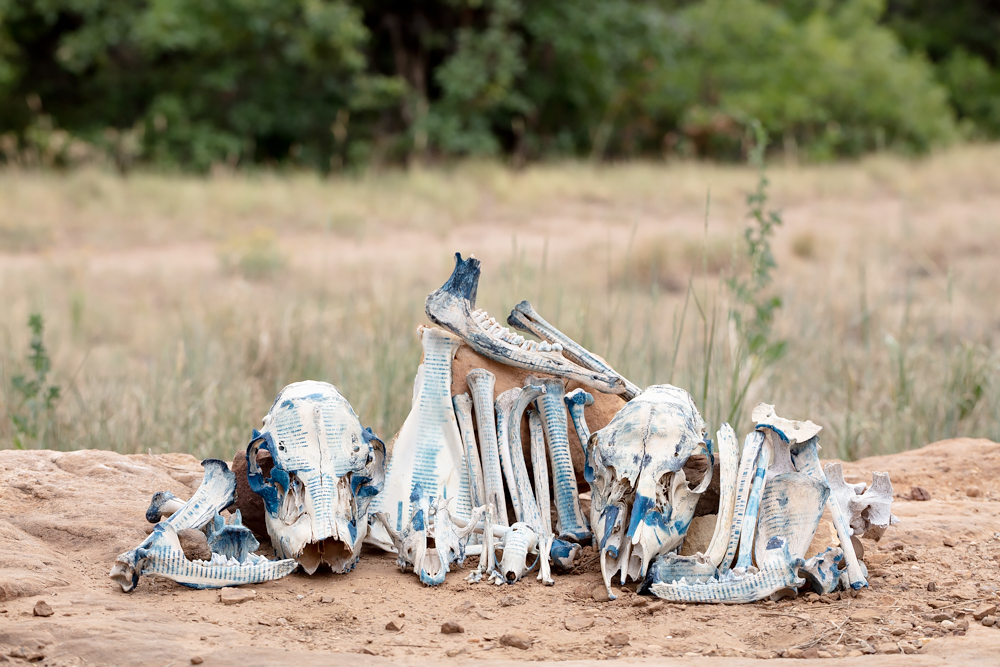 Haunting and directly personal, part two is entitled "Bomb Pulse," a series of cyanotypes on animal bones. "I took animal bones from my family's land in the southwestern United States and used the cyanotype process to imprint them with DNA sequencing data and the name and date of every nuclear bomb (1,040) detonated in the United States. Bones are of particular interest to me because two of my great uncles were first-generation downwinders who died of Myeloid leukemia at the ages of twenty-four and forty-two, respectively. Myeloid leukemia causes the body to make unhealthy blood-forming cells that grow in the bone marrow and is one of the illnesses with a known connection to atomic testing. Subsequently, some members in the following generations of my family developed benign bone tumors."

By combining visual strategies, techniques, aesthetic, facts, data, and glimpses of her own personal connection to the world's nuclear industry, Hepner presents an archive of history and a revelation of technical and artistic height. But it's more than this. As Buick writes in her essay, "She has the ability to make us look." And care. 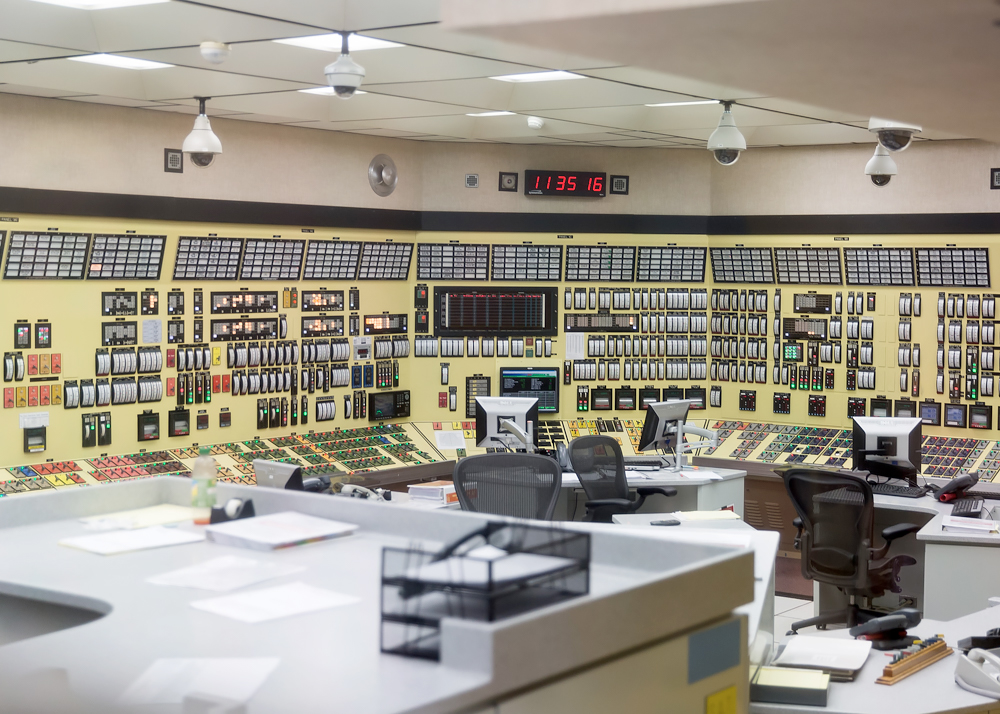 About the Artist:
Abbey Hepner is assistant professor of photography at Southern Illinois University Edwardsville. She holds a BFA in art and a BA in psychology from the University of Utah, and an MFA in photography from the University of New Mexico. Her work examines health, technology, and our relationship with place. She frequently works at the intersection of art and science, examining biopolitics and the use of health as a currency. Her work has been exhibited widely in such venues as the Mt. Rokko International Photography Festival, SITE Santa Fe, Krannert Art Museum, the University of Buffalo Art Galleries, and the Lianzhou Foto Festival.

About the Contributor:
Kirsten Pai Buick is professor of art history at the University of New Mexico where she teaches in the areas of the visual culture of the first British Empire; US art to 1940; African American art; representations of the American landscape and representations of enslavement; and the history of women as patrons and collectors of the arts. She has published extensively on African American art and been the recipient of numerous awards and fellowships, including the Smith-sonian American Art Museum's Pre-Doctoral Fellowship and the Charles Gaius Bolin Fellowship at Williams College. In 2015, she was chosen as the eleventh recipient of the David C. Driskell Prize for excellence in African American art. Her book Child of the Fire: Mary Edmonia Lewis and the Problem of Art History's Black and Indian Subject is published by Duke University Press. Her second book, In Authenticity: Kara Walker and the Eidetics of Racism, is in progress.