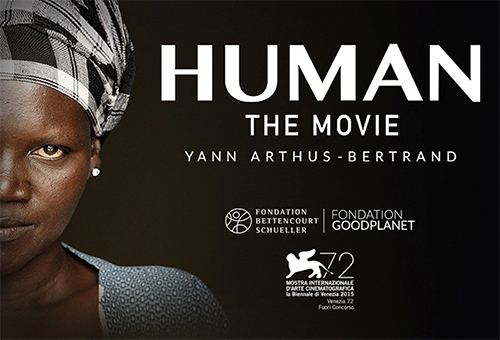 Shot in 60 countries over the course of three years, HUMAN's ambitiously produced and deeply humanistic documentary film will launch simultaneously on September 12th 2015 at the UNITED NATIONS and at the VENICE FILM FESTIVAL

GOOGLE on board as the exclusive digital partner to release special content
Following the global success of HOME, which was seen by more than 600,000 million people, award-winning filmmaker Yann Arthus-Bertrand is proud to announce imminent distribution plans for his new film project titled HUMAN.

Working with a dedicated team of translators, journalists and cameramen, Arthus-Bertrand spent three years collecting real-life stories from 2,020 women and men in 60 countries and 63 languages. These profoundly personal and emotional accounts are interspersed with stunning aerial footage that offers critical insight into life on earth. More than a film, HUMAN's narratively high reaching project consists in the experience of an immersive and inspirational odyssey, a movement to encourage reflection on the human condition, ignite a conversation around the meaning of our existence, and empower people to make social change.

From freedom fighters in Ukraine, to farmers in Mali, to death row inmates in the United States, HUMAN offers a significantly emotional and essential fresh documentation and portrait of our human condition in global and contemporary society, questioning the challenges our civilization faces. The United Nations has chosen to premiere HUMAN on September 12th, 2015 in honor of the 70th anniversary of the United Nation General Assembly. On the same day, the film will screen at the Venice Film Festival while Google release special and exclusive content on their homepage.

In a recent statement, Yann Arthus-Bertrand said: I dreamed of a film in which the power of words would resonate with the beauty of the world. Putting the ills of humanity at the heart of my work - poverty, war, immigration, homophobia - I made certain choices. Committed, political choices. But the men talked to me about everything: their difficulty in growing as well as their love and happiness. This richness of the human word lies at the heart of HUMAN. The movie relates the voices of all those, men and women, who entrusted me with their stories. And it becomes their messenger.

Financed by the Bettencourt Schueller Foundation, HUMAN, the multi media project, which includes a full-length feature and a variety of special content, will be made available internationally to the widest possible audiences through integrated traditional, institutional and digital distribution channels thanks to the support of the GoodPlanet Foundation.

A worldwide visibility with GOOGLE

From the 12th of September, Google, partner of the project, will make the film accessible to the general public in its extended version with 3 modules of 1h30 as well as a hundred of unseen interviews on Youtube.

Beginning of October: during the MIP TV

The HUMAN project will be presented during the MIP TV in Cannes in the main room of the Palais des Festivals to make of the French experience an international movement.