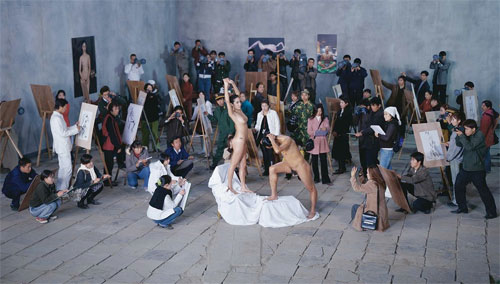 Beetles+Huxley, one of Europe's leading and most innovative photography galleries, is delighted to present the UK's first retrospective of Beijing artist Wang Qingsong, who represented China in the Venice Biennale 2013. The show, comprising of 11 large-format photographic works, explores the role of spectacle in shaping reality in contemporary China and marks the artist's first solo exhibition in London for almost 10 years.

Born at the start of the Cultural Revolution, Qingsong's provocative, and often humorous works comment on the overwhelming social and visual changes which have taken place in his native country over the last four and a half decades. Working predominantly in the mediums of photography and film, his pieces are known for their massive scale, deep symbolism and careful staging, which can sometimes take several weeks and involve up to 300 extras. Many of the artist's large-format photographs, which have been shown in galleries and museums across the globe, including the International Centre of Photography (NY) and the V&A (London), also attract significant attention at auction.

The globalisation of China and the explosion of consumerism are key topics in Qingsong's oeuvre. His interest in Western art history is also a recurrent theme which blends into Chinese aesthetic motives and literary traditions contributing to this feel of staged documentary. While the staging of his photographs involves meticulous preparation, often taking place in cinema studios and requiring hundreds of extras, he considers his work to be a photojournalistic endeavour.

Wang Qingsong was kind enough to answer our questions despite the fact that English is not his native language:

All About Photo: When did you realize you wanted to be a photographer instead of a painter and why?

Wang Qingsong: I never wanted to be a photographer. It was because in early 1990s, there came the opening up relaunch by the former leader Deng Xiaoping who made a special research visit into South China. He decided to open up some coastal cities for economic reform experiments. After this new move, China started to stage huge transformations. Foreign corporations were introduced into mainland. Because of these new advances, I found painting was not sufficient enough to express what my eyes captured and my mind thought everyday. Therefore, I'd say that photography came to find me who was mesmerized by its mermaid lure of keeping track of everyday transformations China happens. This new form of life gives not only me but also millions of Chinese people a new way to look into the possible future which leads to today's massive popularization of selfies online.

WQS: In 1996, I started to be allured into image making computer technology/software when I saw so many popular icons were influencing the new generation of people. Civilians longed to become their idols so there were some software apps which could turn them into their admiring icons. I visited so many department stores one of which was the most crowded in Wangfujing district, just like Oxford street in London where droves of people visited. There were corners which were packed with young people waiting to be beautified by computer apps. They change their faces onto their model/icon's bodies hence becoming very attractive and handsome. So the first shot was never shot with cameras. It was a series of computer collage images with my own face, kindly rough countrymen, on the slender bodies of HK movie actresses and actors like Arnold Schwarzenegger?

WQS: There is no one who can inspired me in front of such huge social changes. Everyday we are faced up with problems of all sorts. This country's population and its related social movement will incur many issues to talk about based on its sheer size and scale of eating, drinking, shitting and sleeping, all sorts of everyday trifles. 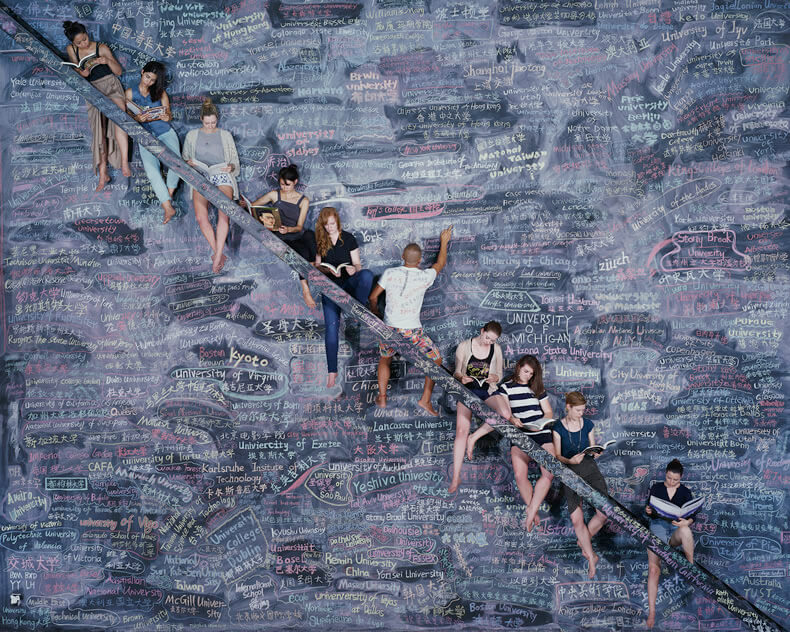 WQS: My art is social documentary. I am only a journalist. My photo shots are my notepads.

WQS: There is no editing on my works. I use real people, stage real sets, take real positive film shooting and making color changes.

WQS: China has 1.3 billion people backed up with diverse times of cultural ideas and traditional turmoils. This sheer size of human growth along with the inter-communication with the world will bring about many things to consider, because people are filled up with desires. When they see what they see, they think what they think they can do. This country is big, for sure and this times is dynamic, for better or worse. So I can only use my camera to make gigantic images to record the happenings.

AAP: Can you explain the process that you use to set up these massive scale images? How long does it take to prepare such work?

WQS: I usually loiter around on the street in the city or across the country. My eyes are like surveillance cameras keeping track of the ongoing episodes. Then when I am stimulated with such huge amount of image information, my mind starts to process some interesting stories with my style and my attitude. Then I stage sets by putting into all sources of snapshots in my eyes and mind before taking a complex and comprehensive photograph. That is why I call myself Social documentary photographer. The life gives the hues of colors to my works. The length of making shots varies from short term to long term. Sometimes, I can make shots several months, sometimes years, just to let the stage sets look old-fashioned and worn out, in the case of Follow Him, with so many books on the shelves to pick up dust over time.

AAP: What are your future projects?

AAP: What is the compliment that touched you most?

WQS: I might get many compliments without feeling touched. But often hear other artists saying you are more famous than me. But actually I feel they are very good, even better than me. It is normal for me to hear such compliments.

AAP: If you had to summarize the meaning behind your work, what would you say?

WQS: I cannot say any words on the meanings of my work. I think my works are like children books with images. You see what you see.

WQS: The funny thing is someone who said they loved my works and then they would say some other's works. Life is a miracle. People associate your life with someone's by sheer super shallow shady shadows.

WQS: Many things to talk about but have no clue to say where to start. There is a Chinese saying: 'I cannot talk enough over the days and nights.'

All About Wang Qingsong