Eve Arnold photographed many of the iconic figures who shaped the second half of the twentieth century, yet she was equally comfortable documenting the lives of the poor and dispossessed, "migrant workers, civil-rights protestors of apartheid in South Africa, disabled Vietnam war veterans and Mongolian herdsmen." Her joyful picture of a Cuban couple with their child was selected in 1955 for the world-touring Museum of Modern Art exhibition The Family of Man and seen by 9 million visitors. For Arnold, there was no dichotomy: "I don't see anybody as either ordinary or extraordinary," she said in a 1990 BBC interview, "I see them simply as people in front of my lens." Arnold was particularly noted for her work using available light, concentrating on the image in the lens and eschewing extensive use of photographic lighting and flash. Of this she said "By the time you set up lights the image is gone" in a Guardian interview in 2000.

Arnold's images of Marilyn Monroe on the set of The Misfits (1961) were perhaps her most memorable, but she had taken many photos of Monroe from 1951 onwards. Her previously unseen photos of Monroe were shown at a Halcyon Gallery exhibition in London during May 2005. She also photographed Queen Elizabeth II, Malcolm X, Marlene Dietrich, and Joan Crawford, and traveled around the world, photographing in China, Russia, South Africa and Afghanistan. Arnold left the United States and moved permanently to England in the early 1970s with her son, Francis Arnold. While working for the London Sunday Times, she began to make serious use of color photography.

In 1980, she had her first solo exhibition, which featured her photographic work done in China at the Brooklyn Museum in New York City. In the same year, she received the Lifetime Achievement Award from the American Society of Magazine Photographers. In 1993, she was made an Honorary Fellow of the Royal Photographic Society, and elected Master Photographer by New York's International Center of Photography.

She did a series of portraits of American First Ladies. In 1997, she was appointed a member of the Advisory Committee of the National Media Museum (formerly the Museum of Photography, Film & Television) in Bradford, West Yorkshire. She was appointed an Honorary Officer of the Order of the British Empire (OBE) in 2003.

She lived in Mayfair for many years until her last illness, when she moved to a nursing home in St George's Square, Pimlico. When Anjelica Huston asked if she was still doing photography, Arnold replied: "That's over. I can't hold a camera any more." She said she spent most of her time reading such writers as Fyodor Dostoyevsky, Thomas Mann and Leo Tolstoy.


Eve Arnold was born in Philadelphia, Pennsylvania to Russian immigrant parents. She began photographing in 1946, while working at a photo-finishing plant in New York City, and then studied photography in 1948 with Alexei Brodovitch at the New School for Social Research in New York.

Arnold first became associated with Magnum Photos in 1951, and became a full member in 1957. She was based in the US during the 1950s but went to England in 1962 to put her son through school; except for a six-year interval when she worked in the US and China, she lived in the UK for the rest of her life.

Her time in China led to her first major solo exhibition at the Brooklyn Museum in 1980, where she showed the resulting images. In the same year, she received the National Book Award for In China and the Lifetime Achievement Award from the American Society of Magazine Photographers.

In later years she received many other honours and awards. In 1995 she was made fellow of the Royal Photographic Society and elected Master Photographer - the world's most prestigious photographic honour - by New York's International Center of Photography. In 1996 she received the Kraszna-Krausz Book Award for In Retrospect, and the following year she was granted honorary degrees by the University of St Andrews, Staffordshire University, and the American International University in London; she was also appointed to the advisory committee of the National Museum of Photography, Film & Television in Bradford, UK. She has had twelve books published. 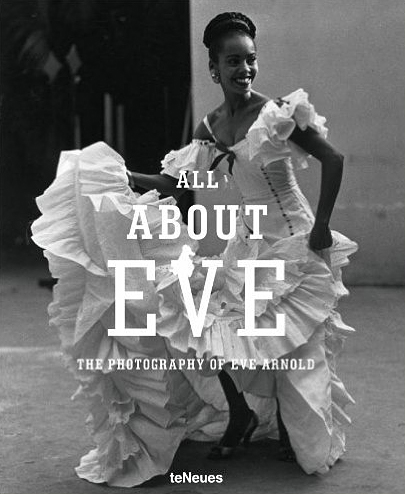 All About Eve
Author: Eve Arnold
Publisher: TeNeues
Year: 2012 - Pages: 212
Eve Arnold didn't even consider photography until a boyfriend gave her a Rolleicord when she was 34. But her talent and daring brought her immediate recognition and she was picked up by Magnum Photos only 5 years later. Arnold may be best known for her black and white images of Marilyn Monroe, but she has chronicled figures as diverse as migrant potato workers and heads of state in addition to screen icons during her assignments, which involved everything from politics, social issues, travel, to current events and a little glamour. Guided by her own words, this volume features Arnold's now iconic photographs as well as many never-before published images.

Dan Winters
Nationality: United States
Born: 1962
Dan Winters (b. October 21, 1962) is an American photojournalist, illustrator, filmmaker and writer.
He was born in Ventura County, California on October 21, 1962. He first studied photography and the darkroom process starting in 1971 while a member of his local 4-H club. In 1979, while still a high school senior, he began working full time in the motion picture special effects industry in the area of miniature construction and design. He went on to study photography at (…)
All About Dan Winters

Jeff Bridges
Nationality: United States
Born: 1949
Jeff Bridges is one of Hollywood's most successful actors and an Academy Award® winner. Over a career that spans five decades, his work has been recognized by the Academy Awards®, the Golden Globes, the Independent Spirit Awards, and the Screen Actors Guild. Truly passionate about photography, he makes behind-the-scenes pictures of the actors, crew and locations on his film sets. After completion of each motion picture, he edits the images into a book and gives copies (…)
All About Jeff Bridges

Chen Jiagang
Nationality: China
Born: 1962
Born in 1962 in Chong Qing, Chen Jiagang began his career as a celebrated architect and real estate developer before making the transition to photography. In 1999, he was named one of twelve "Outstanding Young Architects" by the United Nations. Jiagang is the founder of the Sichuan Upriver Museum, the first private museum in China and the author of Third Front (Timezone 8 Limited, 2007). He currently lives and works in Beijing.

Pierre Faure
Nationality: France
Born: 1972
Pierre Faure was born in 1972 in Nice and lives in Paris. He studied economics. He produces at first a work in which abstraction and organic evocations occupy a central place (series Rhizomes, Plis, Palimpsests); series which question the look of the spectator and play with the notions of scales and perspective. He also approaches the social question by realizing a work of dumping within a community Roma of Ile-de-France (2011-2012). In 2013 he is interested in the life of (…)
All About Pierre Faure

Heidi Lender
Nationality: United States
Born: 1966
Heidi Lender once reported on the fashion universe for national magazines, writing features and styling photo shoots. With a BA in apparel and textiles from Cornell University, she covered style, design, food and travel from New York to Paris. A soulful search led her to India, where she lived part-time studying yoga, and subsequently taught in San Francisco in her own studio. In 2009, she finally found herself – behind the lens of her first digital SLR, and retired (…)
All About Heidi Lender

Nasos Karabelas
Nationality: Greece
Born: 1992
Nasos Karabelas was born in Pyrgos, Greece and he is 27 years old. He started dealing with photography the last seven years and he has produced five short films and one feature film(OSMOSIS) which took part in festivals, in Greece and abroad.

This series is the attempt to understand the functioning of sensations. To explorate the space of emotions and the interaction between the forms of the image and the viewer. Each photo is an entity, which includes a certain (…)
All About Nasos Karabelas

Sabine Weiss
Nationality: Switzerland
Born: 1924
Sabine Weiss was born in Switzerland in 1924. In 1942, she wonders what she will do with her life, and decides that she should become a photographer because it is what she loves to do. She is the daughter of a mother who showed her art galleries and Roman churches at a very young age, and of a researcher chemist father who loved to see her print her little photos with the resources available at the time.