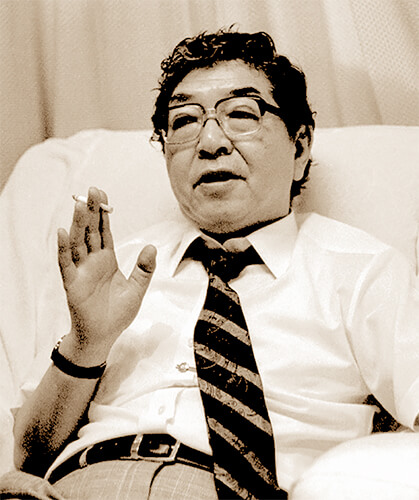 © Sally Larson 1989, CC BY-SA 3.0
Country: Japan | Born: 1933
Eikoh Hosoe studied at the Tokyo College of Photography. He made his first solo exhibition "American Girl in Tokyo" in 1956 at Konishiroku Photo Gallery. Between 1957 and 1959 he participated in the protest-exhibition of the new photographic movement "Juninno-Me" (The Eyes of the Ten) with photographers I. Narahara, S. Tomatsy, Y. Ishimito and the critic Tatsuo Fukushima. In 1959, six members of this group including Hosoe, Tomatsu and Narahara founded the Vivo Agency which is very important in the history of Japanese photography. He gained recognition with his work " Man and Woman" that was showed at the Konishiroku Photo Gallery in 1960 and published in 1961 by Camera Art, Tokyo. In 1962 Ordeal by Roses with the writter Yukio Mishima gained him international recognition as well as did Kamaitachi in 1969 featuring Tatsumi Hijikata (fonder of the Japanese contemporary dance called Buto). Hosoe has now published more than fifty books including monographs and essays. Hosoe is also a filmmaker.
Galleries:
Howard Greenberg Gallery
Clair Galerie
Miyako Yoshinaga
Share:

Harry Gruyaert
Nationality: Belgium
Born: 1941
For more than thirty years, from Belgium to Morocco, and from India to Egypt, Harry Gruyaert has been recording the subtle chromatic vibrations of Eastern and Western light. Gruyaert studied at the School for Photo and Cinema in Brussels from 1959 to 1962. He then began freelance fashion and advertising work in Paris, while working as a director of photography for Flemish television. In 1969 Gruyaert made the first of many trips to Morocco. His total immersion in its colors (…)
All About Harry Gruyaert

William Castellana
Nationality: United States
Born: 1968
William Castellana is an award-winning photographer whose images have been published internationally in periodicals such as Silvershotz (The International Journal of Contemporary Photography), Rangefinder, Creative Quarterly (The Journal of Art & Design), Newsweek, Time, New York, and others. His photographs reside in the permanent collections of over 40 museums in the US including the Hood Museum of Art, Museum of the City of New York, Museum of Modern Art Library, Yale (…)
All About William Castellana

Robert Moran
Nationality: United States
I am a freelance photographer living in a small town on the coast of Maine. My interest in photography began at the age of twelve when my parents bought me a Super 8 movie camera for Christmas. A few years later I bought my first 35mm camera. After studying art at the University of Maine, I started and ran several businesses over the course of twenty years. During that period I found the time to study photography and to pursue personal projects that resulted in several (…)
All About Robert Moran

Martin Parr
Nationality: United Kingdom
Born: 1952
Martin Parr is one of the best-known documentary photographers of his generation. With over 100 books of his own published, and another 30 edited by Parr, his photographic legacy is already established.

Parr also acts as a curator and editor. He has curated two photography festivals, Arles in 2004 and Brighton Biennial in 2010. More recently Parr curated the Barbican exhibition, Strange and Familiar.

Margaret Bourke-White
Nationality: United States
Born: 1904 - Died: 1971
Margaret Bourke-White studied at the University of Michigan and then at the Cornell University were she first discovered photography in 1927. She started taking pictures of buildings and engines. Henri Luce who created the magazine Fortune was very impressed with her work and decided to hire her as editor in chief in 1930. In November 1936 her picture of the Fort Peck dam makes the cover of Life Magazine. It was the beginning of a long collaboration (1931-1971) and the (…)
All About Margaret Bourke-White

Mark Coggins
Nationality: United States
Born: 1957
Mark Coggins is a crime-fiction novelist and photographer. Five of his six award-winning novels are illustrated with images taken by him. His photos have been exhibited in galleries across the country and have been featured in books of other authors, notably Red Mist by Patricia Cornwell and A Lover's Discourse: Fragments by Roland Barthes. He has written about photography for View Camera magazine and is a contributor to Getty Images.

All About Photo: When did (…)
All About Mark Coggins

Milton Rogovin
Nationality: United States
Born: 1909 - Died: 2011
Milton Rogovin was born in New York City in 1909. He graduated from Columbia University in 1931 with a degree in optometry and a deep concern for the rights of the worker. He moved to Buffalo, New York, in 1938, where he established his own optometric practice in 1939. In 1942, he married Anne Snetsky. That same year, he purchased his first camera, and was inducted into the U.S. Army, where he served in England as an optometrist until 1945. Upon his discharge, he (…)
All About Milton Rogovin

Robert Hecht
Nationality: United States
Born: 1941
For over fifty years, Robert Hecht has been a dedicated fine art photographer. He is largely self-taught, having learned his craft primarily by studying the prints and books of many of the medium's greats, and then by attempting to apply what he absorbed from them in the darkroom (and later in the digital darkroom). In addition, he studied briefly with photographer and teacher Ruth Bernhard in the 1970's, and considers that experience meaningful for giving him direct contact (…)
All About Robert Hecht

Kerekes Istvan
Nationality: Hungary
Born: 1977
I was born in 1977 in Marosvásárhely. I live in Mosonmagyaróvár – western Hungary I am taking part regulary in national and international photo competitions and exhibitions since 2004 My pictures have been shown in more than 40 countries, on five continents, and I won over 400 prizes and awards, in national and international photo contests I take mainly social life-, portrait-, and nature photographs.
Source kerekesistvan.com
All About Kerekes Istvan