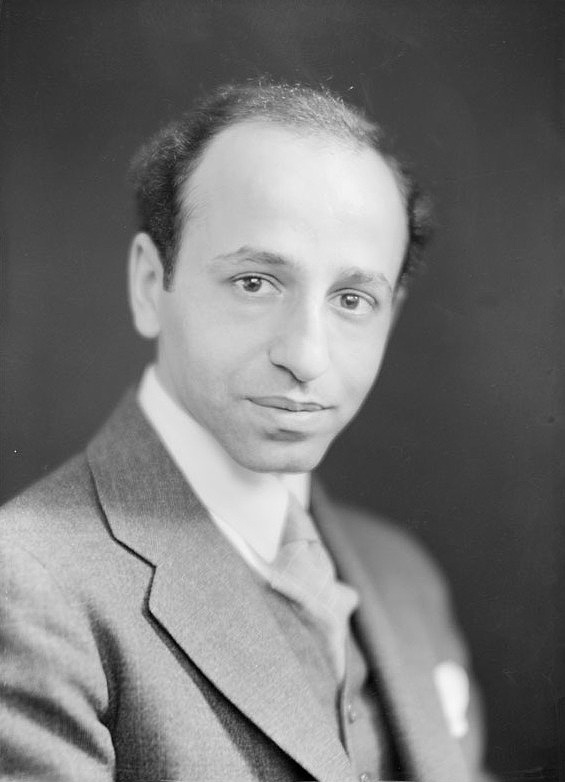 © © Claude Castonguay, 1936, Library and Archives Canada CC BY 2.0
Country: Canada | Born: 1908 - Died: 2002
Yousuf Karsh is the most renowned portrait photographer of our time. He has perceptively photographed the statesmen, artists, and literary and scientific figures that have shaped our lives in the 20th century. Known for his ability to transform "the human face into legend," many of the portraits that he created have become virtually the image of the great man or woman they portray, whether Winston Churchill, Ernest Hemingway, Albert Einstein, Georgia O'Keefe or Helen Keller.

In other words, "to experience a Karsh photograph is to feel in the presence of history itself." His photographs are in major private and public collections throughout the world, the Museum of Fine Arts in Boston holding the largest collection in the US.


Yousuf Karsh,was an Armenian-Canadian photographer and one of the most famous and accomplished portrait photographers of all time. ousuf or Josuf (his given Armenian name was Hovsep)[citation needed] Karsh was born in Mardin, a city in the eastern Ottoman Empire (present Turkey). He grew up during the Armenian Genocide where he wrote, "I saw relatives massacred; my sister died of starvation as we were driven from village to village." At the age of 16, his parents sent Yousuf to live with his uncle George Nakash, a photographer in Sherbrooke, Quebec, Canada. Karsh briefly attended school there and assisted in his uncle’s studio. Nakash saw great potential in his nephew and in 1928 arranged for Karsh to apprentice with portrait photographer John Garo in Boston, Massachusetts, United States. His brother, Malak Karsh, was also a photographer famous for the image of logs floating down the river on the Canadian one dollar bill. Karsh returned to Canada four years later, eager to make his mark.

In 1931 he started working with another photographer, John Powls, in his studio on the second floor of the Hardy Arcade at 130 Sparks Street in Ottawa, Ontario, close to Parliament Hill. When Powls retired in 1933, Karsh took over the studio. Karsh's first solo exhibition was in 1936 in the Drawing Room of the Château Laurier hotel. He moved his studio into the hotel in 1973, and it remained there until he retired in 1992. Canadian Prime Minister Mackenzie King discovered Karsh and arranged introductions with visiting dignitaries for portrait sittings. Karsh's work attracted the attention of varied celebrities, but his place in history was sealed on 30 December 1941 when he photographed Winston Churchill, after Churchill gave a speech to Canadian House of Commons in Ottawa. The image of Churchill brought Karsh international prominence, and is claimed to be the most reproduced photographic portrait in history. In 1967, he was made an Officer of the Order of Canada and in 1990 was promoted to Companion. Of the 100 most notable people of the century, named by the International Who's Who [2000], Karsh had photographed 51. Karsh was also the only Canadian to make the list.

In the late 1990s Karsh moved to Boston and on July 13, 2002, aged 93, he died at Boston's Brigham and Women's Hospital after complications following surgery. He was interred in Notre Dame Cemetery in Ottawa.

Works: Karsh was a master of studio lights. One of Karsh's distinctive practices was lighting the subject's hands separately. He photographed many of the great and celebrated personalities of his generation. Throughout most of his career he used the 8×10 bellows Calumet (1997.0319) camera, made circa 1940 in Chicago. Journalist George Perry wrote in the British paper The Sunday Times that "when the famous start thinking of immortality, they call for Karsh of Ottawa." Karsh had a gift for capturing the essence of his subject in the instant of his portrait. As Karsh wrote of his own work in Karsh Portfolio in 1967, "Within every man and woman a secret is hidden, and as a photographer it is my task to reveal it if I can. The revelation, if it comes at all, will come in a small fraction of a second with an unconscious gesture, a gleam of the eye, a brief lifting of the mask that all humans wear to conceal their innermost selves from the world. In that fleeting interval of opportunity the photographer must act or lose his prize." Karsh said "My chief joy is to photograph the great in heart, in mind, and in spirit, whether they be famous or humble."

The story is often told of how Karsh created his famous portrait of Churchill during the early years of World War II. Churchill, the British prime minister, had just addressed the Canadian Parliament and Karsh was there to record one of the century's great leaders. "He was in no mood for portraiture and two minutes were all that he would allow me as he passed from the House of Commons chamber to an anteroom," Karsh wrote in Faces of Our Time. "Two niggardly minutes in which I must try to put on film a man who had already written or inspired a library of books, baffled all his biographers, filled the world with his fame, and me, on this occasion, with dread." Churchill marched into the room scowling, "regarding my camera as he might regard the German enemy." His expression suited Karsh perfectly, but the cigar stuck between his teeth seemed incompatible with such a solemn and formal occasion. "Instinctively, I removed the cigar. At this the Churchillian scowl deepened, the head was thrust forward belligerently, and the hand placed on the hip in an attitude of anger." The image captured Churchill and the Britain of the time perfectly — defiant and unconquerable. Churchill later said to him, "You can even make a roaring lion stand still to be photographed." As such, Karsh titled the photograph, The Roaring Lion. However, Karsh's favourite photograph was the one taken immediately after this one where Churchill's mood had lightened considerably and is shown much in the same pose, but smiling. 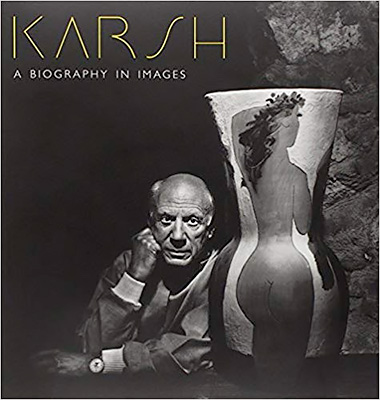 Karsh: A Biography In Images
Author: Yousuf Karsh
Publisher: MFA Publications
Year: 2009 - Pages: 208
During his remarkable life, Yousuf Karsh, who was born in Armenia in 1908, traveled the globe to photograph subjects ranging from historical figures to anonymous farmers to steelworks. Karsh: A Biography In Images is a full revision of the 1996 60-year retrospective of his work and brings that popular catalogue back into print in an affordable paperback format. This new edition covers the photographer's career with greater breadth than its previous incarnation, adding works from his early experiments and his photojournalism commissions in Canada. Karsh's reputation as one of the most sought-after portrait photographers of the twentieth century is well established. A roll call of his subjects is a veritable who's who of the modern age--Winston Churchill, Jacqueline Kennedy, Pablo Picasso, Walt Disney, Elizabeth Taylor and Albert Einstein, to name just a few--and this book features many of these figures, in some of the most recognized images of our time. But added to the portraits are a number of lesser-known or previously unpublished photographs--early figure studies, atmospheric views of the Ottawa theatre and scenes of wheat fields, city streets and factories across Canada. With its long autobiographical essay and extensive captions for each photo, many of them new to this edition, Karsh: A Biography In Images is both an elegant celebration and an indispensable overview of a life lived in photography.

Nan Goldin
Nationality: United States
Born: 1953
Nancy "Nan" Goldin is an American photographer. As a teenager in Boston in the 1960s, then in New York starting in the 1970s, Nan Goldin has taken intensely personal, spontaneous, sexual, and transgressive photographs of her family, friends, and lovers. In 1979 she presented her first slideshow in a New York nightclub, and her richly colored, snapshotlike photographs were soon heralded as a groundbreaking contribution to fine art photography. The Ballad of Sexual Dependency—(…)
All About Nan Goldin

Frank Ward
Nationality: United States
I am a professor in the Holyoke Community College Visual Arts Department, Massachusetts, USA. I have a Masters of Fine Arts degree from Bard College and have received a Massachusetts Cultural Council Artist Fellowship award in 2011 for my work in the former Soviet Union. Previously, the National Endowment for the Arts/ New England Foundation for the Arts have awarded me a grant for work with the Puerto Rican community in Holyoke, Massachusetts. The Polaroid Foundation and (…)
All About Frank Ward

K.K. DePaul
Nationality: United States
K.K. DePaul is an explorer of secrets, combining and recombining bits and pieces of memory to make sense of her family stories.

I have always been fascinated by multiple interpretations, double exposures, and the ambiguities that arise depending on which character is telling the story. My process begins with a collection of elements...images...writing. As I move the elements around, a visual narrative begins to take shape, signaling a new understanding of parallel (…)
All About K.K. DePaul

Noémie Goudal
Nationality: France
Born: 1984
Noémie lives and works between Paris and London. She won the HSBC Award in 2013.

Noémie Goudal has long been drawn to the meeting point of nature and culture, or as she puts it, the organic as “invaded” by the man-made. Goudal also feels a strong attraction to the theatre, and combines the two leanings in the series Les Amants (the Lovers), in which Cascade and Promenade play a part. However, the two works address the issues in different ways: the one is a (…)
All About Noémie Goudal

Peter Allert
Nationality: Germany
Peter Allert co-founded Munich-based Allert&Hoess Photography in 1989, specializing in still life , technical and scientific photography. This brought him while his study of biology before, to start as self-taught photographer. After setting up its own studio in 1991 and establishing its own light, lab and print facilities, the company made its breakthrough in 1992 with a photo series for the portfolio „Joop! – women’s shoes“. Its subsequent client list is long and (…)
All About Peter Allert

Daniel Beltrá
Nationality: Spain/United States
Born: 1964
Daniel Beltrá is a fine art photographer based in Seattle. His passion for conservation is evident in his evocatively poignant images of our environment. Since the early 1990’s, Beltrá’s work has taken him to all seven continents, including several expeditions to the Amazon, the Arctic, the Southern Oceans and the Patagonian ice fields, many of those in partnership with Greenpeace. He received the Wildlife Photographer of the Year and the Lucie Award for International (…)
All About Daniel Beltrá