Share:
Country: France | Born: 1894 - Died: 1986
Jacques Henri Lartigue is 69 years old in 1963 when he first presents a selection of his many photographs taken throughout his life in New York’s MoMa. That same year there is a photo spread of his work in the famous Life Magazine issue which commemorates the death of John Fitzgerald Kennedy, and which is publicized worldwide. To his great surprise, Lartigue becomes, overnight, one of the renowned photographers of the twentieth century.

Jacques learns about photography from his father as early as the year 1900. Henri Lartigue rewards Jacques’s enthusiasm by buying him his first camera when he is 8 years old. Thus begins the endless coverage of his childhood, including automobile outings, family holidays and especially his older brother Maurice’s (nicknamed Zissou) inventions.

Both brothers are fascinated by cars, aviation, and all sports with increasing popularity at the time. Jacques’s camera freezes each moment. As an adult he continues to attend sporting events and to take part in elite sports such as skiing, skating, tennis and golf.

However, ever mindful of the passage of time, photography is not quite enough to capture his childhood memories. A snapshot cannot encompass all there is to say and to remember. He thus begins keeping a journal and will continue to do so his whole life. Furthermore, as if to engage in a more renowned activity, he takes up drawing and painting. In 1915 he briefly attends the Julian Academy and thus painting becomes and remains his main professional activity. From 1922 on he exhibits his work in shows in Paris and in the south of France. In the meantime, in 1919, Jacques marries Madeleine Messager, the daughter of the composer André Messager, and their son Dani is born in 1921. Jacques and Madeleine get a divorce in 1931.

He revels in high society and luxury until the beginning of the 1930’s until the decline of the Lartigue fortune forces him to search for other sources of income. He refuses however to take on a steady job and thus lose his freedom, and so he scarcely gets by with his painting during the 30’s and 40’s. In the beginning of the 1950’s and not in accordance with the legend in which he is a complete unknown, his work as a photographer is noticed. He nevertheless continues to paint.

He embarks on a cargo ship to Los Angeles in 1962 with his third wife Florette. In a roundabout way, they stop on the East Coast and meet Charles Rado of the Rapho Agency who in turn contacts John Szwarkoski, MoMa’s photography department young curator. There is all-around enthusiasm. The first retrospective of his work is held in Paris’ “Musée des Arts Décoratifs” in 1975. One year earlier, Lartigue was commissioned by the President of France Valéry Giscard d’Estaing to shoot an official portrait photograph. In 1979 the Donation Agreement is signed and Lartigue becomes the first living French photographer to donate his work to the nation. He authorizes the Association des Amis de Jacques Henri Lartigue to preserve and promote the fund. In 1980, his dream of having his own museum comes true with the Grand Palais’ exhibit “Bonjour Monsieur Lartigue”. He continued his work as a photographer, painter and writer until his death in Nice on September 12th 1986. He was 92 years old. 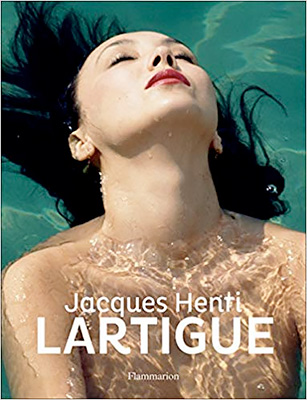 Jacques Henri Lartigue
Author: Jacques Henri Lartigue
Publisher: Flammarion
Year: 2019 - Pages: 128
Jacques Henri Lartigue's carefree, joyful, and spontaneous spirit permeates his photography. And yet there are other, lesser-known aspects of his work that invite us to take a closer look. Whether capturing amusing scenes on film or sketching them on paper or canvas, the artist covered a vast range of themes. Lartigue took photographs throughout his career, almost as a matter of routine, which makes his work a vital record of his times. His style gradually evolved, influenced by artistic experiments and personal encounters.

He left behind a rich and varied body of work. Albums of his private photographs provide a romanticized view of the photographer's personal life, revealing his doubts and attempts to understand his place in the world; they constitute an essential part of his body of work. Lartigue played with visual tricks, styles, and recurring themes--transportation, sports, shadow play, chic women--bridging different periods and lending consistency to his work.

The selection of photographs reproduced here represents the best examples of his most popular themes. 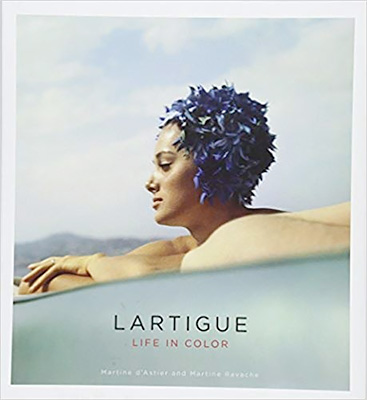 Lartigue: Life in Color
Author: Jacques Henri Lartigue
Publisher: Abrams
Year: 2016 - Pages: 168
Jacques Henri Lartigue (1894-1986) was the best-known "amateur" in the history of photography, famously discovered by the art world and given an exhibition at MoMA in New York when he was in his late sixties. He began by recording the pastimes and customs of his wealthy Parisian milieu, indulging his fascination with sports and aviation, and throughout his long life he was never without his camera. His friendships extended to the superstars of French culture, but he also made thousands of photographs of his family, wives, and lovers. His work was irresistibly warm and engaging.

Although known for his black-and-white work, Lartigue loved color film, experimenting with the Autochrome process in the teens and twenties and embracing Ektachrome in the late 1940s. His color work, reproduced here for the first time, is astonishingly fresh: the French countryside, the women in his life, famous friends (Picasso, Fellini), and glimpses from his travels all come alive in this delightful book. 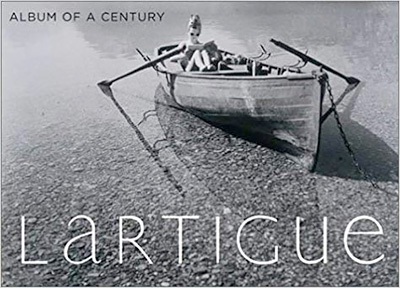 Lartigue: Album of a Century
Author: Jacques Henri Lartigue
Publisher: Abrams
Year: 2003 - Pages: 400
A sweeping photographic retrospective of the artist's life and work presents the best of Lartigue's entire catalog of photography--from his first photograph to his last-accompanied by six essays covering various aspects of his art. 10,000 first printing. 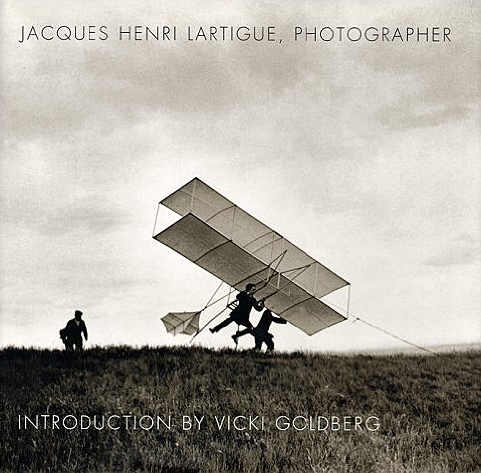 Jacques Henri Lartigue, Photographer
Author: Jacques Henri Lartigue, Vicki Goldberg
Publisher: Little, Brown & Company
Year: 1998 - Pages: 125
Jacques-Henri Lartigue (1894-1986) is a central figure of importance in the history of photography. "An amateur graced with genius for forms", at the age of 12 he was already producing photographs capturing the carefree antics of his eccentric family and friends. It was in these early years that he developed a fascination for the subjects that concerned him throughout his life: the immensity of the world to a child; the seaside; women of fashion; and above all, movement -from people walking or jumping, to flying machines and motor cars. Lartigue's photographic work was little-known until the 1960s, which gave him a unique freedom to create images for himself alone, unfettered by the criticism of others. His images evoke the sparkle of a long-gone era, documenting an idyllic world of ladies with parasols and gravity-defying hats; people flying kites or strolling in the park, on bicyles and at the races. This book offers an illustrated tribute to this photographer.

He became a Magnum Photos nominee in 2001 and a full member in 2005. He is a contract photographer for Newsweek magazine. Pellegrin is winner of many awards, including nine World Press Photo awards and numerous Photographer of the Year awards, a Leica Medal of Excellence, an (…)
All About Paolo Pellegrin

Gabrielle Duplantier
Nationality: France
Born: 1978
Gabrielle Duplantier studied painting and art history at the university of Bordeaux in France. Photography was a hobby on the side. After her university studies, she decided to dedicate herself to photography and she went to Paris where she worked as an assistant for several photographers. In 2002, she felt the need to come back home. Inspired by the rich and enigmatic Basque country, she started a series of photographs where landscapes, animals or humans are revealed (…)
All About Gabrielle Duplantier

Wenxin Zhang
Nationality: China
Born: 1989
Wenxin Zhang lives and works in San Francisco. She received her MFA at California College of the Arts.
Zhang creates non-linear photographic novels. In her writings and photography, she describes her experiences of growing up in China, her current life in San Francisco, and her personal relationships.
Zhang's work has exhibited widely in United States and China. Zhang was selected as a finalist in 2014 Three Shadows Photography Award, Leica Oskar Barnack Newcomer (…)
All About Wenxin Zhang

Imogen Cunningham
Nationality: United States
Born: 1883 - Died: 1976
Imogen Cunningham is renowned as one of the greatest American women photographers. In 1901, having sent away $15 for her first camera, she commenced what would become the longest photographic career in the history of the medium.. Cunningham soon turned her attention to both the nude as well as native plant forms in her back garden. The results were staggering; an amazing body of work comprised of bold, contemporary forms. These works are characterized by a visual (…)
All About Imogen Cunningham

Anton Gorlin
Nationality: Australia
Anton Gorlin is a landscape and a real estate photographer, who tries to capture the essence of the moment and beauty of shapes and forms.
Originally from Ukraine, he now lives and works in Sydney, Australia. Anton enjoys the beauty of Australian nature and does several trips a year to keep his portfolio growing. Prints of his photos landed in Ukraine, Russia, Germany, Australia, USA and other countries. Anton's works have been published in various magazines and (…)
All About Anton Gorlin

His work has been extensively published, exhibited, and collected worldwide, and has earned him the prestigious World Press Photo Foundation Medal four times.

His photographs have appeared on the covers of Time, Life, Fortune, Newsweek, The London Sunday Times, The Economist and numerous others, and have been selected (…)
All About Chuck Fishman