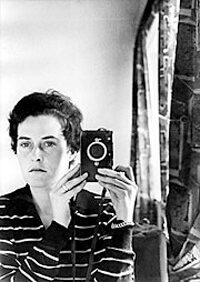 © The Inge Morath Foundation/Magnum Photos, Self Portrait, Jerusalem, 1958.
Country: Austria/United States | Born: 1923 - Died: 2002
Inge Morath, the daughter of a scientist, was born in Austria on 27th May 1923. The family moved to Nazi Germany and as a teenager she was sent to the force labour camp at Tempelhof for refusing to join the Hitler Youth. Morath graduated from Berlin University in 1944. After the Second World War she worked as an interpreter for the United States Information Service before joining the RWR radio network. Morath also contributed articles to the literary magazine Der Optimist. In 1950 Morath moved to France where she worked with the Austrian photographers Ernst Haas and Erich Lessing. This involved writing text captions for the two photographers. The following year she found work as a photojournalist with Picture Post, a magazine based in London. Morath's first book was, Fiesta In Pamplona (1954). After the publication of an photo essay on French worker priests by Morath in 1955 Robert Capa invited her to join the Magnum photo agency. Other books by Morath included Venice Observed (1956), Bring Forth The Children (1960), Tunisia (1961) and From Persia to Iran (1961). Morath married Arthur Miller in 1962 and together they published the bookIn Russia (1969). This was followed by My Sister Life (1973) with poems by Boris Pasternak, In the Country (1977), Chinese Encounters (1979), Salesman in Beijing (1984), Portraits (1987), Shaking the Dust of Ages (1998), an autobiography, Life As A Photographer (1999), Masquerade (2000) and Border Spaces; Last Journey (2002). Inge Morath died of lymphatic cancer on 30th January 2002.
Source Spartacus Educational
Agency:
Magnum Photos
Gallery:
Wach Gallery
Website:
Inge Morath Foundation
Share:

In 2016, she is also responsible for the creation of the art book fair FILAF ARTBOOK FAIR within the FILAF festival as (…)
All About Elisa Migda

Philip Metcalf
Nationality: United States
Philip Metcalf was born in the Finger Lakes area of central New York State. He is a photographer who focuses mainly on the landscape, shooting in black & white infrared. The “Fire Ghosts” portfolio explores the devastation and unexpected beauty caused by the 2011 Las Conchas forest fire in New Mexico. In 2013, a photo from this portfolio was selected for the Art of Photography show, curated by Julia Dolan, the Curator of Photography at the Portland Art Museum and hung in (…)
All About Philip Metcalf

Bryan Schutmaat
Nationality: United States
Born: 1983
From www.bryanschutmaat.com
About Grays the Mountain Sends: This project combines portraits, landscapes, and still lifes in a series of photos that explores the lives of working people residing in small mountain towns and mining communities in the American West. Equipped with a large format view camera, and inspired by the poetry of Richard Hugo, I’ve aimed to hint at (…)
All About Bryan Schutmaat

In 1963, Mapplethorpe enrolled at Pratt Institute in nearby Brooklyn, where he studied drawing, painting, and sculpture. Influenced by artists such as Joseph Cornell and Marcel Duchamp, he also experimented with various materials in mixed-(…)
All About Robert Mapplethorpe

Walker Evans
Nationality: United States
Born: 1903 - Died: 1975
Walker Evans (November 3, 1903 – April 10, 1975) was an American photographer best known for his work for the Farm Security Administration (FSA) documenting the effects of the Great Depression. Much of Evans's work from the FSA period uses the large-format, 8x10-inch camera. He said that his goal as a photographer was to make pictures that are "literate, authoritative, transcendent". Many of his works are in the permanent collections of museums and have been the subject (…)
All About Walker Evans

Billy & Hells
Nationality: Germany
Billy and Hells are two photographers: Anke Linz (Nürnberg, 1965) and Andreas Oettinger (Munich, 1963). They met in 1986, found a shared interest in photography and became partners in life and work. Inspired by the photographs of Irving Penn and Helmut Newton, Billy und Hells started to work in the field of fashion photography. They , accidentally came across a technique that would define their future works. By forgetting to take a black and white negative out of a Wü(…)
All About Billy & Hells

A self-taught photographer, he began to shoot photos in college for local underground musicians and artists. After graduation, he came to Beijing to develop his career as a professional photographer/artist. From 2000 to 2002, he participated in exhibitions in China and America with his fine art photographic works and his works (…)
All About Quentin Shih

Bear Kirkpatrick
Nationality: United States
Born: 1965
Bear Kirkpatrick’s work has been exhibited at the Center for Fine Art Photography (Ft.Collins), The Rayko Center (San Francisco), wall-space Gallery (Santa Barbara and Seattle), photo-eye Gallery (Santa Fe), Flowers Gallery (New York), and the PRC Gallery (Boston). His Wallportrait series was recently awarded a solo exhibitions at the Center for Fine Art Photography by Amy Arbus who juried the Portraits 2014 exhibition. His work has been published in Eyemazing (Netherlands),(…)
All About Bear Kirkpatrick

Marcel Rebro
Nationality: Slovakia
Born: 1968
The first time I smelled developer was in 1985 when I was memeber of National Sport Center (Parachuting) in Lučenec. With the tiny Smena 8M camera, I was trying to capture my parachuting colleagues when descending, jumping out of a plane, or even during the free fall. Burning glass and red light became my loyal friends. Later, with the switch to colour film, I, in turn, became a friend of photo labs.

In 2001, I switched to digital and after numerous changes (…)
All About Marcel Rebro