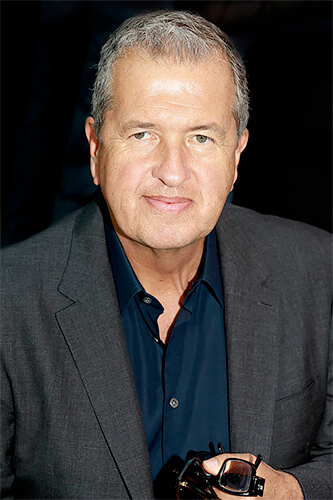 © Walterlan Papetti, 2014
Country: Peru | Born: 1954
Mario Testino is a Peruvian fashion photographer. His work has been featured in magazines such as Vogue and Vanity Fair. His career highpoint came when he was chosen by Princess Diana for her Vanity Fair photoshoot in 1997. Testino has been regularly employed by the British royal family ever since.

Aaron Hicklin of The Observer described him as "the world's most prolific magazine and fashion trade photographer". His persistence in shooting Gisele Bündchen is widely credited with elevating her to supermodel status.

Testino was born and grew up in Lima, the eldest son of a businessman. He was one of six children in a middle class family. When he was young he wanted to be a priest. Testino studied economics at Universidad del Pacífico. In 1976 he went to London to study photography. Living in an unconverted floor of a hospital, without much money, he funded himself by working as a waiter. He had his hair dyed pink which helped him get noticed as a photographer. He is one of six children born to an Italian father and an Irish mother. He attended the Catholic school Santa Maria Marianistas. Testino attended the Universidad del Pacifico, the Pontificia Universidad Catolica del Peru and the University of San Diego. In 1982 Testino moved permanently to London.

Testino has become one of the world's most well known and celebrated fashion photographers. His work has been featured across the globe in magazines such as Vogue, Vanity Fair and V, and he has crafted and contributed to the imagery of leading fashion houses such as Burberry, Gucci, Versace, Calvin Klein, Dolce & Gabbana, Salvatore Ferragamo, Estee Lauder and Michael Kors, among others. As well as having published seven books of his work and edited one other dedicated to contemporary art and artists from his native Peru, Mario Testino has had many successful exhibitions in galleries and museums around the world.

In 2002, The National Portrait Gallery in London staged the landmark exhibition “Portraits” by Mario Testino that to date remains its second most successful exhibit. For ten years it had the highest attendance of any exhibition ever to be held there. Over the next four years the exhibition went on tour to Milan, Amsterdam, Edinburgh, Tokyo, Mexico City, and Boston.

Testino has also received royal commissions, including The Prince of Wales, The Duchess of Cornwall, Prince William, Prince Harry, The Duchess of Cambridge, Diana Princess of Wales, The Duke of Kent, Prince and Princess Michael of Kent, Prince Nikolaos of Greece, Prince Willem-Alexander and Maxima of the Netherlands, Prince Haakon Magnus and Princess Mette-Marit of Norway and Her Majesty Queen Rania al Abdullah of Jordan.


Mario Testino OBE is widely regarded as one of the most influential fashion and portrait photographers of our times. His photographs have been published internationally in magazines such as Vogue, V Magazine and Vanity Fair. He has contributed to the success of leading fashion and beauty houses, creating emblematic images for brands from Gucci, Burberry, Versace and Michael Kors to CHANEL, Estée Lauder and Dolce & Gabbana.

Alongside his 40-year practice as a photographer, Testino has realised a body of work as a creative director, guest editor, museum founder, art collector/collaborator and entrepreneur. In 2007, at the request of his clients to provide full creative direction services, he formed MARIOTESTINO+ which today is a growing team of individuals who support Testino to realise the breadth of his creative output. 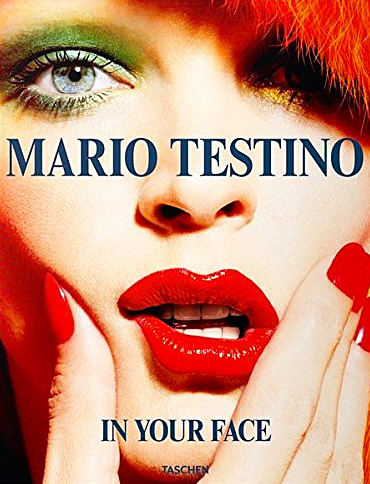 Mario Testino: In Your Face
Author: Mario Testino
Publisher: Taschen
Year: 2012 - Pages: 216
Experience a world of glamour through Testino's lensMario Testino's boundless talent with a camera must be maddening for other photographers working in a highly competitive field, but he remains one of the most revered stars in his profession. Often imitated and never equalled, Testino is graced with a natural ability to float effortlessly from studio to backstage to after-party, producing stunning shots in any kind of situation. His generosity as an artist, coupled with his striking vision, infuses his work with a warmth and intensity that invites, rather than intimidates, the viewer. From royals to mega-celebrities, Testino has shot some of the world's most inaccessible subjects, always with an ease that betrays the complexity of the task. When Testino gets "in your face" he captures you at your best--and that is what makes him the best. This unorthodox collection of various images chosen by Testino from the span of his 30-year career reflects the diversity of his work, ranging from fashion and advertising shots to sexually-charged images and autobiographical photos. Full of color, life, and humor, this selection is a testament to the sheer brilliance of a tireless chronicler of fabulousness. This book, published in the occasion of the 'In Your Face' exhibition at the MFA Boston (opening October 17, 2012), will only be commercialized in North/Central & South America. 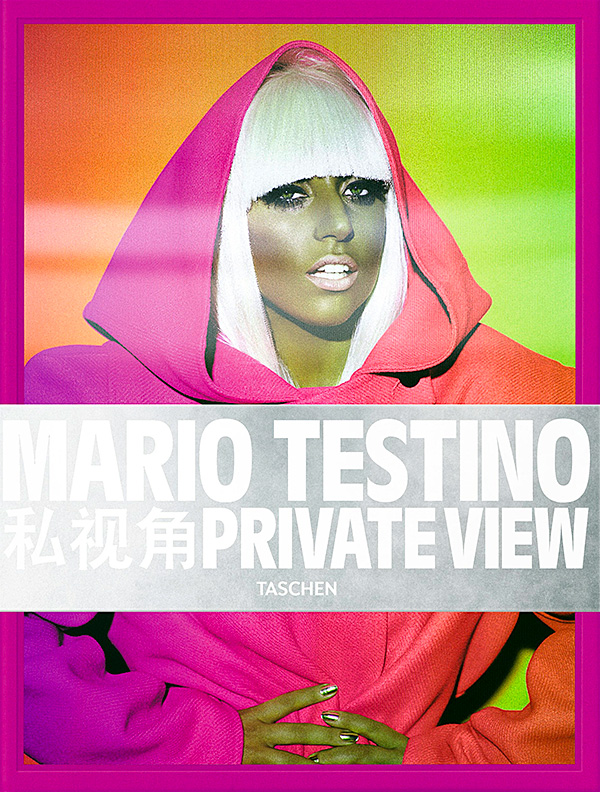 Mario Testino: Private View
Author: Mario Testino
Publisher: Taschen
Year: 2012 - Pages: 256
The photographer who can do it all If photography had a royal family, Mario Testino would be its reigning prince. So omnipresent is he at major magazine shoots and A-list events—an insider if ever there was one—that the mere mention of his name evokes a rush of adrenalin in anyone that cares, even a bit, about the worlds of fashion and celebrity. He is, too a terrific portraitist (frequently of real Royals), and what this book brings together is a smashing selection of his best studio work with gorgeous examples of his candid shots. Elizabeth Hurley perched on a piano wrapping her legs around Elton John, anyone? A beaming Gwyneth Paltrow clutching her freshly-won Oscar? Diana, Princess of Wales, and her handsome sons? Yes, please. A selection of Testino’s best recent advertising and fashion works rounds out this luscious and stupendously heterogeneous array, begging the question: does Mario Testino ever sleep? 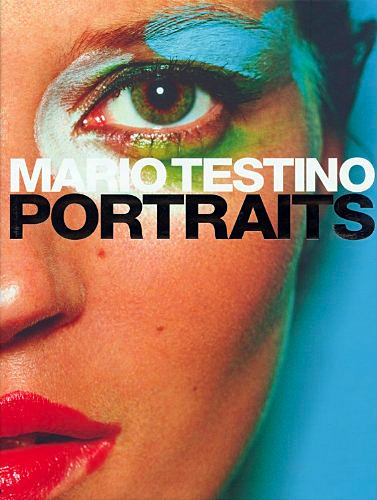 Mario Testino: Portraits
Author: Mario Testino
Publisher: Bulfinch
Year: 2002 - Pages: 200
Sexy, famous, beautifula Testino portrait is as unmistakeable as his subject. MARIO TESTINO: PORTRAITS features the cream of the crop in our celebrity-obsessed age: Naomi Campbell, Jude Law, Kate Moss, Gwyneth Paltrowthose whose names have become the hallmarks, almost the logos, of the fashion world. Testinos relationship with his subjects is simply and succinctly summed up by Anna Wintour, Editor-in-Chief of Vogue: People love to be photographed by Mario. His innate sense of fashion, which has made him the most sought-after contemporary photographer today, has transformed many of his portraits into icons.

Valerio Nicolosi
Nationality: Italy
Born: 1984
Valerio Nicolosi, filmmaker and photojournalist based and born in Rome in 1984, has always had a passion for photography and video. In 2008 he graduated with highest honours from the 'Experimental Television Center' in Rome. He is always looking for the "human factor" on his photos. He made few reportages from the Syrian-Lebanon border about the crises of refugees and the humanitarian corridors. He made Italian and european network and investigative journalism programs for (…)
All About Valerio Nicolosi

Magdalena Berny
Nationality: Poland
Born: 1976
Magdalena Berny is a graduate from the Pozna? University of Physical Education, self-taught photographer, passionate, mother of two. Over the years, she managed to create her own quite distinctive style. Works by Magdalena were published in Polish and foreign press dedicated to photographs, illustrations used as guides to photographing children and for projects of book covers.
About her:" Children as the subject of my photos appeared with their coming into the (…)
All About Magdalena Berny

Nando Morales
Nationality: Spain
Amateur photographer addict and seduced by nature, trying to one day be able to devote myself 100% and not have it as a hobby. Started in the world of photography, when I was very young and my sister gave me my first film camera. From that moment I do not remember having been without a camera in my hands until today. I feel good and happy especially doing landscapes and wildlife photography and enjoying the environment in which I am. Always that I can, travel around (…)
All About Nando Morales

Trained as an engineer, the shy fascination that he had during childhood for his father’s camera finally takes over in 2007 when he starts as an independent photographer. Half in the studio, half in the fields, his work goes all the way from the dark corners of staged photographs to documentaries about the questions of our time. His photographs have been (…)
All About Sebastien Tixier

Herman Leonard
Nationality: United States
Born: 1923 - Died: 2010
Herman Leonard was born in 1923 in Allentown, Pennsylvania to Romanian immigrants. At the young age of 9, he first witnessed an image being developed in his brother's darkroom and became enthralled with the magic of photography.

As the official photographer for his high school, Herman quickly learned that with a camera in hand, he had an "open sesame" to people and events, that his shyness might have prevented him from experiencing. When it came time for college, (…)
All About Herman Leonard

Garry Winogrand
Nationality: United States
Born: 1928 - Died: 1984
Garry Winogrand (14 January 1928, New York City – 19 March 1984, Tijuana, Mexico) was a street photographer known for his portrayal of America in the mid-20th century. John Szarkowski called him the central photographer of his generation. Winogrand was influenced by Walker Evans and Robert Frank and their respective publications American Photographs and The Americans. Henri Cartier-Bresson was another influence although stylistically different.
Winogrand was known for his (…)
All About Garry Winogrand

Mikhail Potapov
Nationality: Russia Federation
Born: 1983
Mikhail Potapov is an accomplished art photographer who is constantly searching to discover something new. Potapov Mikhail was born in Russia in 1983, the city of Rostov-on-don. By education the teacher, I work as the judo coach. I got interested in photography in 2014, it's a great hobby for me. I consider myself an artist rather than a photographer. I shoot in different styles and it is important for me to constantly search for new things. When I started to take pictures, (…)
All About Mikhail Potapov

Erwin Olaf
Nationality: Netherlands
Born: 1959
Erwin Olaf (b. 1959) is an internationally exhibiting artist with works in the collections of museums and galleries around the world. Olaf has received numerous highly prestigious commissions and awards. Olaf emerged onto the international art scene when his series ‘Chessmen’ won the Young European Photographer of the Year award in 1988. This was followed by an exhibition at the Ludwig Museum in Cologne, with subsequent solo and group shows at major museums and (…)
All About Erwin Olaf

Lise Sarfati
Nationality: France
Born: 1958
Lise Sarfati has lived and worked in the United States since 2003. She has realized six important series of photographs there. They have been followed by exhibitions and publications. Each of her works makes clear the identity of an approach focused on the intensity of the rapport established with the person photographed, and of that person with the context. A vision in which the individual is environment, a map outlining a perilous cultural geography. The richness of (…)
All About Lise Sarfati

Burt Glinn
Nationality: United States
Born: 1925 - Died: 2008
Born in Pittsburgh, Pennsylvania, Burt Glinn served in the United States Army between 1943 and 1946 before studying literature at Harvard University where he edited and photographed for the Harvard Crimson college newspaper. From 1949 to 1950, Glinn worked for Life magazine before becoming a freelancer. Glinn became an associate member of Magnum in 1951 along with Eve Arnold and Dennis Stock - the first Americans to join the young photo agency - and a full member in 1954. (…)
All About Burt Glinn