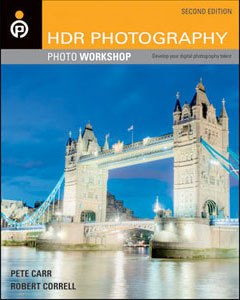 HDR Photography Photo Workshop
By Pete Carr, Robert Correll
Publisher : Wiley, John & Sons, Incorporated
2011 | 352 pages
High Dynamic Range (HDR) photography offers a new range of creative possibilities to the photographer who is skilled in the technique. HDR requires specific camera skills as well as the use of specialized software, and the photographers who wrote this book are experts in both. They explain the process of shooting the same subject at different exposures, combining those shots into a single HDR image, fine-tuning brightness and contrast, minimizing noise, layering images, and more, including creative techniques with Photoshop and Lightroom. 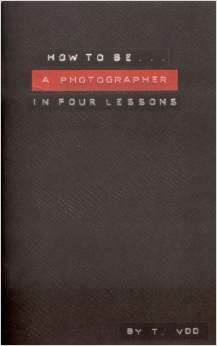 How To Be A Photographer In Four Lessons
By Thomas Vanden Driessche
Publisher : Andre Frere Editions
2014 | 48 pages
In this small, tongue-in-cheek booklet, Thomas Vanden Driessche outlines how to be a number of photographer types in four simple steps. Using humorous stereotypes, photo booth self-portraits and no little amount of self-depreciation, he enlightens the curious layperson who seeks to become, for instance, a contemporary photographer, war photographer, conceptual or surrealist photographer, wildlife photographer or modern photojournalist, and even goes so far as to include a (bad) amateur, wedding, kitsch, crowdfunded or emerging photographers. Steps toward becoming a photographer aligned with either the Helsinki or D³sseldorf school are an added bonus.

How To Be A Photographer In Four Lessons
Thomas Vanden Driessche 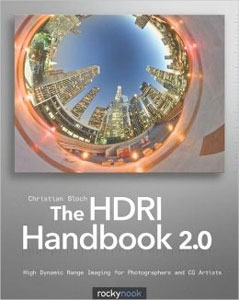 The HDRI Handbook 2.0: High Dynamic Range Imaging for Photographers and CG Artists
By Christian Bloch
Publisher : Rocky Nook
2013 | 672 pages
In 2007, The HDRI Handbook was the first book to present this revolutionary new field to a larger audience. These days HDRI is a fully mature technology available to everyone. Real estate and landscape photographers have adopted it as part of their regular workflow, it has become one of the hottest trends for ambitious amateurs and creative professionals alike, and the modern movie industry would be completely dysfunctional without it.
Now The HDRI Handbook 2.0 redefines its own gold standard. It has been completely rewritten and is packed with practical hints and tips, background knowledge, reference tools, breathtaking artist portfolios, and inspiring interviews. The book includes dozens of new step-by-step tutorials. Beginners will get a methodically solid introduction and advanced readers will be able to refine their technique to perfection.

Publication
The Locusts by Jesse Lenz
Charcoal Press is pleased to announce The Locusts, the first major monograph by photographer and publisher Jesse Lenz. After a few years of living and traveling North American in an airstream with his family, Lenz settled down in a farm in rural Ohio. He began photographing his children as they ran wild in fields, built forts in the attic, and fell asleep surrounded by lightsabers and superheroes.
Read More

Publication
Then and There: Mardi Gras 1979 by Harvey Stein
Inspired by the Polaroid SX-70 instant photographs taken by the great Greek American artist, Lucas Samaras, the well-known photographer Harvey Stein, in the mid 1970's bought an SX-70 camera and for the rest of that decade used it to shoot in his signature style, intimate portraits of strangers in the street. This in addition to his major work of street photography in which he simultaneously confronts and collaborates with strangers using his two Leica M-4 film cameras.
Read More

Publication
Thierry Clech: Indian Lights
India is a strange country. You come back without being fully aware of what you really saw. Everything that seems real is not. And everything that appears as imbued with supernatural well and truly exists. This doubtful situation is in fact the uncertainty of street photography: everything goes too fast, constantly appears and disappears in the viewfinder as visions we try to capture, following the impulses of our unconscious. Nothing is more beautiful than the apparent banality, behind which we sometimes discover another world, invisible if we don't take the time to look at it, to open our eyes to detect its mysteries and symbols that move out of the shadows into the limelight for a moment, before vanishing.
Read More

Publication
No. Superhero by Ole Marius Joergensen
No superhero is a series of work by the acclaimed Scandinavian artist, Ole Marius Joergensen. The work features meticulously staged, cinematic photographs that depict seemingly ordinary situations which are then infused with a juxtaposed narrative. This unlocks an unexpected and unique world that feels both old and new.
Read More

Publication
The Ameriguns by Gabriele Galimberti
Of all the firearms in the world owned by private citizens for non-military purposes, half are in the United States. Numerically they exceed the countryÆs population: 393 million for 372 million people. This is no coincidence, nor a matter of market alone: but of tradition and Constitutional guarantee. It is the history of the Second Amendment, ratified in 1791 to reassure the inhabitants of the newly independent territories. Two hundred and fifty years later, it is still entrenched in all aspects of American life. This book frames its current status through what are seen as four fundamental American values: Family, Freedom, Passion, Style.
Read More

Publication
Loving: A Photographic History of Men in Love 1850s-1950s
LOVING. A Photographic History of Men in Love portrays romantic love between men in hundreds of moving and tender vernacular photographs taken during the 100-year period between the 1850s and 1950s. This visual narrative of astonishing sensitivity brings to light an until-now-unpublished collection of hundreds of snapshots, portraits, and group photos made in the most varied of contexts, both private and public. Some are formal studio portraits, others were shot at the beach, in suburban settings, in the countryside, and at home. The range of individuals shown is extensive, covering nineteenth-century working class men, fashionably dressed businessmen, university students, and soldiers and sailors of all ages-spanning the time between the Civil War and World War War II, and into the 1950s.
Read More

Interview
Publication
Craig Varjabedian: Found Horizons
Craig Varjabedian's photographs of the American West illuminate his profound connection with the region and its people. His finely detailed images shine with an authenticity that reveals the ties between identity, place, and the act of perceiving. For Varjabedian, photography is a receptive process driven by openness to the revelation each subject offers, rather than by the desire to manipulate form or to catalog detail. He achieves this vision by capturing and suspending on film those decisive moments in which the elements and the spirit of a moment come together
Read More

Publication
Event
Phil Bergerson Retrospective in Search of Meaning
Phil Bergerson "In Search of Meaning" marks the Stephen Bulger Gallery's sixth solo exhibition of work by Canadian photographer Phil Bergerson (b. 1947, Toronto, Canada) and coincides with the release of his third monograph, A Retrospective, published by Daylight Books. The publication is a survey of Bergerson's illustrious 50-year career which began in the 1970s with his exploration of performance art, drawing, painting and printmaking, before embracing photography exclusively. His early imagery includes an investigation of vernacular photography by manipulating found family snapshots to imbue them with new meanings, and the creation of grid-based works presenting multiple images that comment on the excesses of consumer culture.
Read More

Publication
California Love: A Visual Mixtape
This amazing compendium of photographs celebrating the Golden State is truly a love letter to California. One hundred and ten photographers offer intriguing photographs and perspectives on our special sliver of the west coast. At a time of Covid, wildfires, earthquakes, and protest, there is comfort in our deep connectedness to place.
Read More
Advertisement