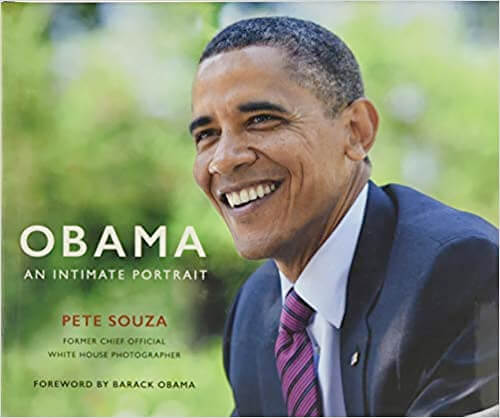 Obama: An Intimate Portrait
By Pete Souza
Publisher : Little, Brown and Company
2017 | 352 pages
During Barack Obama's two terms, Pete Souza was with the President during more crucial moments than anyone else--and he photographed them all. Souza captured nearly two million photographs of President Obama, in moments highly classified and disarmingly candid.

Obama: An Intimate Portrait reproduces more than 300 of Souza's most iconic photographs with fine-art print quality in an oversize collectible format. Together they document the most consequential hours of the Presidency--including the historic image of President Obama and his advisors in the Situation Room during the bin Laden mission--alongside unguarded moments with the President's family, his encounters with children, interactions with world leaders and cultural figures, and more.

Souza's photographs, with the behind-the-scenes captions and stories that accompany them, communicate the pace and power of our nation's highest office. They also reveal the spirit of the extraordinary man who became our President. We see President Obama lead our nation through monumental challenges, comfort us in calamity and loss, share in hard-won victories, and set a singular example to "be kind and be useful," as he would instruct his daughters.

This book puts you in the White House with President Obama, and will be a treasured record of a landmark era in American history.Age Range: Adult

Best-Of
Publication
Best Photo Photo Books of 2022
Here is a selection of photo books that, in my opinion, should be in your library! It is of course a very subjective choice and if I could, I would have chosen at least 50 of them. This collection will help you to draft your 'wish list' or to find the perfect gift for someone who enjoys photography. Happy Holidays!
Read More

Publication
Event
Oh India by Thomas James Parrish
Thomas James Parrish presents his photobook and photography exhibition 'Oh India' as a part of his photography fundraising project. In 2016 Thomas spent 6 months travelling across northern India on a documentary-travel project. During his time in West Bengal, he had the fortune to visit Kaikala Chetana, a volunteer-run, community-based education program for India's rural poor in the Haripal Block of the Hooghly District, 50km from Kolkata.
Read More

Publication
Olivier Kervern: Fin D'Automne
"Fin D'Automne" from Olivier Kervern is a collection of black and white photographs taken during three consecutive journeys to Japan, between 2015 and 2019, that delicately translate the feeling of being a foreigner in Japan and the intimacy of a new love story.
Read More

Publication
I Hope You Find What You're Looking For by Gloria Baker Feinstein
Nowadays who really looks forward to open their mailbox? Let's be honest, no ones writes anymore and when you have a letter in the mail it is either a bill or an unwanted commercial. Yet sometimes there are surprises and I felt like a little girl when I received the unexpected gift from Gloria Baker Feinstein. I must confess I was not familiar with her work and it was with no prejudice what so ever that I opened her book 'I Hope You Find What You're Looking For'.
Read More
Advertisement