This is the largest acquisition of Aguilar's work by a museum

The Los Angeles photographer Laura Aguilar, who died last year at the age of 59, created work that explored her own identity, challenged traditional notions of beauty, and celebrated the ties that bound her to the Latinx, queer, and working-class communities in the city. Now, a group of the artist's most important works will remain in Los Angeles, with the J. Paul Getty Museum announcing the acquisition of 35 photographs from five series that span Aguilar's 30-year career.

The acquisition was made possible through the generous support of the Museum's Photographs Council and with additional help from council members Jan and Trish de Bont.

Laura Aguilar left us far too soon, but her powerful work remains as a testament to her vision and talent, says Timothy Potts, director of the Getty Museum. It is important and appropriate that these photographs will stay in Los Angeles, to which her practice had such a strong connection, and we are especially grateful to the Photographs Council and Jan and Trish de Bont for their vision in supporting the purchase of this important body of work.

Aguilar grew up in the San Gabriel Valley, and was introduced to photography in high school. She continued studying the medium in the early 1980s while attending East Los Angeles College, where she also became more attuned to her own Mexican-American identity through courses in Chicano studies. In the mid-1980s, while coming to terms with her sexuality (Aguilar identified as a lesbian), she became actively engaged with LGBTQ causes. Themes related to race, sexuality, marginalization, and economic disparity became defining characteristics of her work.

In 2017, the Vincent Price Art Museum at East Los Angeles College presented Laura Aguilar: Show and Tell, the artist's first comprehensive retrospective. The exhibition was a highlight of the Getty's Pacific Standard Time: LA/LA project, a region-wide initiative that explored Latin American and Latinx art in dialogue with Los Angeles. Aguilar passed away shortly after the exhibition closed. 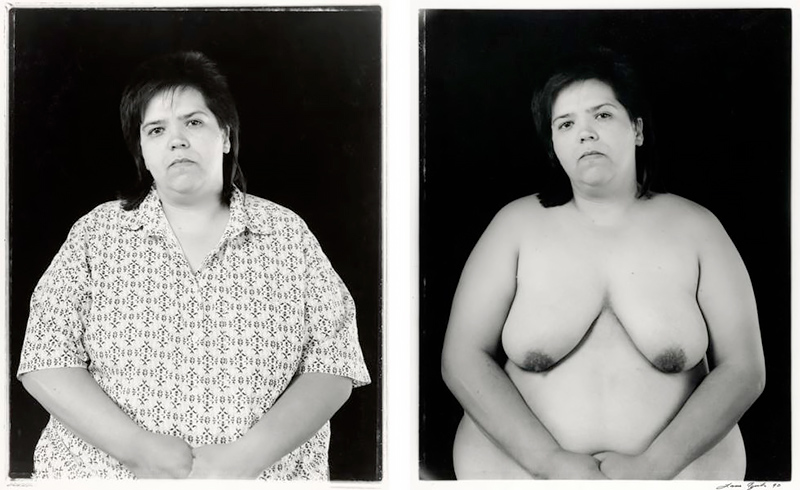 The work of Laura Aguilar is incredibly important and helps us better understand the role photography has played in the diverse communities of Southern California, says Jim Ganz, senior curator in the Getty's Department of Photographs. We are looking forward to featuring a selection of Aguilar's work in the exhibition Unseen: 35 Years of Collecting Photographs, opening in December 2019.

The acquisition includes prints from Plush Pony (1992), a series that features portraits taken at a now defunct lesbian bar of the same name in East Los Angeles. Intimate, tender, and joyful, these photographs celebrate the sense of ease and comfort of a community that frequently faced discrimination and physical harm outside the safety of certain spaces. The Latina Lesbian series (1986-1990) engages with lesbians across various social and economic backgrounds through portraits that are accompanied by first-person narratives about their identities. These photographs prioritize collaboration and eschew the power balance between the subject and artist that is implicit in the portrait tradition.

Also included is one of Aguilar's most recognizable works, Three Eagles Flying (1990), a triptych in which she wraps her body in the national flags of Mexico and the United States to highlight the intricately intertwined issues of cultural identity and politics in this country.

Aguilar performed for the camera throughout her career and became interested in the relationship between the figure and the landscape after meeting the photographer Judy Dater (American, born 1941), whose own work has explored similar ideas. In Nature Self-Portrait (1996) Aguilar's nude body mimics the rock formations and fallen tree trunks that populate the largely arid terrain of the desert. In Motion (1999) she photographed groups of nude women, herself included, in poses that juxtapose the vulnerability of the human flesh with the rough and uneven surfaces of the landscape.

Performance artist Luis Alfaro quoted Laura Aguilar on the use of her body in her work in a 1992 essay in the gay rights publication Vanguard: I photograph the people around me—women, people of color, gays and lesbians. I wouldn't know what to do with the perfect body. Can we get comfortable with the imperfections?

All about the Getty Museum