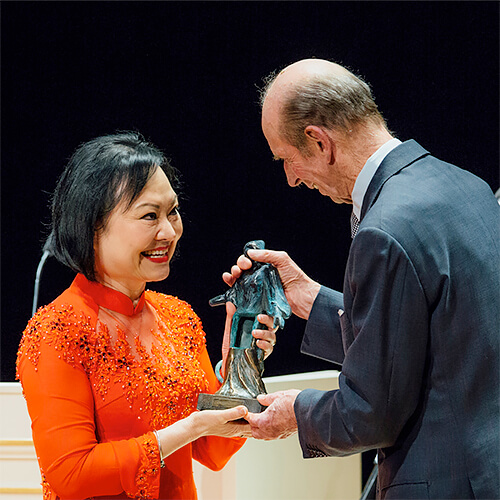 On June 8, 1972, photographer Nick Ut from the Associated Press, captured an image that would shock the world. A 9 year old girl, Kim Phuc Phan Thi, was photographed running, naked and shouting after a South Vietnamese plane mistakenly dropped napalm on her village in the midst of the Vietnam War.

50 years later, the Napalm Girl was presented with the Dresden Peace Prize in Berlin by veteran TIME photographer James Nachtwey for her work helping victims of war and terrorism.

Kim Phuc Phan Thi now lives in Canada and is the founder of the Kim Phuc Foundation, an organization dedicated to supporting the work of international organizations that provide free medical assistance to children who are victims of war and terrorism.

In 1997 she was designated as UNESCO Goodwill Ambassador for culture of peace. 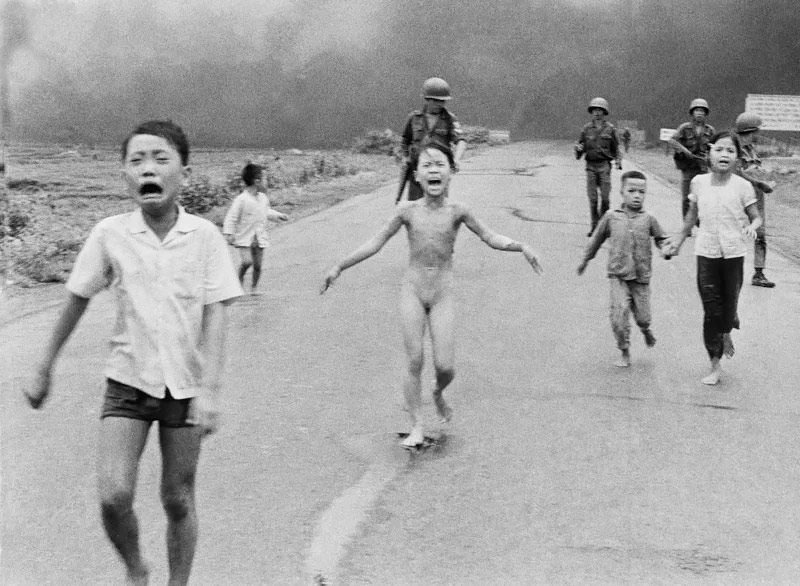 It's a tremendous honor to be here today, on this joyous occasion, to pay tribute to Kim Phuc Phan Thi. Being in the presence of such an extraordinary human being is indeed both humbling and inspiring.

Kim Phuc is famous for being the subject of a photograph - a photograph of such power that it galvanized public opinion around the world, especially in the United States, about the war in Vietnam and helped change the course of history. That she became a victim of war, that she was a child at the time, and that she was photographed were determined by history and by fate. What she has done with her life since that terrible moment has been her own doing, and it is transcendent - an affirmation of the best instincts that lie within the humanity of each one of us.

For 37 years, I've been deeply involved in documenting wars and conflicts worldwide, and I'd like to talk about what the photograph of Kim Phuc has meant to me as a photographer. In fact, it's one of the reasons I decided to become a photographer.

Wars are often characterized by dehumanizing phrases invented by politicians to divert public attention away from reality. So-called ethnic cleansing is a euphemism designed to make the conditions of genocide sound as if they are somehow clean. Boots on the ground is an abstraction, as if sending thousands of young people to fight wars, to kill and to die, is only a matter of numbers and sturdy footwear. Collateral damage is an attempt to confuse the unjustified injury and death of civilians - children, the elderly, entire families - with something no more serious than defaulting on a loan. What happened to Kim Phuc was a fundamental aspect of the war. There was nothing collateral about it. And every one of the millions of people who saw the photograph immediately related to it on a human level. The picture exploded the cynical manipulations of language that were used by political and military leaders to distort reality and to pacify resistance to the war.

Wars are also quantified in terms of statistics. What happens in war might happen hundreds of thousands of times, but it doesn't happen to numbers - it happens to people - one-by-one. Only an extremely small percentage are ever photographed, but a photograph can cut through the fog created by rhetoric and statistics and put millions of viewers on the ground, showing them what is actually happening to individual human beings.

If there had not been a photograph, Kim Phuc's personal agony would have joined that of the countless other individual Vietnamese whose suffering was unknown to the rest of the world. The fact that the moment was photographed (by the young Vietnamese photographer, Nick Ut) made all the difference. There was more power and more truth in the pain and suffering of one nine-year-old girl than in all the political spin devised by America's best and brightest to justify an unjust war. The photograph did nothing to lessen her own ordeal, and in the years ahead actually caused her personal distress. But it had a significant impact on the course of events. Perhaps, more than any other image, out of the thousands of images that were made during the war, it had a disproportionate weight in creating the critical mass in public consciousness that was instrumental in bringing the war to an end. And it stands today as an indictment, not only of the Vietnam War, but of all wars.

It's hard to imagine how difficult it must have been for Kim Phuc, in addition to enduring physical torment, to navigate the irony and injustice of all that happened, and to find a perspective that would give her equanimity. If her life had become a living symbol of war, she made the conscious decision to transform it into a living symbol of peace. She would not allow her experience to embitter her and to perpetuate animosity. Instead, she chose to let go of hatred - to understand that even though there could never be justice, she would find forgiveness in her own heart and redeem tragedy with love.

She then went further and decided to pass along to others what she has learned by becoming a goodwill ambassador for peace and reconciliation for the United Nations, and in addition, by establishing a foundation to care for war-ravaged and under-privileged children, around the world.

To have such a great soul as Kim Phuc among us is such a gift, and I know I speak for everyone here when I express our gratitude and admiration. With all our hearts, we thank you.

All about James Nachtwey