Jacqueline Walters 'Poetics of the Landscape' and 'Here and Elsewhere' 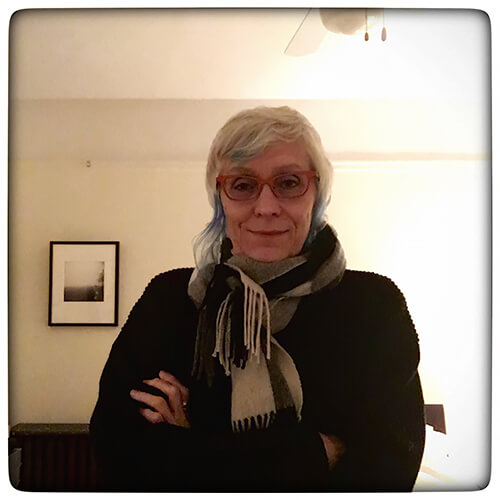 It might be close to a decade ago that Jacqueline Walters walked into RayKo Photo Center. At the time, she had a small box of prints tucked under her arm (as the years passed I noted that the dimensions of the portfolio box grew and grew). These first prints were images of a misty landscape buried in dense fog, but this wasn't San Francisco, her most recent home. This was a flat land with a creek like glass running through fields of lush grass with animals and rounded trees emerging from the mist. It's not only that the air is diffused and I have to squint my eyes to see better through the vapors. No, no, it's not just that holds me spellbound. It's also not that I can feel how the air cloaks itself around me, around the photographer, around the trees, how it sits on the ground, because despite its visual appearance, it's not heavy.

When holding the prints in my hands, the experience is more like parting a curtain and peering into a silent, shrouded world. The only moment of sound is when the tiny goats gallop up to you in the frame, their hooves barely making an impression in the dewy meadow. It is perfect that these intimate prints were shot with a plastic camera (the Holga to be exact). The edges vignetted and the pictures soft with the imperfect plastic lens. It is like I'm in an E.M. Forrester novel and I'm wading through the grasses to get to Howard's End. I can't see the encroaching city in the distance though, waiting to destroy all we know. The place in Jacqueline's photographs is preserved. Miraculously. Even when there is a road depicted in the photograph, it is as empty and still as the mirrored rivers, as if she is the only one to pad noiselessly along this terrain. I think it's Holland because it's so flat, but it could be her native England where all that great Modern literature came from and perhaps influenced her seeing too. 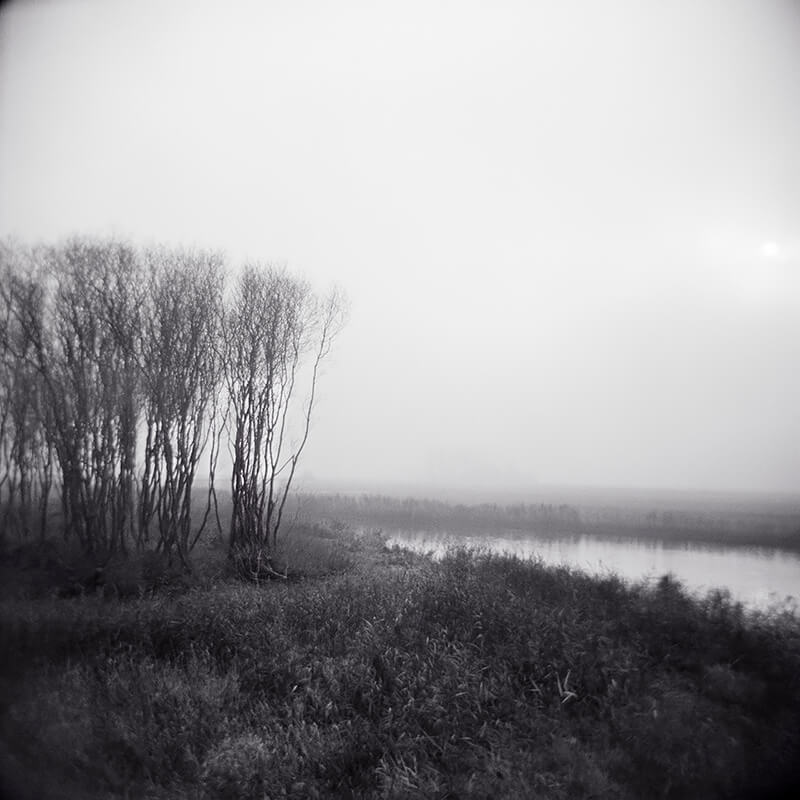 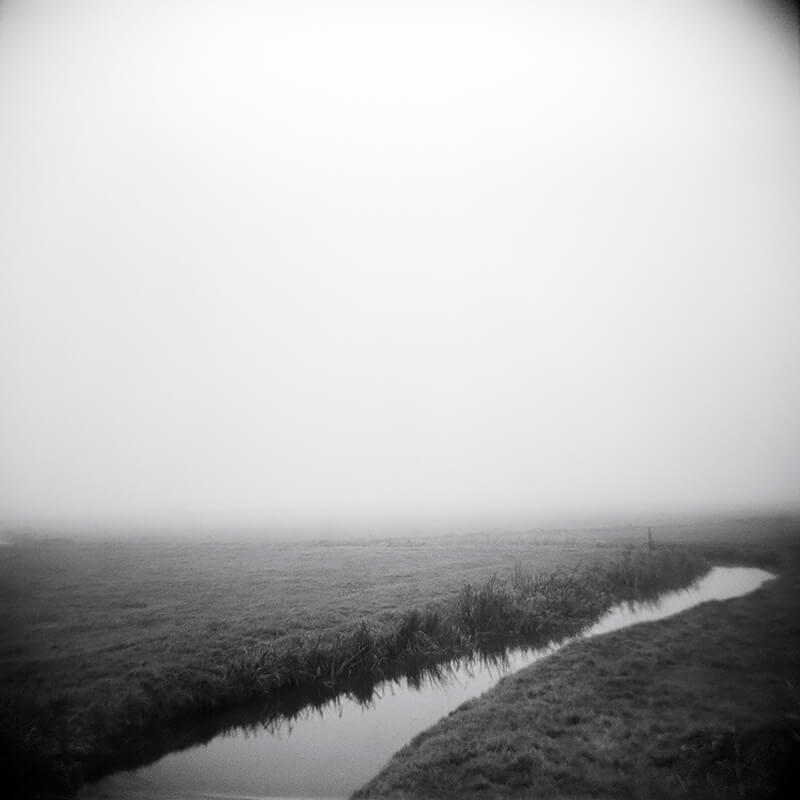 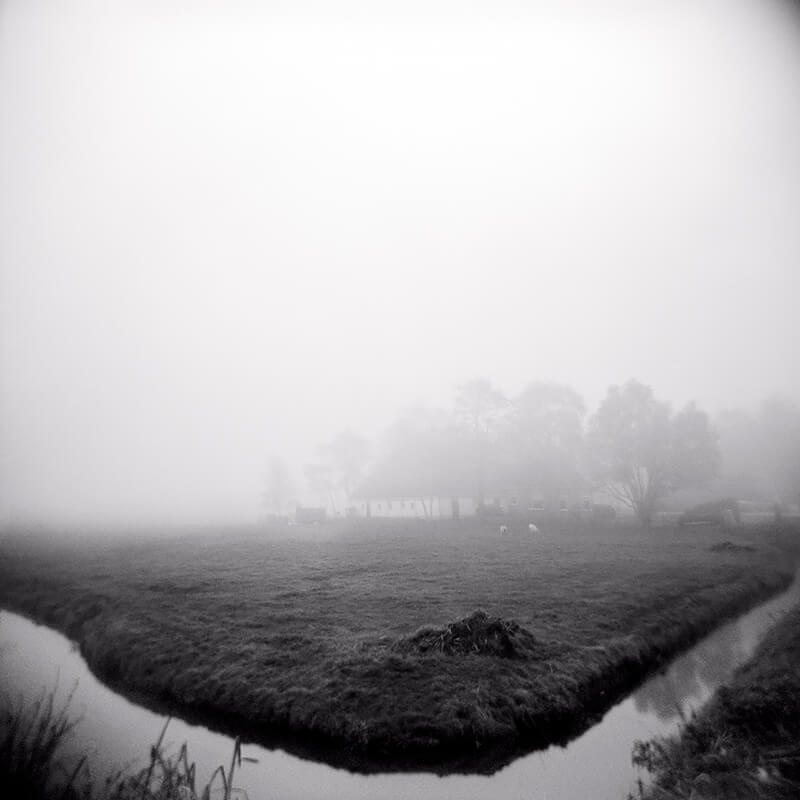 Perfectly titled, this work is called Poetics of the Landscape. I find myself wanting to spout some Yeats or Keats or maybe just find a little hillock and read some Dylan Thomas aloud for the lone horse in the field. Really, it's just us out here. But now I am perhaps rambling, brought back to this place that is comforting, purely, no sharpness concealed or revealed by this thick air and her quiet journey across the land. 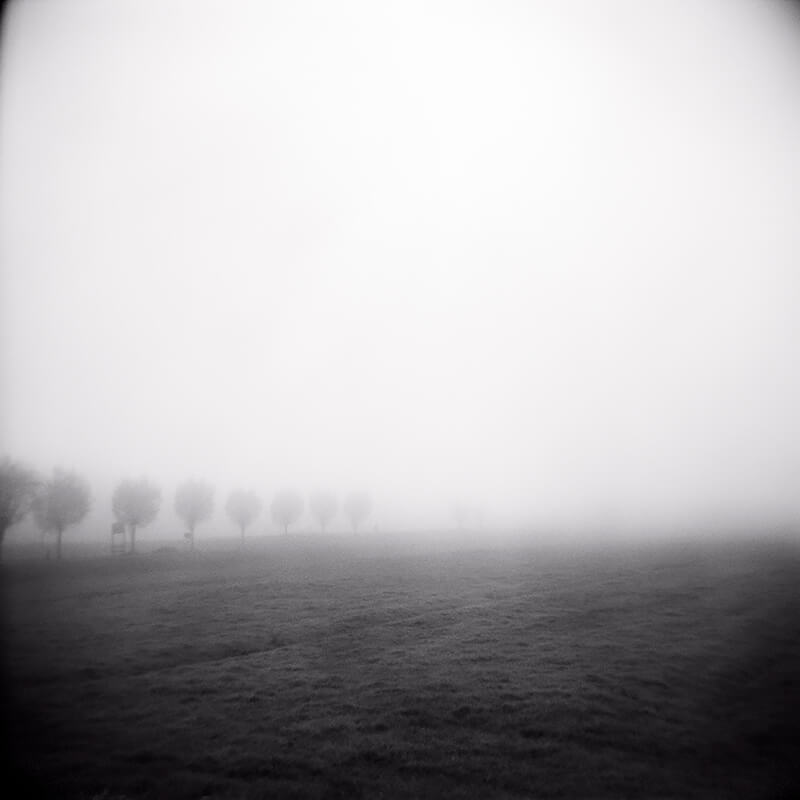 Here is what the artist had to say about this series:

Each season brings with it a certain beauty. For me that season is late autumn. At this time of the year bucolic scenes of summer give way to patterns of abstraction as the mist hovers over the countryside, both obscuring and giving form, revealing the geometry of the dormant land. The trees, having shed their leaves, become graceful silhouettes. In turn, roads no longer hidden by summer leaves become elegant lines and curves, appearing in the distance to entwine with streams and rivers like a musical chord first played by the strings and then taken up by the woodwinds. Muddy tracks become patterns of possibilities, leading not only to a destination, but also to a revelation of intricate forms. As a result of the autumn mist, I see the landscape anew.

As did I when I viewed Jacqueline's images. 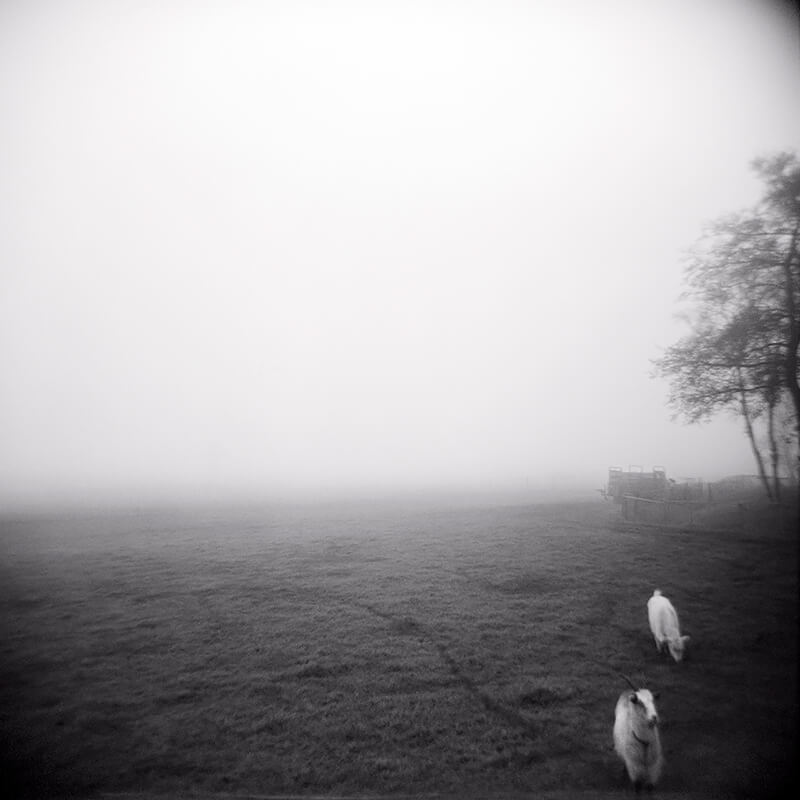 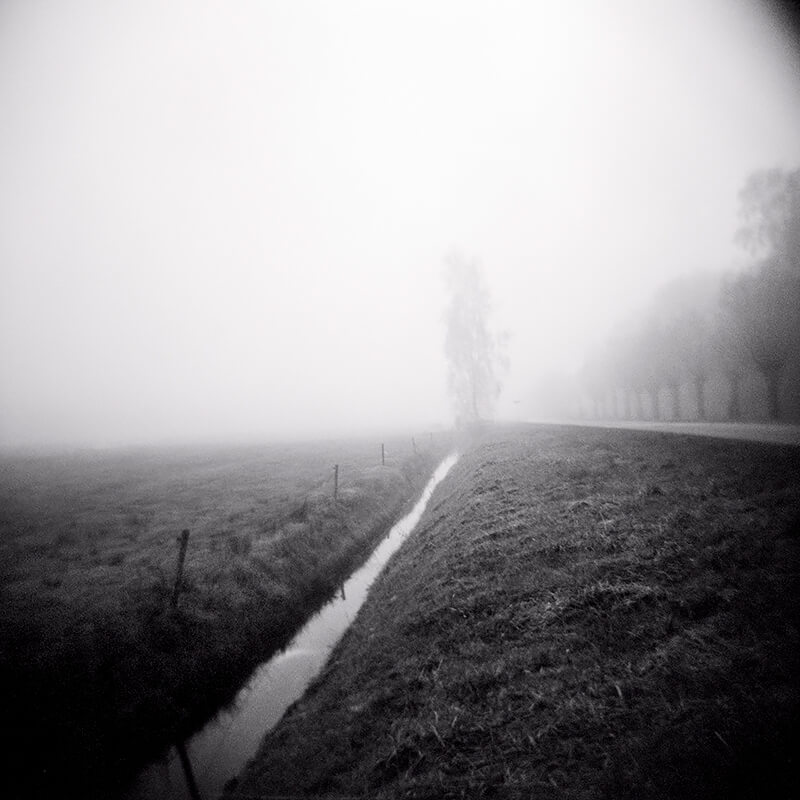 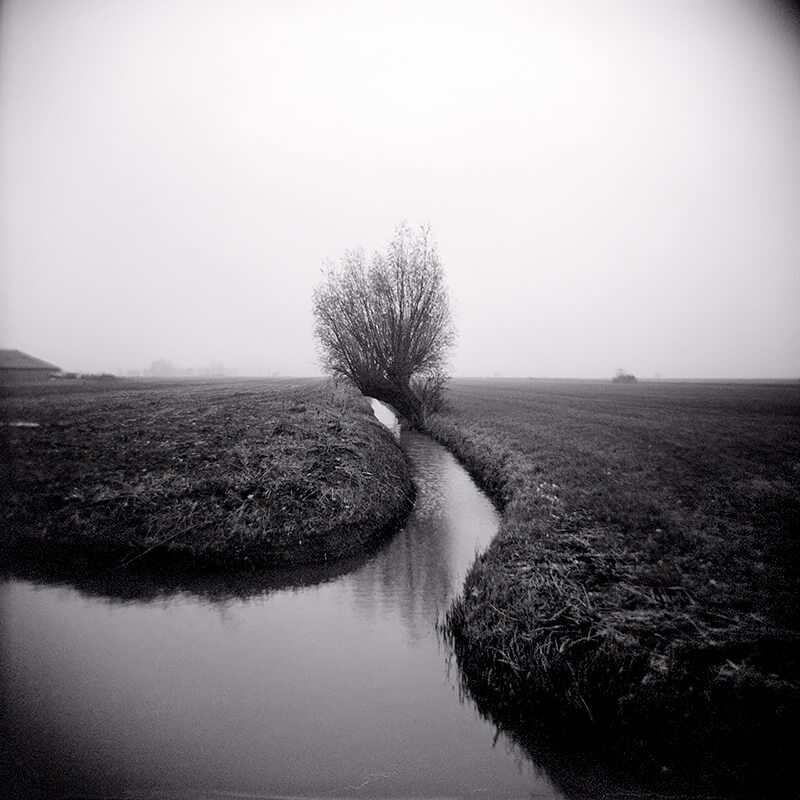 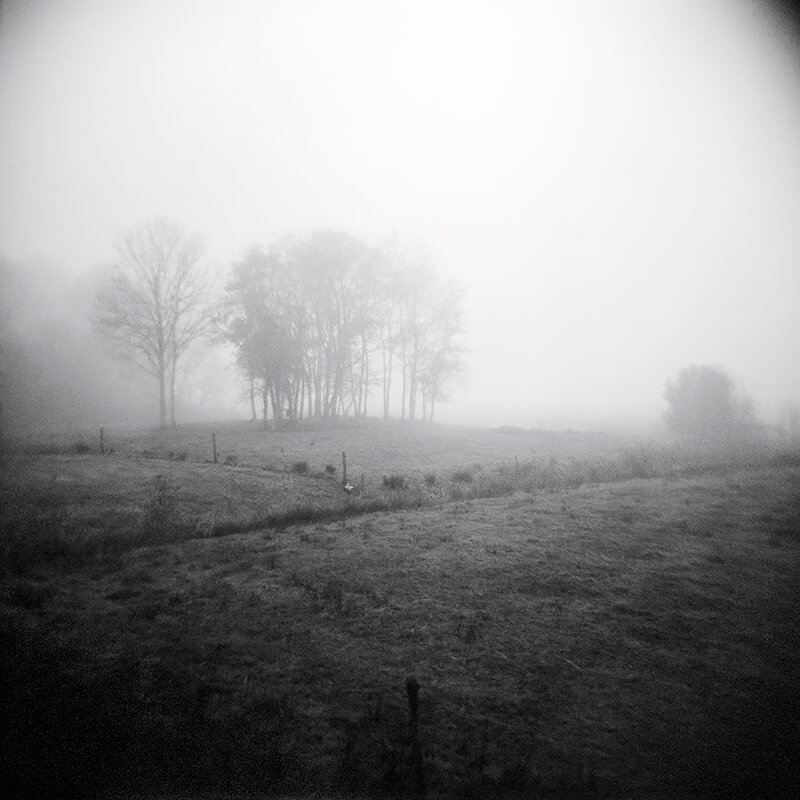 Oddly enough, the next body of work that Jacqueline brought to me was the opposite of this quiet landscape. Her long-term project, Here and Elsewhere depicts a bustling city, well, many bustling cities. Sometimes I recognize the grandeur of the great European cities. And then other times, it is a landmark closer to home. A series of highways or crosswalks or brickwork or Chinese lanterns that feels both foreign and familiar. These prints are large, the immensity of her cities filling the big sheets of paper. They are also beautifully printed B&W images from the medium format film of her Holga. The simplicity of the plastic camera allowing her to easily make multiple exposures on the same piece of film and thus arrange the scene before her to be either frenetic or surreal or strange. There are some images that seem like Atget or Kértész photographs, like a giant pair of glasses suspended in mid-air and connecting two buildings or mannequins trapped behind glass or silhouetted figures crossing a rain soaked scene double exposed with the pattern of checkerboard street. These aren't just random snapshots made with a toy camera. These pictures are well thought-out, layered and built, showing the intensity of Jacqueline's looking. There is one of great stone buildings with questionable columns and porticos sitting on top of modern cars and another of cars driving through the streets and sky simultaneously, the whole scene held up by flag poles that look like a suspension bridge. I've exhibited most of these in various plastic camera shows at RayKo over the years and have been glad to include them in the mix of images made with lo-tech cameras. Jacqueline's pictures are more than whimsical. There is a depth to the emotions brought out when traversing her chaotic city scenes...especially after you've only recently departed her poetic landscapes. Here is what Jacqueline had to say about this long-term project:

This series is not about a specific city, but rather is about my experience of the city. I thrive on the element of chance, and cities nourish this with unpredictable moments. They are a place where paths overlap and intersect, causing sensory overload as I absorb the visual feast that a metropolis offers. In the endless motion, my impressions are continually changing as one scene entwines with another producing a world that is slightly askew. The result is a complex layering of the urban landscape that is ever changing in my mind's eye.

I, for one, am looking forward to seeing where Jacqueline's exploration takes her next. It's not often I meet a modern-day Surrealist who has also inspired me to quote Yeats! 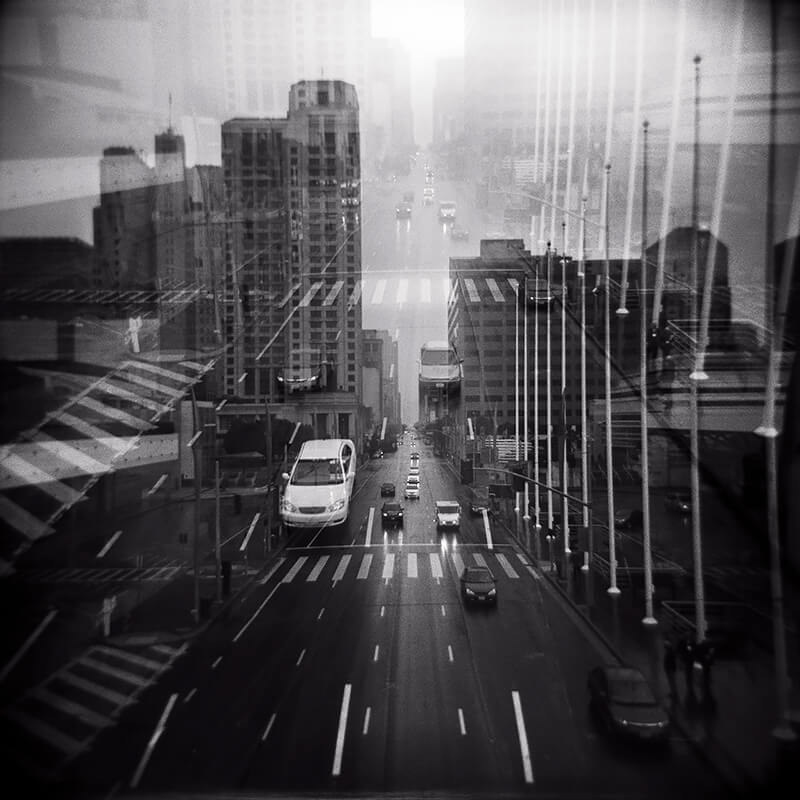 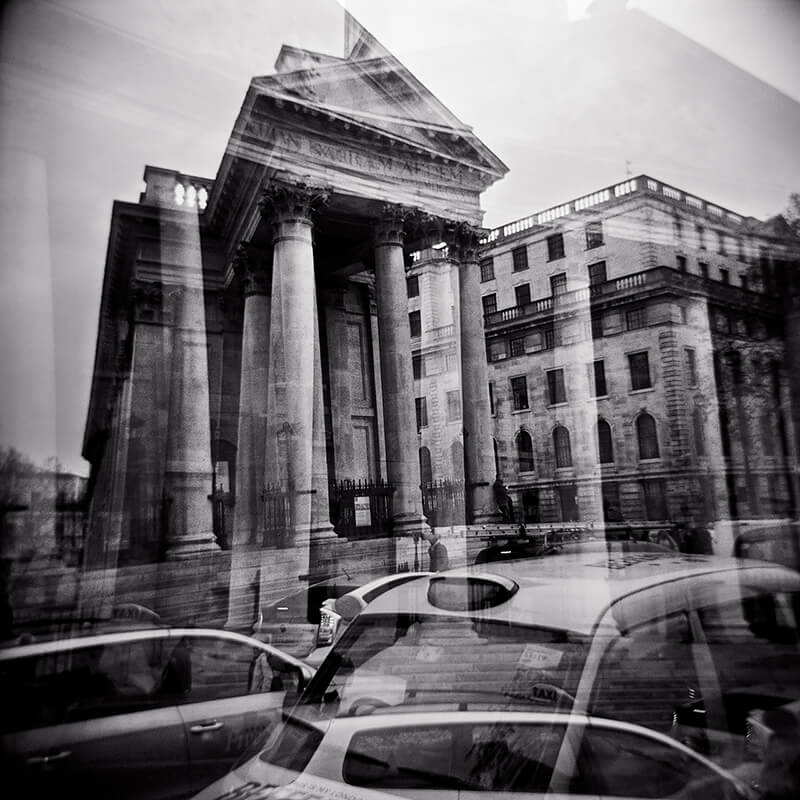 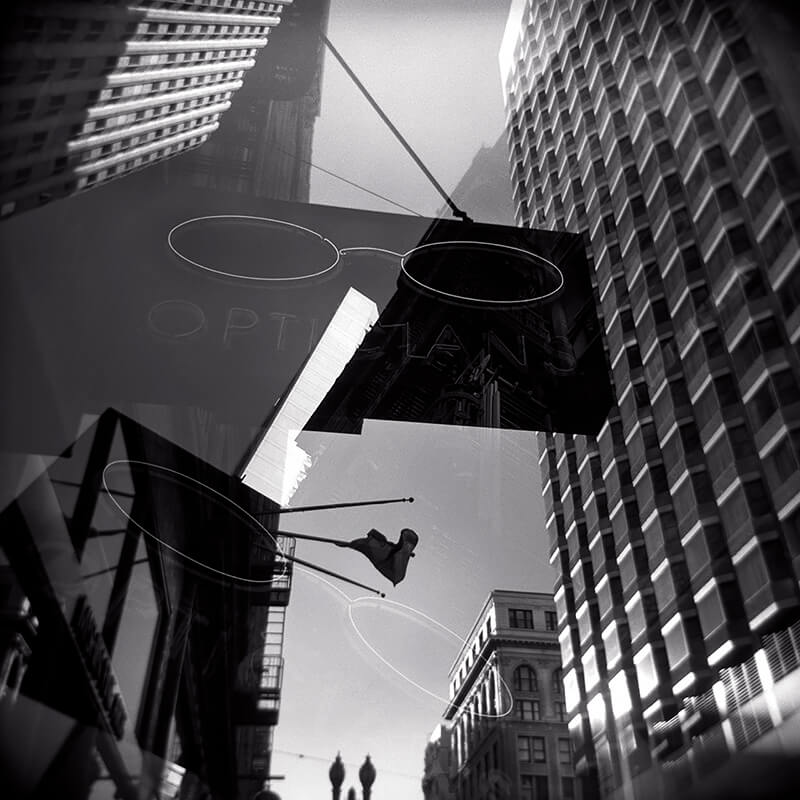 Born in Cambridge, England, Jacqueline Walters is a fine art photographer based in San Francisco. Through a passion for expatriate literature from Paris of the 20s and 30s, she discovered the world of photography. One passion turned into another as her world of words became a world of images. Thus, began her journey from the textual to the visual, from one form of story-telling to another. She allowed herself to be led in unexpected directions and began to see the world anew. She discovered that photography is about being open to new possibilities. It is about seeing, being patient, and being forever humbled. Jacqueline has shown her work in solo, two-person, and three-person exhibitions. Her work has also been shown nationally and internationally in invitational group exhibitions and juried shows. In 2014, she received a PX3 Bronze award in the Fine Art category, and in 2013 she was awarded a PX3 Bronze award in the People's Choice award. She has received many honorable mentions, including a 2013 Grand Prix Juror Award of Merit in the Landscape/Seascape/Nature category. In addition, Jacqueline was a finalist in Photolucida Critical Mass in 2009, 2012 and 2014. She has been published in Black & White Magazine (US), SHOTS, and The Photographers' Forum. 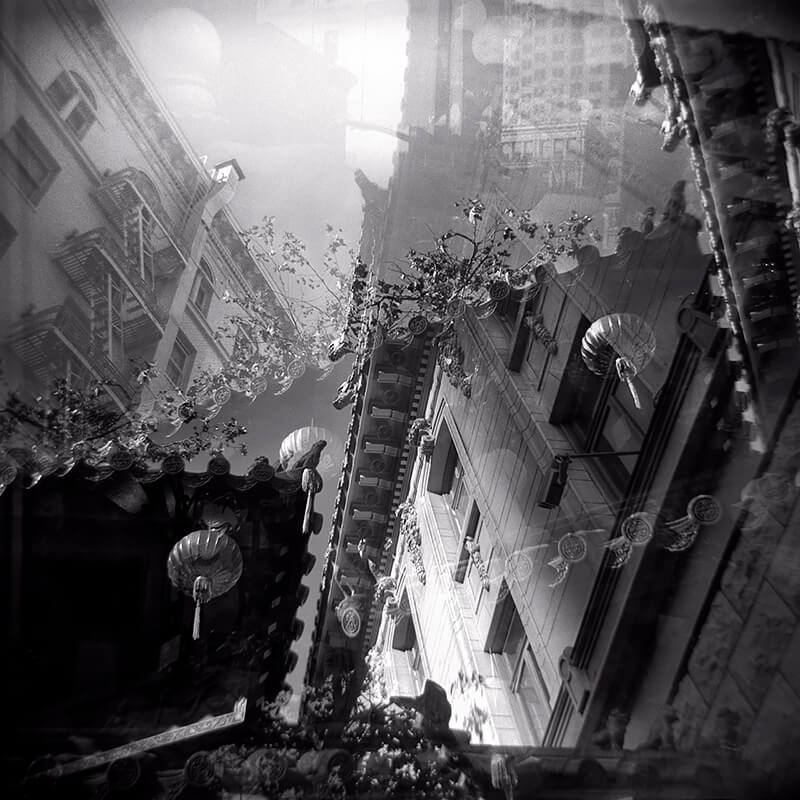