Bill Vaccaro: 'Jesus Is On The Mainline' & 'The Magic Hedge' 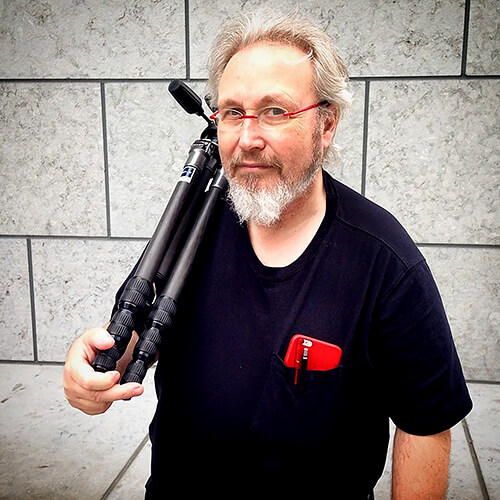 It was like this: a tiny cross on a hillside under a fairly sinister sky. Along with this: a barn in the distance seen through a corn field with REPENT painted in giant letters on the roof, big enough to be seen by a passing plane. And this: a home-made billboard that says, Hell is Real. I know that. Well, as a metaphor, I know that. I saw these pictures made by Bill Vaccaro at a portfolio review. Actually, I think we met outside of the review room at the bar, but either way, these images made me chuckle and shudder simultaneously. No small feat. I recounted a story to Bill about where I grew up, since these Midwestern landscapes of his were touching a nerve.

I grew up in upstate New York, closer to Canada than Manhattan, and on one of the state highways, maybe 8, maybe 28, maybe 20 (this one goes through Vaccaro's Illinois too), there was a sign that I would pass regularly. It was hand painted and too big to miss and on someone's front lawn right next to the road. It said in capital letters: IT'S YOUR CHOICE: HEAVEN OR HELL'

HELL was written in red flames.

When I saw Bill's pictures, I thought, Yes, I know where you're from. I'm from there too. I exhibited these images in a show called Faith at RayKo Photo Center in San Francisco. Bill arrived for the reception and in his pocket he had a tin of mints that he generously offered to everyone at the opening. The mints were shaped like tiny crosses. Perfect. 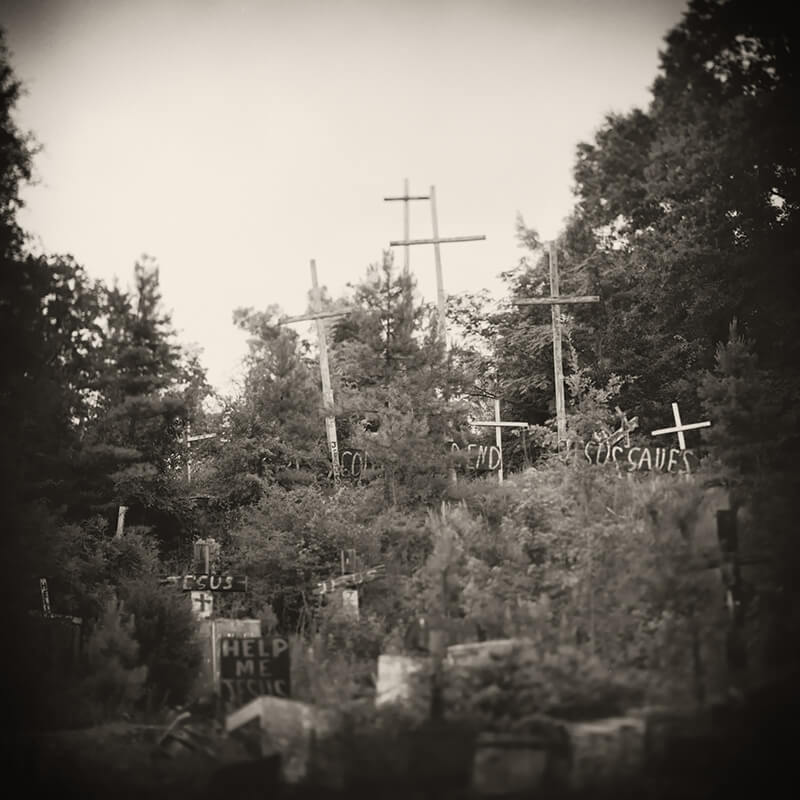 I should relate here that these pictures were from his long-term project, Jesus Is On The Mainline, one photographed in a dream-like way with toy cameras and then a Lensbaby and printed in a manner that makes these ideas about religion just frightening enough. Here is what Bill has revealed about this series:

I'm what my wife calls a recovering Catholic. I have images in my head of sleeping with a crucifix over my bed as a child. I don't know what gave me worse nightmares: The sight of a man nailed on the cross or the threat of eternal damnation.

As I grew older and began to question my religious teachings, I became more and more fascinated by the idea of Jesus and Christianity as a sociological or anthropological idea rather than a purely religious one based on faith. They are reflected in images such as a concrete statue of Christ off of a lonely two lane road in Western Kentucky or a barn in Central Illinois that proclaims Repent! to passersby. These photographs attempt to reflect that contradiction between the questioning of those beliefs with the wonder that I have for these outward manifestations of faith in Jesus and Christianity in segments of our society.

This project began with a road trip down I-55 to New Orleans a few years ago where I first came across these public manifestations of what I see as pure religious faith. It was also inspired by a blues song about having a direct line to Jesus sung by Mississippi Fred McDowell of the same name:

Jesus is on the mainline. Tell him what you want. Call him up and tell him. 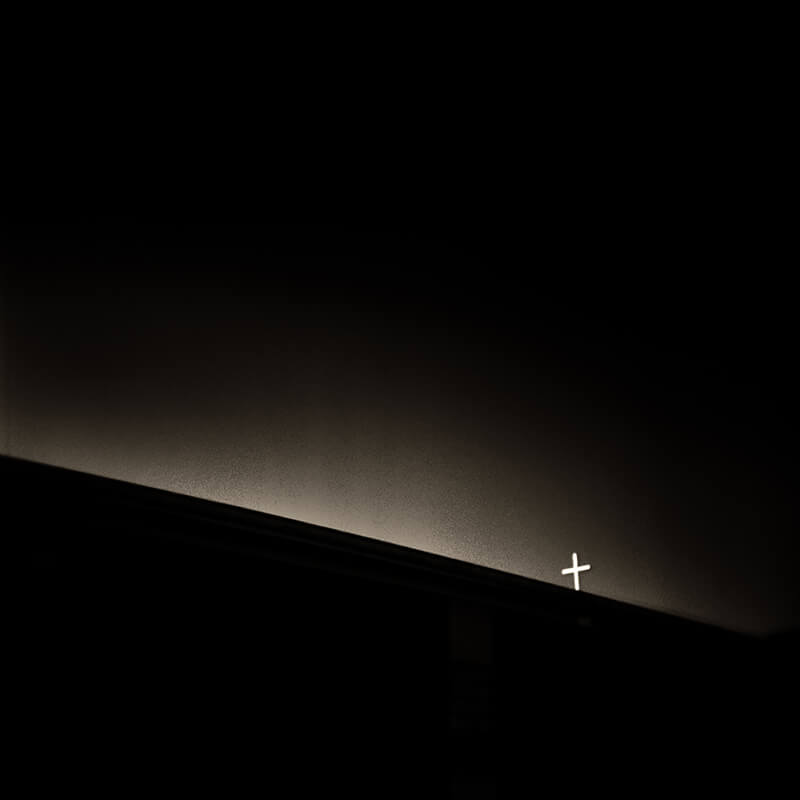 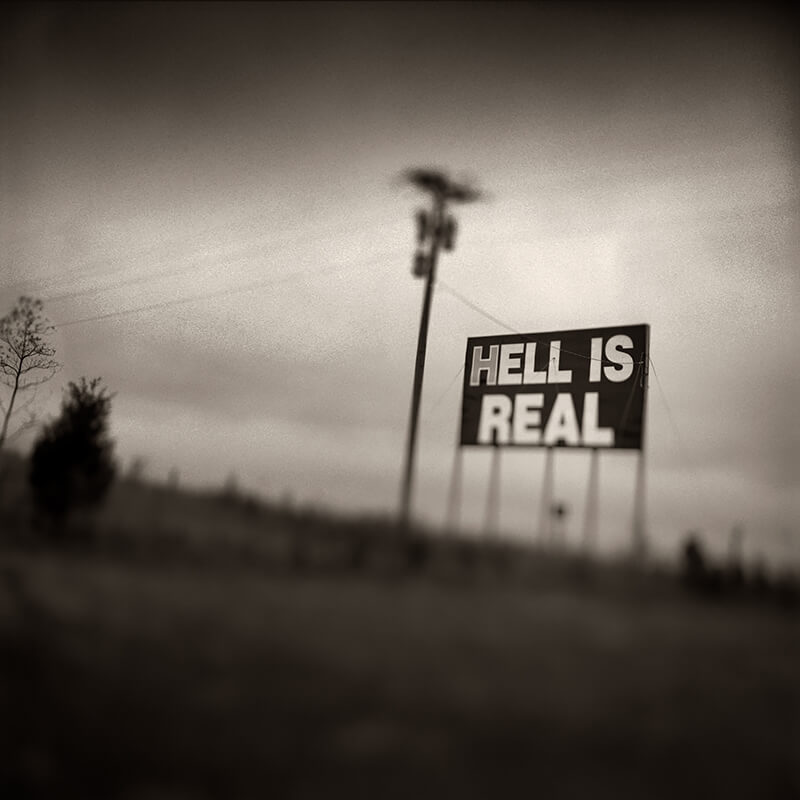 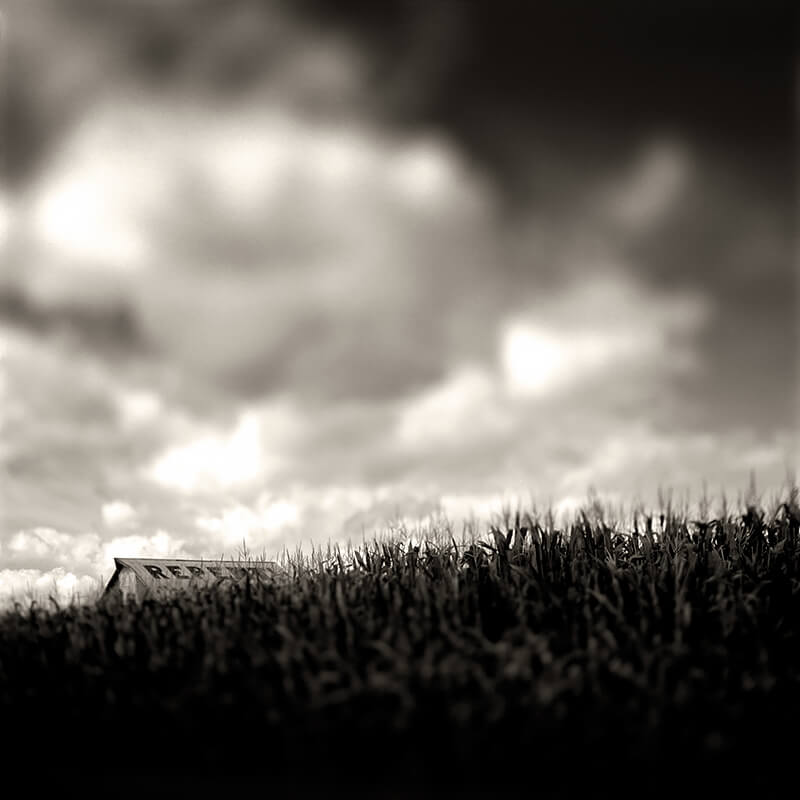 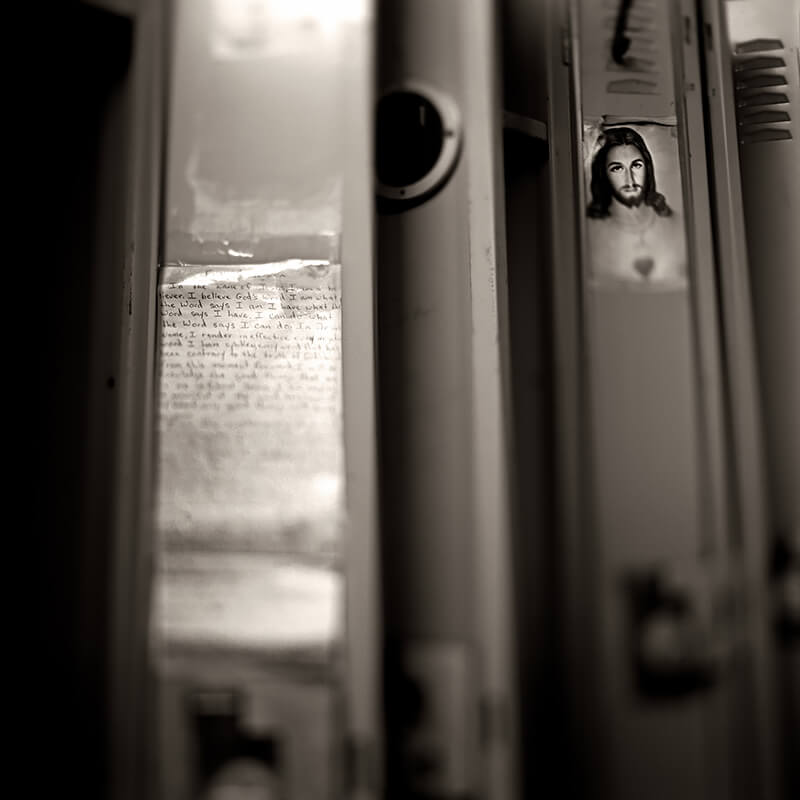 (I understood this implicitly as my parents categorize themselves as recovering Catholics too. My mother even converted without telling her parents and then my four Catholic grandparents were stunned to find a priest AND a minister on the alter at my parents' wedding. That's another story though.)

I would see Bill on and off through the next several years, each time he'd have a new body of work, unrelated to Jesus Is On The Mainline. This man is prolific and more than a bit masochistic. The next series I viewed in Houston at Fotofest. These pictures brought tears to my eyes, plates made with collodion and then printed in palladium (this is the masochistic part). It wasn't the process that made me cry, but the subject. The Things She Left Behind is about his first wife who died suddenly and the loss their young son felt and still feels. Vaccaro went into the trunk of her memories and made prints of all the things she'd left behind: diaries, quilts, baby clothes, jewelry, ticket stubs... it's too much. I found a print in my desk recently from this series, a tiny diary page that just said, Maybe in his wife's perfect handwriting. I had to contact Bill out of the blue and thank him again for this gift that unexpectedly shook me years later. And also, I needed to discover what he was working on now, because I know there is no rest for those recovering Catholics. Here is what I learned. 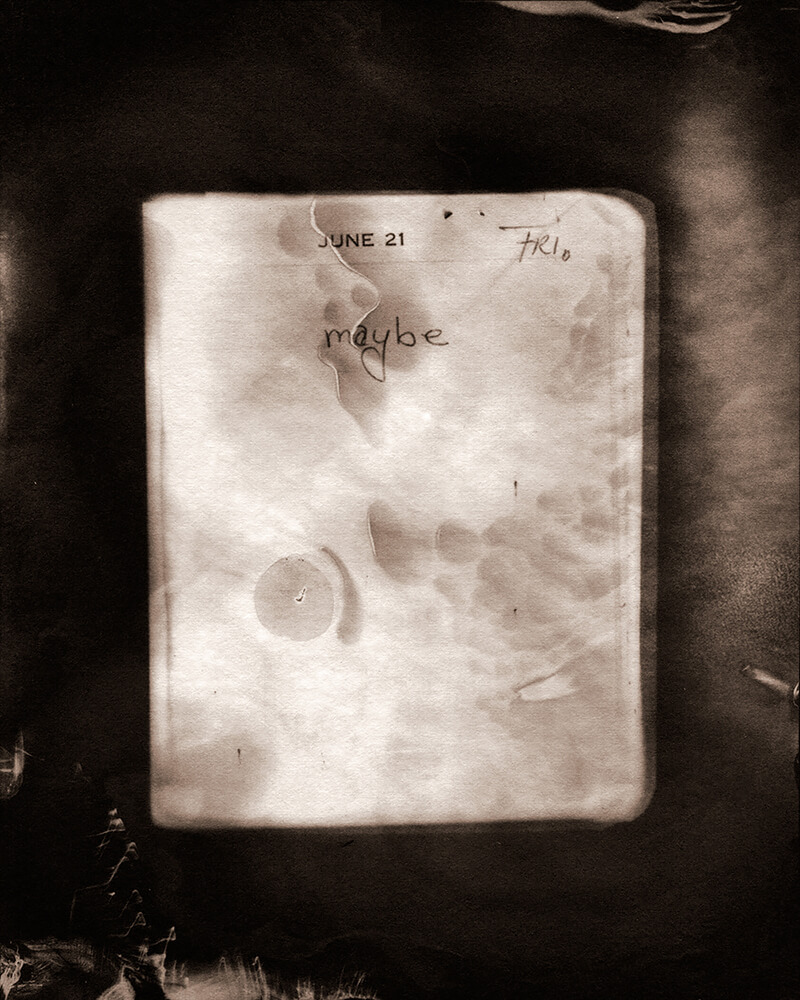 Apparently collodion to palladium wasn't masochistic enough, so this time Vaccaro got out a his view camera and coated 4x5 glass plate negatives with an 1880s silver bromide gelatin recipe and took this camera and these fragile plates into the wild. (And not just any wilderness, but more on his subject matter in a moment). After developing the plates, he scanned them and then made enlarged digital negatives and printed them out as gum prints over ziatypes. Now, I have mentioned before in another article that when I go to hell (because Hell is Real, as both Bill and I have acknowledged), I'll be making four color gum prints for eternity, so the fact that Bill is doing it by choice in this life has me tipping my hat to him.

Bill sent me some examples of this work in progress titled The Magic Hedge. Here I felt like I was looking at Alfred Horsley Hinton pictures from the early 1900s. Did Bill become a Pictorialist while I wasn't looking? It would seem so and it would also seem like a great choice for this latest project. Here is what I didn't know about the landscape that he has depicted:

In the 1930s, a 12-acre promontory was created on Chicago's north lakefront from landfill that had been dredged to construct a new boat harbor. Montrose Point, as it was officially named, was originally designed as parkland, part of the much larger Lincoln Park. That wasn't to last.

With the advent of World War II, the United States Army took over the Point for use as a radar station. By the mid 1950s, it was further developed as a Nike missile base - one of many in the greater Chicago area - complete with barracks and underground missile silos to defend the city against the threat of long range bomber attacks by the then Soviet Union. Although the silos, radar stations and barracks could easily be seen from any number of high rise apartment buildings across from Lake Shore Drive, a row of Japanese honeysuckle was planted to separate - and disguise - the barracks from the rest of the park and nearby beach. In 1974, the Nike missile program was discontinued; the silos, radar stations and Army barracks were dismantled.

Devoid of human use, the Point became a natural resting place for some 300+ species of migrating birds. Lakefront bird watchers noticed that the ragged row of bushes attracted masses of warblers and other birds during the migrations, diving in and out of the hedge like magic. It has since become known unofficially as the Magic Hedge. 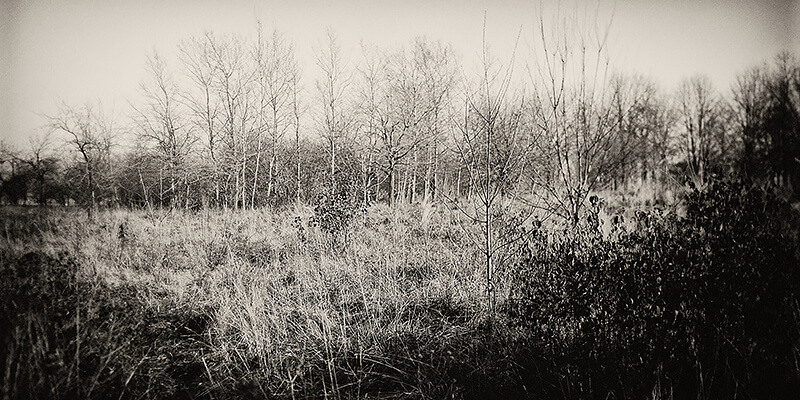 It is even replete with its own ghost tale regarding a fight between two Army soldiers and friends, Pique Nerjee and Hernando Rodrickkez. Nerjee died that night of an apparent heart attack. Rodrickkez, distraught over the death of his friend, ran off into the foggy night and allegedly jumped into the frigid waters of Lake Michigan. His body was never found. A little over a year later, the Army dismantled the base, but the two are said to be seen from time to time at night as shadowy figures around the vicinity of the hedge who look and sound like they are arguing. When witnesses approached the figures, the apparitions vanished without a trace.

I wanted to evoke the mystery of the Magic Hedge's past, sometimes strange history, and of how it transformed itself back into nature. To do that, I photographed the Hedge using glass negatives from handmade 19th century silver bromide gelatin emulsions and printed them using the ziatype palladium POP process to evoke that past.

I have to say, I am convinced of the magic. And it's also a relief to know that my geology professor was right when he said, Mother Nature always wins. 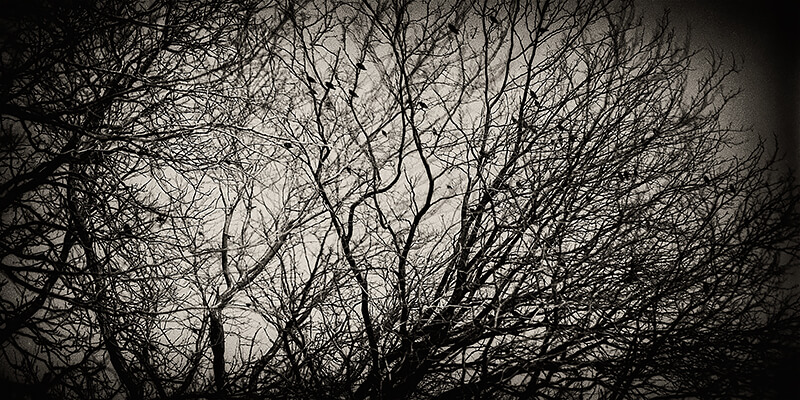 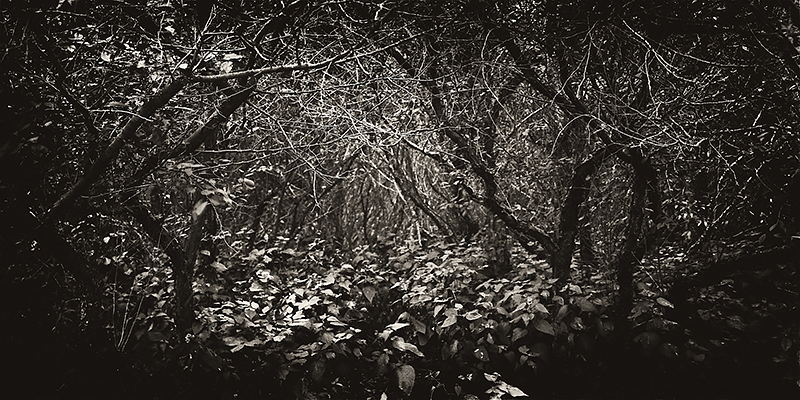 © Bill Vaccaro - Deep into the Woods 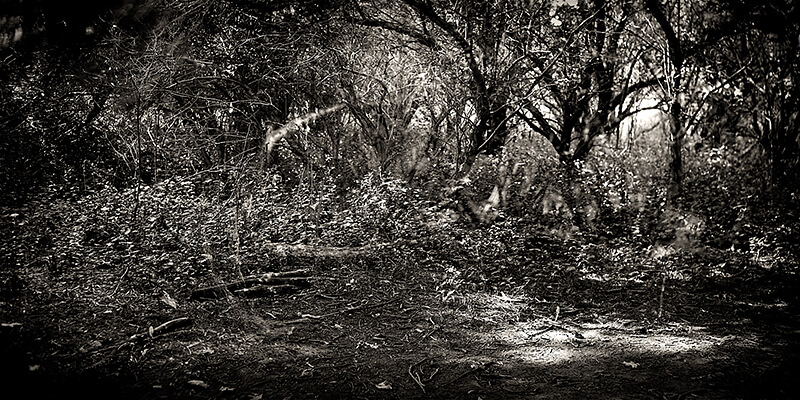 Bill Vaccaro is a fine art photographer who works in processes ranging from the 19th century to the present. His photographic interests range from studies on the way people express their faith and religion (Jesus Is On The Mainline), architecture (Gateway), personal loss (The Things She Left Behind), ghostly landscapes (The Magic Hedge) to a borderline obsession with fireworks (Boomtown).

In 2012, he was named one of the Best of the Best emerging fine art photographers by BWGallerist.com. He lives with his wife in an old, drafty money pit of a 120+ year old greystone located just a short hop, skip and jump to the murky waters of Lake Michigan on the far north side of Chicago, Illinois. He's fueled mostly by espresso and local craft beer. He also makes a mean pasta sauce.

© Bill Vaccaro - The Meadow in Winter