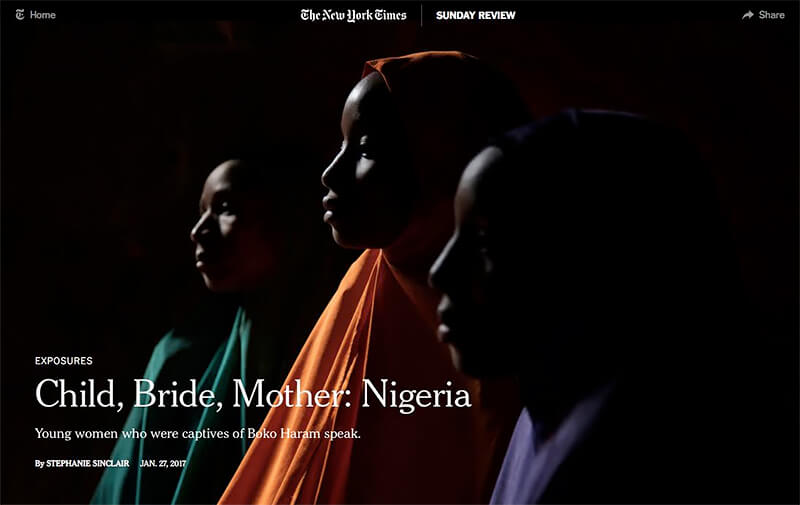 Young women who were captives of Boko Haram speak

Too Young To Wed is proud to announce the release of Child, Bride, Mother: Nigeria, our newest multimedia collaboration with the Ford Foundation and the New York Times Sunday Review.

Three years after 276 schoolgirls in Northern Nigeria were abducted by separatist militants, Boko Haram, the global call-to-action Bring Back Our Girls has all but disappeared from social media, the public's interest waned.

Dada, 14, holds her 18-month-old daughter Hussaina at their home, where she lives with her mother. Dada was abducted with her older sister when she was just 10 years old, and forced to wed a Boko Haram insurgent. We gathered under a tree and married, Dada told me last November. I felt like a living ghost, she said. I was not afraid to escape, being alive in that camp was already the worst thing that could happen to me.

But it's now become clear that the Chibok abductions were just one instance of a profoundly disturbing tactic: child marriage used as a weapon of war - a practice that has lead to the kidnapping of some 25,000 girls in the region.

Our presentation includes photographs and personal statements from formerly kidnapped girls, now returned to an uncertain life in urban Nigeria; and culminates with a short film highlighting one girl's harrowing journey.

And for a look behind the scenes of this production, check out my interview with National Public Radio this weekend.

Also, just a reminder that the Global Giving campaign to fund our Adolescent Girls Photography Workshops is still underway. We are in the process of planning a workshop for late 2017 with the girls featured in this project.

After graduating from workshops, girls will have newfound confidence and respect of their communities. They will have tools to manage their personal trauma, serve as role models for other girls, and mobilize their communities to end child marriage. Please GIVE TODAY

Thank you,
Stephanie & the TYTW Team

Too Young To Wed