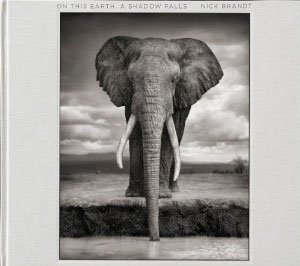 Since they were photographed, many of the elephants in this book (On This Earth, A Shadow Falls) have been killed by poachers. The 49 year old elephant drinking on the cover, so trusting to allow me this close, was killed two years after I took this photo. The leading matriarch in Elephants Walking Through Grass, was also killed the same year.

From 2008, the poaching of animals, especially elephants, has dramatically escalated across much of Africa. There has been a massive increase in demand from China and the Far East; ivory prices have soared from $200 a pound in 2004 to more than $2,000 and counting today. It is now estimated that in excess of 35,000 elephants a year are being slaughtered, 10% of Africa's elephant population each year alone.

The killing is not limited to elephants. There are now just 20,000 lions left in Africa - a staggering 75% drop in just the last 20 years - to the point that now no lions left outside protected areas. Most of this is due to conflict with the fast-growing population, but increasingly, it is for body parts, again for the Asian market. Rhino and cheetah populations are also dropping precipitously. Giraffes, zebras and many other plains game in the region are being killed still more rapidly for bush meat.

All in all, there is a continent-wide apocalypse of animals in full force.

No longer able to sit back and allow the destruction to continue, I co-founded Big Life Foundation in September 2010 with one of the most respected conservationists in East Africa, Richard Bonham. With one of the most spectacular elephant populations in Africa being rapidly diminished by poachers, the Amboseli ecosystem, that straddles both Kenya and Tanzania, became Big Life's large-scale pilot project.

Today, three years later, Big Life is the only organization in East Africa that has co-ordinated anti-poaching teams operating on both sides of a country's borders. The animals don't pay attention to borders. Nor do poachers. So neither can we.

310 fully-equipped rangers in 31 outposts now protect two million acres of the ecosystem. With the aid of multiple patrol vehicles, tracker dogs (the first to be used for conservation in Tanzania), night vision equipment and aerial monitoring, this new level of co-ordinated protection for the ecosystem has brought about a major, dramatic reduction in poaching of ALL animals in the region, with numerous arrests of some of the worst, most prolific long-term poachers in the region.

However, when you're trying to protect close to two million acres, 310 rangers will only get you so far. These achievements could never have happened without one critical element: The collaboration with, and support of the local communities.

Wildlife is constantly moving far beyond meager park boundaries into the huge unprotected areas ever more populated by humans. This means that the only future for conservation of animals in the wild is working closely with the local communities. This is at the heart of Big Life's philosophy:

Conservation supports the people, and people will support conservation.

Indeed, we believe that this approach can be the only future of conservation in East Africa.

Meanwhile, the poaching continues unabated, out of control, in the areas where Big Life still has no presence. When the goal of stable and sustainable operations long term has been achieved in the region, the goal is to start allocating funds to other areas in East Africa urgently in need of dealing with this growing poaching crisis.

At the current rate of killing, within the next ten years, the elephants, rhinos, lions, cheetahs will be gone, mostly left only to be seen in zoos. If we just wait for the tortuously slow wheels of government to try and effect change on the international level - by effectively enforcing bans on trade, by curbing demand for these animal parts - if we wait for that and do nothing, all these animals will be long, long gone.

In the meantime, out of critical necessity, Big Life Foundation is working hard, and so far successfully, to urgently staunch the flow of blood, and preserve these extraordinary animals in the hopes of a better future for both them, us and the planet.

I began Big Life three years ago because I saw that something positive could be done. There's little use being angry and passive. Much better to be angry and active.

So will you join us in being angry and active? Please donate generously to help continue our success at: Big Life Foundation