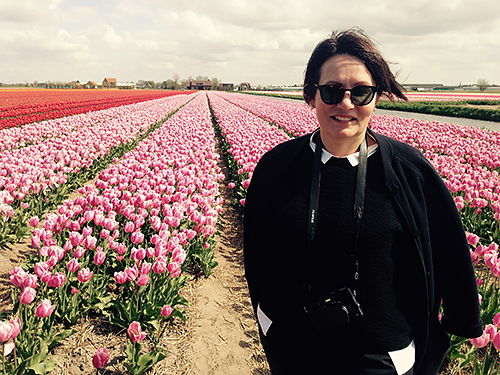 To walk into a big factory space turned into a massive gallery in an ancient walled city in China is one thing. To walk in and see an artist's work whom I had shown back in 2010 is another. I had met Lucia Ganieva back in 2008 at Fotofest in Houston. She had several portfolios, each more compelling than the last. One about iron mules (motorbikes with side cars), one about women who guard the art at the Russian museums, and one about factories. I exhibited all three projects at RayKo Photo Center nearly 7 years ago now. But here at the Pingyao International Photo Festival (PIP for short), the curator and artist, Thomas Kellner wisely selected Lucia's factory pictures to be exhibited in the old diesel factory. Perfect.

Lucia's pictures are not just images of machines and metal. That is one component. They are actually triptychs, one photograph of the massive machine, one of the woman who runs that machine, and one of the fabric that is being made on the machine. The women themselves wear these patterned dresses that look like they probably were made from the cloth that came off these machines. The way that Kellner laid out the gallery, you walk into the building and there you see a bright yellow wall with Lucia's factory worker staring back at you flanked by her machine and her product. The effect is one to pull you into the space and explore the exhibition. Lucia's images are hung in the center of the gallery on colored walls that match the artist's vibrant prints. The images that fill the surrounded space are also industrial, but they are more massive in scale (some of the artists and projects include Jamey Stillings' solar fields, Ferit Kuyas' industrial interiors, Claudia Fährenkemper's surface mining equipment...). The result is to pull you back into the bright center with Lucia's women staring back somberly at you, almost saying to the viewer, What have you done? Kellner titled his exhibition Glitter and Dust, a nod to the changes on our planet and to our environment and its uncertain future.

With each of these artists' photographs are huge text panels describing their projects in Mandarin and Cantonese. Here is an excerpt from Lucia's panel:

Factory is the name of a series of triptychs about the textile factories in the town of Ivanovo, some 300 kilometers from Moscow. The town is also called the Town of Brides for its many women working in the town's textile factories. Ivanovo used to be the center of Russia's textile industry. There were dozens of buildings where the women of Ivanovo produced the most beautiful fabrics, mostly cotton and linen. They took care of the whole process from start to end product. Now, due to strong competition from other countries where the costs of labor are low, only a handful of factories are operative and are mainly involved in bleaching and printing the fabrics.

By combining images of the factories' interiors, the fabrics themselves, and the women who produced them, Lucia wanted to compose a portrait of the factory, thus saving these last remains of an industrial era that is about to disappear.

Lucia Ganieva was born in Russia and has lived in the Netherlands since 1993. She studied photography at the Foto Academie Amsterdam and graduated with honors in 2007. Since then her photographs have been exhibited in many places worldwide. In 2010 she had exhibitions in Utrecht (Holland), Madrid (Spain), Odense (Denmark), Seattle and San Francisco (USA) and Zagreb (Croatia). In 2013 there have been shows in Berlin (Germany), Reggio Emilia (Italy), Odense (Denmark). In 2016 Lucia's work was shown in Zwolle and Amsterdam (The Netherlands). Over the years she received a lot of other awards and nominations. Lucia is most successful with photographic series containing portraits of people in their environment. By means of portraits of people and their space, she wants to illustrate social issues. Most of her work is made in Russia because of her roots and her strong connection with the Russian people and society.