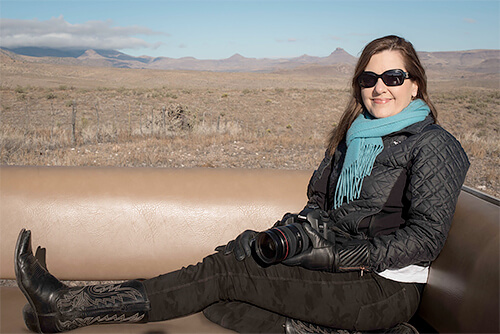 I don't want to rely on talking an intruder out of killing me or my loved ones, Lee Ann said as she skillfully loaded the magazine into her Beretta.

I was recently at the FotoFest 2016 Biennial in Houston and was thrilled to have Shelley Calton sit down at my reviewer table with not just her book, Concealed, but a box of gorgeous color prints. There were stories for each of the portraits, riveting stories to match the gripping images. There had been a buzz in the reviewer break room about these pictures of women with guns. Having seen a few such projects in the past and having worked with my good friend, Cathryne Czubek, on her film project, A Girl and a Gun, I was wondering just how good these pictures could be. As it turned out, they weren't just good; they were great.

The women in this collection of portraits have chosen to own handguns for protection. The majority of them have been through training to obtain licenses to conceal and carry their guns in public. They are ready to face an attacker, take aim and pull the trigger. 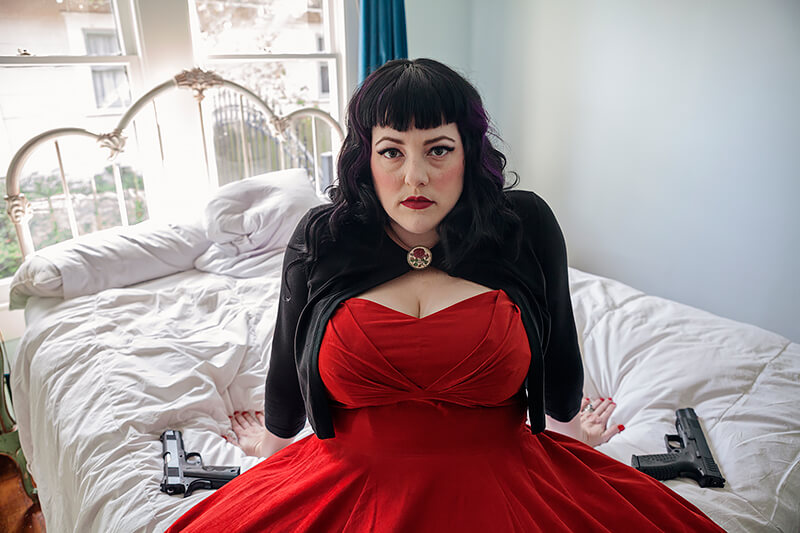 Each of the women in this series has her own unique backstory that has motivated her decision to carry a concealed weapon. Some of the women have had incidents in their past, and others have been threatened and they now feel the need to own a handgun for self-defense. Many of the women that Shelley Calton photographed grew up immersed in the Texas gun culture, and to them, guns are a form of cultural expression deeply embedded in a family tradition and passed on from generation to generation. In this respect, the artist understands the rich history and stories that can accompany these sentimental objects, as well as the sense of security they can provide. Calton shares a common ground with these women. As a child, her family owned shotguns and rifles for sport, and her father kept a handgun in his nightstand. Calton's father taught her and her sisters to shoot at an early age. 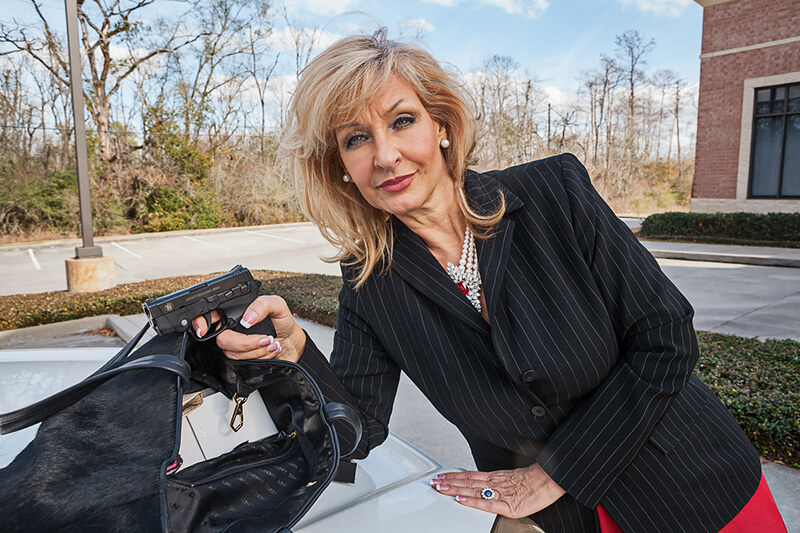 I grew up in a very different place: New York with my liberal parents who were very opposed to guns and would never dream of owning one let alone handing one to their daughter. Curiosity got the best of me though. Fifteen years ago when I was living in Los Angeles, a friend from Sweden came to visit and I asked him, What would you like to do while you're here? His response was, I heard that in America anyone can shoot a gun. Well, I didn't know, but soon found out that it was possible for us to go to a range and get a training and shoot a revolver at a target. And I liked it. A lot. Enough that when I moved to northern California, I found that every range here has a ladies' night where ladies get free gun rental and free lane rental. Many of my female friends and all my visiting artists from abroad were brought out for ladies' night at the range. It was always fascinating to see who was there, such a cross section of women from grandmothers with their granddaughters shooting rifles to women in tiny sequined skirts, tube tops and stilettos, to me and my friends who were usually dressed in jeans and t-shirts and pretty competitive about who would have the best target at the end of the night. But really, besides being visually compelling, the power and strength emanating from those lanes was palpable.

Last week, the son of that same Swedish friend came to stay with me here in the liberal bastion of America as my brother always called San Francisco. I took him to the gun range as I had taken his father all those years ago. This trip to the range with his teenage son was very different though. We took a lengthy gun safety training course and our instructor was a woman. She wore a pink vest and lots of jewelry and she was tough and smart and attractive and an excellent teacher. (I'll never pick up a gun with my finger on the trigger again. Ever.) The Swedish teen was impressed. His idea of guns in America was very different from the one this woman presented to us. After we shot our targets (it turns out the kid is an excellent shot), I shared Shelley Calton's book with my shooting partner. We both thought our pink vested teacher, had she lived in Texas, would be an exemplary addition to the series.

In Concealed, Calton's images of these women with their guns can be startling. Guns are typically envisioned in the hands of men, not mothers and grandmothers. Guns are powerful and polarizing. They can both take a life or save a life. 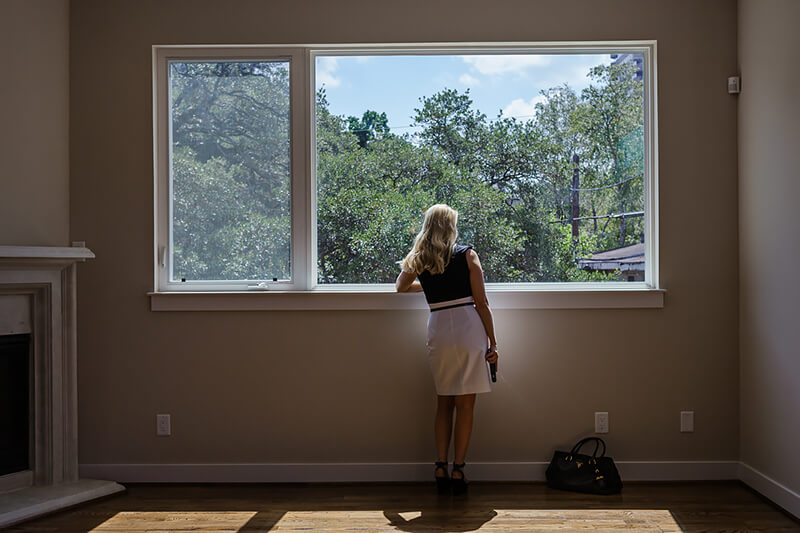 Calton considered photographing the women and their guns separately but felt that it was imperative to allow these women to expose a portion of their identities that is regularly concealed. It was also important to capture how each woman holds her gun, how she relates to it and where she keeps it at home or carries it on her body.

On a very basic level, the women in this series own a handgun for protection, but the bigger question is, why? This question was at the core of Calton's photographic investigation. She found that gun ownership gives women an opportunity to make a bold statement: They refuse to be vulnerable and victimized. They decry the myth of the helpless woman and instead project an ethic of unapologetic self-reliance.

Much of the opposition Calton has faced in this project insists that the women in the photographs are insecure, careless and paranoid. To that, the photographer would ask, what makes them this way? What kind of society are we living in that in order for a woman to go to bed and feel safe she needs a gun tucked beneath her mattress? The public has grown accustomed to seeing guns in the hands of soldiers and police officers but are quick to criticize when they are in the hands of a defenseless woman.

Indeed, an ideal world would be free from fear, and no one would need a gun. But in a society in which the overwhelming majority of sexual assault and domestic violence is against women, these images portray women in a role of taking self-protection into their own hands.

The gun control debate and issues around it have been raging in the United States for a long time. Continuing tragic events that surround us in the media fuel the conversation. Political views aside, Shelley Calton's intention for this project is to give the viewer a glimpse into a subculture of Texas women that will not become victims. If you want to see Shelley Calton's dynamic portraits of these women, the Houston Center for Photography will be hosting an exhibition and book signing in September of 2016. If you can't wait until then, which I can't, you can pick up your own copy of her book here. 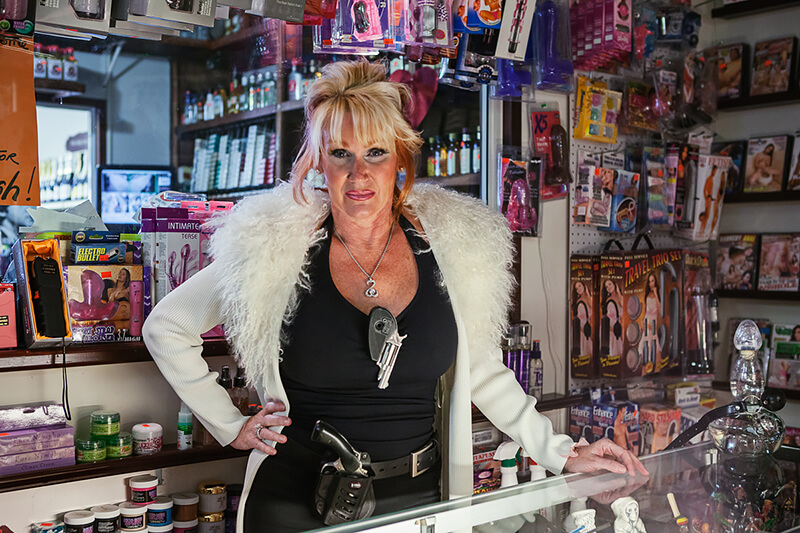 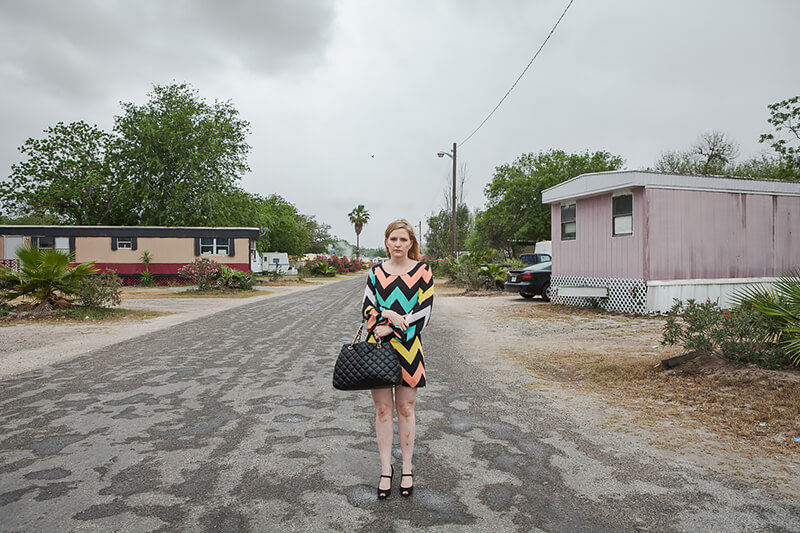 Biography
Throughout her practice, Texas-based photographer Shelley Calton has made it her niche to reflect on the collective female experience and the resulting subcultures, whether it is photographing roller derby girls or the delicate artifacts associated with femininity. Her first book, Hard Knocks, Rolling with the Derby Girls was published in 2009 and her second book, Concealed, She's Got a Gun, was released in spring of 2015. A portrait from Concealed was chosen for Taylor Wessing Prize at the National Portrait Gallery London as well as the Royal Photographic Society International Print Exhibition in 2015. Thirty images from Concealed were exhibited at Zoom Photo Festival in Quebec in October 2014. Her work is in the collection of the Museum of Fine Arts Houston, National Portrait Gallery, London, as well as private collections. Featured articles and interviews have been written in The New York Times Lens Blog, Daily Mail.com, Japanese Newsweek, Texas Monthly, ABC.com, American Photo, and global, live interviews on BBC World Service and BBC America.